Landfill gas produces ozone precursors such as nitrogen oxides and formaldehyde when combusted in flares or stationary engines. Solid waste landfills are also the third largest anthropogenic source of methane in the United States. Methane is both a greenhouse gas and a tropospheric ozone precursor. Despite its low photochemical reactivity, methane may noticeably affect urban ozone if released in large quantities along with other organic compounds in landfill gas. A fine-scale 3D Eulerian chemical transport model was used to demonstrate that, under meteorological and background chemical conditions conducive to high ozone concentrations, typical emissions of ozone precursors from a single hypothetical landfill may result in persistent daytime additions to ozone of over 1 part per billion (ppb) by volume tens of kilometers downwind. 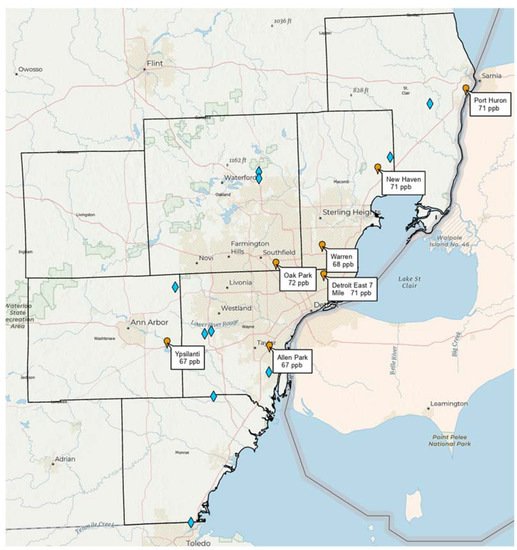 Results are first presented for the near-source simulation. Figure 2 displays surface concentration isopleths for ozone and key ozone precursors (NO, NO2, HCHO, CH4, and PAR) at the end of the three-hour simulation period for the Baseline scenario. 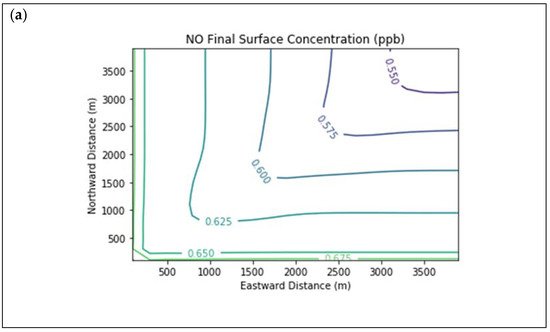 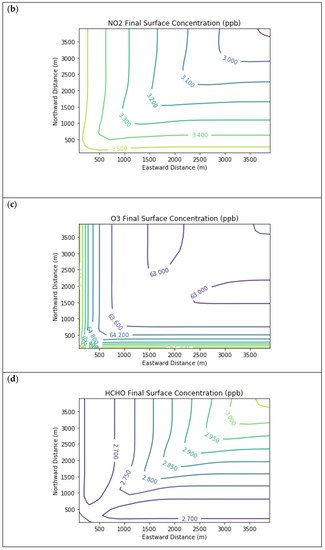 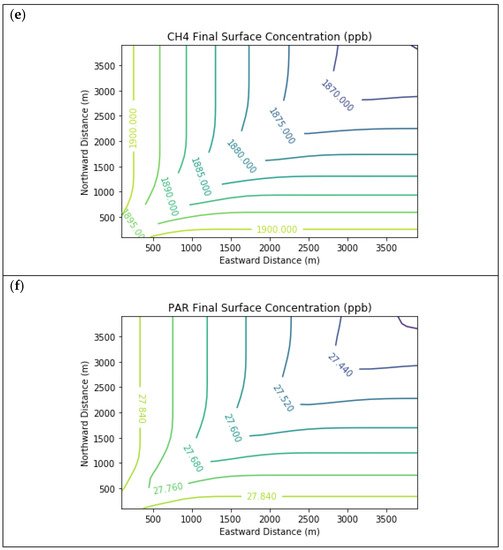 Figure 2. Near Source: Baseline Scenario.Final surface concentrations of (a) NO, (b) NO2, (c) O3, (d) HCHO, (e) CH4, and (f) PAR at the end of the 3 h simulation in the Baseline scenario for the 4 km × 4 km domain.
Note that the downwind ozone concentrations were below the inflow level of 70.3 ppb because of dry deposition within the model domain, as well as some titration of ozone by incoming NOx. Downwind HCHO was increased above the inflow concentration of 2.84 ppb due to secondary formation by decomposing incoming organic species.
Figure 3 presents the end-of-simulation differences from the Baseline scenario due to landfill combustion sources in the Combustion Only scenario. Landfill NOx emissions increase the titration of ozone near the source, hence the negative contours in the ozone isopleths in the vicinity of the NOx enhancements. Incomplete combustion also significantly increases near-source formaldehyde exposure, with a peak enhancement of 0.68 ppb above the baseline concentration. 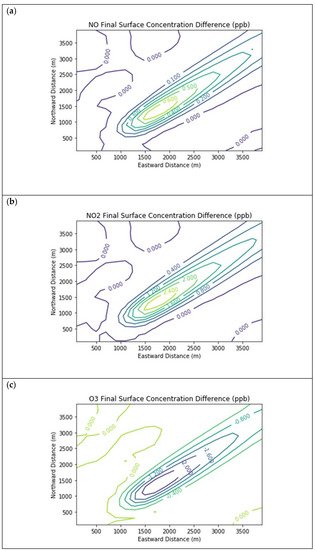 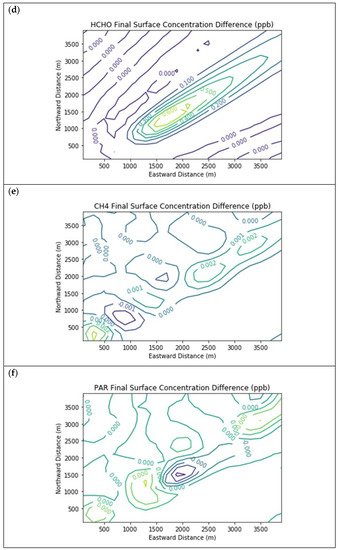 Figure 3. Near Source: Combustion Only ― Baseline. Difference plots of (a) NO, (b) NO2, (c) O3, (d) HCHO, (e) CH4, and (f) PAR between the Combustion Only and Baseline scenarios at the end of the 3-h simulation for the 4 km × 4 km domain.
Figure 4 presents the end-of-simulation differences from the Combustion Only scenario due to the addition of fugitive emissions of methane and NMOC in the Fugitives + Combustion scenario. Note that the additional reactivity introduced by fugitives was not enough to overcome the effects of the combustion NOx titration of ozone near the source. The maximum enhancements of methane and PAR above background due to landfill fugitives were 22.6 ppm and 98.7 ppb respectively. The former value is comparable to urban methane concentrations in the vicinity of leaking natural gas pipelines [7] and to some CRDS measurements of ambient methane outside Michigan landfills during EGLE inspections. 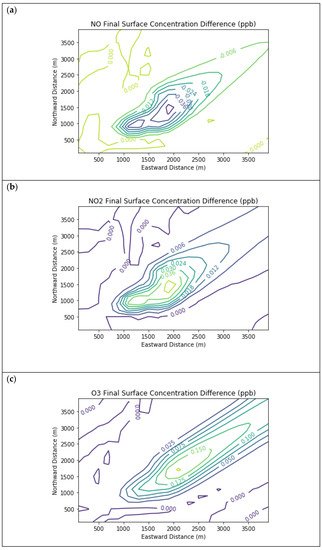 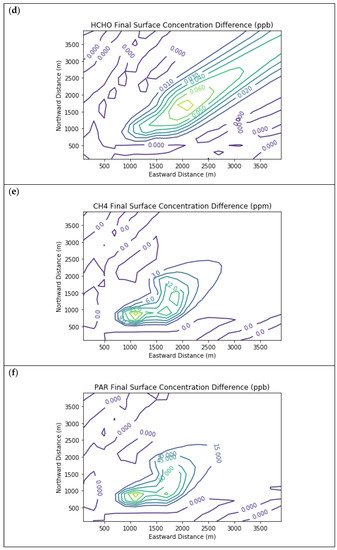 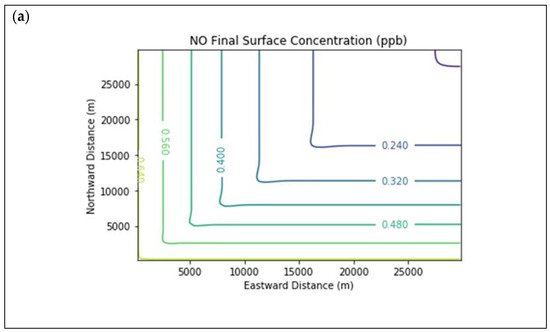 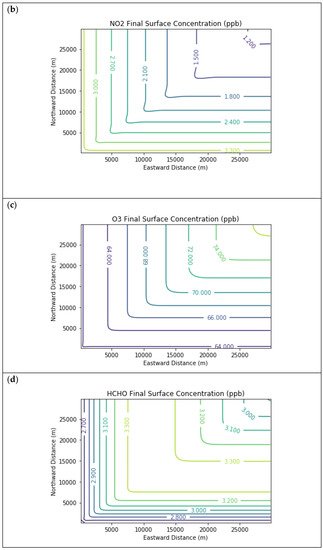 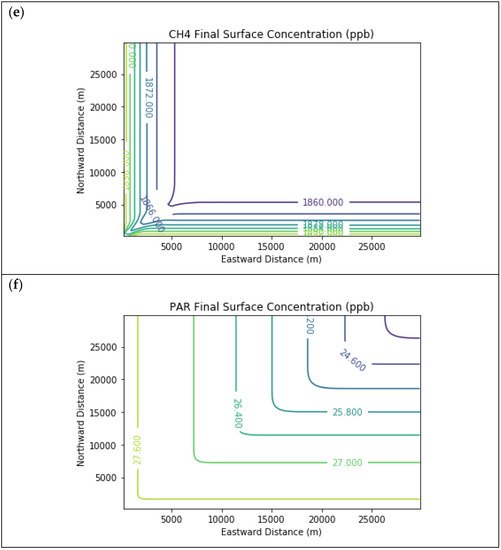 Figure 5. Near Source: Fugitives + Combustion − Combustion Only. Final surface concentrations of (a) NO, (b) NO2, (c) O3, (d) HCHO, (e) CH4, and (f) PAR at the end of the 3-h simulation in the Baseline scenario for the 30 km × 30 km domain
Figure 6 presents the additional ozone formed due to landfill combustion emissions in the Combustion Only scenario over and above that in the Baseline scenario. Maximum ozone enhancements were over 1 ppb over a broad segment of the downwind plume. 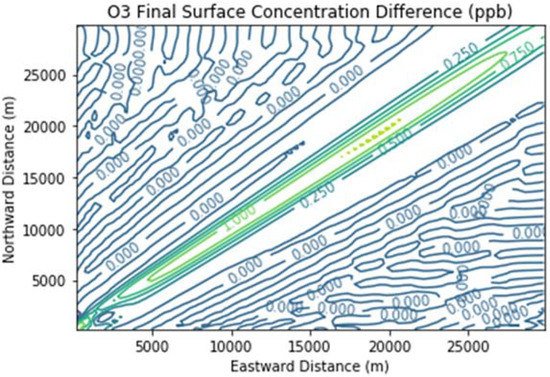 Figure 6. Ozone difference plot between the Combustion Only and Baseline scenarios at the end of the 3 h simulation for the 30 km × 30 km domain.
Figure 7 and Figure 8 show the ozone and methane increments resulting from the addition of landfill fugitive emissions of ozone precursors in the Fugitives + Combustion scenario. Note that the methane increment exceeded 100 ppb all the way to the downwind edge of the far-field domain. The ozone increment exceeded 0.1 ppb beginning at about 16 km downwind of the hypothetical landfill and maximized at the domain edge. 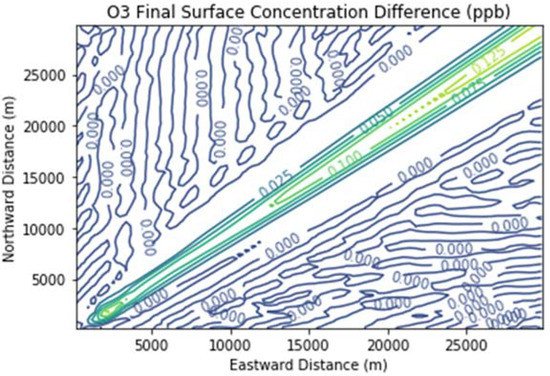 Figure 7. Ozone difference plot between the Fugitives + Combustion and Combustion Only scenarios at the end of the 3 h simulation for the 30 km × 30 km domain. 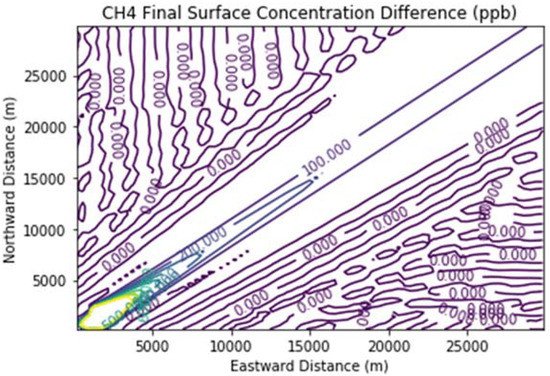 Figure 8. Methane difference plot between the Fugitives + Combustion and Combustion Only scenarios at the end of the 3 h simulation for the 30 km × 30 km domain.
The ozone increment of over 0.1 ppb due to landfill fugitive emissions is significant considering that it was due to a single source only. Additional ozone would result from landfill gas leaks if there were outside emissions of ozone precursors. Emissions from mobile sources, for example, would tend to counteract the NOx-limited conditions assumed in this study and attribute more importance to methane as a radical extender, as well as to formaldehyde as a radical precursor. It is therefore plausible that the ozone increment of a large leak of landfill gas in a real-life setting could be several tenths of a ppb, a significant fraction of the ozone design value reductions needed to bring Southeast Michigan into attainment of the U.S. federal ozone standard. This is in addition to the ozone increment of around 1 ppb due solely to landfill combustion activities.