Subjects: Others | Others
View times: 13
Submitted by:

Gravity constituted the only constant environmental parameter, during the evolutionary period of living matter on Earth. However, whether gravity has affected the evolution of species, and its impact is still ongoing.

During the life-forming procedure, all parameters can be held variable, yet one physical quantity was constant, and that was gravity, which is considered to have remained unchanged during the last four billion years [1]. On Earth, life was able to form and evolution led to the development of living matter. Despite all terra-forming events, gravity was the constant factor.

2. Effects of Altered Gravity on Homo sapiens and Other Vertebrate Species

2.1. Gravity and the Thyroid Gland

Albi et al. (2017) supported that microgravity induces morphological and functional alterations within the thyroid gland [2]. Its physiological function is required for physical and mental health, as cardiovascular, musculoskeletal, nervous and immune systems are controlled by it. In particular, the authors treated FRTL-5 cells with the thyroid stimulating hormone (THS) at the onset of microgravity and fixed them just at the end of the microgravity period [3]. They also observed cytoskeletal changes of human FTC-133 cells rapidly after entrance into microgravity. Follicular cells are responsible for the production and the secretion of the thyroid hormones thyroxine (T4) and triiodothyronine (T3) and constitute the mayor cell type in the thyroid gland.

2.2. Gravity and the Cardiovascular System

Post-flight orthostatic intolerance, cardiac atrophy and heart rhythm disturbances are some of the indications proving that microgravity affects the human cardiovascular system [4]. NASA demonstrated that mean arterial pressure is reduced in the case of long-term exposure to microgravity [5].

2.3. Gravity and the Immune System

Immune cells are also sensitive to altered gravity conditions. Bucheim et al. (2019) stated that a specific group of stressors on humans, which are able to provoke an aberrant immune activation, triggered a sustained release of endocannabinoids in a long duration spaceflight [6].

2.4. Gravity and the Vestibular System

Our guidance system—the vestibular—is able to control posture, stability of the body, the activity of the sympathetic nerve, arterial pressure, feeding behavior, muscle and bone metabolism, eye movements and vertical orientation with respect to gravity. This system contains otolith organs and semicircular canals that sense linear and angular acceleration, respectively. The vestibular system is highly plastic and appears to be affected upon exposure to altered gravitational circumstances [7].

2.5. Gravity and the Musculoskeletal System

Some of the most striking effects of microgravity include the musculoskeletal system. Up-to-date experience includes the study of muscle and skeleton in space stations, which concerned a time duration of almost a year. In previous studies it has been reported that during International Space Station (ISS) missions, astronauts experienced a reduction in bone mineral density (BMD) by 2.5–10.6% in the lumbar vertebrae, decrease of femur BMD by 3–10%, and some manifested 1.7–10.5% decrease in BMD of the femoral neck [8]. From the first space flights it has become apparent that astronauts experienced a 1–6% decrease in the spine, femoral neck, trochanter and pelvis per month, which is however varying between individuals [8].

Gravity seems to have an evolutionary role in snakes. This is evident by the difference in the position and structure of their internal organs, which is attributed to their evolution and adaptation in different gravitational environments. In particular, snakes that crawl up and down trees are constantly coping with gravity. On the other hand, sea snakes spend their life swimming and neutrally float, whilst land snakes move in a horizontal level. The orientation of each snake species to the direction of the gravitational force is different, according to its environment. Lillywhite H.B. (1988) first noticed that a tree snake’s heart was closest to the brain and supported that blood should not be transferred distantly from the heart to the brain [9]. Thus, he suggested that sea snakes are mainly influenced by gravity, considering that they faint with increased gravity, whilst tree snakes are gravity-tolerant.

The exact mechanism of gravity sensing is still unknown. It is possible that even in the primeval conditions of life on Earth, the first microorganisms were formed under the influence of gravity (Figure 1). One of the early works on the subject presented a possible explanation for the forces that shaped life [10]. In particular, this hypothesis postulated that the effects of life forming events took place in a specific order that forces acted on the first cells in a specific order. In a simplified form the life-forming forces appear in a hierarchy, which can be described as Equation (3) [10]: 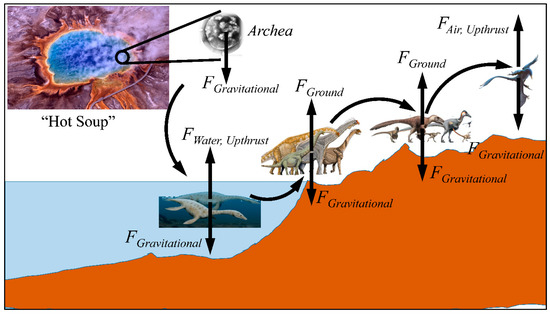 Figure 1. A diagrammatic representation of the evolution on Earth and the force of gravity acting on all stages of evolving life. As organisms evolved from the primary microorganisms to the formation of life in water, the transition to land and then air was constantly under the effect of gravitational forces (Legend: the images of the “hot soup”, archaea and dinosaurs were obtained from https://en.wikipedia.org/wiki/Dinosaur, under the CC BY 2.0 license, Accessed on 3 October 2020).

In another report, another aspect is considered, the role of water. Under the influence of gravity, water behaves as a liquid with specific viscosity. In space, i.e., under microgravity, water properties change and thus its diffusion properties [11]. This is fundamental since diffusion was considered one of the principal physical phenomena in evolution [12]. The role of water becomes more apparent in the case of plants, which are able to withstand gravitational forces without a support mechanism. Plant growth and water transport (for example in trees that exceed 10 m) takes place through capillary phenomena, defying gravity. The same mechanism takes place in space, as plants were able to grow and reproduce in space [13][14].

The complexity of organisms is directly related to the complexity of the sustaining environment. Previous studies have shown that there are significant differences between species living in conditions on the Earth’s surface and species under microgravity. Especially in humans, those changes include various physiological systems, as for example, immunity, locomotion and metabolism. Yet, one of the main characteristics we would highlight is the role of musculature and skeletal physiology. The fact that humans lose a significant amount of bone mass in space probably restricts the choices of space exploration for future colonialization. That means the planets of choice should probably be those with conditions similar to those on the Earth, especially with respect to the gravitational force. In this sense, Venus is the closest planet that resembles the Earth with respect to gravity.

Gravity seems to have affected the ongoing evolution of species. A more in-depth investigation to his would require frequent and long-term experimentations in space conditions or environments of altered gravity. Each organism should be studied throughout numerous generations in order to determine the profound biological changes in their evolution. Ultimately, considering the aforementioned studies, it appears that gravity does not only curve the space–time continuum, but the biological continuum, as well.