The adverse relationship between viral hepatitis and pregnancy in developing countries had been interpreted as a reflection of retrospectively biased hospital-based data collection by the West. However, the discovery of hepatitis E virus (HEV) as the etiological agent of an epidemic of non-A, non-B hepatitis in Kashmir, and the documenting of the increased incidence and severity of hepatitis E in pregnancy via a house-to-house survey, unmasked this unholy alliance. The pathogenesis of the association is complex and several mechanisms are under intense studies. Management is multidisciplinary and needs a close watch for the development and management of acute liver failure. The development of vaccine is seen as a breakthrough in the control of hepatitis E.

Space-time clustering of events in which people fall acutely ill with jaundice, quickly slip into a coma and die, is an alarming situation, more so when the victims are mostly or exclusively pregnant women [1].
The association between epidemics of jaundice and pregnancy has long been reported in scientific literature. The earliest recorded epidemic of jaundice with high mortality in pregnant women was reported from the French Caribbean colony Martinique in the year 1858 [2]. A strange disease had struck the island which left 24 women dead, and 20 of these were pregnant. All the deceased pregnant women had delivered stillborn babies. None of the jaundiced soldiers, all males, in the nearby garrison had died. Another notable epidemic of jaundice occurred in Paris in 1871. Deaths occurred exclusively in gestating women and autopsies revealed acute yellow atrophy of the liver as the cause of death [3]. Over the ensuing decades until 1946, many countries in Europe recorded several epidemics of jaundice with high death rates in pregnant women [1]. These epidemics also reported high rates of fetal and neonatal deaths as a result of abortions, premature deliveries, miscarriages, and stillbirths in both dead and surviving pregnant women. All these outbreaks were likely to have been related to hepatitis E; however, no serological tests of sera from such outbreaks are available. With improvement in economic conditions and clean water supplies, epidemic disease with high mortality in pregnant women is no longer reported from industrialized countries [4].

HEV-ALF in pregnant women starts with prodrome followed by other features of acute viral hepatitis [11]. However, a rapidly evolving devastating illness develops within a short pre-encephalopathy period (5.8 ± 5.3 days), characterized by encephalopathy, cerebral edema with features of cerebellar coning, coagulopathy, and upper GI bleed [81][82][83]. In addition, the occurrence of “Disseminated intravascular coagulation (DIC)” is a distinctive feature of HEV-ALF during pregnancy [84], resembling a Schwartzmann phenomenon.

The authors compared the mortality rates in 249 pregnant women, 341 non-pregnant women, and 425 men, 15 to 45 years of age. A prospective study on 180 pregnant women with ALF revealed 79 with HEV-ALF and 101 with non-HEV-ALF [81]. Factors predictive of poor prognosis included non-HEV etiology, prothrombin time > 30 s, grade of coma > 2, and age > 40 years and did not include pregnancy per se or duration of pregnancy. The fact that pregnant women acquired ALF more often did not mean that such patients will have higher mortality [85].

HEV infection in pregnant women requires a team approach, determined by stage and severity of the disease in the mother, occurrence of obstetrical complications, and severity of vertically transmitted disease in the fetus/neonate.
HEV-AVH is usually a self-limiting disease and needs supportive medical treatment. At the onset, prodromal symptoms are limited to anorexia, fever, nausea, vomiting, and abdominal discomfort and generally subside within a week. A few patients may need a short hospital stay for intravenous fluids given for severe vomiting. Otherwise, patients are advised bed rest at home with bathroom privileges during prodrome and icteric disease. Later, physical activity is restricted and work can be resumed when disease recovery occurs. A portable high caloric diet with high carbohydrate and low fat is usually advised, but has no benefit in disease recovery. Cholestatic symptoms if intractable can be managed with antihistamines, cholestyramine, and/or ursodeoxycholic acid (UDCA). Corticosteroids should not be administered unless there is associated autoimmune hepatitis.
Patients are at high risk for ALF and the disease course can be unpredictable. So, a close watch on impending signs of liver failure (shrinking liver size, high or rising INR, rapid rise in serum bilirubin, and development of ascites or coagulopathy) must be kept. Patients with impending signs of ALF need intensive care management. Management policies to treat complications of ALF, namely encephalopathy, cerebral edema, hypoglycemia, coagulopathy, and possible DIC, GI bleed, sepsis, and renal failure, have been well standardized and should be immediately enforced. Liver transplantation team if available must be involved and considered if prognostic criteria employed are met [81][82][86][87]. Unfortunately, as of today, only isolated case reports of liver transplantation in pregnant women with HEV-ALF are published in the literature [88][89][90]
A close obstetric watch is needed in both HEV-AVH and HEV-ALF patients to evaluate the stage of pregnancy, fetal wellbeing, and growth. Complications such as abortions, preterm labor, premature rupture of membranes, stillbirth, intrauterine deaths, and increased risk of bleeding associated with coagulopathy can occur and need to be aggressively managed by standard obstetric guidelines [91]. Therapeutic termination of pregnancy and its beneficial effects on liver disease in the mother needs serious consideration [92][93], as events in the maternal–fetal interface and the fetus are involved and are incriminated in the severity of the maternal disease [94][95]. Therapeutic termination has proved effective in two other clinical syndromes, namely HELP syndrome and acute fatty liver in pregnancy, wherein fetal events drive the maternal disease [96][97]. Several investigators do not recommend termination of pregnancy in pregnant women with HEV-ALF [98][99]. This is based on the results of a retrospective study, in which 42 patients with HEV-ALF were studied [100]. Nine of the 22 women who delivered had died along with 14 of the women who continued their pregnancy. There was no significant difference in mortality in the two groups. However, in a subgroup analysis, the authors showed that patients with lesser degree (grade 1–3) of encephalopathy who delivered had lesser mortality (5/16) than those who continued their pregnancy (13/20, p < 0.046). Satia and Shilotri [101] from Mumbai, Maharashtra, India showed promising results of induction of labor in a pregnant woman with HEV-ALF with grade 2 hepatic encephalopathy and DIC. After induced vaginal delivery, the patient made an eventual recovery. The authors recommended therapeutic termination of pregnancy in HEV-ALF with lower grades of encephalopathy for a better maternal outcome. We showed that of the 16 pregnant women with HEV-ALF, 10 of whom also had DIC, all the six mothers (DIC in 3) who delivered babies within 4 days (mean ± 1SD 2.3 ± 1.0 days) from onset of encephalopathy and with lower grades of encephalopathy (mean ± 1SD 3.0 ± 0.89) survived. In contrast, all the 10 mothers, of whom six had DIC, who died had delivered babies after 4 days (mean ± 1SD 9.6 ± 3.0 days) and with higher grades of encephalopathy (mean ± 1SD 3.5 ± 0.53) (p = 0.02). The results of such an endeavor are striking in sick patients with severe metabolic problems and DIC (Figure 1). Thus, therapeutic or spontaneous termination of pregnancy with HEV-ALF early in the course of disease with lesser grades of encephalopathy was recommended [84]. Randomized trials on the therapeutic role of termination in HEV-ALF pregnant women need to be carried out. However, till the results of such trials are available, it is a safe practice to induce labor early in the course of disease with lower grades of encephalopathy for a better maternal outcome. 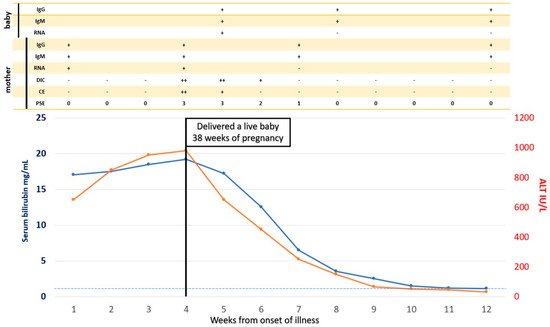 Figure 1. Spontaneous Vaginal Delivery in pregnancy with HEV-ALF and the outcome on maternal disease. A 30-year-old pregnant woman presented with features of icteric hepatitis E virus infection. On the 24th day of her illness, she had rapid deterioration with encephalopathy, cerebral edema, and laboratory features of DIC. She delivered a live baby vaginally with icteric hepatitis E four days after the onset of encephalopathy. Serial follow-up showed rapid clinical improvement in encephalopathy, cerebral edema, and DIC. PSE = portosystemic encephalopathy, CE = cerebral edema, DIC = disseminated intravascular coagulation, RNA = HEV RNA, IgM = IgM anti-HEV, IgG = IgG anti-HEV.
Neonatal care is essential as HEV is known to infect the fetus/neonate resulting in considerable fetal and perinatal morbidity and mortality [102].
Several drugs, namely ribavirin, pegylated IFN, and sofosbuvir, inhibit HEV replication, have an antiviral property, and are drugs of choice to manage chronic HEV-3 in solid organ transplant and patients with some hemopoietic malignancies [103]. Recently ribavirin has been successfully used to treat HEV acute-on-chronic-liver-failure and severe HEV infection in nonpregnant states [104]. Ribavirin is teratogenic and is contraindicated during pregnancy and there are no reports of ribavirin therapy in HEV-AVH and HEV-ALF.

The development of the HEV vaccine is seen as a breakthrough in the control of hepatitis E [105][106]. Vaccination against HEV in pregnant women and women of childbearing age in endemic regions may be the most important management strategy [107]. The Chinese vaccine, HEV 239 marketed as Hecolin [108], is protective against HEV-gt1. The vaccine has been shown to be safe in pregnant women [109] and protects against HEV infection and HEV-related adverse outcomes in pregnant rabbits [110]. Recently, a phase IV trial has been initiated to assess the effectiveness, safety, and immunogenicity of the HEV 239 vaccine in women of childbearing age in rural Bangladesh, where HEV infection is endemic [111]. Availability of the vaccine in developing countries is being watched with great interest [112].