Chitosan-Based Nanomaterials and its Applications

The small intestine provides the major site for the absorption of numerous orally administered drugs. However, before reaching to the systemic circulation to exert beneficial pharmacological activities, the oral drug delivery is hindered by poor absorption/metabolic instability of the drugs in gastrointestinal (GI) tract and the presence of the mucus layer overlying intestinal epithelium. Therefore, a polymeric drug delivery system has emerged as a robust approach to enhance oral drug bioavailability and intestinal drug absorption. Chitosan, a cationic polymer derived from chitin, and its derivatives have received remarkable attention to serve as a promising drug carrier, chiefly owing to their versatile, biocompatible, biodegradable, and non-toxic properties. Several types of chitosan-based drug delivery systems have been developed, including chemical modification, conjugates, capsules, and hybrids. They have been shown to be effective in improving intestinal assimilation of several types of drugs, e.g., antidiabetic, anticancer, antimicrobial, and anti-inflammatory drugs. In this review, the physiological challenges affecting intestinal drug absorption and the effects of chitosan on those parameters impacting on oral bioavailability are summarized. More appreciably, types of chitosan-based nanomaterials enhancing intestinal drug absorption and their mechanisms, as well as potential applications in diabetes, cancers, infections, and inflammation, are highlighted. The future perspective of chitosan applications is also discussed.

Oral entry route is the most favorable and frequently used pathway for drug administration owing to its simplicity, feasibility, convenience, low-cost manufacturing process, non-invasiveness, and safety for most patients [1][2]. After intake of medication, the orally administered drugs travel down to the stomach and they are majorly absorbed at the proximal part of small intestine before entering the systemic circulation. However, the drug substances have to challenge with the harsh environment of the gastrointestinal (GI) tract, including gastric pH, digestive enzymes, bile salts, GI motility, and intestinal mucosal layers, ameliorating the drug absorption or drug assimilation and leading to poor oral bioavailability [3][4]. In order to overcome these physiological obstacles, the drug delivery system has been designed and developed. The ideal characteristics of nano-drug carriers are safe, biocompatible, biodegradable, acid-tolerant, and GI enzyme-stable [5][6][7]. Moreover, to deliver the drugs to the systemic circulation, the carriers should help to penetrate the mucosal microenvironment and prolong the drug-mucosa contact time for extent duration of drug absorption [8][9]. In response to the fluctuation of pH along the GI tract, the suitable carriers should be able to control the drug release in each GI segment. In recent times, the investigators have taken the advantages of these properties found in the natural polymers, particularly chitosan [2][4].
Chitosan is a cationic linear heteropolysaccharide, consisting of β-(1,4)-linked D-glucosamine (GlcN, deacetylated monomer) and N-acetyl-D-glucosamine (GlcNAc, acetylated monomer) [10][11]. It is obtained from chitin, containing β-(1,4)-linked 2-acetamido-2-deoxy-β-D-glucose, which is the second-most abundant natural polymer in the world and is mostly found in the structural component of exoskeletons of crustaceans (e.g., shrimps, lobsters, and crabs), insects, and arthropods as well as in the cell wall of fungi [10][11]. The outstanding features of chitosan, including natural abundance, water solubility, non-toxicity, biodegradability, and chemical modifiability, make this natural biomaterial attractive as an ideal candidate for adopting in pharmacological and biotechnological applications [8]. In the drug delivery system, the chitosan-based nanoparticles have been formulated by several techniques, such as chemical modification, ionic gelation, and polyelectrolyte complexation methods [12][13]. These nanomaterials can boost up the oral drug absorption by improving mucoadhesion, the permeation-enhancing effect, and controlled drug release [2][4][8][9].

Since one of our goals of this review is to summarize the types of fabricated chitosan-based nanomaterials in the aspect of the drug absorption enhancer, the literature search was performed on the full-text articles published in English, with date limits of 2010 up to 8 February 2021, assessed in the PubMed database by using the search term of “chitosan” AND “intestine” AND “drug delivery”. As a result, a total of 106 articles were collected by EndNote and further selected for relevant topics. Additional articles that provided specific evidence and information (e.g., diabetes, cancers, infections, inflammation, polyelectrolyte complex, thiolated chitosan, trimethyl chitosan, carboxymethyl chitosan, alginate, Eudragit etc.) were included.
Chitosan-based nanomaterials have received tremendous attention from many investigators over the past decade as the enhancer of drug delivery, particularly drug absorption, based on their marvelous properties, which are (i) protection against GI luminal degradation (ii) mucoadhesion, (iii) permeation enhancement, (iv) controlled drug release, and (v) efflux inhibition (Figure 2). The significance of chitosan-based nanomaterials is indicated and discussed in detail as below. In addition, the types of chitosan-based nanomaterials are summarized in Table 1. 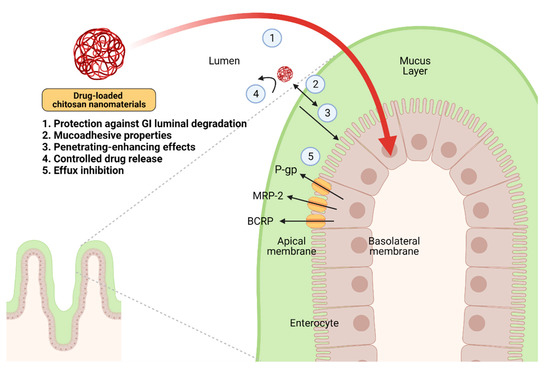