Limb lengthening for achondroplasia is controversial. Modern techniques of limb lengthening, using distraction osteogenesis, have been able to add significant length to the lower and upper limbs of children and adults with achondroplasia and hypochondroplasia. The long-term results of these treatments have remained unknown.

From 1987 to 1997, all the cases of ELL performed by the author were by two-segment lengthenings; bilateral tibial lengthening [4] (double-level lengthening with external fixation in most cases) followed by single-level bilateral femoral lengthening (Figure 1). 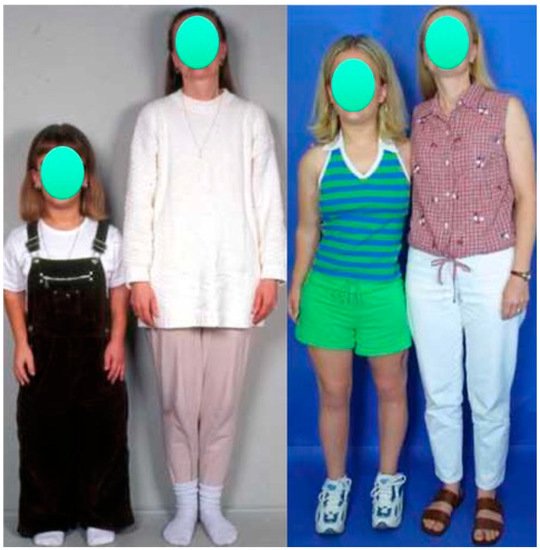 Figure 1. Photographs of a female patient with achondroplasia standing beside her mother at age 13 (left) and at age 17 (right). Her height increased from 4′ (122 cm) before lengthening to 5′1.5″ (156 cm) after two lower-limb 2-segment lower-limb adolescent-onset lengthenings totaling 10.25″ (26 cm). She also had 10 cm of lengthening of her humeri. 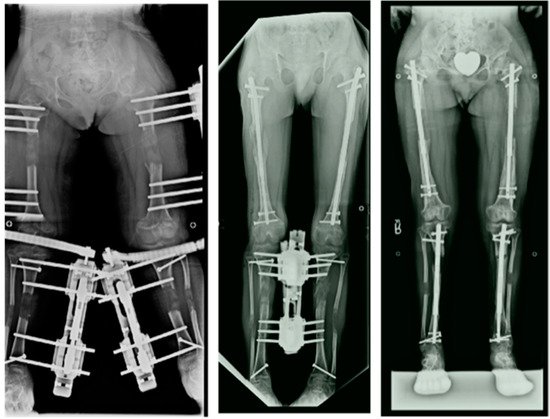 4-segment limits the total lengthening per bone segment to no more than 8 cm, and 2-segment lengthening lengthens segments up to 15 cm in the tibia through double-level bone cuts and 10 cm through a single bone cut. This reduces pain, risk of nerve injury, and muscle contractures [7]. In the juvenile age group, there is also the consideration of growth inhibition following lengthening. It is felt that this will reduce the risk of growth inhibition at a young age.

The average age at final follow-up was 26 years old (range 17–43 years). This represented a follow-up average of 13 years in the adult-onset group, vs. 10 years in the combined adolescent- and juvenile-onset groups (range 2–33 years) (Table 2).

While there were various complications during lengthening [4][8], for the purpose of this end-result study, we only tabulated the ones that led to permanent sequelae. One female patient, aged 16, developed paraparesis upon waking up from anesthesia at the time of removal of the external fixators after a successful second 2-segment lower-limb lengthening (total length gain was 25 cm). The paraparesis was treated by decompression and fusion and did improve, although she was left with some permanent lower-limb weakness. A second patient developed RSD after humeral lengthening.

Two of these were treated by periacetabular osteotomy immediately after completing lengthenings. A third patient went on to develop arthritis of one hip which will likely require a total hip replacement. No other patients developed degenerative joints of hips, knees, or ankles. Five patients developed spinal stenosis requiring surgery, either prior to, during treatment, or at a later date remote from the lengthening.

All patients had completed high school, and many went on to higher education. All patients had returned to normal activities of daily living. Many were also participating in sporting activities. The parents of the one patient who committed suicide were emphatic that his depression was not related to his previous lengthening surgery, which they felt was a very positive event in his life.

Most focused on the short-term results and specific lengthening complications. 2015 from Korea [9] reported on 28 achondroplastic patients who underwent lengthening as adolescents (bilateral tibias followed by bilateral femurs). from the UK [10] reported on 10 achondroplastic children who lengthened a total average of 20 cm with good final results. Lee and Chow from Hong Kong [11] published on 8 patients with an average gain of 5.2 cm in the femurs and 5.8 cm gain in the tibias.

Using Schiedel and Rodl’s [14] metanalysis as the range of height gain from lengthening from most studies (5.7–20.5 cm) suggests that few if any, achondroplastic patients achieve low normal height for their sex with the methods used by most authors (2-segment: bilateral femoral and bilateral tibial lengthening) [9][15][10][16][17][11]. It is clear that both the adolescent-onset as well as the juvenile-onset strategies gained sufficient height to reach the low normal height for their sex. ELL can add sufficient height to restore achondroplastic patients to normal adult heights for each sex in the majority of cases. and Peretti et al. recognized that the goal of lengthening should be to aim for a low normal height for the sex of the patient [18][19].

Although we did not do quality of life (QOL) or psychologic analysis, prior studies of QOL have shown that despite frequent complications and despite the limited height gain as previously described, the QOL improved with ELL [20]. Batibay et al. showed that despite complications with lower limb lengthening the QOL scores improved significantly if humeral lengthening was also performed [21]. Fernandes et al. showed that limb-lengthening surgery helped patients in Spain integrate into society better than in the USA, where such surgery was less common [22]. Their patients were motivated by a combination of being able to overcome some physical shortcomings related to their short stature and short limbs and, at the same time, improving their social life.

This study confirms that ELL planning should consider the total height gains desired based on prediction of adult height using the achondroplasia growth charts [12][13][18]. To achieve the desired gain in height, the adolescent-onset strategy should be chosen if the goal is under 30 cm. The juvenile-onset strategy also has the advantage of not allowing the achondroplastic or hypochondroplastic child to fall too far behind their peers in height. Lengthening younger than age 7 in girls and 8 in boys risks growth inhibition and also is limited in total amount of length gain [23].

Drug therapy for achondroplasia is in clinical trials. The height gain from these new drugs will likely depend on the age the drugs are started.  (e.g., girls achieve half their lower- and upper-limb growth by age 3 yrs. ; by age 1, both boys and girls have one-third of their total adult limb lengths). For this reason, it is likely that stature lengthening for children with achondroplasia will still be needed, but to a lesser extent, and only at skeletal maturity. This may involve one 2- or 4-segment lengthening with fully implantable lengthening devices.