Skeletal muscle has an outstanding capacity for regeneration in response to injuries, but there are disorders in which this process is seriously impaired, such as sarcopenia. Pharmacological treatments to restore muscle trophism are not available, therefore, the identification of suitable therapeutic targets that could be useful for the treatment of skeletal reduced myogenesis is highly desirable.

Skeletal muscle tissue has an inherent capacity for regeneration in response to minor injuries. However, there are circumstances that can cause irreversible loss of muscle mass and function, for example, severe trauma, tumor ablation, and different types of congenital or acquired muscle diseases, such as muscular dystrophies and sarcopenia [1][2][3][4][5][6].
Pathological situations, in which skeletal muscle regeneration is seriously impaired, represent conditions that affect motor unit function with significant disabilities and reduced quality of life (QoL) in people who are affected. Pharmacological treatments are not available for these muscle disorders. Hence, there is an unmet need for pharmacological strategies for the treatment of skeletal muscle degenerative disorders.
Postnatal skeletal muscle stem cells, called satellite cells (SCs), are responsible for skeletal muscle regeneration during the lifespan. Several studies report that some myopathies, such as sarcopenia and muscular dystrophies, are related to a failure of SCs to enter into the myogenic program [7][8]. As SCs are committed myogenic precursors, and possess the capability of self-renewal, a unique feature of stem cells, they play a central role in the search for therapies for skeletal muscle disorders [9]. The identification of new therapies, and the testing of candidate drugs for their ability to improve muscle regeneration, require appropriate in vitro cell-based screening assays to select compounds or new targets for further development. The use of human skeletal muscle-derived cells is an essential and extremely powerful cell-based model system that may support and predict from in vivo results the in vitro effects obtained in the laboratory, which could later be useful for finding therapeutic drugs targeted for skeletal muscle degenerative myopathies [10].
In the last decade, it has become possible to isolate and culture a population of SCs [11][12][13][14]. While the use of primary cultures of SCs also has some inherent drawbacks, mainly relating to the fact that they are generally slow growing and can undergo a limited number of divisions [15], SCs represent an important in vitro model to understand skeletal muscle physiology and pathology.
Calcium ion (Ca2+) is a ubiquitous intracellular signal that regulates a myriad of cellular processes, as it is one of the most specific and selective messengers in nature. It is involved in multiple signaling cascades critical for cell survival, growth, differentiation, and death [16][17]. It is essential for muscle function, and the tight coupling of muscle excitation and contraction by Ca2+ dynamics has been well established. Voltage-gated Ca2+ channels are key transducers which are activated by membrane depolarization and mediate Ca2+ influx in response to an action potential. Ca2+ entering the cell through voltage-gated Ca2+ channels serves as the second messenger of electrical signaling that initiates many different cellular events [18]. Moreover, many studies have shown the importance of Ca2+ for skeletal muscle development, maintenance, and regeneration [19][20][21].
The calcium-sensing receptor (CaSR) is a key systemic regulator of calcium homeostasis [22], acting as a modulator of extracellular Ca2+ concentrations, and it has been proven to be an important molecule in physiology and pathology [16]. It belongs to the class C G protein-coupled receptors (GPCRs), also known as 7-transmembrane domain receptors, a large protein family of receptors that sense molecules outside the cell and activate internal signal transduction pathways and, ultimately, cellular responses [23]. The CaSR is primarily expressed within parathyroid glands where it regulates parathyroid hormone (PTH) secretion, which in turn controls calcium homeostasis, by acting upon kidney, bone, and intestine to maintain Ca2+ concentrations within the physiological range (1.1–1.3 mM) [22]. Initially, studies of the CaSR were focused on calciotropic tissues, such as parathyroid, kidney, and bone, which have obvious roles in maintaining calcium homeostasis. Now, it has become clear that the CaSR is expressed in many other cells and organs (such as neurons, lungs, skin, placenta, breast, and blood vessels), without any evident role in maintaining calcium homeostasis [17]. Several studies have observed that abnormal CaSR expression and function are implicated not only in calciotropic disorders, such as hyper- and hypoparathyroidism, but also in diseases linked to non-calciotropic systems, such as of the nervous, reproductive, and respiratory systems, and even in diseases, such as chronic inflammation and cancer [16][17][22].
Drugs targeting CaSR in related pathologies are already available [24]. Moreover, several recent scientific studies have observed a role of CaSR specifically in the physiological differentiation of cells, such as keratinocytes, cardiomyocytes, and neurons, and in smooth muscle contractility and proliferation [25][26][27][28][29].
Despite the importance of this receptor, the expression and function of the CaSR in skeletal muscle has not been explored. Therefore, the aim of our study was to investigate the presence of CaSR in human skeletal muscle and its possible role in skeletal muscle myogenic differentiation, in order to find new possible therapeutic targets for skeletal muscle degenerative diseases.

2. Expression and Function of Calcium-Sensing Receptor in Human Skeletal Muscle 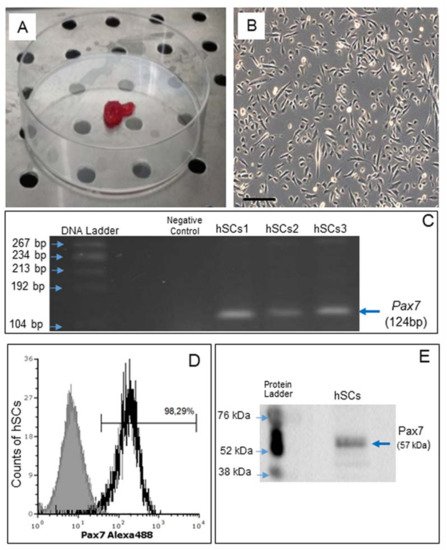 2.2. In Vitro Myogenic Differentiation of hSCs

Confluent hSCs, at 70–80% density in the plate, were differentiated toward the myogenic phenotype using an appropriate myogenic differentiation medium for 9 days. During this period, the activated cells align (myoblasts), then subsequently fuse with each other and, finally, differentiate into multinucleated myofibers. Phase contrast microscopy revealed the presence of multinucleated elongated cells, containing from three to more than eight nuclei, related to myotubes (Figure 2A). 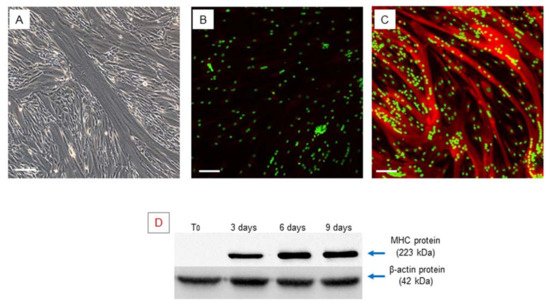 2.3. Analysis of CaSR Gene Expression in Human Skeletal Muscle Tissues (hSMts) and in the Derived Human Satellite Cell (hSC) Lines and during In Vitro Myogenesis

We performed qualitative RT-PCR using different pairs of primers that target exons 2/3, 4/5, and 6/7 of the human CaSR gene (Table 2). CaSR mRNA expression was neither detected in human skeletal muscle tissues (hSMt1, hSMt2, hSMt3), nor in the respective established human satellite cell lines (hSCs1, hSCs2, hSCs3), using any of the primer settings (Figure 3A–C). A primary cell culture of human adenoma parathyroid cells (PTcs) was used as a positive control. On the other hand, human embryonic HEK293, used as a negative control, did not show CaSR expression, as expected [32]. Housekeeping gene β-actin was used to verify the appropriate quality of the assayed samples (Figure 3D). 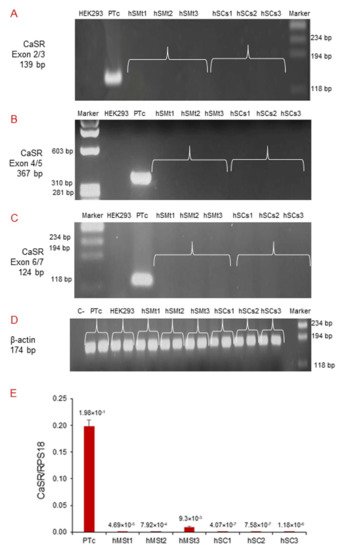 Figure 3. Molecular analysis of CaSR gene expression in hSMts and established hSC lines. The analysis in RT-PCR showed the expression of CaSR gene using different pairs of primers that fall into: (A) exons 2/3; (B) exons 4/5; (C) exons 6/7. The gene was not detected in any of the samples. The analysis shows the presence of CaSR only in human PTcs that were used as a positive control. HEK293 were used as a negative control. Housekeeping β-actin gene analysis of the assayed samples (D). Real-time qPCR analysis of CaSR gene in hSMts and in hSC lines. The analysis showed a very low expression of CaSR gene in hSMts and in hSC lines. PTcs were used as positive control (E).
Table 2. List of the human gene-specific primers used in the analysis.
Tm: melting temperature; bp: base pairs of amplicon.
Real-time qPCR detected very low CaSR expression levels in hSMts and in the established hSC lines, but since the quantity was extremely small in all of the assayed samples, it was not possible to sequence the amplicons to confirm the detected mRNA products (Figure 3E).
Subsequently, since during in vitro myogenesis satellite cells mature and gradually express receptors [14], we analyzed CaSR gene expression by RT-PCR at T0 and after 9 days of myogenic differentiation, using all three different pairs of primers previously utilized. The analyses showed no CaSR gene expression at these experimental time points, demonstrating the absence of CaSR gene during the in vitro myogenesis of the three primary hSC lines. CaSR gene expression was demonstrated in PTcs, while it was absent from HEK293 cells. Housekeeping gene β-actin was used in order to verify the appropriate quality of the assayed samples (Figure 4A–D). Additionally, real-time qPCR was also performed to evaluate the possible expression of CaSR during myogenesis. We evaluated CaSR gene expression at T0, 3, 6, and 9 days of myogenic differentiation of the three primary hSC lines. Data verify the absence of CaSR during myogenic induction, confirming the data reported in Figure 3, and assuming that this gene is not present during the differentiation process of the hSCs (Figure 4E,F). 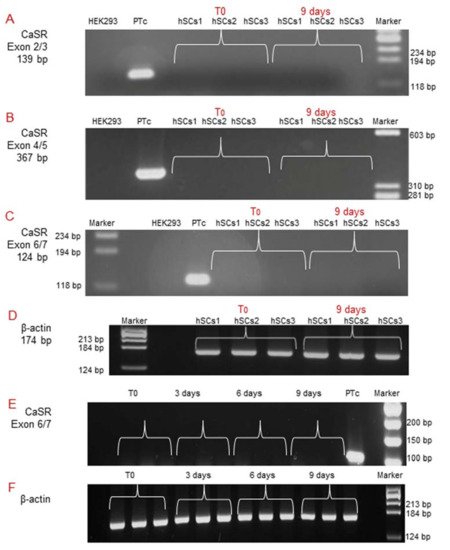 Figure 4. Molecular analysis of CaSR gene expression during in vitro myogenesis of the hSC lines. The analysis showed the absence of the CaSR gene at T0 and at 9 days of myogenic differentiation of 3 primary hSC lines using different pairs of primers that fall into: (A) exons 2/3; (B) exons 4/5; (C) exons 6/7. The primary cultured human PTcs were used as a positive control and HEK293 cells were used as a negative control. Housekeeping β-actin gene analysis of the assayed samples (D). Real-time qPCR analysis of CaSR gene at different time points T0, 3, 6, 9 days of myogenesis of the established hSC lines. The analysis showed no detection of expression of CaSR gene in hSC lines. Human primary cultured parathyroid cells (PTcs) were used as positive control (E). Negative control: PCR without template cDNA in β-actin gene analysis (F). Experiments were carried out in triplicate and are representative of the three established hSC lines.

After analyzing the CaSR gene expression, our study was focused on the evaluation of a possible expression of CaSR protein in hSMt sections, in the established hSC lines, and during myogenic differentiation. We performed: (a) Western blot analysis, (b) immunofluorescence staining, and (c) flow cytometry, in order to assess the presence of the protein CaSR.
CaSR protein expression in primary hSC lines was investigated by Western blot analysis, by which it is possible to evaluate the size of the CaSR protein either in monomers of 140 and 160 kDa (in reducing condition with β-mercaptoethanol or 50 mM DTT, dithiothreitol, disulfide bond breaker) or in dimers of 240 kDa (non-reducing condition) forms.
The analysis, in standard reducing conditions, was performed in primary hSC lines at different time points: T0, 3, 6, and 9 days of myogenic differentiation. The specificity of the antibody was demonstrated using HEK293 cells, stably transfected with human CaSR (HEKCaSR), and used as a positive control. The obtained results showed very faint bands of about 140 kDa and 160 kDa (size of CaSR monomers) in the basal hSC lines and during myogenic differentiation (Figure 5A). 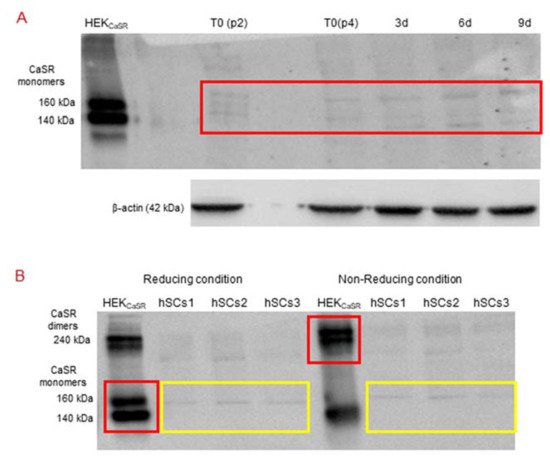 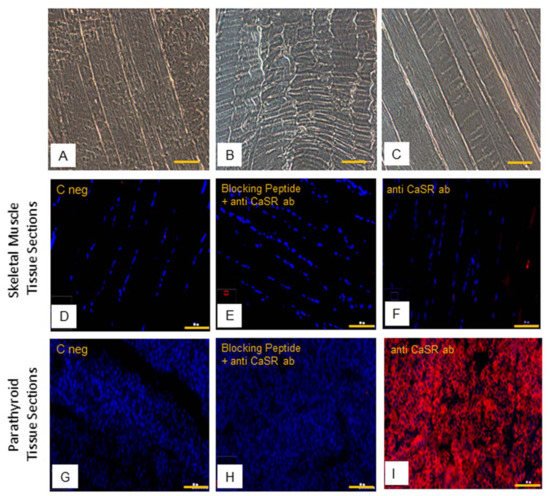 Figure 6. Human skeletal muscle tissue (hSMt) sections; observations in phase contrast microscopy, original. Magnification: 10×, scale bar 200 µm (A–C). Immunostaining of CaSR protein. Analysis of CaSR protein in human skeletal muscle tissue sections: (D) negative control only with secondary antibody, (E) control with anti-CaSR antibody absorbed with blocking peptide, and (F) with primary anti-CaSR antibody. Analysis of CaSR protein in human parathyroid tissue sections used as positive control: (G) negative control with only secondary antibody, (H) control with anti-CaSR antibody absorbed with blocking peptide, and (I) with primary anti-CaSR antibody. Fluorescent microscopy in conventional colors: red for CaSR and blue for nuclei, original magnification: 10×, scale bar: 200 µm. Experiment was carried out in triplicate (in hSMt sections of three different humans).
The results of immunofluorescence analysis revealed no staining of CaSR in hSMt sections (Figure 6D,F). In comparison to that, positive detection of CaSR expression in human parathyroid tissue sections validated our method of analysis (Figure 6G,I). The specificity of the anti-CaSR antibody was verified by one extra internal negative control in the assay, where the antibody binding was blocked by pre-absorption with the blocking peptide [33][34]. The results demonstrate the absence of CaSR protein expression in hSMts (Figure 6E,H).
The subsequent immunostaining performed in hSC lines also showed no detection of CaSR protein in satellite cells (Figure 7A,B). Human PTcs were used as a positive control, to validate the method and anti-CaSR antibody (Figure 7C,D). 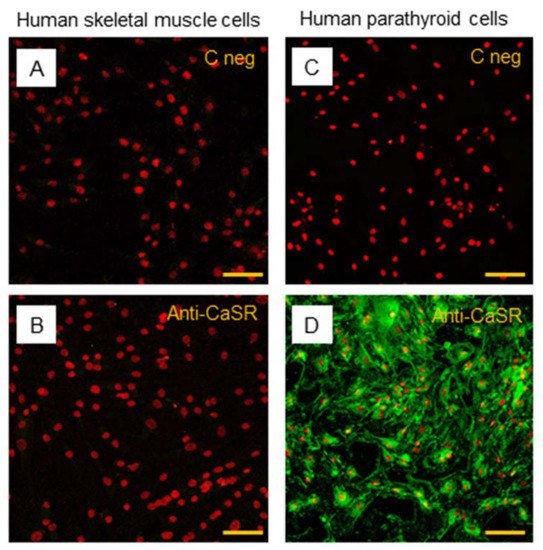