Messenger RNA (mRNA) is being extensively used in gene therapy and vaccination due to its safety over DNA, in the following ways: its lack of integration risk, cytoplasmic expression, and transient expression compatible with fine regulations. However, clinical applications of mRNA are limited by its fast degradation by nucleases, and the activation of detrimental immune responses. Advances in mRNA applications, with the recent approval of COVID-19 vaccines, were fueled by optimization of the mRNA sequence and the development of mRNA delivery systems. Although delivery systems and mRNA sequence optimization have been abundantly reviewed, understanding of the intracellular processing of mRNA is mandatory to improve its applications. 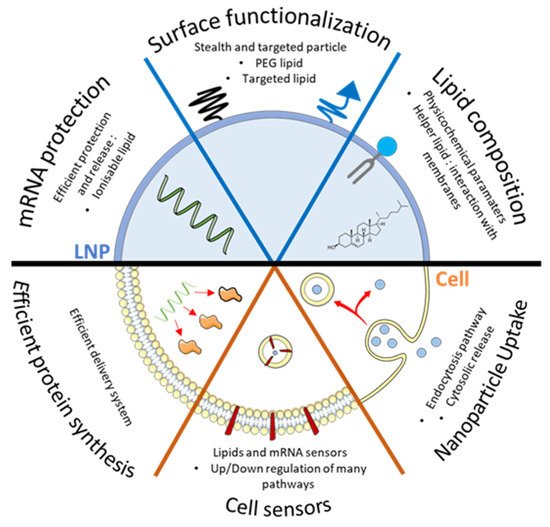 Figure 1. Critical parameter to consider regarding LNPs formulation and cellular interactions. To perform efficient transfection, LNPs should protect mRNA with ionizable lipid until its final destination and should be able to release it efficiently. Surface functionalization through incorporation of targeted lipid will help to reach specific organ/cells while PEGylated lipid will help the circulation of particles in vivo. Finally, incorporation of helper lipids will help either the formation of LNPs or its interaction with biological membrane. Altogether, those lipids need to trigger an efficient cellular uptake of the particle, which leads to the cytosol and avoids the lysosome, without triggering deleterious cell sensors, so that mRNA can lead to an efficient protein production in the cell.

LNPs are part of the latest innovation in terms of a lipidic formulation to deliver mRNA, thanks to the use of microfluidic tools to produce them, but many studies involved other well-known formulations, such as liposome, micelles, or polymers. Liposomes are vesicles formed from lipids (synthetic or natural), which formed a lipid bilayer and an internal space capable of encapsulating molecules such as small drugs [39]. In 1987, Felgner and coworkers used a cationic liposome for gene therapy (with DNA) for the first time, made with DOTMA (N-[1-(2,3-dioleyloxy)propyl]-N,N,N-trimethylammonium chloride), and in 1989, the same team performed transfection with mRNA [40][41]. Complexes made of liposomes and nucleic acids are called lipoplexes; the nucleic acid is embed through the bilayer, thanks to electrostatic interactions [42], which can impact the surface aspect and stability of the liposome, and then the endocytic behavior [43][44].
An interesting delivery platform to consider is light-triggered lipid formulation. In fact, after injection of classic LNPs (locally or systemically), there is no option to physically trigger the endosomal escape. Light-triggered formulations, thanks to specific wavelengths suitable for therapeutic use, allow a precise spatiotemporal release of the cargo inside the cell, which can be needed in some diseases to specifically target organs, or simply to decrease systemic toxicity. Up to date, most of the formulations are liposomes [45], but can also be lipopolyplexes [46], and they show promising results in LNPs formulation [47]. To be triggered by light, different strategies exist based on a photosensitive molecule, e.g., verteporfin (VP), which, under a specific wavelength illumination, can generate reactive oxygen species (ROS) that destabilize the endolysosomal membrane [48][49], or with indocyanine green (ICG), which can absorb and convert light energy into heat to destabilize the membrane [50]. Moreover, lipids can also be light sensitive, e.g., allowing the surface charge of a liposome to change [51], which can serve to enhance systemic circulation when neutral, and cellular uptake/endosomal escape when charged. With a high interest and encouraging results in cancer therapy, thanks to precise drug release, light-triggered formulations have been shown to be capable of nucleic acid release, such as DNA or oligonucleotides, which can lead to a promising platform for mRNA delivery [48][50].
Nevertheless, lipoplexes mRNA therapy could still be interesting for therapeutic purposes. Recently, we showed that co-delivery with lipoplexes of non-structural protein-1 (NS1) mRNA with bone morphogenetic protein-2 (BMP-2) mRNA increases the expression of BMP-2 and osteogenic differentiation into murine pluripotent stem cells [52]. Influenza A virus (IAV) non-structural protein 1 is a multifunctional protein, helping virus replication and virulence, which is known to interact with several proteins (e.g., RIG-I) to inhibit the activation of transcription factors (IRF3/7, NF-kB, etc.) required for IFNs production, leading to anti-viral response and reduced translational activity. C2C12-BRE/LUC cells that stably express luciferase reporter gene under BMP-2 responsive elements (BRE-luciferase), were transfected with lipoplexes containing 1 µg of mRNA with a different ratio between BMP-2 and NS1. When cells are transfected with BMP-2 mRNA alone, luciferase activity decreases by 65% after 48h, and almost completely (91%) after 72 h. When transfected with 0.25 µg of NS1 mRNA and 0.75 µg of BMP2, luciferase activity was 3.5- and 4.7-fold higher at 48 h and 72 h, respectively, and the decrease of luciferase activity was lower after 48 h (54%) and 72 h (85%) (Figure 2) [53]. 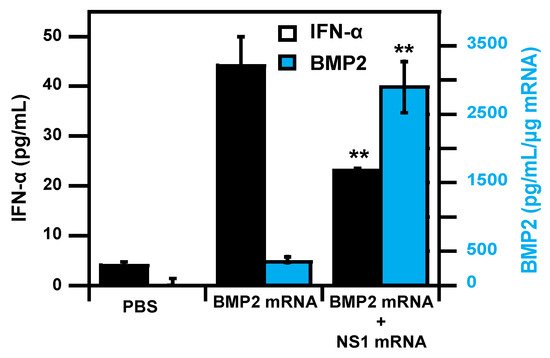 Figure 2. Co-transfection of osteoprogenitor cells with BMP2 mRNA and NS1 mRNA resulted in decreasing type I interferon response together with enhanced therapeutic BMP2 mRNA expression. Adapted from [53] with permission.
Lipopolyplexes (or lipid–polymer hybrid nanoparticles) are ternary complexes formed between a nucleic acid, a polycation, and liposomes. In 1996, Huang et al. showed that the combination of cationic polymer (poly(L-lysine), protamine) with cationic liposome resulted in smaller and more stable particles, with increased transfection efficiency in comparison to lipoplexes [54]. Since then, several studies were performed to deliver different nucleic acids with lipopolyplexes, for example, DNA [55], interfering RNAs [56][57], and mRNA [5][6][58]. Recently mRNA-loaded lipopolyplexes have emerged as a suitable therapeutic that can be used for vaccination [3].