LCZ696 in Patients with Hypertension

Hypertension is a well-known and modifiable risk factor for cardiovascular disease worldwide. However, the management of hypertension remains suboptimal throughout the world. LCZ696 (Sacubitril/valsartan) was approved for the treatment of heart failure. Several randomized control trials showed that LCZ696 achieved the target blood pressure control without significant adverse fffects. This meta-analysis including randomized control trials to precisely determine the effectiveness and safety of LCZ696 for the treatment of high aterial pressure.

Hypertension is a well-known and modifiable risk factor for cardiovascular disease worldwide. A study showed that the number of patients will increase to 1.5 billion by 2025 [1]. However, the management of hypertension remains suboptimal throughout the world [2][3]. Sacubitril/valsartan (LCZ696), a first-in-class angiotensin receptor neprilysin inhibitor, showed superior benefits over enalapril in the PARADIGM-HF trial[4] and was approved for the treatment of heart failure with reduced ejection fraction. Neprilysin inhibition results in blood pressure reduction via natriuresis, vasodilatation, and inhibition of the renin-angiotensin-aldosterone system and sympathetic activity[5]. The dual inhibition of neprilysin and the angiotensin receptor has shown complementary effects in blood pressure reduction. Omapatrilat resulted in superior effects on systolic blood pressure and pulse pressure reduction than enalapril[6], but was not approved due to the unacceptable rate of angioedema.
In recent years, several randomized controlled trials (RCTs) have attempted to compare the antihypertensive efficacy and safety of LCZ696 in hypertensive patients[7][8][9][10][11][12][13][14][15][16]. Most of these prospective and double-blind clinical trials showed that LCZ696 achieved the target blood pressure better without significant adverse effects. In addition, several meta-analyses have concluded that LCZ696 may reduce arterial pressure more efficaciously than placebo, particularly the angiotensin receptor blocker (ARB), without increasing overall adverse events[17][18][19].

The flow diagram of the study selection is shown in Figure 1. In total, we identified 287 studies. Of these, 217 were deemed irrelevant after title and abstract screening, and 70 were assessed for eligibility using the full text. Of the 70 studies, 44 were excluded from the analyses after reading the title and abstracts. In the remaining 26 studies, 16 studies were excluded because of the study design, and the outcomes have not been published. Finally, 10 studies were included in the quantitative synthesis. The 10 studies were conducted in a number of different countries, including the U.S., Spain, Germany, U.K., Japan, Taiwan, and China[7][8][9][10][11][12][13][14][15][16]. A total of 5931 patients were randomized to receive either LCZ696 (at doses ranging from 100 to 400 mg per day) or a comparator drug (olmesartan) in five studies[8][11][13][14], valsartan in three studies[7][10][12], amlodipine in one study[9], and placebo in one study. The duration of the studies ranged from 4 to 52 weeks. The trial design, treatment strategies, and safety and efficacy outcomes of the ten included RCTs are summarized in Table 1. All included RCTs were judged to be at a low risk of bias (supplementary Figure S1). Two authors, HFH and LCC assessed the risk of bias of all included trials. The kappa value was 0.78, p = 0.01. 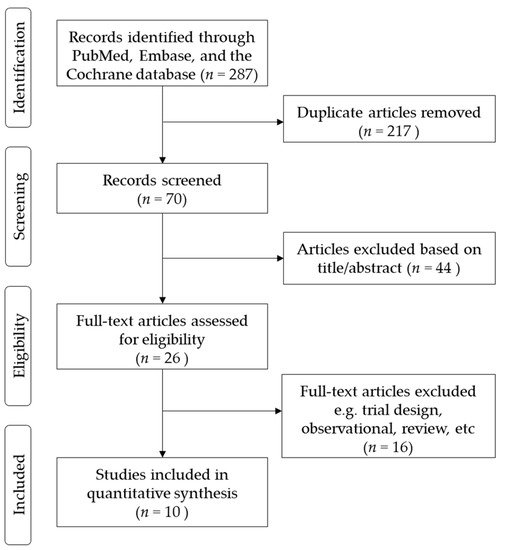 3. Efficacy of the Antihypertensive Effect of Sacubitril/Valsartan (LCZ696)

Both the msSBP and msDBP were calculated in all included studies. The systolic and diastolic blood pressure levels significantly decreased from the baseline after LCZ696 therapy (Figure 2). The pooled weight mean difference (WMD) demonstrated that the blood pressure reductions achieved with LCZ696 were more profound than those found after therapy with olmesartan, valsartan, or placebo. Compared with the comparator therapy (olmesartan in five studies, valsartan in three studies, or amlodipine in one study) or placebo, LCZ696 showed a significant reduction in msSBP with WMD at −6.52 mmHg (95% confidence interval (CI): −8.57 to −4.47; p < 0.001); while the WMD for msDBP was −3.32 mmHg (95% CI: −4.57 to −2.07; p < 0.001). Thereby, evidencing that LCZ696 has greater antihypertensive efficacy with respect to angiotensin receptor blockers or placebo in hypertensive patients at 24–52 weeks. 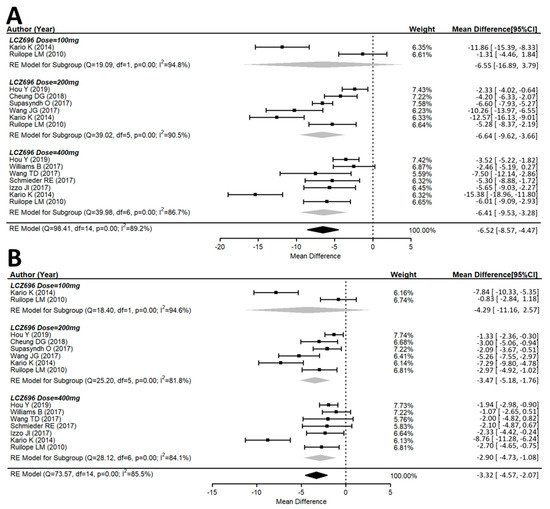 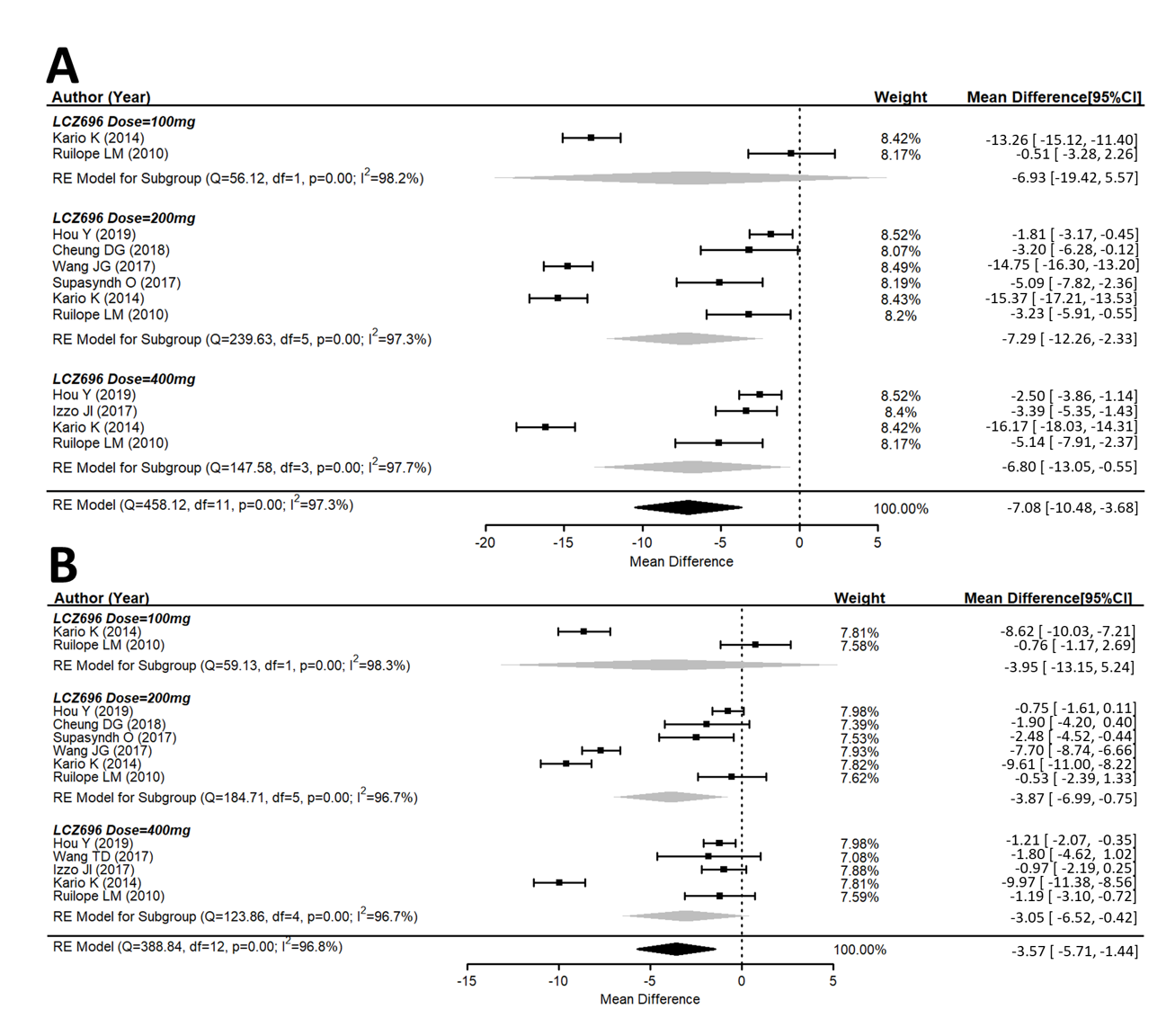 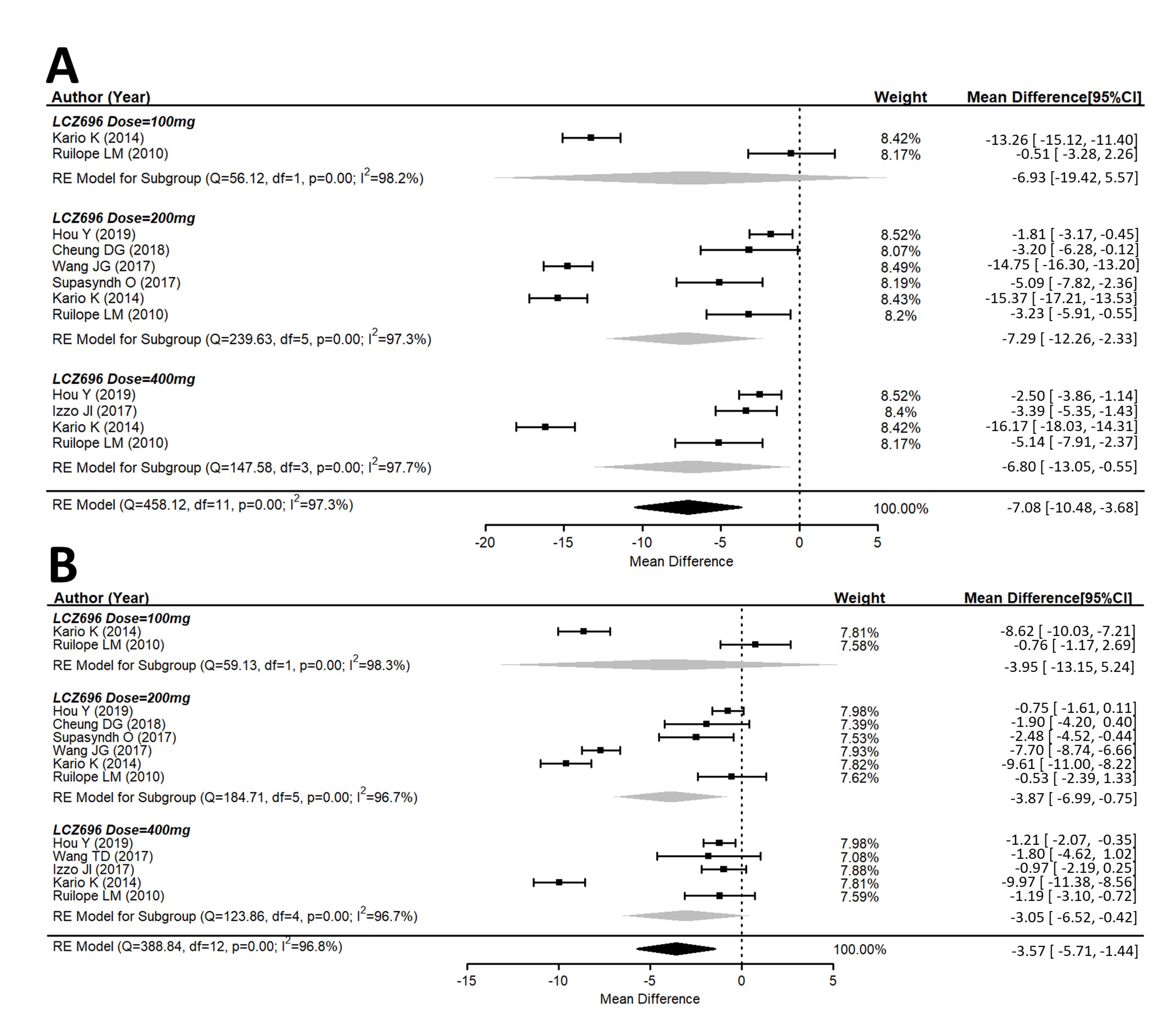 4. Effects of Different Doses of Sacubitril/Valsartan (LCZ696) Versus the Placebo Group

Figure 4. Forest plot of trial-defined adverse events. Comparisons between LCZ696 and a control group.
There were two cases of angioedema in the LCZ696 groups and one case in the olmesartan group, all of which were mild and resolved without hospitalization. Except for angioedema, there was one case of acute hepatitis that was attributed to LCZ696[8], but the patient recovered spontaneously. Drug discontinuation due to medical intolerance was comparable, at about 1% in each group.

6. Adjunctive Evaluations Concerning the Risk of Publication Bias and the Stability of Results

All studies had randomized controlled and double-blind trials, and all the prespecified outcomes were reported. The ten trials were parallel group, multicenter trials. Overall, the included studies were of high quality. The Egger’s test revealed that there was a publication bias that existed in the estimates of pooled effect size of msSBP, but not in other outcomes. (Figure 5) 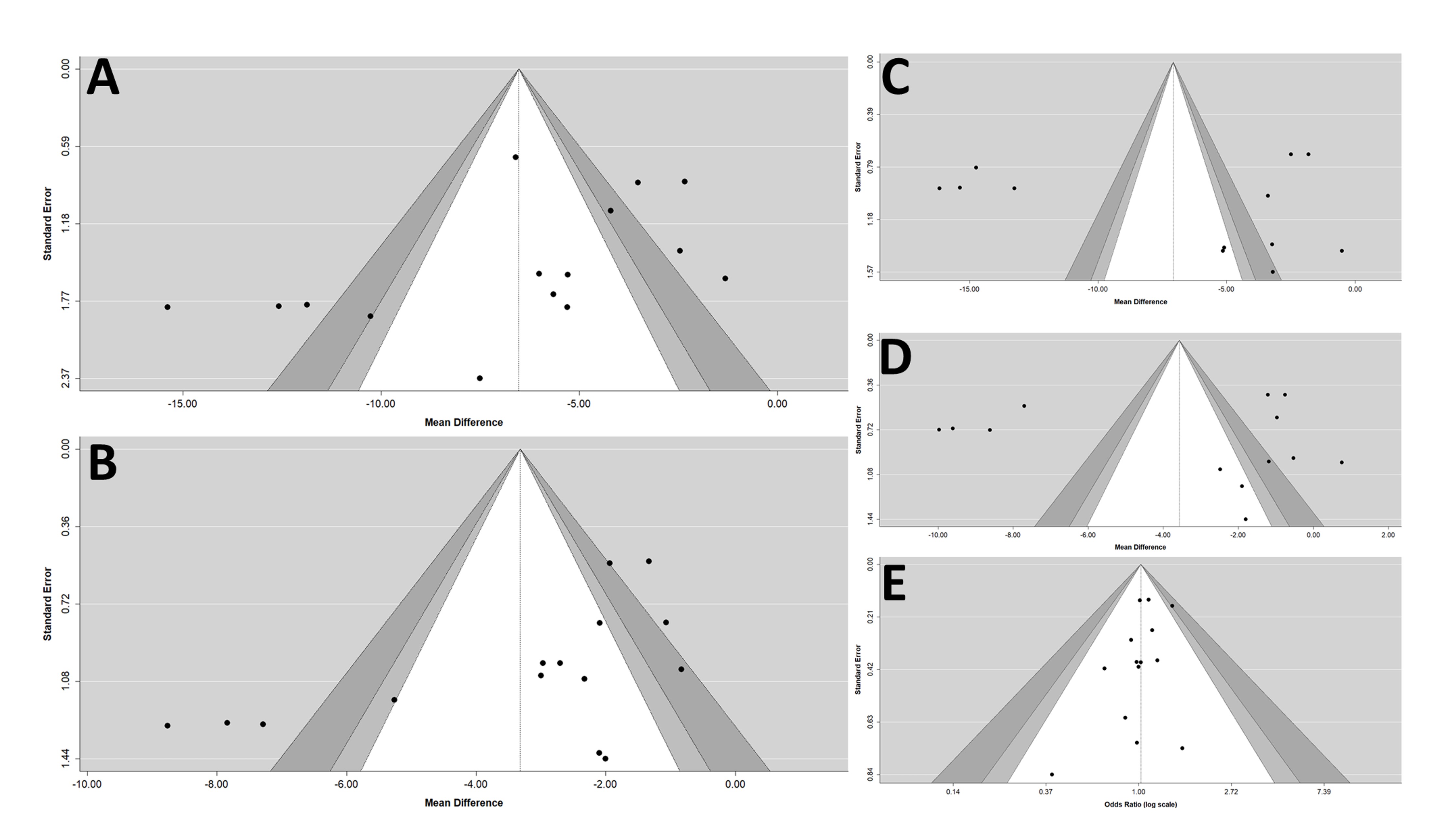