Recent reports suggest a link between positive regulation of the Hippo pathway with bipolar disorder (BD), and the Hippo pathway is known to interact with multiple other signaling pathways previously associated with BD and other psychiatric disorders. In this study, neuronal-like NT2 cells were treated with amisulpride (10 µM), aripiprazole (0.1 µM), clozapine (10 µM), lamotrigine (50 µM), lithium (2.5 mM), quetiapine (50 µM), risperidone (0.1 µM), valproate (0.5 mM), or vehicle control for 24 h. Genome-wide mRNA expression was quantified and analyzed using gene set enrichment analysis (GSEA), with genes belonging to Hippo, Wnt, Notch, TGF- β, and Hedgehog retrieved from the KEGG database. Five of the eight drugs downregulated the genes of the Hippo pathway and modulated several genes involved in the interacting pathways. We speculate that the regulation of these genes, especially by aripiprazole, clozapine, and quetiapine, results in a reduction of MAPK and NFκB pro-inflammatory signaling through modulation of Hippo, Wnt, and TGF-β pathways. We also employed connectivity map analysis to identify compounds that act on these pathways in a similar manner to the known psychiatric drugs. Thirty-six compounds were identified. The presence of antidepressants and antipsychotics validates our approach and reveals possible new targets for drug repurposing

The Hippo pathway is a signaling cascade that integrates a broad range of different biological, chemical, and mechanical cues to control several cellular processes through its downstream effectors YAP (yes-associated protein) and transcriptional co-activator with PDZ-binding motif (TAZ) [1][2]. It was first discovered in Drosophila melanogaster, where a genetic mutation in one of its core components (Hippo/Hpo) was associated with tissue overgrowth of the eyes, wings, and limbs, a phenotype that gave name to the pathway [1]. The Hippo pathway regulates cell proliferation, differentiation, and spatial patterning governing organ size, tissue homeostasis, and regeneration, and is highly conserved from Drosophila to mammals [1][2].
The canonical Hippo signaling pathway is a key regulator of organ size and tissue remodeling [2]. The non-canonical Hippo signaling pathway, due to its diverse interplay with a variety of signaling cascades, i.e., TGF-β, Wnt, Hedgehog (HH), and Notch signaling pathways [3], has been associated with diversified mechanisms according to different microenvironments [4]: neurogenesis [5], neuronal development [6], neuronal dendritic field formation [7][8], and, more recently, neuroinflammation [9] and immunology [10]. In the central nervous system, the Hippo pathway has been associated with the response to neuroinflammation [11], dendrite development and organization [7], the balance between apoptosis and proliferation of the neural progenitor cell pool [12], glioma proliferation [13], Huntington’s disease [14], and Alzheimer’s disease [15].
Due to its role in both healthy and pathologic processes in the central nervous system and its crosstalk with other signaling pathways, it is unsurprising that the genes involved in the Hippo pathway have recently been associated with various psychiatric conditions [16][17][18][19]. Indeed, Liu and colleagues [18], identified positive regulation in the transcription of Hippo pathway genes in post-mortem prefrontal cortex of bipolar disorder (BD) patients as significantly enriched compared to healthy controls. Together with 30 hub genes, including YAP, the authors suggested that this pathway might have important implications in understanding the pathophysiology of BD, and could be a source of new targets for treatment. Further, the Hippo pathway genes were also reported as hypermethylated in a twin affected with BD compared with the non-affected twin [16]. Although the Hippo pathway was not differentially methylated in a second pair of twins, the authors proposed that the patient-specific differences might reflect the effects of antipsychotic medications, resulting in hyper/hypomethylation differences. In addition, different components of the Hippo pathway appear to be targeted by chlorpromazine, an antipsychotic used to treat schizophrenia (SZ), leading to apoptosis in cancer cells [20]. Valproic acid used to treat BD is reported to interact with the Hippo pathway through RASSF1A in myeloid leukemia, allowing YAP to associate with p73 and induce the expression of pro-apoptotic genes [21].
Therefore, this study aimed to evaluate the effects of commonly prescribed psychoactive drugs used in treating affective disorders (BD and SZ) on the expression of genes in the Hippo pathway. We expect these medications to downregulate the genes involved in the Hippo pathway, as upregulation of the Hippo pathway was previously observed in people with BD compared to healthy controls [18]. 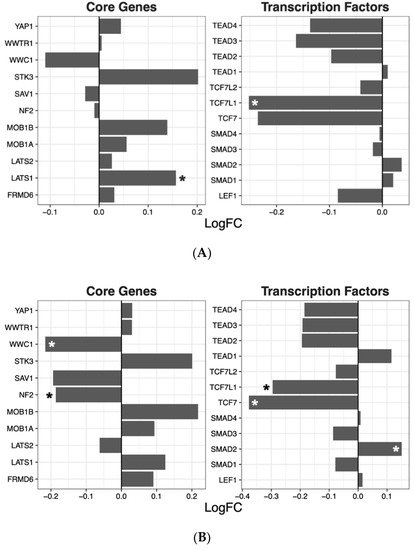 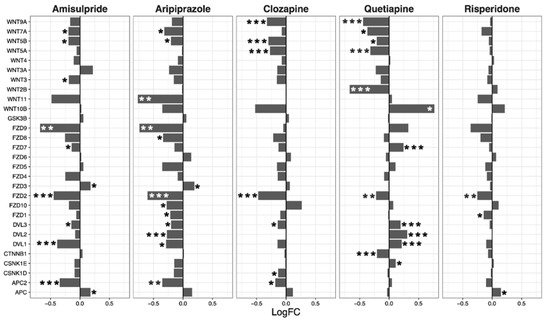 Figure 2. Wnt signaling pathway genes regulated by psychotropic drug treatment in NT2-N cells expressed as log fold change relative to vehicle-treated cells. * p < 0.05, ** p < 0.005, and *** p < 0.001.
Overall, amisulpride (p = 0.0032), aripiprazole (p = 0.043), and clozapine (p = 0.0033) reduced the expression of genes in the notch signaling pathway. Again, quetiapine increased or decreased the expression of several genes in the pathway, but did not have a significant overall effect (Figure 3). 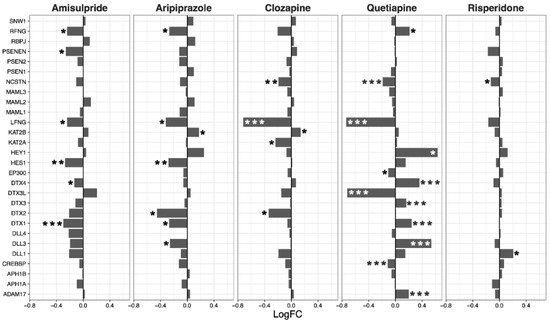 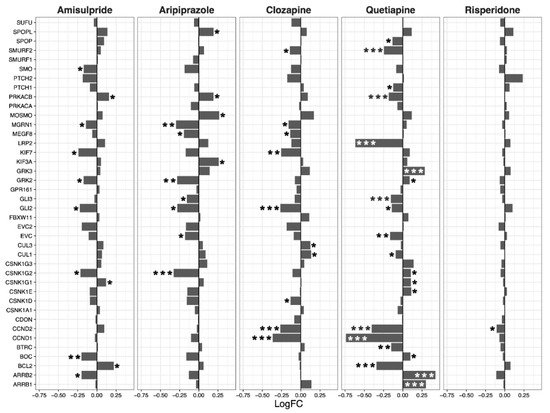 Figure 4. Hedgehog signaling pathway genes regulated by psychotropic drug treatment in NT2-N cells expressed as log fold change relative to vehicle-treated cells. * p < 0.05, ** p < 0.005, and *** p < 0.001.
Although no overall significant effects were observed in the regulation of the TGF-β pathway, several genes were up- or downregulated by the different drugs, with a tendency to be downregulated by clozapine (p = 0.07) and risperidone (p = 0.06) (Figure 5). 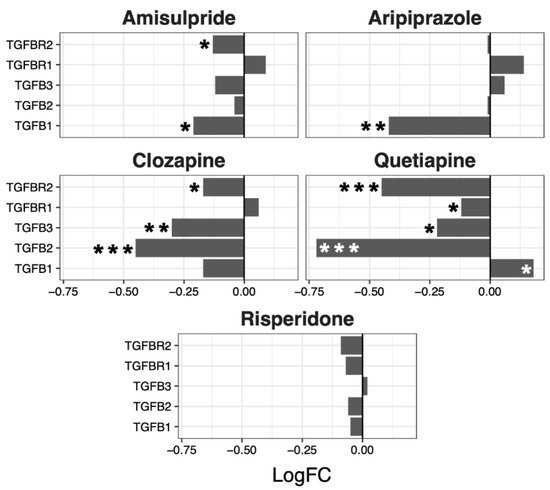 The genes in these signaling pathways that were regulated by the five drugs in the same direction (n = 22 genes with evidence of mean log fold change compared with the vehicle of p < 0.1; Table S1) were submitted for CMap analysis, which identified 36 drugs with a positive CMap enrichment score of >0 and p < 0.05 (Table 3).
Table 3. Compounds that affect the expression of the gene expression signature genes similar to the five drugs that affected the Hippo pathway.

Downregulation of NF2 and WWC1 was observed following administration of aripiprazole, clozapine, and quetiapine. Likely consequences include reduced inflammatory signaling mediated by MST1/2 and NF2, and reduced MAPK and NFκB activity levels following upregulation of YAP/TAZ. Aripiprazole also downregulates T-cell factors, potentially compromising Wnt signaling [22].
Several authors have demonstrated that MST1/2 directly regulates many aspects of immune activation and the activity of inflammatory pathways [23][24]. Examples of pathways upregulated include MAPK (mitogen-activated protein kinase) and p53 [25]. MST1/2 also plays a major role in Toll-like receptor (TLR) signaling and subsequent activation of NFκB and pro-inflammatory cytokine production [26][27]. Similarly, YAP deletion in astrocytes induced JAK-STAT pathways, inducing reactive astrogliosis, microglial activation, and BBB dysfunction in mice [28].
When considered as a whole, the net effects of these changes would reduce pro-inflammatory signaling mediated by MAPK and NFκB. This is of interest as aripiprazole [29], quetiapine [30], and clozapine [31][32] are known to inhibit NFκB. The data produced in this study suggests that such inhibition may be achieved, at least in part, by effects on Hippo, Wnt, and TGFβ signaling (Figure 6). 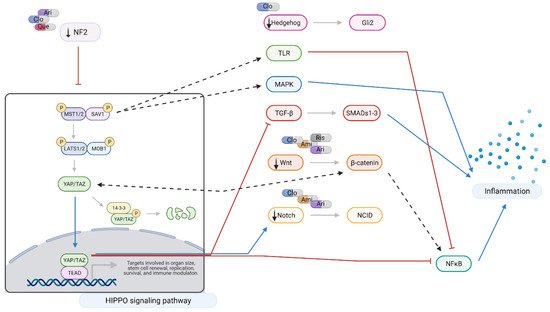