Sour cherries (Prunus cerasus L.) and sweet cherries (P. avium L.) are economically important fruits with high potential in the food industry and medicine. In this study, we analyzed fungal communities associated with the carposphere of sour and sweet cherries that were freshly harvested from private plantations and purchased in a food store. Following DNA isolation, a DNA fragment of the ITS2 rRNA gene region of each sample was individually amplified and subjected to high-throughput NGS sequencing. Analysis of 168,933 high-quality reads showed the presence of 690 fungal taxa. Investigation of microbial ASVs diversity revealed plant-dependent and postharvest handling-affected fungal assemblages. Among the microorganisms inhabiting tested berries, potentially beneficial or pathogenic fungi were documented. Numerous cultivable yeasts were isolated from the surface of tested berries and characterized by their antagonistic activity. Some of the isolates, identified as Aureobasidium pullulans, Metschnikowia fructicola, and M. pulcherrima, displayed pronounced activity against potential fungal pathogens and showed attractiveness for disease control.

Sour cherries (Prunus cerasus L.) and sweet cherries (P. avium L.) belong to the family of the Rosaceae [1] and are economically and agronomically important crops. These species are cultivated in temperate and cool regions and characterized by a scattered distribution from the Black Sea to Ireland and Spain, and from Scandinavia to Africa [2]. Cherry fruits are a nutrient-dense food with relatively low caloric content, important nutrients, and significant amounts of bioactive food components, having positive effects on human health [3].
Sour cherry is cultivated for its sharp and juicy fruits that are mostly destined to produce foods like jam, jelly, and syrup or alcohol beverages such as wine, brandy, and fruit beer [1][4]. The current research suggests that intake of fresh sour cherry berries or juice promotes health due to the positive action of anthocyanins and phenolic compounds [3][5]. The consumption of cherries may reduce the risk of arthritis, cancer, cardiovascular disease, and diabetes, and may improve sleep and cognitive functions [3].
Sweet cherry is one of the most economically important fruit species in the world. Most sweet cherry fruits are consumed fresh or processed as frozen, dried, or juiced [3]. Sweet cherry berries are rich in bioactive compounds, including flavonoids, anthocyanins, carotenoids, vitamins, ascorbic acid, and potassium [6] Both laboratory assays and clinical trials have demonstrated the anti-inflammatory, antimicrobial, and anticarcinogenic properties of sweet cherry fruits and their metabolites [6][7][8].
The plant carposphere is highly colonized by various bacterial and fungal microorganisms, the distribution of which is affected by geographic location, climatic conditions, plant species, ripening stage, and growing methods [9][10][11]. Some epiphytic plant-associated microorganisms demonstrate beneficial features, produce secondary metabolites improving resistance in the plant, and impact the structure of the microbial population [12][13][14]. On the other hand, some fruit-inhabiting microorganisms are recognized as pathogenic to hosting plants and humans and are responsible for significant economic losses and serious health problems [15][16]. Therefore, postharvest handling and processing of fruits encounter exceptional attention due to the control of microbiological hazards [17][18].
The scarcity of works characterizing sweet and sour cherries microbial communities are of certain importance. Based on high-throughput sequencing of the 16S rRNA gene, the nitrogen-fixing bacterial community inhabiting Prunus avium L. leaves was described [19] and bacterial diversity of pitted sweet cherries, proceeded high-hydrostatic pressure processing, was evaluated [20]. Endophytic fungi associated with Prunus avium and Prunus cerasus trees located in Germany and Iran were isolated and examined by morphological and molecular analysis [21][22]. Microorganisms present on different cultivars of sour cherries in Hungary were evaluated using cultivation techniques only [18]. It was demonstrated that the frequency of distribution of bacteria, molds, and yeasts were very similar in spite of different cultivars, growing methods, and growing years [18]. To the best of our knowledge, there is no information on sweet and sour cherries carposphere-associated fungal microorganism communities.

2. Mycobiota in the Carposphere of Sour and Sweet Cherries and Antagonistic Features of Potential Biocontrol Yeasts

2.1. Abundance and Diversity of Fungal Microbiota on P. cerasus and P. avium

The fungal community of sweet and sour cherry samples was revealed by Next Generation Sequencing (NGS) of the ITS2 region of fungal rDNA amplified from total DNA extracted from the surface of cherry samples. Illumina MiSeq sequencing generated a total of 257,984 raw reads. After data quality filter processing, the number of high quality ITS reads for sweet and sour cherries was 168,933 with an average of 18,770 sequences per sample (range 17,104–21,140) (Table 1). The clustering of the sequences at 97% sequence identity generated a total of 690 ASVs (Table 1). The highest number of ASVs was observed in sour cherries harvested from private plantation 317 [109 ± 5.77, hereafter median for 3 samples ± standard deviation], next followed sweet cherries 194 [71 ± 10.97], and the lowest number was in store-purchased sour cherries 179 [58 ± 14.57] (Table 1).
Table 1. Total sequences obtained for fungal community samples of sour (PC-PL) and sweet (PA-PL) cherries freshly harvested from private plantations as well as food store sour cherries (PC-FS).
The mycobiota analysis according to the nonparametric Kruskal–Wallis test showed significant differences in fungal diversity amongst sour and sweet cherries collected from private plantations.
Alpha diversity metrics, such as Shannon diversity index (p = 0.049) and Pielou’s measure of evenness index (p-value 0.0495) were statistically different between PC-PL and PA-PL samples (Figure 1). The observed number of ASVs revealed a significant difference in fungal community richness between PC-PL vs. PA-PL as well as PC-PL vs. PC-FS samples (ASVs index p-values were 0.043 and 0.046, respectively). In agreement with ASV data, Shannon’s diversity and the Simpson estimates revealed that sour cherries had higher fungal diversity than sweet cherries or food store cherries (Table 1). No statistical differences in alpha diversity metrics were detected between sweet cherries collected from the private plantation and sour cherries from a store (Figure 1). 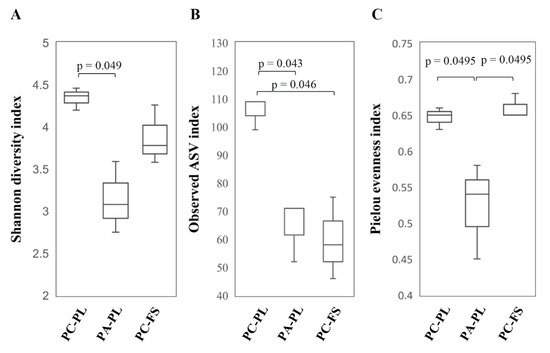 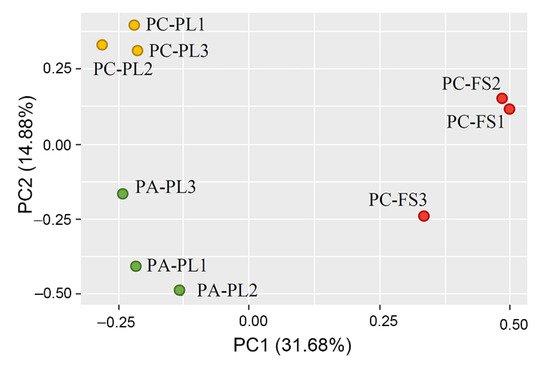 Figure 3. Mycobiota composition on sour (PC-PL) and sweet (PA-PL) cherries sampled from private plantations, and sour cherries (PC-FS) purchased in a food store. Relative abundance of sequences classified at the phylum (A) and genus (B) level. The taxonomic groups comprising less than 1% of the total composition were assigned to “Other”.
In store-purchased sour cherry samples, two phylum Ascomycota and Basidiomycota were distributed equally (the relative abundance was 51.37% and 48.43%, respectively) (Figure 3A). From the first phylum prevailed Aureobasidium (27.35%), Hanseniaspora (6.96%), and Cladosporium (6.46%) genera, and were mainly represented by A. pullulans, H. uvarum, and C. cladosporioides (Figure 3B, Table S1). The Basidiomycota were dominated by yeast from Vishniacozyma (23.32%), Rhodotorula (7.88%), and Filobasidium (6.10%) genera, with the most abundant species being Vishniacozyma heimaeyensis, V. victoriae, Rhodotorula graminis, and Filobasidium wieringae (syn. Cryptococcus wieringae) (Figure 3B, Table S1).
A heatmap illustrates the distribution of the most abundant fungal ASVs (Figure 4) revealing the differences between all three groups of berries—freshly harvested sour and sweet cherries, and sour cherries purchased from a local food store. 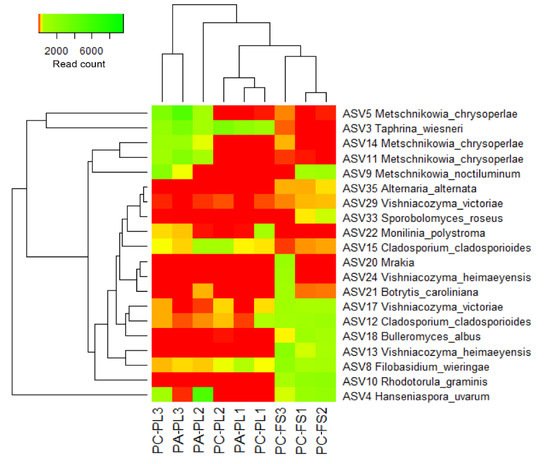 2.3. Distribution of Cultivable Yeasts on P. avium and P. cerasus

A culture-based method was used to estimate viable yeast abundance and diversity on sweet and sour cherries. There was no noticeable difference in the overall quantity of yeasts between the samples of sour and sweet cherries collected from private plantations. The viable yeast population on the carposphere of freshly harvested sour cherries was 6.07 ± 0.31 log CFU/g and on sweet cherries was 5.93 ± 0.25 log CFU/g. However, sour cherries from a food store did exhibit about 10-fold higher CFU of yeasts per gram of berries (7.17 ± 0.12 log CFU/g) than freshly sampled berries. Representatives of phenotypically distinct colonies were randomly selected and applied for molecular identification by sequencing of the internal transcribed spacer ITS and/or D1-D2 domains of ribosomal DNA. According to the high similarity of generated sequences to those deposited in the GenBank database, yeast species were identified (Table S2).
In total, 17 yeast species representing 10 genera were detected on freshly picked and food store samples (Table S2). Based on the diversity of isolated yeasts, sample-based variations in both types of berries were observed. A. pullulans yeasts were recovered from all tested samples and were the most dominant in PC-PL1 (84%), PC-PL2 (69%), and PA-PL1 (92%) samples (Figure 5, Table S2). Species from Metschnikowia genus (M. pulcherrima, M. fructicola, M. sinensis, and M. viticola) were detected on most tested berries with a high prevalence on freshly harvested PC-PL3 (64%) and PA-PL3 (69%) samples (Figure 5).

Figure 5. Relative abundance of yeasts isolated from the surface of sour and sweet cherries. Samples of: freshly harvested sour cherries—PC-PL, freshly harvested sweet cherries—PA-PL, food store sour cherries—PC-FS.
Hanseniaspora uvarum yeasts were isolated from all samples except for PC-PL1 and PA-PL1. The highest quantities of H. uvarum were detected on sweet cherries PA-PL2 (43%) and food store sour cherries in samples PC-FS1 and PC-FS2 (about 30% in both). The genus Rhodotorula was represented by the species R. graminis, R. glutinis, and R. babjevae, and formed 5–6% of the total yeast’s population on the food store cherries. Species from Cryptococcus genus (C. wieringae and C. pinus) were observed in sour cherry samples PC-PL2 (29%), PC-PL1 (16%), PC-FS3 (14%), and in sweet cherry PA-PL1 (8%). Some yeast species were not picked up by the direct dilution method and were only detected in low quantities after applying culture enrichment. These species include Pichia kluyveri, Saccharomyces paradoxus, Saccharomyces cerevisiae, and Torulaspora delbrueckii (Table S2). 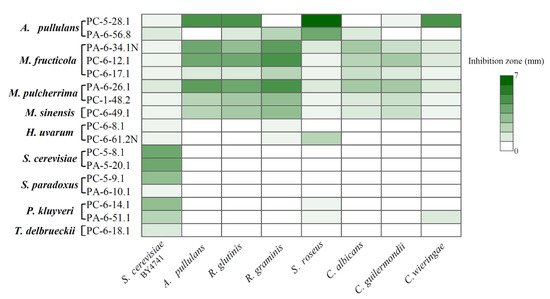 Figure 6. Antagonistic activity of yeasts inhabiting P. cerasus and P. avium surface.
Yeast strains with killing properties were used for the evaluation of antagonistic activity against fungal microorganisms from Aureobasidium, Candida, Cryptococcus, Rhodotorula, and Sporobolomyces genera (Figure 6, Figure S3). Some of these species may be attributed to potential pathogens [1][2][3][4][5][6]. The halo of inhibition was dependent not only on the species but also on the strain.
Among tested yeasts, M. pulcherrima, M. fructicola, and M. sinensis (in total six strains) exhibited the broadest spectrum of antagonistic activity by inhibiting the growth of all tested yeast species (Figure 6). The highest activity was demonstrated by M. fructicola PA-6-34.1N and PC-6-12.1, as well as M. pulcherrima PA-6-26.1 yeasts against A. pullulans, R. graminis, and R. glutinis species. Potential human pathogens C. albicans and C. guilermondii were also killed effectively by all tested Metschnikowia strains. The weakest antagonistic activity of Metschnikowia spp. strains were determined against C. wieringae and S. roseus species. A. pullulans strains PC-5-28.1 and PA-6-56.8 were active against six and five species, respectively. The highest killing activity of A. pullulans PC-5-28.1 strain was observed against S. roseus, C. wieringae, and non-killer A. pullulans strains. This yeast-like fungus was able to suppress the growth of potential human pathogens R. glutinis and C. guilermondii. The antagonistic activity of another A. pullulans strain PA-6-56.8 was detected against both Rhodotorula species, C. albicans, and S. roseus yeasts. H. uvarum PC-6-61.2N and P. kluyveri PA-6-51.1 strains demonstrated killing activity against three yeast species. In addition to antagonistic activity against S. cerevisiae and S. roseus, the P. kluyveri PA-6-51.1 strain also inhibits the growth of C. wieringae, while H. uvarum PC-6-61.2N acts against R. graminis. The rest of the tested yeast strains demonstrated antagonistic activity against one or two yeast species.

This is the first manuscript characterizing fungal communities on sweet and sour cherry fruits by applying NGS approach and cultivation-based techniques. Our data show the plant-conditioned prevalence of microorganisms and demonstrate the influence of postharvest handling, such as food store management, on the structure of mycobiota. Investigation of microbial ASVs diversity showed a clear separation of fungal assemblages on freshly harvested and food store cherries. Among the fungi inhabiting tested berries, potentially beneficial or pathogenic fungi were documented. Numerous cultivable yeasts were isolated from the surface of tested berries and evaluated for their antagonistic activity. The prominent antagonistic activity of cultivable yeasts isolated from freshly harvested cherries against potential pathogens highlights the attractiveness of these strains for the management of disease control.