Hodgkin lymphoma (HL) is a rare neoplasm of the lymphatic system representing one of the most common cancers in young adults. The disease is characterized by a low number of malignant cells (Hodgkin- and  Reed-Sternberg cells) deriving from B-lymphocytes and an extensive inflammatory microenvironment This unique histopathological picture and its pathogenesis are still only partially understood.

The incidence of Hodgkin lymphoma is estimated to be 2–3 per 100,000 individuals per year with a peak in the third decade of life and a second peak around 60 years.[1]

Various factors seem to favor the occurrence of HL. The significantly increased risk of identical twins strongly indicates the role of genetics in HL. Epstein–Barr virus (EBV) is detected in nearly 45% of HL patients.[2] EBV infection seems to be a relevant factor in pathogenesis and HIV infection associates with elevated risk but both are not sole contributors.[3]

Histopathologically, 95% of HL cases are classified as classical (cHL) including the subtypes nodular sclerosing, mixed cellularity, lymphocyte-rich and lymphocyte-depleted HL. In 5% of cases, Nodular lymphocyte-predominant Hodgkin Lymphoma (NLPHL) is diagnosed.[4] While cHL is characterized by the presence of CD30-expressing Hodgkin and Reed-Sternberg (HRS) cells surrounded by a mixture of inflammatory cells, the malignant cells in NPLHL are termed lymphocyte predominant (LP) cells. They are positive for CD20 and lack CD30. These cells are surrounded by mature lymphocytes.

cHL is a B-cell lymphoma of germinal center origin that has lost its B-cell phenotype. HRS cells harbor clonal rearrangements of hypermutated, class-switched immunoglobulin genes, which result in non-functional immunoglobulin genes lacking the expression of cell surface B-cell receptor. In a healthy B-cell, this should lead to apoptosis, however in HL, these cells appear to be “rescued” from apoptosis by additional oncogenic events.[5][6]

Genomic analyses of HRS cells have shown that certain genetic aberrations significantly contribute to their altered interaction with the inflammatory microenvironment. Reduced MHC class I or II presentation on their surface, either by downregulation, loss-of-function mutations (B2M) or translocations (CIITA) impair antigen presentation.[8] HRS cells frequently harbor an increased copy number of genes located on chromosome 9p24.1 encoding programmed death receptor ligands PDL1 and 2. Overexpressed PDL1/L2 interacts with PD1 on many types T cells in the HL microenvironment. Furthermore, NK-cell mediated antitumoral immune response might be inhibited by aberrant expression of MICA in HRS cells.[9] The complex interactions of HRS cells with their inflammatory environment are not completely understood.[10]

Removal and histopathological analysis of a lymph node is the method of choice for diagnosis. Since diagnosis can be complicated, pathological expert review is recommended. Detailed patient history including evaluation of B-Symptoms, clinical examination and imaging procedures including contrast-enhanced CT (ceCT) and 18FDG-Positron emission tomography (PET/CT), if available, are regarded as mandatory for initial staging. Moreover, PET/CT is highly sensitive to detect bone marrow involvement and allows omission of the bone marrow biopsy in the case of PET negativity.[11] Individual stages of HL are differentiated using the modified Ann-Arbor classification and defined risk factors. Risk stratification varies between Europe and North America. In Europe, three different risk groups are relevant including early-stage favorable, early-stage unfavorable and advanced stage HL

Since chemo- and radiotherapy can potentially affect the fertility of patients, all patients should be offered the possibility of fertility maintenance measures if family planning is not finalized. [12]

The current standard for early-stage favorable cHL consists of two cycles of doxorubicin, bleomycin, vinblastine, and dacarbazine (ABVD) and consolidation involved-site (IS) radiotherapy with 20 Gray (Gy). Long time follow-up analyses of GHSG HD10 trial showed progression free survival rates of 87%  and overall survival rates of 94% for this approach.[13] Omitting parts of the ABVD regimen and PET-guided omission of radiotherapy resulted in a significantly reduced tumor control.[14]

Patients with initial diagnosis of early-stage unfavorable HL are usually treated with four cycles of polychemotherapy. Depending on response and intensity of systemic therapy, a consolidation radiotherapy is applied. The recently completed GHSG HD17 trial showed that patients who are PET-negative after 2 cycles of eBEACOPP + 2 cycles of ABVD (“2+2”) do not require consolidating 30 Gy INRT radiotherapy (involved node RT).[15]

Patients with advanced-stage cHL are more likely to relapse or have refractory disease and therefore require a more intensive treatment. Internationally, treatment with six cycles of ABVD and consecutive PET-adopted radiotherapy remains the standard therapy for advanced stages in many countries.[16] However, the eBEACOPP regime results in more frequent and long-lasting remissions. A meta-analysis comprising almost 10,000 patients from 14 different studies comparing ABVD with eBEACOPP showed a significant survival benefit of 7% compared to ABVD in the advanced stages of HL.[17] Therefore, the treatment of advanced stage HL with eBEACOPP represents the standard of care by EORTC, LYSA and GHSG. Based on the results of the GHSG HD18 study achieving a 5-year PFS of 90–92%, the current GHSG standard for patients in advanced stages under 60 years of age consists of four or six cycles of eBEACOPP—depending on the early PET-based response after the second cycle—followed by PET-based radiotherapy. [ref When given after two initial cycles of eBEACOPP, a de-escalation of the treatment by switching to ABVD appears be feasible, as shown by the LYSA AHL2011 trial.[18] The ongoing GHSG 21 trial evaluates a different approach to further reducing chemotherapy- associated acute and long-term toxicity in advanced stage cHL: the combination of BV with a modified eBEACOPP regimen termed BrECADD. The Echelon-1 trial aimed improving tumor control in advanced cHL patients by adding the anti-CD30 immunoconjugate Brentuximab Vedotin to AVD. This resulted in improved tumor control over ABVD, however also showing an significantly increased toxicity.[19] 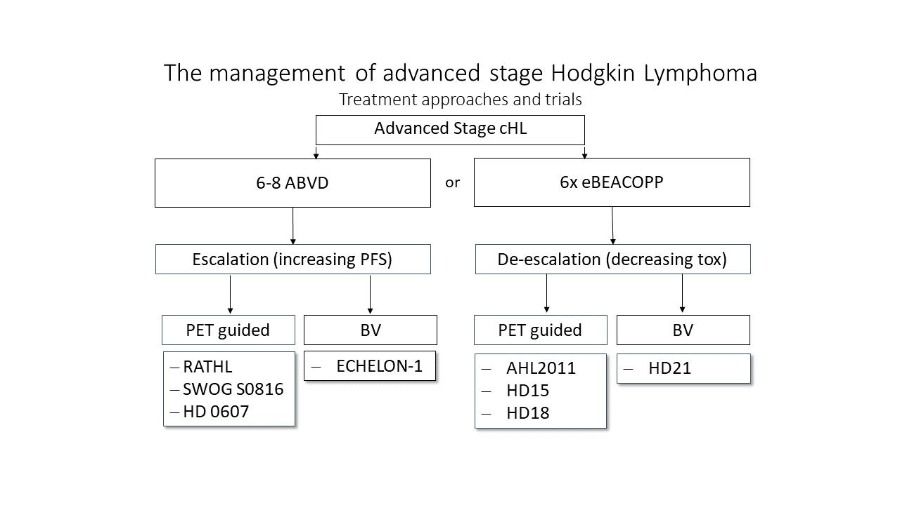 Following front-line treatment failure, the application of an intensive salvage chemotherapy followed by high-dose chemotherapy (HDCT) and autologous stem cell transplant (ASCT) is regarded as the standard of care. This approach results in a cure rate of about 50%.[21] Based on the results of the AETHERA trial, consolidating use of brentuximab vedotin after ASCT results in significant improvement of disease control and thus is approved for high-risk patients.[22]

With the approval of the anti-CD30 immunoconjugate BV and the anti-PD1 antibodies Nivolumab and Pembrolizumab, new treatment options have become available and resulted in high response rates even in chemotherapy-refractory and heavily pretreated cHL patients.

In the pivotal phase II trial, evaluating BV as monotherapy in cHL patients with relapse after ASCT, a response rate of 75% and a median PFS of 9.3 months in cHL patients were documented.[23] In patients achieving a complete response with BV, 34% of these patients treated in a phase II trial, a 5-year PFS of 52% was documented indicating a potentially curative role of BV in a minority of patients with r/r cHL after ASCT.[24] The idea to re-activate exhausted T-lymphocytes in the microenvironment of cHL by blockade of the checkpoint molecule PD1 revolutionized the treatment of r/r cHL: the application of Nivolumab and Pembrolizumab in the pivotal phase I/II trials resulted in response rates of about 70% and a median PFS of 13-15 months in patients with prior ASCT and Brentuximab.[25][26] Although the rate of complete responses achieved with Nivolumab and Pembrolizumab in these trials was rather low and most patients relapsed within the follow-up period, excellent overall survival rates of over 80% after 2 years could be documented. The question whether BV or an anti-PD-1 antibody should be used in case of relapse after ASCT was addressed in the Keynote-204 trial (NCT02684292): With a median follow-up of 24.7 months a significant PFS improvement in the pembrolizumab vs BV arm was observed so that Pembrolizumab should be discussed as a new standard for patients with relapse after autologous SCT.[27] 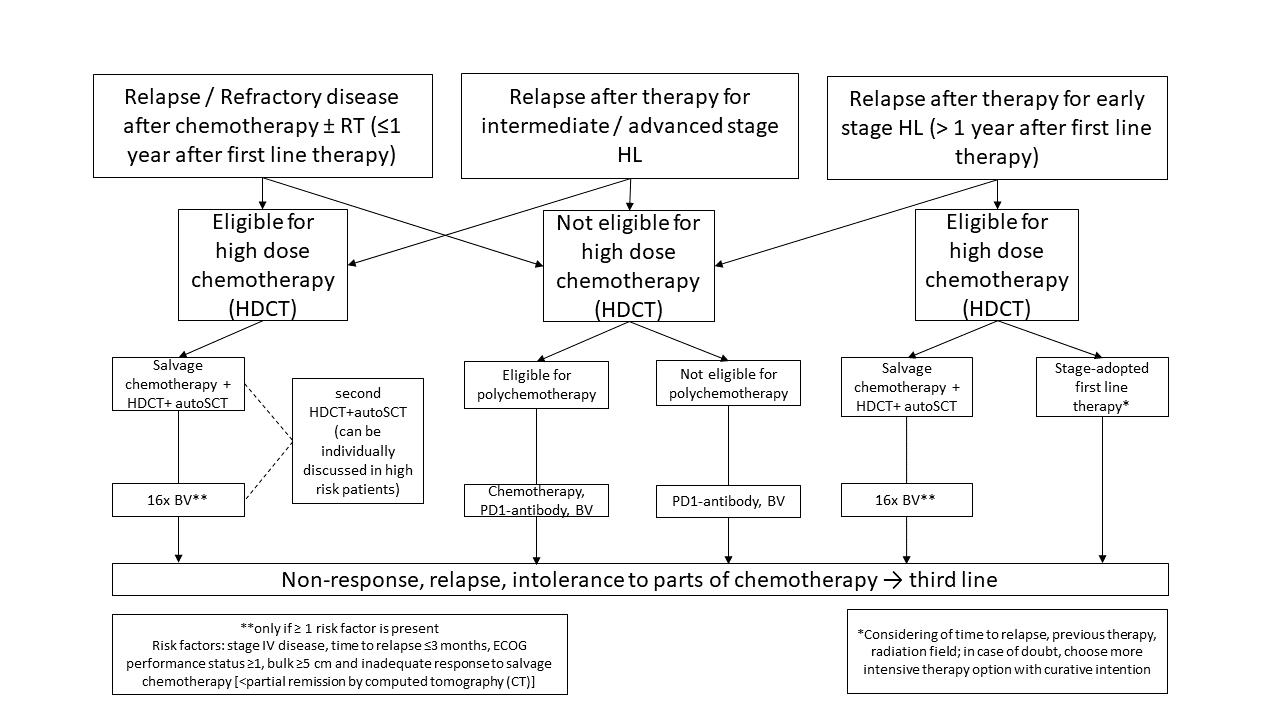 Nodular lymphocyte-predominant HL (NLPHL) accounts for approximately 5% of all HL cases. Pathological and clinical characteristics differ from cHL. Histopathologically, the malignant lymphocyte predominant cells in NLPHL are consistently positive for CD20, but often lack CD30. Clinically, most cases are diagnosed in early stages and the course is usually indolent. However, a tendency towards late relapses and histological transformation into aggressive B-cell non-Hodgkin lymphoma (B-NHL) has been described.[28]  At most institutions, the standard treatment for stage IA NLPHL without clinical risk factors consists of limited-field RT alone. Different retrospective studies have demonstrated that the addition of chemotherapy does not further improve the results obtained with RT alone.[29] All other stages are domain of combined modality treatments consisting of chemotherapy and radiotherapy approaches, identical to those used for classical Hodgkin lymphoma in first line treatment. Overall, patients with NLPHL have an excellent outcome after stage-adapted first-line treatment. In relapse settings, antibody treatment against the protein CD20 can be considered.

The introduction of Brentuximab Vedotin and PD-1 inhibitors such as Pembrolizumab and Nivolumab has opened up new treatment options for Hodgkin lymphoma.[34] The introduction of checkpoint inhibitors and their success in the treatment of relapsed/refractory cHL suggest that an implementation of these drugs in first-line treatment approaches enables new, less toxic and effective treatment strategies in the near future.