Epstein–Barr virus (EBV) is a human pathogen that infects most of the world’s population and is associated with several well-known malignancies. Within the nucleus, the replicated viral DNA is packaged into capsids, which subsequently egress from the nucleus into the cytoplasm for tegumentation and final envelopment. There is increasing evidence that viral lytic gene expression or replication contributes to the pathogenesis of EBV. Various EBV lytic proteins regulate and modulate the nuclear envelope structure in different ways, especially the viral BGLF4 kinase and the nuclear egress complex BFRF1/BFRF2.

1. The Structure and Function of the Nuclear Envelope

In higher eukaryotic cells, the nucleus is surrounded by an envelope composed of the inner and outer nuclear membranes, the perinuclear space between the membranes, and the underlying nuclear lamina network (Figure 1A). These three-layer structures are held in place by the nuclear pore complex (NPC), which functions as a transport gatekeeper for macromolecules trafficking in or out of the nucleus. The outer nuclear membrane is continuous with the rough endoplasmic reticulum. The nuclear lamina is a thin, electron-dense meshwork lining the nucleoplasmic face of the inner nuclear membrane (INM) [1][2] and provides firm structural support for the major components of the nuclear envelope (NE) [3][4]. The integrity of the envelope provides the structural support for nuclear morphology and functions as a platform for coordinating several cellular processes, including DNA repair, cell signaling, migration, and gene expression. The lamina is connected to the inner nuclear membrane through INM proteins (emerin and lamin B receptor), the chromatin proteins (histone H2A/H2B), and also the cytoskeleton-interacting LINC (linker of nucleoskeleton and cytoskeleton) complexes (reviewed in [5]). The physical linkages of LINC are instrumental in the plasticity of cellular organization and are required for processes such as nuclear migration and anchorage, meiotic chromosome movements, centrosome positioning, and the global organization of the cytoskeleton. 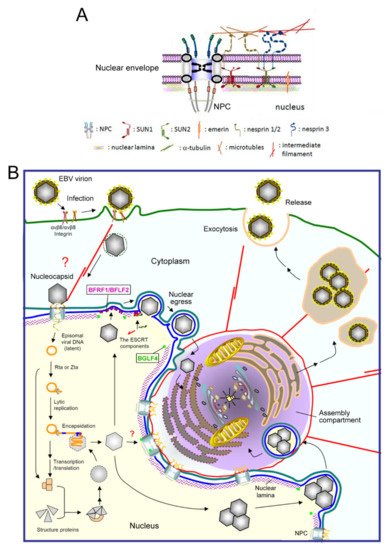 Figure 1. A diagram of EBV virion replication, production, and maturation. (A) An overview of the nuclear envelope (NE) structure with selected NE-associated proteins and nuclear pore complexes. The NE is composed of two lipid bilayers, inner and outer nuclear membranes (INM and ONM), and the nuclear lamina formed by lamin filaments. The nuclear pore complexes (NPCs) not only serve as gates for material transport, but also structurally hold the membranes and lamina together. The ONM, which is continuous with the ER, is characterized by cytoskeleton-associated nesprin proteins tethered by SUN1 and SUN2 in the INM. Emerin is an INM integrated protein that anchors on the nuclear lamina. (B) After EBV infects cells, the viral genome is injected into the nucleus through nuclear pore complexes. The linear genome is circularized into the episomal form through the terminal repeats and maintained as an episomal form in the latently infected cells. With chemical stimulations or reactivation signals, the viral transactivator Zta or Rta activates replication-related viral proteins and lytic viral DNA replication. Along with the production and assembly of viral capsid proteins, the viral genome is encapsidated into the preformed procapsid to form the mature nucleocapsid. Simultaneously, the viral BGLF4 protein kinase mediates the phosphorylation and partial disassembly of nuclear membrane-underlying nuclear lamina, allowing the access of nucleocapsids to the nuclear membrane. In our observations, the nucleocapsids then traverse through the nuclear envelope with the coordination of the viral nuclear egress complex BFRF1/BFLF2, cellular ESCRT machinery, and Nedd4-like ubiquitin ligases. The cytoplasm-distributed nucleocapsids may subsequently transport into the juxtanuclear “viral assembly compartment”. This specialized compartment, containing highly reorganized membrane structures and organelles, may provide a site for efficient tegumentation and secondary envelopment of the nucleocapsids. Finally, the mature virion is transported close to the cell margins and released from the infected cells by exocytosis. NPC, nuclear pore complex.
NE integrity is essential for cell homeostasis. Alteration of NE structure or components may impact the behavior and the phenotypes of cells in many ways. For decades, deleterious morphological changes of the NE in tumor cells have been recognized as an important parameter for the malignant criteria of tumors [5][6][7]. Many NE-associated diseases, collectively designated nuclear envelopathies or laminopathies, have been identified. Most of these disorders come from mutations in INM proteins or their interacting partners, diseases including muscular dystrophy, lipodystrophy, neuropathy, and progeria (premature aging) syndromes [8][9]. Diseases may be due to mutations or altered expression of alleles, the mechanical stability of the nucleus, or cell cycle regulation. However, the molecular mechanisms that give rise to these diseases and whether pathogen infection may modulate the nuclear structure and contribute to the pathogenesis remain poorly understood [10][11].

The gatekeeper function of the NPC is important for preventing the abnormal distribution of cytoplasmic components or genome-toxic insults to the cellular chromatin. The NPC has a molecular mass of ~125 megaDaltons (MDa) in vertebrates and is composed of multiple copies of a set of 30 diverse proteins, termed nucleoporins (NUPs) [12]. In the middle of the nuclear pore, FG-NUPs, containing Phe-Gly (FG) repeats, play the most relevant role in controlling the nuclear transport receptors (NTR) that shuttle through the NPC. FG-NUPs and NTRs interact through hydrophobic contacts for the translocation step of nuclear transport through the NPC. The canonical transport of most macromolecules (>40 kDa) into the nucleus is controlled by nuclear localization signals (NLS) that are recognized by specific members of the importin receptor family. Proteins containing a bipartite motif or a stretch of basic amino acids bind to an importin alpha and beta heterodimeric receptor complex [13]. During transport, importin α binds to the NLS-bearing protein, and importin β mediates the binding of the transport complex to the FG-NUPs, which subsequently slide through the NPC [14][15]. The small GTPase Ran regulates the association and dissociation of the importin-cargo complex between GTP- and GDP-bound forms [16][17]. For the export of nuclear protein, XPO1 (Exportin-1/Chromosome Region Maintenance 1/CRM1) is the most known mediator. Nuclear export signals (NESs) are short leucine-rich sequences that can be found in many shuttling proteins. Cargo proteins containing NES are recognized by XPO1, which interacts with nucleoporins NUP214 and NUP88 in NPC to transport out of the nucleus in a RanGAP-dependent manner [18][19].
Nuclear transport is also an important step that controls specific signaling pathways. For example, activators of transcription, including IRF3 and NF-κB, are regularly expressed and sequestered in the cytoplasm. They are translocated into the nucleus through phosphorylation-mediated regulation and activate specific innate immune response genes upon stimulation [20][21]. Such regulation could occur in as little as 30 min to activate gene transcription in response to challenge by various pathogens.

Epstein–Barr virus (EBV) is a human gamma-herpesvirus that infects most of the world’s population. It has a 170–175 kb linear double-stranded DNA genome which encodes approximately 90 open reading frames. The genome is packaged within an icosahedral capsid, approximately 100–120 nm in diameter, surrounded by a proteinaceous tegument and a lipid bilayer envelope. EBV generally establishes two phases in its life cycle, latency and lytic replication [22]. EBV latent proteins help B cell proliferation, including LMP1 (latent membrane protein 1), which can mimic CD40 signaling to activate NF-κB signaling, and EBNA2 (EBV nuclear antigen 2), which can turn on Myc expression. EBV can transform primary B cells into lymphoblastoid cell lines in vitro and may cause post-transplantation lymphoproliferative disease (PTLD). Increasing evidence indicates that lytic phase gene expression also contributes to EBV oncogenesis [23].
EBV mainly infects naïve B lymphocytes and epithelial cells through different receptors, including CR2, HLA class II, and integrins [24]. B cell entry may occur via membrane fusion or endocytosis followed by fusion of the viral membrane with the membrane of the endocytic vesicle [25]. Ephrin receptor A2 was recently identified as the EBV receptor on epithelial cells [24][26][27]. The various steps of EBV replication are illustrated in Figure 1B. After the initial infection, mediated by sequential interactions of viral glycoproteins with host surface receptors, the nucleocapsid is internalized through endocytosis or membrane fusion [28][29][30]. It has been postulated that the nucleocapsid might undergo some structural changes and slide along the microtubule or actin cytoskeleton to the NPC boundary [31]. The linear viral genome is then injected into the nucleus [32]. However, how the EBV genome gets through the NPC and whether viral factors modify the NPC structure to facilitate transport of the viral genome remain unclear. The genome is then circularized and maintained by the EBV encoded nuclear antigen EBNA1 as an episomal form in the nucleus, remaining latent in the host [24].
Upon chemical or stress stimulation, or Ig cross-linking on the surface of B cells, EBV is reactivated and genome replication ensues. Viral lytic genes are expressed in a temporal and sequential order that is divided into three stages, immediate-early (IE), early (E), and late (L). Two immediate-early transactivators, Zta and Rta, are transcribed before viral protein synthesis and can turn on complete viral lytic replication [22]. Most of the early genes are required for viral DNA replication, such as the polymerase processivity factor BMRF1 and CDK1 (cyclin-dependent kinase 1)-like protein kinase BGLF4. The late viral products are mainly structural proteins that are expressed after viral DNA synthesis, such as viral capsid protein VCA and glycoprotein gp350/220 [33]. After DNA replication, the viral genome is packaged into the preformed capsid in the nucleus. With the coordination of cellular machinery and the viral egress complex BFRF1 and BFLF2, the intranuclear nucleocapsids subsequently move towards the inner leaflet of the nuclear membrane and bud from the NE [34][35]. In our unpublished observations, the transported nucleocapsids may obtain their tegument and secondary envelope at the “cytoplasmic assembly compartment”, a specialized cell compartment containing highly reorganized membrane apparatus, cell organelles, and cytoskeletons. Finally, the mature virions containing the cis-Golgi derived membrane are transported and released from the cell through exocytosis [36] (Figure 1B).

4. The Nuclear Import of EBV Proteins

After genome replication, EBV DNA is packaged into the preassembled procapsid, which primarily consists of the major capsid protein, VCA, and is held together by 320 triplexes formed by two minor capsid proteins, BDLF1 and BORF1, and a small capsid protein, BFRF3, on the hexameric capsomers [45]. The nucleocapsid size is about 100–130 nm, too large to go through the nucleopore. The NE structure is a significant hindrance for the transport of the nucleocapsid into the cytoplasm. Our and others’ studies demonstrated that at least three virus-encoded proteins, including BGLF4 protein kinase and nuclear egress complex BFRF1/BFLF2, modify the NE structure to facilitate the nucleocytoplasmic transport of nucleocapsids.