Carrots are a multi-nutritional food source. They are an important root vegetable, rich in natural bioactive compounds, which are recognised for their nutraceutical effects and health benefits.

Fruits and vegetables are rich sources of nutrients that contain phytochemicals (also known as bioactive compounds), which are recognised for their nutraceutical effects and health benefits [1]. The cultivated carrot (Daucus carota L.) is one of the most important vegetable plants in the world because of its high yield potential and use as fresh or processed product. With an annual world production (carrots and turnips) of >428 million tons and a total growing area of about 11.5 million hectares [2], carrots rank among the top 10 vegetable crops in the world [3]. They play a major role in human nutrition, because of their high dietary value and good storage attributes [4][5]. Phytochemicals contribute to the dietary value of carrots and comprise mainly four types; namely, phenolic compounds, carotenoids, polyacetylenes, and ascorbic acid.

The edible carrot, Daucus carota, is the most important root vegetable plant grown worldwide and it is part of the Apiaceae family [6]. The carrot consists mainly of two parts, the stem and the root, and most of the root consists of the peel (periderm), a pulpy outer cortex (phloem), and an inner core (xylem). Figure 1 shows the carrot root’s anatomy. Cultivated carrots have orange, reddish, purple, black, or yellow roots. The most commonly eaten part of the carrot plant is the root, though the stems and leaves are eaten as well, so the present review is in regard to the root, unless otherwise indicated. 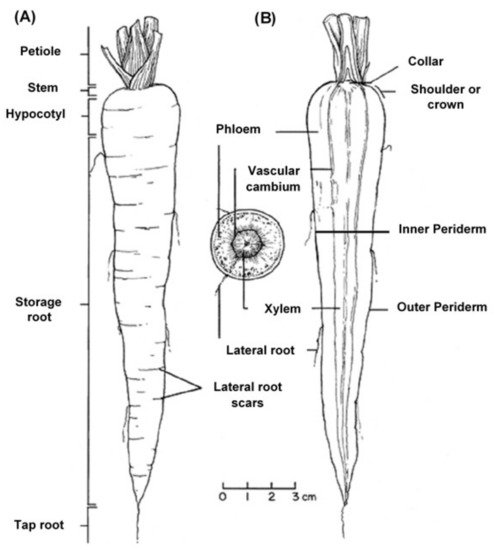 Phenolic compounds constitute one of the most ubiquitous groups of plant metabolites and are an integral part of both human and animal diets. The role of polyphenols in the prevention of degenerative diseases, like cancer, cardiovascular diseases, and neurodegenerative diseases has been reported. Interest in food phenolics has increased greatly over the past two decades, owing to their antioxidant capacity and their function as a defence against oxidative stress caused by excess reactive oxygen species [7].
Phenolic compounds are secondary plant metabolites, mainly composed of an aromatic ring bearing one or more hydroxyl groups, playing a crucial role in counteracting various type of stress (ultraviolet irradiation, aggression by pathogens, parasites, and plant predators), and contributing to the organoleptic properties of plants and plant-derived food [8][9][10][11]. Phenolic compounds can be divided into different subgroups, such as phenolic acids, flavonoids, tannins, lignans, stilbenoids, and curcuminoids. It has been reported that carrots are rich in phenolic acids, such as p-hydroxybenzoic, caffeic, and chlorogenic, as well as in anthocyanins, a class of flavonoids (Figure 2) [12]. 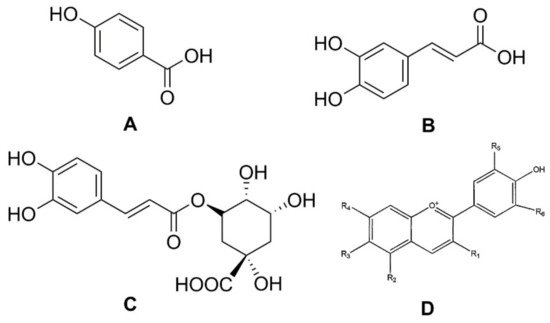 Figure 2. Structures of phenolic acids: (A) p-hydroxybenzoic acid; (B) caffeic acid; (C) chlorogenic acid; and (D) the basic chemical structure of anthocyanins.
Isocoumarins and phenolic acids are the potentially bitter compounds found in carrot peels. Czepa and Hofmann [13] reported that the bitter taste in carrots is caused by terpenoids and water-soluble phenolics. Therefore, their presences can be used as biological markers to assess the quality of fruits and vegetables during postharvest operations [14].

Carotenoids are a group of isoprenoid molecules present in all photosynthetic plants, including carrots. Some non-photosynthetic fungi and bacteria also possess carotenoids. Carotenoids are acyclic or have five or six C rings on one or both ends of the molecule [14]. Several conjugated double bonds of a polyene chain that function as a chromophore are responsible for the yellow, orange, and red colours of carotenoids [15][16]. There are two types of carotenoids present in carrot; namely, carotenes and xanthophylls. The major carotenoids (Figure 3A) in carrot roots are β-carotene (75%); α-carotene (23%); lutein (1.9%); and β-cryptoxanthin, lycopene, and zeaxanthin [17]. 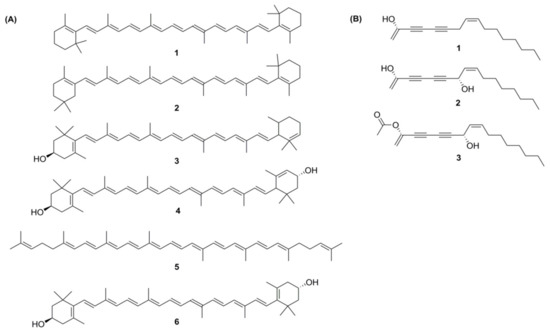 l-ascorbic acid or vitamin C (Figure 4) is one of the most abundant water-soluble low molecular weight antioxidants found throughout the kingdom Plantae. It is known to play a central role in regulating the cellular redox potential in cells [20][21]. As humans and some other primates lack the ability to synthesize and store vitamin C, they depend on fresh fruits and vegetables to cover their daily requirements (75–90 mg RDA). All recent studies point toward a diet rich in vitamin C for improving human health. Troesch et al. [22], suggest that vitamin C should be a clear target for the nutritional enhancement of horticultural crops. The accumulation of vitamin C within the same species may vary between different cultivars [21][23][24], tissue types [25], and developmental stages [24][25]. Regardless of this variability, vitamin C is tightly regulated through net biosynthesis, recycling, degradation/oxidation, and/or intercellular and intracellular transport. 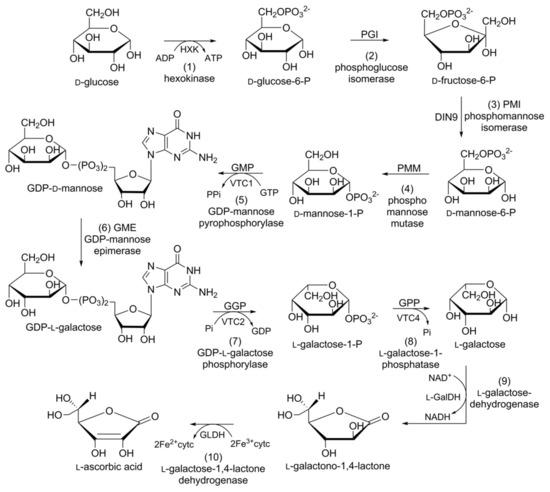