Subjects: Others
View times: 214
Submitted by:

Sclerostin, a 22-kDa glycoprotein that is mainly secreted by the osteocytes, is a soluble inhibitor of canonical Wnt signaling. This canonical Wnt signaling pathway, in addition to its function during embryogenesis, also plays a crucial role in adult tissue homeostasis by regulating the maintenance and differentiation of stem cells. In particular, this signaling cascade also exerts an important regulatory pathway in the differentiation of mesenchymal stem cells towards the osteoblast-lineage. Since sclerostin is an inhibitor of this signaling pathway, increased sclerostin concentrations will lead to an increased bone resorption and decreased bone formation. The cellular and molecular actions that are involved in this process, will be discussed in this review.

Beta-catenin is the central regulatory player in the canonical Wnt signaling. Activation of this signaling cascade, by binding of the Wnt ligands to the Frizzled (Fz) receptor and Low-density Lipoprotein Receptor-related Protein 5/6 (LRP5/6) co-receptors, leads to inhibition of the β-catenin degradation complex. In this way, β-catenin can accumulate in the cytoplasm, and subsequently be translocated into the nucleus. In the nucleus, β-catenin functions as a coactivator of the transcription factors T-cell factor (TCF) and Lymphoid Enhancer-binding factor (LEF), thereby modifying gene transcription. It has been shown that the Wnt/β-catenin signaling cascade downregulates adipogenic differentiation by inhibiting the expression of Peroxisome Proliferator-Activated Receptor gamma (PPARγ) and CCAAT/Enhancer Binding Protein alpha (C/EBPα), both important adipogenic regulators, while stimulating Runt-related transcription factor 2 (Runx2) and Osterix, well-known inducers of osteogenesis [1][2]. The canonical Wnt signaling also stimulates osteoblast maturation and viability of osteoblasts and osteocytes. These cells then increase their production of osteoprotegerin (OPG) (a decoy receptor of Receptor Activator of Nuclear Factor Kappa-Β Ligand (RANKL)), by which osteoclast formation is inhibited.

To prevent excessive bone formation, several antagonists are produced amongst which is sclerostin. Mechanical unloading [3], low levels of serum parathyroid hormone (PTH) [4][5] and estrogen deficiency [6] trigger sclerostin production. As already mentioned above, in the bone, sclerostin is mainly produced by the osteocytes, the cells that reside within the bone matrix and comprise between 90%–95% of all bone cells. After its secretion, sclerostin will be anchored to the LRP4 receptor on the osteoblast membrane, by which sclerostin is retained in the bone compartment [7]. Sclerostin can also bind to LRP5/6, leading to receptor internalization and/or reduced availability of these co-receptors to Wnt ligands, which results in inhibition of the canonical Wnt signaling. This leads to (Figure 1):

2.Inhibition of Proliferation and Differentiation of Osteoprogenitor/Pre-Osteoblastic Cells, as Well as Decreased Activation of Mature Osteoblasts

Osteoblasts are derived from mesenchymal stems cells, which are multipotent progenitor cells that are able to differentiate into a variety of cell types (including osteoblasts, chondrocytes, adipocytes, smooth muscle cells [8] and endothelial cells [9]). Depending on the specific activation of signaling pathways (such as Wnt/β-catenin signaling) and transcription factors (such as Runx2 and osterix), mesenchymal cells will commit to the osteoblastic lineage. Inhibition of the canonical Wnt signaling by sclerostin therefore directly prevents the development of new osteoblasts. However, Thouverey and Caverzasio found that sclerostin not only functions by inhibiting canonical Wnt signaling, but also activates platelet-derived growth factor receptor signaling to inhibit osteoblast differentiation [10]. Sclerostin also inhibits the activity of mature osteoblasts, since osteocalcin, procollagen type 1 N-terminal Propeptide (P1NP) and bone-specific alkaline phosphatase (BsAP), all produced by the osteoblast and therefore considered indicators of osteoblastic activity, were increased after administration of romosozumab, an antibody directed against sclerostin [11].

Mineralization of newly formed bone is a dynamic process in which Small Integrin-Binding Ligand N-linked Glycoproteins (SIBLINGS), such as Matrix Extracellular Phosphoglycoprotein (MEPE), are involved [12]. A key characteristic of MEPE, and several other SIBLING proteins, is the presence of an Acidic Serine Aspartate-Rich MEPE-associated (ASARM) motif [13]. When cleaved by cathepsin B, the ASARM motif inhibits mineralization and phosphate uptake [14]. Cleavage of this ASARM motif can be prevented by Phosphate-regulating neutral Endopeptidase (PHEX), which binds to full-length MEPE [15][16]. Regulation of mineralization is therefore determined by the PHEX/MEPE ratio. Sclerostin is involved in the regulation of this PHEX/MEPE axis, by inducing the expression of ASARM-peptides (anti-mineralization) and downregulating PHEX (pro-mineralization) [17][18].

4. Increased Apoptosis of the Osteogenic Cells

Experiments in Sost knockout (KO) mice demonstrated decreased apoptosis of osteoblasts and osteocytes, while osteoblast activity was increased in these animals compared to wild type (WT) mice [19]. These results were confirmed by Chandra et al., showing that in a mouse model of radiation damage, the inhibition of sclerostin protected against apoptosis of osteoblasts [20]. Additionally, in human osteoblastic cells, sclerostin induced apoptosis by activating caspases 1, 3, 4 and 7, as well increasing the expression of the pro-apoptotic factor Bax [21].

5. Maintenance of Bone Lining Cells in the Quiescent State

Bone lining cells are found covering the bone surface. They are considered to be derived from previously active osteoblasts that did not undergo apoptosis or differentiated into osteocytes [22]. During normal physiology, active bone lining cells play a crucial role as coordinators of bone formation and resorption [23][24]. Regulation of the activity state of the bone lining cells—either remaining in the quiescent state or being reactivated to osteoblasts—at least in part, seems to be controlled by sclerostin. One study, performed in ovariectomized rats and cynomolgus monkeys, demonstrated that anti-sclerostin antibody treatment strongly reduced quiescent bone surfaces, whilst increasing bone surfaces actively involved in mineralization [25]. Another study in which mice were administered with an anti-sclerostin antibody, showed reactivation of the bone lining cells, as indicated by the increase in size and expression of osteocalcin, a marker of osteoblastic bone formation [26]. These results demonstrate that reactivation of bone lining cells could explain the rapid increase in osteoblast numbers on previously quiescent bone surfaces [26].

Immature osteocytes, which are located in the osteoid or in close proximity of the bone surface, still share many morphological features with the osteoblast [27]. However, when the osteocytes becomes deeper embedded in the mineralized bone matrix, they change their morphology to become mature osteocytes [27]. This process of osteocyte maturation is triggered by matrix mineralization [27].

As discussed above, sclerostin is an inhibitor of matrix mineralization and therefore, could also be involved in the regulation of osteocyte maturation. This was demonstrated by Atkins et al., who found that, after treating human primary osteoblast cultures with sclerostin, cells increased their E11 expression (pre-osteocyte marker), while decreasing dentin matrix acidic phosphoprotein 1 (DMP1) and SOST expression (mature osteocyte markers) [17].

In the bone, sclerostin is produced by the mature osteocytes, where its expression is regulated by a wide variety of factors, including local cytokines [28], hormones such as PTH [5] and estrogen [29], and mechanical loading [30]. Under unloading conditions, sclerostin is produced by the osteocytes in order to regulate re-shaping of the osteocytic lacunae by ‘osteocytic osteolysis’ [31]. The proteins that are upregulated by sclerostin correspond to those produced by the osteoclasts, including carbonic anhydrase 2 [31], cathepsin K [32][31], tartrate-resistant acid phosphatase [32][31], and C-terminal collagen telopeptide [18]. This process of osteocytic osteolysis has important effects on bone physiology, not only by releasing calcium from the bone matrix, which is shown to be crucial during lactation [32], but also by affecting mechano-sensation and bone turnover (reviewed by Tsourdi et al. [33]).

Research has shown that the canonical Wnt/β-catenin signaling is a critical regulator of osteoclastogenesis [34][35][36]. During the inhibition of canonical Wnt signaling, the expression of OPG is decreased, thereby increasing the RANKL/OPG ratio, and, thus, bone resorption [37]. Wei et al. showed that, in response to RANKL, β-catenin in osteoclast precursors is downregulated, which is needed to allow the differentiation of osteoclast precursors towards mature osteoclasts [34]. Furthermore, Weivoda et al. demonstrated that osteoclast lineage cells express canonical Wnt receptors [36], indicating that sclerostin might have direct effects on osteoclast formation and maturation. 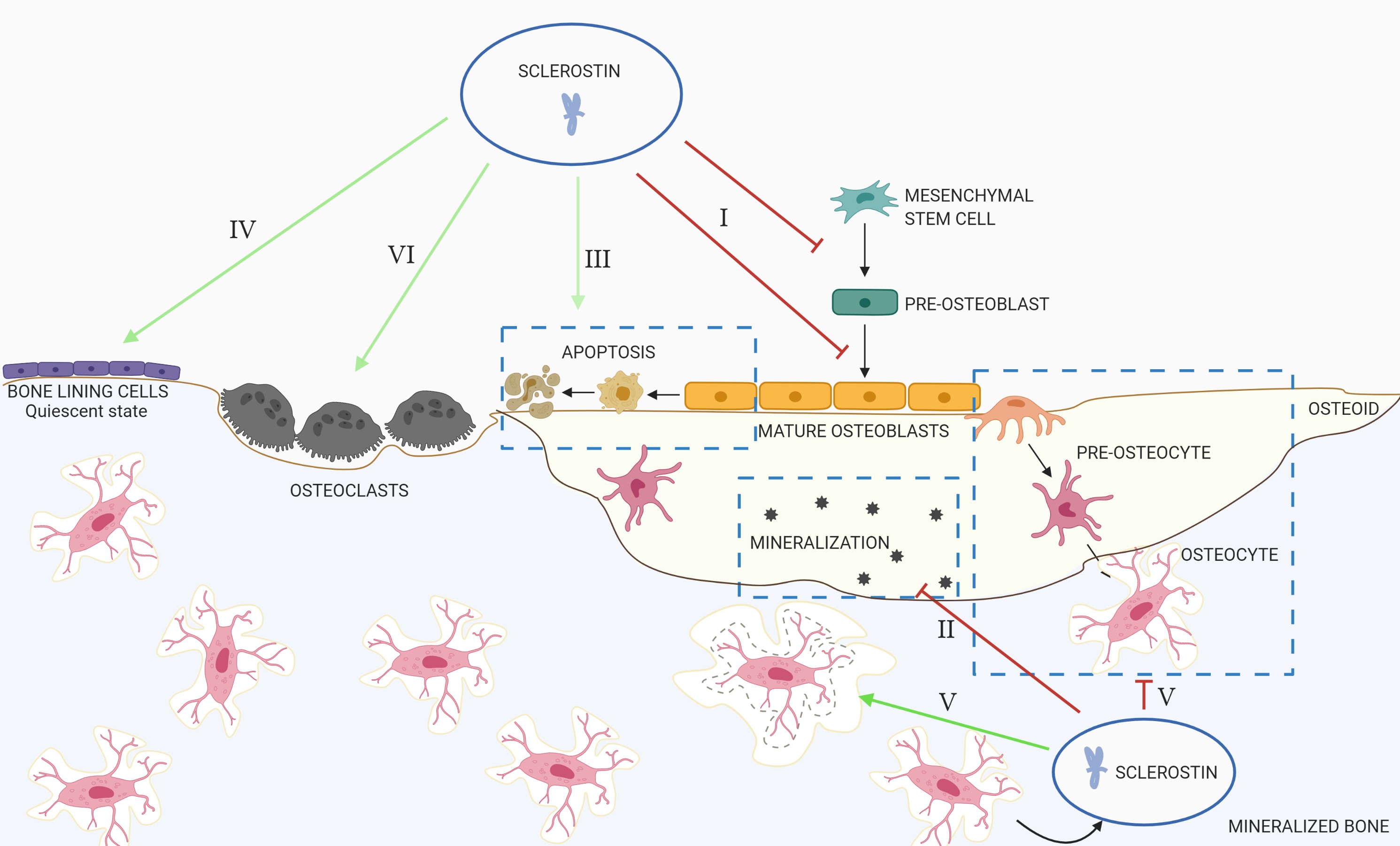 Figure 1. Overview of the actions of sclerostin in the bone. I: Inhibition of proliferation and differentiation of osteoprogenitor/pre-osteoblastic cells, as well as decreased activation of mature osteoblasts; II: decreased mineralization; III: increased apoptosis of the osteogenic cells; IV: maintenance of bone lining cells in their quiescent state; V: regulation of osteocyte maturation and osteocytic osteolysis; VI: stimulation of bone resorption.