Ribosomal S6 Kinases (RSKs) are a group of serine/threonine kinases that function downstream of the Ras/Raf/MEK/ERK signaling pathway. Four RSK isoforms are directly activated by ERK1/2 in response to extracellular stimuli including growth factors, hormones, and chemokines. RSKs phosphorylate many cytosolic and nuclear targets resulting in the regulation of diverse cellular processes such as cell proliferation, survival, and motility. In hematological malignancies such as acute myeloid leukemia (AML), RSK isoforms are highly expressed and aberrantly activated resulting in poor outcomes and resistance to chemotherapy. Therefore, understanding RSK function in leukemia could lead to promising therapeutic strategies.

The Ras-mitogen-activated protein kinase (MAPK) pathway is involved in the regulation of normal cell proliferation, survival, growth, and differentiation [1][2]. More than 30% of all human cancers are associated with abnormal control of this signaling network, resulting in gain of function and subsequent extracellular signal-regulated kinase (ERK) hyperactivation [3]. The Ras-MAPK pathway is initiated by a ligand binding to the receptor tyrosine kinase (RTK) receptor, followed by docking adaptor proteins such as growth factor receptor-bound protein 2 (GRB2) and Son of Sevenless (SOS), leading to activation of the associated Rat sarcoma (Ras) and recruitment of Raf. Raf then activates downstream mitogen-activated protein kinases kinase (MEK1/2) and ERK1/2 (Figure 1) [2]. 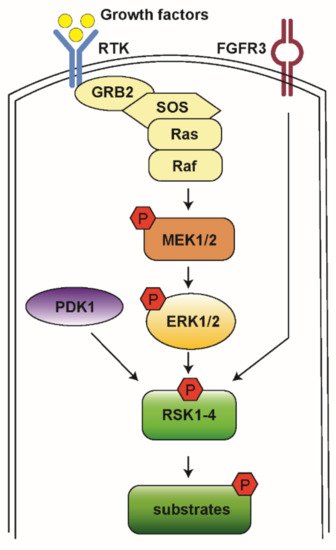 Figure 1. A schematic model for RSK activation. When RTK is stimulated by growth factor, it activates the docking proteins GRB2 and SOS. SOS triggers Ras to exchange guanosine diphosphate (GDP) to guanosine triphosphate (GTP) and then to become activated. Ras activates Raf kinases, which phosphorylate MEK1/2, ERK1/2, and RSK1-4. Then, RSKs phosphorylate various downstream substrates to mediate diverse cellular processes.
RSKs are a group of serine/threonine kinases that function in the MAPK signaling cascade and are the direct downstream effectors of ERK1/2. Four RSK isoforms are directly activated by ERK1/2 in response to extracellular stimuli including growth factors, hormones, and chemokines [4][5]. RSKs phosphorylate many cytosolic and nuclear targets resulting in the regulation of diverse cellular processes such as cell proliferation, survival, and motility. Therefore, the RSK isoforms represent attractive therapeutic targets for cancer [6][7]. Here we review the general roles of RSK isoforms and discuss their potential roles in AML and current pharmacological tools to inhibit their function.

AML is a genetically and phenotypically heterogeneous hematological malignancy characterized by the accumulation of immature myeloid blasts with peripheral blood cytopenia [8][9]. AML patients have an overall survival of less than 65% in children and 40% in adults. The current treatment options, including intensive chemotherapy and stem cell transplantation, are associated with significant morbidity and mortality [10]. Thus, it is critical to develop more effective and less toxic therapies for AML.
The Ras/Raf/MEK/ERK pathway has been reported to be constitutively activated in more than 50% of AML and acute lymphocytic leukemia (ALL) cases [11][12]. Thus, RSK isoforms play an important role in AML pathogenesis and progression. In addition, it has been observed that RSK1/2 are the predominant isoforms expressed in AML cells, whereas RSK4 has shown significantly lower expression in AML patients compared to healthy people. This suggests that downregulated RSK4 expression may lead to leukemia or negatively affect the prognosis of patients with AML [13]. We discuss below the roles of RSKs in AML pathogenesis (Figure 2) and how RSKs could be a therapeutic target for AML treatment.

Our group has previously observed that approximately 60% of AML patients express CREB at high levels, and this is associated with an increased risk of relapse and decreased event-free survival [14][15]. Similarly, the expression and phosphorylation levels of RSKs are significantly increased in pediatric AML patients associated with poor survival [16][17]. Furthermore, we have observed that RSKs phosphorylate CREB on Ser133, and then phosphorylated CREB mediates proliferation and survival of myeloid cells through induced expression of Bcl-2, cyclin A, and cyclin D [14][16]. In addition, we have recently established that RSK inhibition inhibits AML cell proliferation through the regulation of mitotic exit [17]. A potent RSK inhibitor, BI-D1870, increases metaphase arrest by preventing the metaphase/anaphase transition, followed by induced apoptosis of AML patient cells through impeded association of cell division cycle 20 (CDC20) with anaphase promoting complex/cyclosome (APC/C) and increased mitotic arrest deficient 1 (MAD2) and CDC20 binding. Moreover, BI-D1870 treatment potentiates the anti-leukemic activity of vincristine via synergistically increased mitotic arrest and apoptosis in AML cells. Therefore, our findings suggest a novel therapy that overcomes vincristine resistance to AML cells.

FLT3 is a receptor-tyrosine kinase expressed on hematopoietic progenitor cells and plays an important role in proliferation, survival, and differentiation of these cells [18][19]. The internal tandem duplication mutation in FLT3 (FLT3-ITD) is the most frequent mutation in AML found in 25–30% of cases and associated with a poor prognosis [20]. FLT3-ITD leads to constitutive activation of the Ras/Raf/MEK/ERK pathway [11][12]. As a downstream regulator of this pathway, RSKs have essential roles in the pathogenesis and myeloid lineage determination of FLT3/ITD-induced hematopoietic transformation. Activated RSK1 phosphorylates and inactivates pro-apoptotic BAD protein, preventing the apoptosis of BaF/FLT3-ITD cells [21]. Inhibition of RSK1 expression reduces BAD phosphorylation resulting in the induced apoptosis of MV4-11, a cell line harboring FLT3-ITD. Targeting RSK2 by FMK, a RSK inhibitor, attenuates cell viability and induces significant apoptosis in human primary FLT3-ITD+ leukemic cells [22]. These findings suggest that combined inhibition of FLT3 and RSKs may be a viable therapeutic strategy to cure AML patients with FLT3-ITD.
In addition, recent studies have reported that RSKs have pro-survival functions as a new target of Pim2 kinase in relapsed FLT3-ITD+ AML cells [23][24]. Pim2 is a downstream target of FLT3-ITD+ AML cells and directly contributes to FLT3 inhibitor resistance [24]. Ectopic expression of RSK2 rescues the viability of Pim2-depleted cells through the regulation of Bax expression. These support the involvement of RSK2 in AML cell survival as a downstream of Pim2 and a novel therapeutic strategy against therapy-resistant FLT3-ITD+ AML.
Furthermore, it has been reported that FLT3-ITD activates RSK1 to enhance proliferation and survival of AML cells by activating mTORC1 and eIF4 [25]. Activated RSK1/2 via FLT3-ITD and MEK/ERK pathways phosphorylate TSC2 and eIF4B in cooperation with Pim2, thus activating mTORC1/S6K/4EBP1 pathway resulting in enhanced proliferation.

It has been shown that RSK2 has a role in hematopoietic transformation of AML and multiple myeloma via an alternative mechanism of RSK activation [26][27]. FGFR3 directly phosphorylates Tyr529 on RSK2, which facilitates inactive ERK1/2 binding to RSK2, and consequently phosphorylates and activates RSK2 [26]. FGFR3 additionally phosphorylates Tyr707 on RSK2 that may disrupt the auto-inhibitory αL-helix motif on C-terminal [27]. Targeted inhibition of RSK2 effectively induced apoptosis in FGFR3-expressing myeloma cells, suggesting that RSK2 is a critical signaling effector in FGFR3-mediated hematopoietic transformation.

2.4. RSKs in the Resistance to As2O3 Treatment

Arsenic trioxide (As2O3) treatment is an effective therapy for acute promyelocytic leukemia (APL) which is a subtype of AML, but shows no significant clinical activity in other non-APL subtype refractory or relapsed AML cases [28]. Recent studies have implicated that RSK1 is involved in the resistance of AML to As2O3 [29][30]. RSK1 is phosphorylated and activated during As2O3 treatment in different AML cell lines. This suggests that RSK1 counteracts As2O3-dependent anti-leukemic response by being activated in a negative feedback regulatory manner. Combined treatment of RSK1 inhibitor with As2O3 was found to result in more potent suppression of leukemic cells. These results suggest that RSK1 is a potentially important target to enhance the anti-leukemic properties of As2O3.

2.5. RSKs with Inhibition of SHH Signaling

Sonic Hedgehog (SHH) signaling is implicated in drug resistance for a range of human cancers [31]. A recent study showed that RSK inhibition overcomes resistance to inhibition of the SHH pathway in pediatric medulloblastoma [32]. In addition, SHH signaling has been found to play a role in the self-renewal of leukemia stem cells (LSCs) for CML and multiple myeloma [33][34][35]. These findings suggest that the combination of RSK and SHH inhibitors may be a complementary anti-leukemia strategy especially through regulating LSCs.