Protamine is a natural cationic peptide mixture mostly known as a drug for the neutralization of heparin and as a compound in formulations of slow-release insulin. Protamine is also used for cellular delivery of nucleic acids due to opposite charge-driven coupling. This year marks 60 years since the first use of Protamine as a transfection enhancement agent. Since then, Protamine has been broadly used as a stabilization agent for RNA delivery. It has also been involved in several compositions for RNA-based vaccinations in clinical development. Protamine stabilization of RNA shows double functionality: it not only protects RNA from degradation within biological systems, but also enhances penetration into cells. A Protamine-based RNA delivery system is a flexible and versatile platform that can be adjusted according to therapeutic goals: fused with targeting antibodies for precise delivery, digested into a cell penetrating peptide for better transfection efficiency or not-covalently mixed with functional polymers.

Friedrich Miescher started the first known studies on nucleoproteins like Protamine in the 1870s. It was then when he first identified two principal components of salmon spermatozoa, in addition to the acidic nuclein (DNA) he found an alkaline protein for which he coined the term ‘Protamin’ [1][2].
Protamine is a naturally occurring protein containing more than two-thirds of positively charged L-arginine and is known to condense DNA during spermatogenesis. Due to the high amount of cationic L-arginine, protamine has the ability to complex nucleic acids (DNA and RNAs) and protect them from enzymatic degradation in biological systems (Figure 1A) [3]. 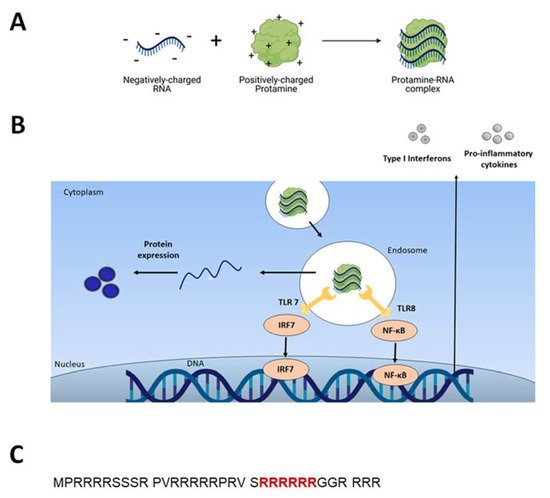 Figure 1. (A) Positively charged Protamine spontaneously assembles with negatively charged nucleic acids (here mRNA), formulating nanocomplexes; (B) The Protamine-RNA complex is internalized into the cell via endosomes. RNA acts as danger signals that trigger TLR7/8 to stimulate innate immune responses (see paragraph 3). mRNA released into the cytoplasm is translated into the desired protein (see paragraph 2); (C) Amino acid sequence of salmon sperm-derived protamine. Nuclear localization signal (NLS) highlighted in red [4].
60 years ago, Harold Amos, published the first report on the use of Protamine as an RNA carrier for uptake by eukaryotic cells [5]. He observed that the addition of Protamine sulfate to cultured chick embryo cells protected RNA from degradation. In his experiments, Protamine enhanced RNA uptake by 8 to 20 times more, in comparison with addition of naked mRNA. The same year, Christine Smull and colleagues confirmed Amos’ discovery, when they found that the addition of Protamine sulfate to cell culture can increase the infectivity of poliovirus RNA [6].

Due to its cationic nature, Protamine spontaneously associates with purified, recombinant or chemically synthesized nucleic acids and forms complexes of up to several hundred nanometers in diameter (Figure 1A), [3][7][8]. The mechanism of Protamine binding to RNA was elucidated by R. Wade Warrant in 1978 [9]. In the presence of nucleic acids, Protamine molecules change their conformation from a random coil structure to a structure containing one or more alpha-helical segments. Protamine molecules bind to RNA nonspecifically, as in the study Protamine bound to all available parts of transfer-RNA (tRNA). The stoichiometry of positive charges of protamine to negative charges of nucleic acid was established to be approximately 1:1 [9].
Several groups have refined the formulation of Protamine-RNA particles and have identified conditions that allow for the production of homogenous nanoparticles upon mixing Protamine and RNA [10]. The average size of the particles can be precisely defined according to: (i) the salt concentration in the solutions used to dilute Protamine and RNA, (ii) the ratio of Protamine to RNA and (iii) the concentration of Protamine and RNA [11]. Thus, it is possible to generate particles with an average diameter from specifically 50 nanometer (nm) up to 1000 nm, depending on the needs.

Protamine can facilitate cell transfection as arginine-rich motives appear in viral translocation sequences. Indeed, Reynolds et al. [12] in their studies with rhodamine-modified protamine, observed that Protamine has membrane-translocating activity comparable to that of the HIV TAT peptide. Both compounds, Protamine and TAT peptide, showed strong nuclear localization and similar dependence on time and concentration: the complete internalization of both peptides was complete after 1 h post addition to the cell culture. Nuclear targeting of Protamine complexes was described in detail in the work of Vighi and colleagues in their studies on solid lipid nanoparticles containing Protamine [13]. Six consecutive arginines are postulated to be the nuclear localization signal (Figure 1C) [4]. Such specific intracellular localization should not be surprising regarding the fact that Protamine’s primary biological function is replacing histones during spermatogenesis [14].

Inducing immunity via nucleic acid-based vaccines is a fast growing and promising branch of medicine. RNA is especially promising due to its natural property as a danger signal that allows it to stimulate adaptive immune responses, hence in vaccine development RNA can act as an adjuvant [15][16].

The first reports of using Protamine as an mRNA condensation and protection agent for vaccination was published in 2000 by Hoerr et al. [3]. The authors proved that mice injected with Protamine-protected mRNA coding for the model antigen of beta-galactosidase (βgalZβgαn RNA) were able to produce antigen-specific cytotoxic T lymphocytes (CTLs) and IgG antibodies against this antigen. Interestingly, the specific immune response was detectable only after injection in ear pinnae and not after intravenous injections. Only 1 μg of Protamine-condensed βgalZβgαn RNA was sufficient for in vivo CTL priming. It was then reported for the first time that RNA can be qualified as a danger signal since when stabilized (modified or mixed with Protamine) it triggers innate immunity [15]. Indeed, it was thereafter found that RNA stimulates endosomal-resident Toll-like receptors 7 and 8 (TLR 7 and 8) [8][16]. When triggered, TLRs induce specific intracellular activation pathways that can result in the expression of different types of innate immune response molecules, such as type I interferons and TNF-alpha (Figure 1B) [11]. Unmodified single-stranded RNA (ssRNA) is recognized by human TLR7 (expressed in plasmacytoid dendritic cells) and human TLR8 (expressed in monocytes). A TLR-induced cellular response consists of the activation of different signal transduction cascades and ultimately leads to induction of secretion of cytokines (e.g., IL-12, IFNα, TNFα) [15][17].
This feature suggested the possibility of using RNA as an anti-tumor treatment [8]. Glioblastoma-challenged mice were treated with series of intra-tumoral injections consisting of naked mRNA, CpG DNA, mRNA condensed with Protamine or Protamine alone. Injections of mRNA alone or Protamine-protected mRNA as well as injections of CpG DNA into tumors led to a significant delay in tumor growth and in the long term, circa 20% of mice remained tumor-free in all nucleic acid-injected groups. The tumor-free mice were subsequently re-challenged with glioblastoma cells. None of the mice that had recovered from the primary tumor graft as a consequence of nucleic acid treatment showed any palpable tumors, which indicated that immunotherapy of solid tumors using RNA as a danger signal led to long-term anti-tumor immunity. It was postulated that Protamine-stabilized RNA could represent a safer alternative replacement of CpG DNA-based adjuvants to be applied in the context of many immunotherapeutic or prophylactic treatments.
Fotin-Mleczek and colleagues explored another aspect of immunostimulatory RNA formulations for cancer immunotherapy [18]. Since mRNA complexation with Protamine can inhibit translation of mRNA, the authors investigated a new formulation consisting of two components: mRNA complexed with Protamine for providing good innate immune stimulation, and free mRNA for antigen expression. This was named RNActive vaccine (Figure 3, RNActive formulation) [19]. Animal studies showed a delay in tumor growth (melanoma cell line B16 expressing ovalbumin) of about 10 days in groups vaccinated with a two-component formulation containing OVA-coding mRNA. The authors observed significant superiority of the two-component vaccine compared with a single component (naked mRNA). This two-component vaccine induced complete adaptive immune responses, including activation of antigen-specific B and T cells. The study was repeated with mRNA coding a weaker antigen, PSMA (Prostate carcinoma-associated antigen) and gave lower, but detectable levels of innate and adaptive immune responses. The two-component RNActive formulation was also effective as a therapeutic vaccine: mice receiving the two-component OVA vaccine after tumor transplantation displayed inhibited tumor growth rates in comparison with non-vaccinated mice.

2.2. Clinical Trials with Protamine as an mRNA Carrier