In a protonic ceramic fuel cell (PCFC), the cathode is a porous oxide material where electrochemical reduction takes place involving the reduction of oxygen and combination with protons from the electrolyte to form water. The cathode is generally recognised as critical for the performance of solid oxide fuel cells, and even more so for the proton-conducting class of ceramic devices. PCFCs are promising electrochemical devices for the efficient and clean conversion of hydrogen and low hydrocarbons into electrical energy. Their intermediate operation temperature (500–800 °C) proffers advantages in terms of greater component compatibility, unnecessity of expensive noble metals for the electrocatalyst, and no dilution of the fuel electrode due to water formation. Nevertheless, the lower operating temperature, in comparison to classic solid oxide fuel cells, places significant demands on the cathode as the reaction kinetics are slower than those related to fuel oxidation in the anode or ion migration in the electrolyte. Cathode design and composition are therefore of crucial importance for the cell performance at low temperature. The different approaches that have been adopted for cathode materials research can be broadly classified into the categories of protonic–electronic conductors, oxide-ionic–electronic conductors, triple-conducting oxides, and composite electrodes composed of oxides from two of the other categories.

The dependence of contemporary society on the combustion of fossil fuels for its energy requirements has created the urgent and overriding challenge of arresting the climate change that they promote by transitioning to a carbon-neutral, sustainable energy economy. Hydrogen is likely to play an expanding role as an energy vector in a sustainable and clean future economy, in which its chemical energy is converted to electrical energy in fuel cells [[1]]. Solid oxide fuel cells (SOFCs; commonly used abbreviations are listed in Table 1) based on oxide-ion conducting electrolytes have been intensely developed due to their high combined heat and power efficiency, long-term stability, low emissions, and relatively low cost [2][3]. The high operating temperature (typically in the range 800–1000 °C) provides the advantage of fuel flexibility, and their operation with simple hydrocarbons is often touted as a gateway to their widespread employment with hydrogen as fuel. Nevertheless, the high operating temperature is associated with long start-up times and problems with mechanical and chemical compatibility.

Consequently, there has been much research effort dedicated to lowering the operation temperature of SOFCs to better address small-scale applications (micro SOFCs and auxiliary power units) and reduce the costs associated with fabrication and operation [4]. In particular, a running temperature of 600 °C would allow the use of stainless-steel balance-of-plant components and cheaper interconnect materials. Moreover, the thermochemical efficiency of combustion of natural gas is maximum at this temperature [5].

Ceramic fuel cells with a proton-conducting electrolyte (protonic ceramic fuel cells, PCFCs, or proton-conducting solid oxide fuel cells, H+-SOFCs) have been of ever-growing interest since the pioneering work of Iwahara starting in the 1980s on proton-conducting ceramic materials [4][5][6][7]. Such cells may also be operated in reverse to affect the electrolysis of water (protonic ceramic electrolysis cells, PCECs) [8][9]. These electrochemical cells may operate within an intermediate temperature (400–800 °C), which is partly due to the higher mobility and lower activation energy of protons in comparison to oxide ions in this range. PCFCs have additional advantages: the water in the electrochemical reaction is generated in the cathode, so no further fuel recycling is required, and Ni in the fuel electrode remains at a suitably low oxygen partial pressure [10]. However, lowering the operating temperature creates much larger overpotentials at the electrode–electrolyte interface [11]. Specifically, the reaction kinetics related to oxygen reduction occurring in the air electrode are slower than fuel oxidation in the anode or ion migration in the electrolyte [12]. Hence, the cathode plays a major role in determining the efficiency of fuel-cell operation in the intermediate-temperature range. Electrochemical modelling has shown that, whereas lower ohmic resistance offered by thinner electrolytes is the easiest way to improve the performance of PCFCs, the performance is otherwise restricted by the attempted current density at the cathode, meaning that the cathode limits the performance of the whole cell [12].

A number of studies of protonic ceramic single cells, particularly earlier studies, employed a single metallic phase as an air electrode, most commonly platinum [10][13][14]. The elementary reaction steps occurring in a Pt cathode in contact with a protonic ceramic membrane in fuel-cell mode for the overall oxidation reaction have been described by Uchida et al. [15] as follows:

Analogous to the oxide-ionic conducting SOFCs, the cathodic, multistep reaction encompassed in Equations (2)–(7) may be considered as the “electrode surface path” [16]. It includes the diffusion of oxygen from the gas phase to adsorption (ad) on the electrode surface (2), oxygen dissociation at the surface (3), and diffusion to the triple phase boundary (TPB) (4), where protonic species from the electrolyte combine with the dissociated and reduced oxygen (5) to produce water (6), which is finally evaporated to the gas phase (7).

The issue of cathode design, replacing platinum with oxides, has been addressed with different approaches. Then, the oxidation reaction is necessarily more complex than the scheme above. These strategies include:

(i) Improving the electronic conductivity in proton-conducting oxides via substitution of mixed-valence cations (Figure 1a). 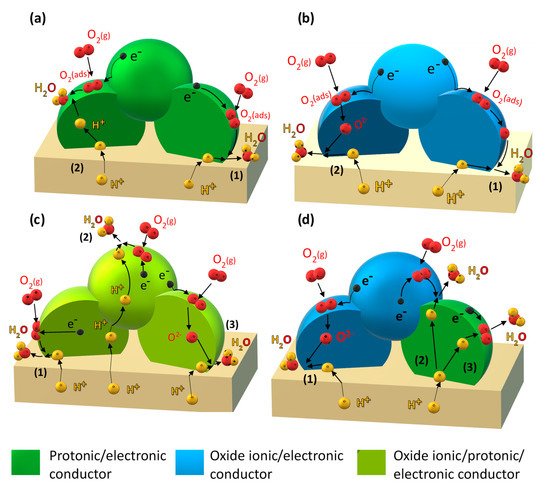 There is inevitably a certain degree of overlap among these categories. Depending on conditions of temperature and atmosphere, many proton-conducting oxides also exhibit electron-hole or oxide-ion conductivity. Hence, materials categorized as mixed protonic–electronic conductors may, under certain conditions, be triple oxide-ion proton electron-hole conductors, which is a subject of much current interest in the design of cathodes for PCFCs. Similarly, materials designated as triple conductors are not expected to exhibit transport by all three species over a wide range of conditions. It should be noted that the contributions of the different charge carriers in a given material are generally not well established, requiring detailed study. Moreover, modelling of the performance of PCFCs is considerably more complex than is the case for SOFCs due to the mixed-conducting nature (i.e., oxide ions, protons, and electron holes) of the electrolyte. Previous studies indicate that the electrolyte membrane contributes the major polarisation loss and that thinner electrolytes with better ionic conductivity should be used [17]. The concentration of polarisation associated with steam transport may be lowered by reducing the cathode thickness and enlarging the pore space, although the cathode should be thicker than the effective charge-transfer region (20–50 μm).

The importance of the cathode in the development of PCFCs has only been given more prominence in the past few years. Nevertheless, considerable progress has been achieved in this time. Developments and an overview of the current state-of-the-art in the field of cathodes for protonic ceramic fuel cells can be found in the review "Perspectives on Cathodes for Protonic Ceramic Fuel Cells", Applied Sciences 2021, 11, 5363.