Lung cancer has remained one of the major causes of death worldwide. Thus, a more effective treatment approach is essential such as the inhibition of specific cancer-promoting molecules. Aurora kinases regulate the process of mitosis - a process of cell division that is necessary for normal cell proliferation. However, dysfunction of these kinases can contribute to cancer formation. The aberrant expression of Aurora kinases in lung cancer points to their crucial role in lung carcinogenesis. Therefore, understanding the fundamental functions as well as the cellular localization of Aurora kinases may contribute to evaluate their precise oncogenic function that will may lead to better specific targeting of these cancer-related molecules.

Lung cancer remains the most commonly occurring cancer attributed to the leading cause of cancer-related deaths globally. Non-small cell lung cancer (NSCLC) comprises 85% to 90% of lung cancers while small cell lung cancer (SCLC) represents 10–15% [1][2][3]. Survival varies according to the clinical stage ranging from 92% for earliest stage to 0% for advanced stage, respectively [4]. While surgery is the treatment of choice for early stages NSCLC, chemo-radiotherapy has been the therapy of choice for the advanced stages for many years [5]. Nowadays, in advanced non-small cell lung cancer, molecular targeted therapy is the standard first-line treatment for patients with identified driver mutations; on the other hand, chemotherapy (platinum-based) is the standard treatment for patients without driver mutation or those with unknown mutation status [6][7][8][9]. Moreover, immunotherapy has been now established as one of the most promising therapeutic options [10]. At this time, chemo- and radiotherapies are no longer the best option for this disease [11] so that further investigation of the molecular processes surrounding the oncogenesis of this malignancy warrants the development of more effective pharmacological agents.

The Aurora kinases consisting of three members termed Aurora-A (AURKA), -B (AURKB), and –C (AURKC) are complementary enzymes that modulate multiple mitotic events. These mitotic kinases are expressed in a cell cycle-dependent manner, most of which are activated in the G2/M phase being involved in mitotic chromosomal segregation [13][14]. These kinases bind to protein partners to be locally functional, that are tightly regulated in a temporal and spatial manner. AURKA and AURKB are the only ones of the Aurora kinase family to be expressed at detectable levels in somatic cells during mitotic processes and their function in cellular processes in the development of tumorigenic phenotypes has been extensively studied [15].

In NCSLC, overexpression of AURKA and AURKB has been associated with poor prognosis due to reduced overall survival [16][17][18][19][20][21][22][23][24] and both kinases have been found to either potentiate or repress chemo- and/or radiotherapy in lung cancer [1][25][26][27]. Some antimitotics that control microtubule dynamics such as vinca alkaloids, taxanes, and antineoplastic drugs targeting the regulatory mechanisms of mitosis [28] have shown effectivity in reducing the pro-oncogenic properties of Aurora kinases （Figure 1）. 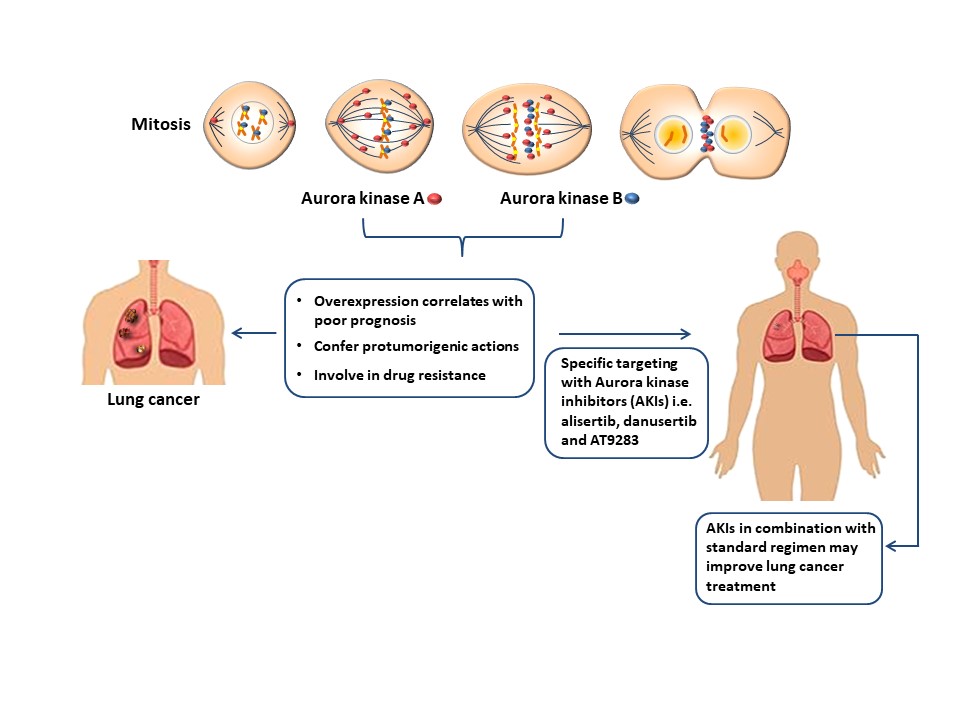 Figure 1. The overexpression of AURKA and AURKB correlates with poor therapeutic outcomes indicating their pro-oncogenic role in lung cancer, thus, strengthening the idea of specific elimination these molecules. The use of specific Aurora kinase inhibitors in combination with standard therapy may improve the current treatment strategies in this malignancy.

Aurora kinases have different subcellular distribution during the process of mitosis (Figure 2). AURKA and AURKB are constitutively present in mitotically active cells and are upregulated in highly proliferative tissues whereas the presence of AURKC is restricted to germ cells of both genders during meiosis [29]. The mitotic roles of the three Aurora kinases are thought to be dependent on their expression, temporal restriction, and localization, rather than on their kinase activity. Beside their localization, their functional differences are principally determined through binding with molecular partners and/or substrates [30]. 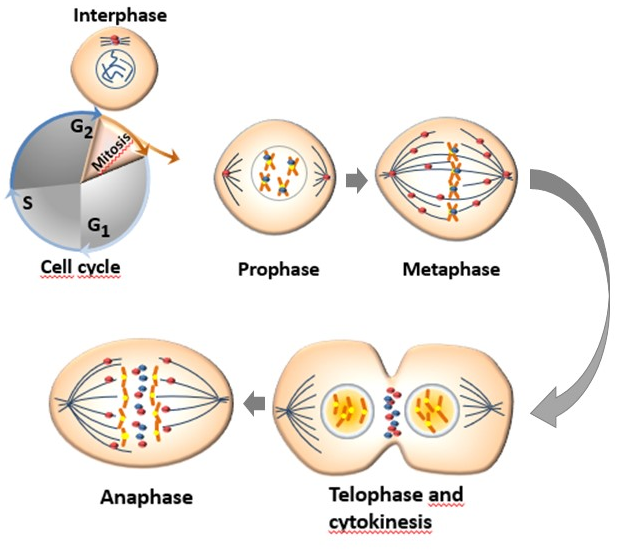 ) are expressed and activated from the G2 through the M phase being involved in mitotic chromosomal segregation [13][14]. AURKA is mainly localized in the centrosomes in interphase and mitotic cells, and is important for centrosome maturation and separation, which in turn are necessary for mitotic entry and bipolar spindle formation. AURKB is generally located at the kinetochore of mitotic cells and to the midbody of cytokinetic cells, which regulate kinetochore-microtubule attachments that are critical for chromosome alignment and segregation as well as to regulate cytokinesis [31][32]. AURKB and AURKC are thought to have the same distribution pattern in mitotic cells [33], hence, AURKC is not included in the diagram.

The human AURKA is encoded by the AURKA gene located on chromosome 20q13.2 and is the most studied of Aurora kinase family. The kinase activity of AURKA and the levels of proteins linked to this kinase increase from G2 phase through the mitosis phase, reaching an activity peak during pro-metaphase. Its activation in the late G2 phase is required to trigger the initial activation of cyclin B1-CDK 1 at the centrosome and provide entry into mitosis [34]. Thr288 phosphorylation determines the activation of the kinase activity of AURKA while its deactivation is determined by the dephosphorylation of Thr288 by protein phosphatase 1 (PP1). The activity of AURKA is determined by a protein associated with microtubules targeting protein for xenopus kinesin-like protein (TPX2), which triggers its autophosphorylation and protects it from the inhibitory property of PP1 [12][35]. The organization of the anaphase spindle at the end of mitosis is determined by the presence of AURKA, whose abundance is downregulated by the proteolysis process mediated by the APC/C-Cdh1-dependent proteasome [13].

Aurora-B is a protein encoded by the AURKB gene found on chromosome 17p13.1 [36]. AURKB guarantees a correct kinetochore–microtubule attachment thanks to the collaboration of other substrates such as survivin, borealin, and the internal centromere protein (INCEP). In fact, AURKB phosphorylates INCEP directly, increasing its kinase activity in vitro [37] In mitotic cells, AURKB is localized to the kinetochore of prometaphase chromosome, contributing to their proper alignment at metaphase, and to the spindle midzone of anaphase cells and execute important actions for the completion of cytokinesis reviewed in [38]. Aurora-B can cause defects in chromosome separation and cytokinesis, implying its pivotal role in cell division [31]. At the end of mitosis, both AURKA and AURKB are subjected to ubiquitination and proteasome degradation after dephosphorylation by PP2A or PP1 [39].

The Aurora-C is encoded by the AURKC gene localized at chromosome 19q13.43 (Gene ID: 6795). AURKB and AURKC are thought to have similar distribution pattern sequences, substrates such as INCENP [40], surviving, and borealin, and functions during cell division [33]. The only detectable difference is the localization of AURKC in interphase germ cells that involves the centrosomes rather than the nuclei [41].