One of the major differences between plants and animals is that plants contain chloroplasts, which carry out photosynthesis, produce various metabolites, and sense external cues. Chloroplasts are believed to derive from cyanobacterium in an endosymbiotic event. During evolution, most bacteria genes were transferred to the host nucleus and only a small portion of genes were retained on the own genome [1][2]. Therefore, the crosstalk between chloroplasts and the nucleus is essential to maintain cellular homeostasis, which is achieved through anterograde (nucleus-to-chloroplasts) and retrograde (chloroplasts-to-nucleus) signaling [3][4].
As a semi-autonomous organelle, the gene expression in chloroplasts is controlled by both chloroplasts and the nucleus [2]. For example, both plastid-encoded RNA polymerase (PEP) and the nuclear-encoded RNA polymerase (NEP) contribute to chloroplast gene expression [5][6]. While the expression of photosynthetic genes, such as psbA, psbB, and rbcL, is preferentially dependent on PEP, the expression of the housekeeping genes, including ribosomal RNAs and the core subunits of the PEP, is dependent on NEP [7][8][9]. NEP is a phage-type RNA polymerase with a single subunit, encoded by two nuclear genes, rpoTp and rpoTmp, in Arabidopsis. PEP is a bacteria-type RNA polymerase that consists of four core subunits (α, β, β′, and β″), encoded by rpoA, rpoB, rpoC1, and rpoC2 in the chloroplast genome, and a promoter-recognizing sigma factor (σ) encoded by the nuclear genes [10][11]. Furthermore, PEP forms a big complex with many PEP-associated proteins (PAPs) to regulate gene expression. All PAPs are encoded by the nuclear genome [12][13][14].
In addition to PAPs, many other nucleus-encoded proteins have been reported to regulate chloroplast gene expression at the transcriptional level or the post-transcriptional level (including RNA splicing, RNA editing, and translation) [13][15][16]. Although much progress has been made towards understanding their functions in post-transcriptional regulation, how they regulate chloroplast gene expression at the transcriptional level is less well-understood.
In plants, the NAC (NAM, ATAF, and CUC) family is one of the largest plant-specific transcription factors and plays important roles in plant development and stress responses [17][18]. Previous studies have revealed that the transcription factor NAC102 is involved in oxidative stress responses and the nac102 mutant is sensitive to excessive light [19][20][21].

All Arabidopsis thaliana used in this study were in the Columbia (Col-0) background. The nac102 mutant (SALK_030702) was obtained from ABRC. The transgenic lines were generated by the floral dip method [22]. Arabidopsis was grown on half-strength (1/2) Murashige and Skoog (MS) medium or in soil under long-day conditions (16 h of light and 8 h of dark) at 22 ± 2 °C.

4. NAC102 Localizes in Both Chloroplasts and Nucleus

In Arabidopsis thaliana, there are 105 NAC transcription factors [24], among which NAC102 (AT5G63790) is predicted to localize in both chloroplast and nucleus according to TAIR (https://www.arabidopsis.org; 1 June 2016). To our knowledge, no transcription factors have been reported to localize in the chloroplast. Therefore, we decided to study NAC102 further. NAC102 has two alternative transcripts, AT5G63790.1 and AT5G63790.2. To confirm the subcellular localization of NAC102, both NAC102 variants were fused with enhanced yellow fluorescent protein (eYFP) and were transiently expressed in Arabidopsis protoplasts. The CFP-tagged E2Fa transcription factor (E2Fa-CFP) was used as the nucleus marker and the chlorophyll fluorescence was used as the chloroplast marker. As shown in Figure 2, both AT5G63790.1-eYFP and AT5G63790.2-eYFP localized in chloroplast and nucleus. In the following study, we only used AT5G63790.1. To further confirm its localization, we generated the transgenic Arabidopsis expressing NAC102-eYFP (AT5G63790.1) driven by the 35S promoter (35S:NAC102-eYFP). Consistently, the eYFP fluorescence was detected in both chloroplast and nucleus (Figure 2C). 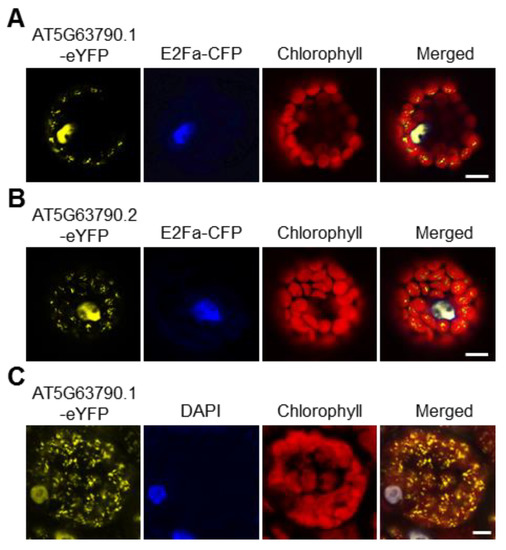 Figure 2. NAC102 localizes in both the nucleus and the chloroplast. (A,B) The localization of NAC102-eYFP when it was transiently expressed in Arabidopsis protoplasts. E2Fa-CFP was used as the nucleus marker and the chlorophyll fluorescence was used as the chloroplast marker. Both isoforms of NAC102, AT5G63790.1 (A) and AT5G63790.2 (B), were shown. (C) The localization of NAC102-eYFP in epidermal cells derived from NAC102 (AT5G63790.1) transgenic lines. The nucleus was stained with DAPI. The pictures were captured using confocal microscopy. Bars = 10 µm.

5. The N-Terminal Sequence of NAC102 Is Necessary and Sufficient for Its Chloroplast Localization 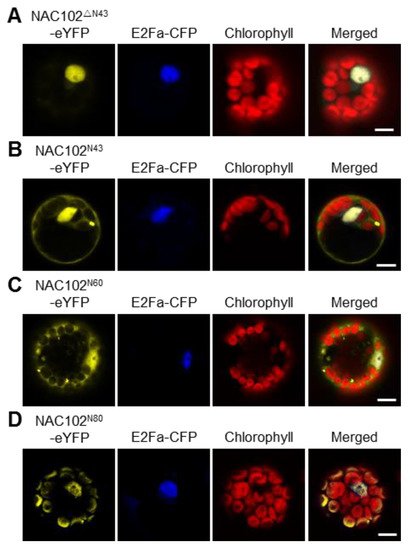 Figure 3. The effects of the N-terminal sequence of NAC102 on its chloroplast localization. The fusion proteins were transiently expressed in Arabidopsis protoplasts. NAC102ΔN43-eYFP (A) represented the truncated NAC102-eYFP without N-terminal 43 amino acid residues (N43); NAC102N43-eYFP (B), NAC102N60-eYFP (C), and NAC102N80-eYFP (D) represented eYFP fused with N-terminal 43, 60 or 80 amino acid residues, respectively. E2Fa-CFP was used as the nucleus marker and the chlorophyll fluorescence was used as the chloroplast marker. The pictures were captured using confocal microscopy. Bars = 10 µm.