The rapid growth of nanotechnology and the development of novel nanomaterials with unique physicochemical characteristics provides potential for the utility of nanomaterials in theranostics, including neuroimaging, for identifying neurodegenerative changes or central nervous system malignancy.

The rapid growth of nanotechnology and the development of novel nanomaterials with unique physicochemical characteristics provides potential for the utility of nanomaterials in theranostics, including neuroimaging, for identifying neurodegenerative changes or central nervous system malignancy. Theranostic agents play an important and emerging role in the diagnostics and treatment of metastatic tumors, allowing for refinement and reduction of treatment intervention of the cancer patient, and the combination of theranostic agents with nanoparticles has been an area of active research in the past few years. The small size and large surface area of nanomaterials permits translocation across biological barriers and enhances the interaction with cellular and intracellular components of tumor cells and the tumor microenvironment. In any other context, such extravasation would be considered undesirable, especially when not targeted, but in the context of cancer theranostics this is a tremendously useful property. The current lack of literature investigating the modifications necessary to properly target these nanoparticles, especially to the neuro-oncology space, as well as the lack of literature on nanoparticles’ imaging visibility and interactions and the off-target toxic potential of such nanomaterials limits their effective clinical translation. For the CNS oncology scope, the brain poses several challenges for treatment, including the limitations on toxicity that could lead to neurodegeneration of native cells, thereby impacting patient mortality and morbidity greatly.
Theranostic agents for the CNS follow the same criteria to achieve clinically relevant levels in the brain or in a primary/metastatic tumor site. Figure 1 illustrates the general scope of nanoparticles that have been developed, each focused on specific characteristics that optimally allow for specific drug delivery. The use of nanoparticles allows for both the targeting of nanoparticles for use in imaging of tumor location and size, as well as delivery of a therapeutic agent, which could be a small chemotherapeutic agent or a radioactive isotope (Figure 1B,C). The traditional formulation system for nanoparticles in theranostic delivery is the packaging of a compound into a nanoparticle, alone or in conjunction with a targeting ligand, e.g., gadolinium and an antibody for targeting to a specific receptor (Figure 1D). 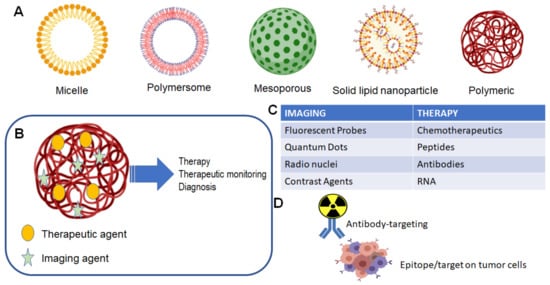 2. Use of Nanoparticles as a Diagnostic Imaging Tool

This section describes the results of our literature search for studies regarding the use of nanoparticles as contrast agents with which a variety of medical imaging modalities can view a variety of tumor types. This should be prefaced with the understanding that nearly all of these studies were conducted to view tumors xenografted into a murine (mouse) model. Additionally, the vast majority of our results were descriptions of successful use, rather than head-to-head comparisons of nanoparticles. Those that did list comparative data were those looking at the effect of an addition to or modification of a base nanoparticle (i.e., A vs. A + B). Thus, it was not reasonable to draw conclusions about the utility of one nanoparticle vs. another.

Computed tomography (CT) as an imaging modality did not yield as many results in our search as those for MRI, perhaps because of the sharp image quality MRI provides, particularly for soft tissues (i.e., tumors). Nonetheless, a number of studies were found using a variety of miscellaneous nanoparticles as contrast agents under CT imaging of tumors. Some of these were used specifically for CT imaging, but many were constructed for multimodal imaging or theranostic use. Several of the lanthanide elements have been incorporated into two examples of nanoparticles used for CT imaging. The same scintillating nanoparticle composed of Ce, Gd, and Tb ions found useful for MRI also provided contrast for CT imaging of lung carcinoma (A549 cell line) [39]. Similarly, the aforementioned Gd containing upconversion nanoparticle NaYF4/NaGdF4 used for MRI also provided CT contrast for cervical cancer (HeLa cell line) [40]. Titanium compounds have been rendered useful for CT contrast as well. Growing gold on the surface of titanium carbide allowed CT imaging of 4T1 breast carcinoma [55], and doping titanium dioxide with tungsten allowed CT imaging of the same [56]. The MnWOx nanoparticle that had MRI capability also saw utility as a CT contrast agent from the presence of tungsten [49]. Iron oxide was useful in two multimodal imaging studies that included CT imaging. One combined iron oxide with bovine lactoferrin, alginate-enclosed chitosan-encapsulated calcium phosphate, and Vivotag 680 for theranostic study of colon cancer (Caco-2 cell line) [31]. The other included an NIR-fluorophore and silver sulfide that served to enhance the CT contrast effect of iron oxide in breast carcinoma [27]. Tantalum oxide doped with iron, presumably with combined effect, provided CT contrast ability to the multimodal nanoparticle also consisting of copper sulfide and zinc phthalocyanine for theranostic study of cervical carcinoma (U13 cell line) [28]. Rhenium sulfide was used as a lone agent to view 4T1 breast carcinoma [57]. A bismuth–carbon nanoparticle composite was constructed as a naïve compound for imaging cervical carcinoma (HeLa cell line) [58]. Nanoscale coordination polymers of hafnium and bis-alkene as CT contrast agents were compounded with doxorubicin and chlorin e6 for theranostic study of breast carcinoma [59]. Finally, our search yielded a study using ExiTron nano, an alkaline earth-based nanoparticulate contrast agent manufactured by Viscover, to view liver metastases of an unspecified tumor of origin [60]. In terms of brain-tumor-specific imaging, gold nanoparticles have been successfully used as CT contrast agents in a U87 malignant glioma model [53].

SWCNT are popular contrast agents for photoacoustic (PA) imaging as well, again secondary to their responsiveness to light in the NIR region [64][86]. Although some studies attached agents to SWCNT in order to enhance PA imaging, SWCNT were the sole mode of contrast in a study imaging squamous cell carcinoma [64]. One study took the approach of attaching PA contrast dyes to SWCNT, creating five separate “flavors” of nanoparticles, those including QSY21 and indocyanine green exhibiting over 100-fold higher PA contrast than SWCNT alone [87]. Another study shared the mechanism of indocyanine green attachment for the imaging of 4T1 breast carcinoma, notably showing 2-fold greater enhancement with the SWCNT–indocyanine green combination than indocyanine green alone [88]. Other carbon-based nanoparticles useful for PA imaging include graphene oxide nanosheets, which served as PA contrast in two multimodal studies imaging 4T1 breast carcinoma [19][89], and hollow mesoporous carbon nanospheres, which did the same for two other theranostic xenograft studies [90][91]. Aside from carbon-based nanoparticles, our search yielded a mix of other agents that have been studied as PA contrast. Titanium dioxide has been modified several times to shift its absorption into the NIR range and to thus become useful for PA imaging. One example is from a previously mentioned study that utilized doping of titanium dioxide with tungsten in order to visualize 4T1 breast carcinoma [56]. Making titanium dioxide an oxygen-deficient molecule (TiO2-x) also increased absorption in the NIR range, allowing PA imaging [92]. The same study that doped titanium dioxide with Nb5+ ions for NIR fluorescent imaging found this to be useful for creating a PA contrast agent as well [80]. Gold nanorods display good absorption in the NIR range and thus have been used as PA contrast to image cervical carcinoma (HeLa cell line) [93]. Seeding of gold actually allowed functionalization of a titanium carbide nanosheet carrier for the imaging of 4T1 breast carcinoma [55]. The previously mentioned multimodal imaging study with calcium carbonate also reported good PA imaging of 4T1 breast carcinoma due to calcium carbonate having a polydopamine coat that expanded its utility [42]. MoS2–iron oxide, a nanocomposite that showed utility as an MRI contrast agent, was also found to be useful for PA imaging of breast carcinoma [34]. In a theranostic study of cervical carcinoma (U14 cell line), a bismuth sulfide–manganese oxide nanocomposite served as the contrast agent [94]. The MRI contrast vanadium disulfide nanodots discussed earlier also show strong NIR absorbance and provide PA contrast of 4T1 breast carcinoma as well [52]. Finally, an interesting coordination polymer nanodot composed of ruthenium ions and phenanthroline, neither of which show significant optical absorbance alone, showed strong NIR absorbance as a compound allowing PA imaging of 4T1 breast carcinoma [95].
For brain tumor imaging, holotransferrin nanoparticles have served as PA contrast agents to view glioma models [53], and gold nanoparticles have been useful for viewing a variety of brain tumors [54]. Several studies have also utilized SWCNT for PA imaging of glioma/glioblastoma models [86][96][97]. Because of their close mechanistic relationship, PA and fluorescent imaging share the limitation imposed by the physical barrier of the skull.

Due to the nature of the imaging mechanism, studies that included PET imaging of tumors attached a radiolabel to the nanoparticle under investigation. All but one chose the radioisotope [64] Cu. The study that differed used both 1,4,7,10-tetraazacyclododecane-1,4,7,10-tetraacetic acid (DOTA) and desferrioxamine B (DFO) as radiolabels attached to SWCNT for imaging colon adenocarcinoma (LS174T cell line) [98]. All of the following nanoparticles were transfected with [64] Cu for PET imaging: graphene oxide nanosheets in two studies viewing breast carcinoma [89][99], zinc oxide to image breast carcinoma [100], boron nitride nanoparticles in a therapeutic study of breast carcinoma [101], and molybdenum disulfide–iron oxide nanocomposite as previously mentioned to view breast carcinoma [34]. Iron oxide radiolabeled with [64] Cu has been shown to provide contrast on PET for imaging various brain tumors [54], while SWCNT have been used to view a glioblastoma model [96].

As with PET imaging, the use of the SPECT modality necessitates the addition of a radioisotope to the nanoparticle under study. Technetium-99 was the isotope of choice in most studies including the use of iron oxide [30], vanadium disulfide [52], and gallic acid–ferric nanocomplexes [102] to view breast carcinoma. Ref. [103] Iodine was the radioisotope attached in a multimodal imaging study using SWCNT to view breast carcinoma [4].

The remaining studies our search yielded cover a range of imaging modalities that were not as popular in the literature as those already mentioned. Only one study utilized X-ray imaging and did so by using gold as an X-ray absorber attached to graphene oxide for imaging breast carcinoma [18]. Two studies looked at ultrasound imaging, one of which used MWCNT as a contrast agent to visualize prostate carcinoma (CP-3 cell line) [104]. The other utilized pulsed magneto-motive ultrasound with zinc-doped iron oxide to provide magnetization and contrast for an epidermoid carcinoma (A431 cell line) [105]. A multimodal study utilized MWCNT as a contrast agent for MRI as well as microwave-induced thermoacoustic imaging of breast carcinoma [15]. Ref. [103] Iodine was attached to reduced graphene oxide nanoparticles for gamma imaging and IR thermal imaging of breast carcinoma [106]. Other nanoparticles used for IR thermal imaging include SWCNT [4] and iron oxide-polypyrrole [35], which both allowed visualization of breast carcinoma. A multimodal nanoparticle consisting of iron oxide, silver sulfide, and a NIR fluorophore successfully provided contrast for mammography due to the presence of silver sulfide [27]. Finally, magnetic particle imaging (MPI) was a modality explored with multimodal janus iron oxide (Fe3O4) to image cervical carcinoma. It was stated that the crystallinity of janus iron oxide allowed it to provide increased contrast on MPI compared with plain iron oxide (Fe2O3) [29].