Many pathogenic viral pandemics have caused threats to global health; the COVID-19 pandemic is the latest. Its transmission is growing exponentially all around the globe, putting constraints on the health system worldwide. A novel coronavirus, severe acute respiratory syndrome coronavirus-2 (SARS-CoV-2), causes this pandemic. Many candidate vaccines are available at this time for COVID-19, and there is a massive international race underway to procure as many vaccines as possible for each country. However, due to heavy global demand, there are strains in global vaccine production. The use of a plant biotechnology-based expression system for vaccine production also represents one part of this international effort, which is to develop plant-based heterologous expression systems, virus-like particles (VLPs)-vaccines, antiviral drugs, and a rapid supply of antigen-antibodies for detecting kits and plant origin bioactive compounds that boost the immunity and provide tolerance to fight against the virus infection. This review will look at the plant biotechnology platform that can provide the best fight against this global pandemic.

In late 2019, a potentially lethal outbreak of novel coronavirus (SARS-Cov-2) with the fatal respiratory syndrome was reported in Wuhan, China [1]. Up to June 2021 (sixteen months after its emergence), it has caused more than 175,306,598 cases of infections and more than 3,792,777 deaths worldwide, affecting 223 countries (WHO) [2]. COVID-19 has a higher mortality rate (~2.2%) and transmissibility than the influenza A virus subtype H1N1 pandemic, which has a mortality rate of around 0.02%.

Governments are trying to control this outbreak by emergency containment and rapid testing. These measures will slow the infection rate, reduce the mortality rate, and prevent the healthcare system from collapsing. In addition, it will allow researchers to have enough time to develop fast testing kits and treatments that limit the infection and the candidate vaccine to immunize the population. Researchers working on plant-based vaccines can also play a crucial role during this crucial time by using their knowledge and platform to develop a reagent as early as possible compared to months and years based on a cell-based platform.

2. Progress in Prophylactic and Therapeutic Treatments against COVID-19

Adenoviruses are vectors used to deliver vaccine antigens to the target host tissues and are being tested in several gene therapies and vaccine studies [5]. Another approach would be a DNA-based vaccine, where deoxyribose nucleic acid (DNA) codes for specific proteins (antigens) from a pathogen are injected into the body and taken up by cells and generate an immune response. Even though many countries are rushing towards generating vaccines for SARS-CoV-2, safety regulation guarantees should not be ignored [6]. Most of the candidate vaccines in advanced clinical trials have good efficacy data (Table 2).

Table 2. WHO list of candidate vaccines for COVID-19 in advanced trials [3].

IM = intramuscular; ID = intradermal. * This phase 3 trial assesses both the Wuhan (NCT04612972) and Beijing (NCT04510207) vaccine in the same study. ** Pending confirmation on the phase of the study, which is not specified in the registry.

Along with the inactivated vaccines approach, an alternative method should be explored for candidate vaccines. Since spike protein trimers are the primary binding sites of the ACE2 receptor of a host cell, it makes this protein an easy target for antibody neutralization (Figure 1) [7][8]. 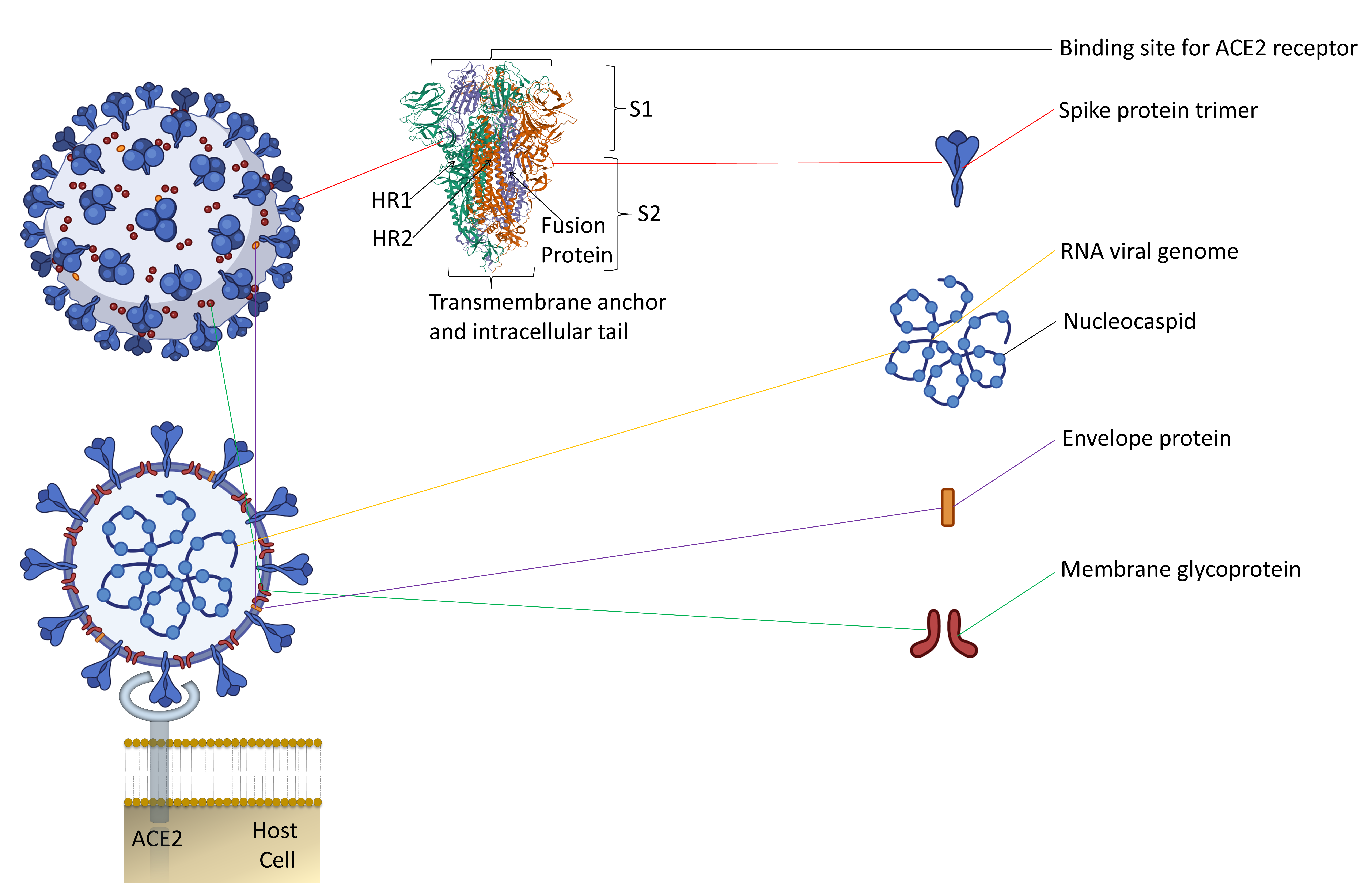 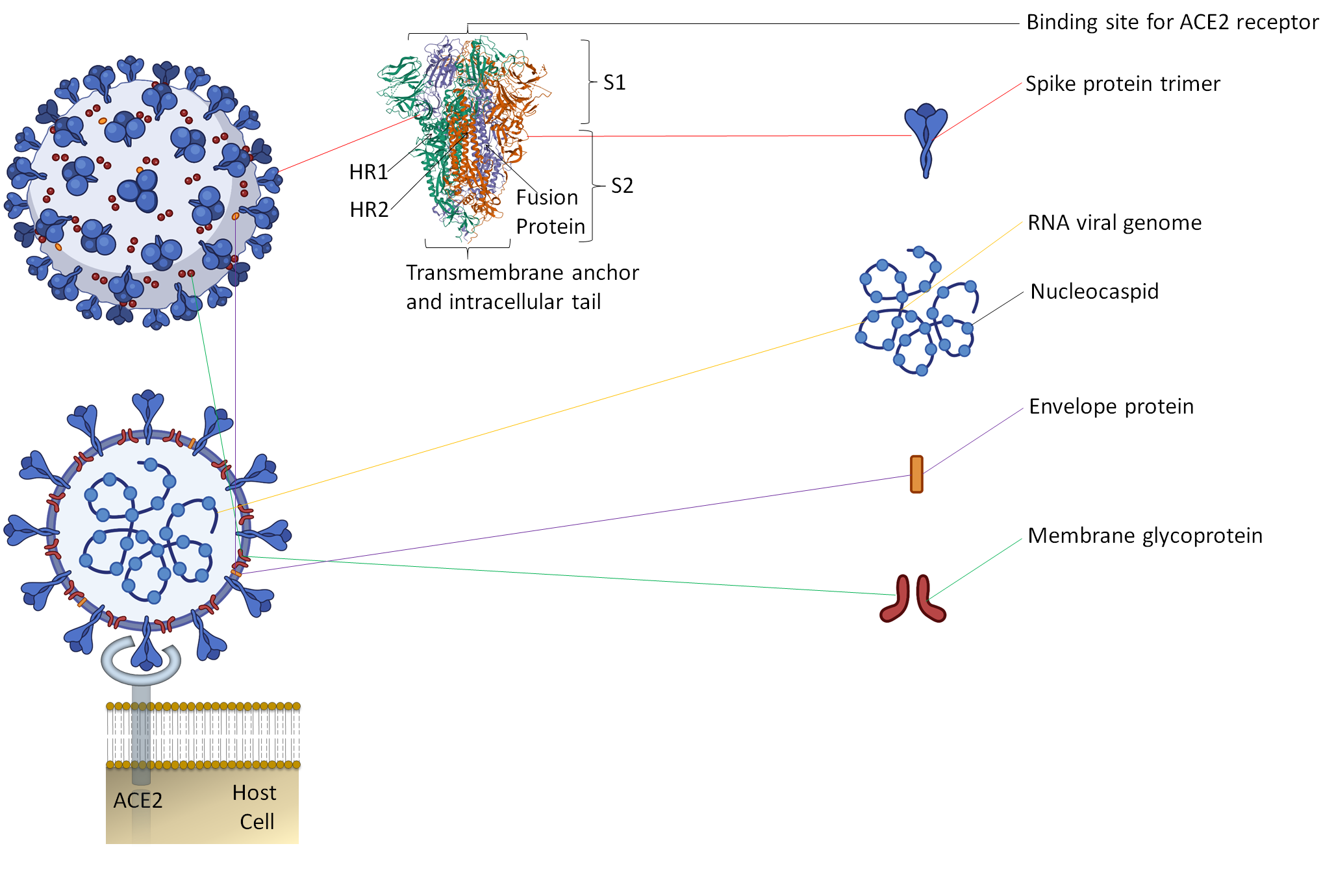 Another approach would be RNA-based vaccines. Here, instead of the standard vaccines where viral proteins are used to immunize, the messenger RNA vaccine will provide a synthetic mRNA of the virus, which the host body will use to produce an immune response [9][10][11][12][13][14][15]. The most significant advantage of the RNA vaccines is that they are translated in the cytosol, so there is no need for the RNA to enter the cell nucleus, and the risk of being integrated into the host genome is averted [16]. Inactivated vaccines usually cannot provide immunity as much as live vaccines. Several booster doses over a while are required to get uninterrupted immunity against particular diseases. There are other candidate vaccines also that used protein subunit of SARS-CoV-2. Protein-based subunit vaccine presents an antigen to the immune system without viral particles using a specific pathogen protein (Table 2). These candidate vaccines have shown well-documented immunogenicity in the preliminary studies [17]. Using bioinformatics for the detailed analysis of sequence analysis is another approach to predict immune response for SARS-CoV-2 [18]. SARS-CoV-2 structure’s analysis will help in understanding the response strategy towards this virus. There are reports about the structure, function, and antigenicity predictions of the SARS-CoV-2 spike glycoprotein [8]. These predictions will be important for the designing of vaccines and inhibitors of viral receptors. Another study reports that the crystal structure of SARS-CoV-2 main protease provides a basis for the design of improved α-ketoamide inhibitors [19]. These recent studies will help in the ongoing effort to produce effective vaccines, but in parallel to this vaccine development, a reliable alternative platform that can provide rapid and large-scale vaccine production is needed. The platform must be designed to keep in mind low cost, easy distribution, and special campaigns in poor and developing countries.

In plant-based expression systems, there are three main approaches for recombinant protein production [21]: (1) by developing transgenic plants carrying stably integrated transgenes [22]; (2) using cell-culture-based systems equivalent to microbial, insect cell, and mammalian systems; and (3) by transient expression of foreign genes in plant tissues transformed by either a viral infection or agroinfection [23][24][25]. For a foreign gene’s proper function in a host cell, the gene must replicate into many copies in the cell’s nucleus; hence, these transient expressions happen at the nucleus. Currently, transiently transformed plants at nuclear or chloroplast are used to produce expressed recombinant protein. In Table 3, the expression method is summarized.

Table 3. Summary of the different expression approaches for producing plant-based vaccines and their function as MERS/SARS-CoV-1 vaccines.
Heterologous expression of a protein in plants by delivering virus-based vectors to their target via agroinfection is another approach. This method has a dependence on the DNA/RNA replication mechanism, untranslated regions (UTRs), and promoter efficiency in plant viruses. This method can produce high-yield proteins. For example, GFP yields as high as 5 mg/g of fresh weight tissue (FWT) are reported [31]. Plant biotechnology allows foreign protein expression in plants and projects a short-term approach for a potential vaccine candidate for SARS-CoV-2. The method of this expression will depend upon the nature of the targeted antigen. In the following section, we have discussed the idea of using a plant biotechnology bases platform as a possible approach for SARS-CoV-2 vaccine development (Figure 2). 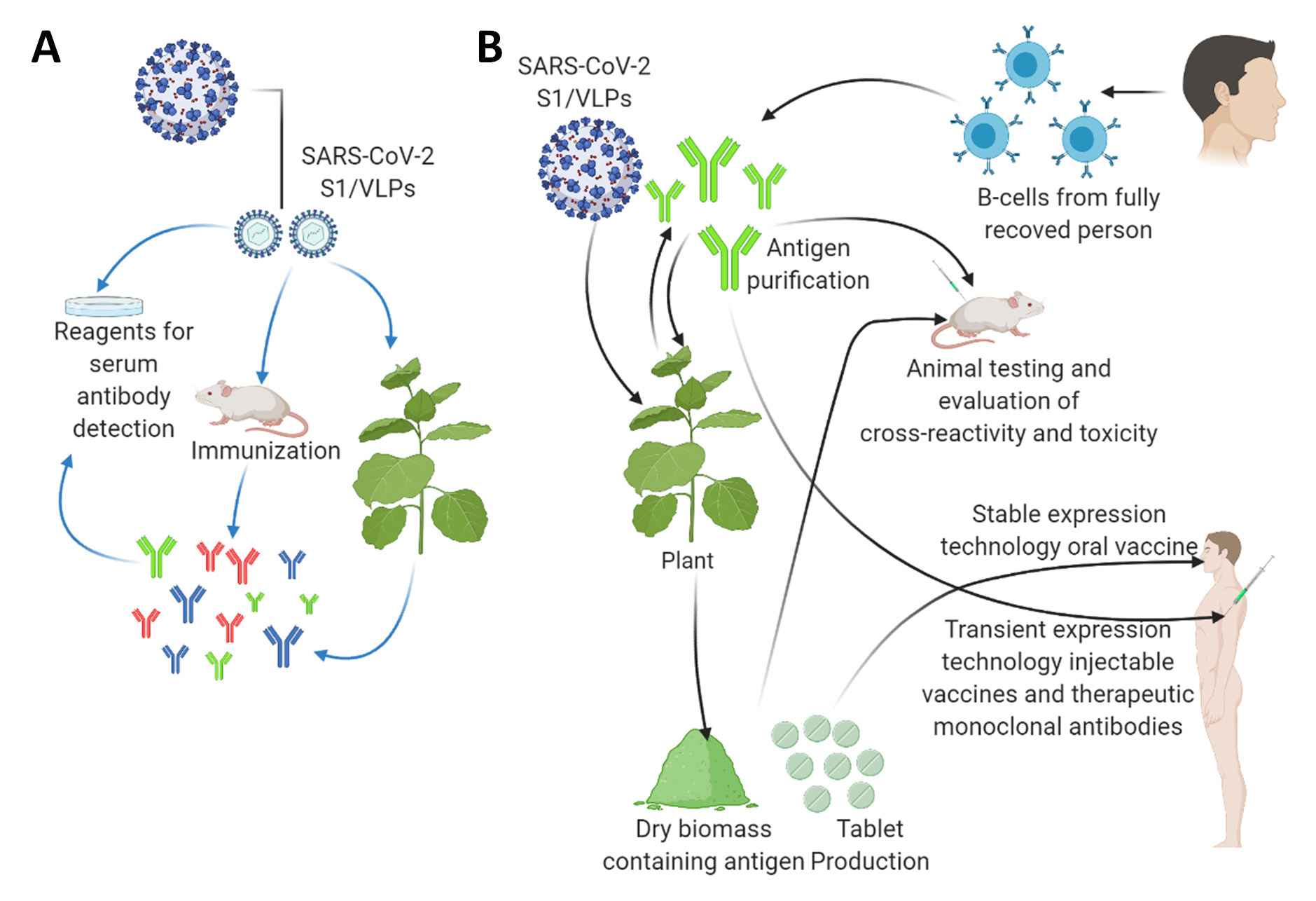 Figure 2. The applications of plant biotechnology-based production of diagnostic reagents and vaccine candidates against the SARS-CoV2. (A) Plant-based production of diagnostic reagents indicated by blue arrows. (B) Plant-based production of vaccine candidates against the SARS-CoV2 indicated by black arrows. A tobacco plant is shown as a model plant for both transient expression and stably transformed transgenic plants as a large-scale production platform.  They can also be applied as a boosting agent. This figure is prepared by using Biorender (https://biorender.com/, accessed on 12 June 2021).

Nanoparticles (NPs) and virus-like particles (VLPs) are the protein structures that have similarities with native viruses but do not contain a viral genome nor have any infectious ability, thus creating a safer platform for vaccine candidates [32]. In the 21st century, many platforms for NPs/VLPs design have been evolved, including the usage of site-specific ligations-driven covalent links of individual folded proteins, viral core proteins, and non-covalent intramolecular formation of de novo protein nanostructure via intermolecular interactions. Data shows that the combination of the vaccine candidate and GSK’s pandemic adjuvant-induced a significant humoral immune response after two doses. Kentucky BioProcessing, Inc. (KBP) (formally known as Large Scale Biology Corp.) candidate vaccine, COVID-19 Subunit Vaccine KBP-201, is in the 2nd phase of clinical trials. They have used Nicotiana benthamiana as a host plant/expression system. Both candidate vaccines have two doses scheduled after 21 days gap. They can be administered via the intramuscular route (Table 5). There are four other candidate vaccines from iBio, Inc. (New York, NY, USA), Akdeniz University (Turkey), Shiraz University (Iran), and Baiya Phyto-pharm/Chula Vaccine Research Center (Thailand) that are in the pre-clinical stage and have used the plant as an expression system. Many reports explain the role of NPs in SARS-CoV-2 in detail [33][34][35][36][37][38][39].

For the production of VLPs, several studies target Poliovirus, hepatitis B virus, human papillomavirus, influenza virus, Norwalk virus, human immunodeficiency retrovirus 1, rift valley fever virus, and foot and mouth disease virus [44][45][46][47][48][49][50][51][52][53][54][55][56][57]. A study reported that in morphology, developed VLPs were similar to the virions of SARS-CoV-1. Another report stated that envelope proteins (E) and membrane (M) are sufficient enough for the efficient formation of virus-like particles, and they could be visualized by electron microscopy [58]. VLPs formed by membrane proteins of different origins activated immature dendritic cells (DCs) and enhanced the secretion of cytokines and co-stimulatory molecules’ expression [59].

Given that HA protein expression in plant-made VLPs vaccine successful, similarly, it is believed that for the development of SARS-CoV-2 VLPs, S protein expression might be necessary. Considering this, targeting the trans-Golgi secretion route by nuclear expression might yield a protein that, via secretion and glycosylation process, can produce VLPs for SARS-CoV-2 [60]. Forty-seven plant-based candidate VLPs vaccine has been developed for a wide range of disorders [61].

There are a few risks that might be involved with the plant biotechnology platform-based vaccine [62]. Incorrect frequency or wrong dosage could lead to tolerance and reduce vaccine effectiveness in some candidates [63][64]. To overcome this limitation, proper clinical trials in animals and humans must determine the doses to generate a proper immune response. It requires almost five to six weeks to produce a plant-based vaccine compared to a five to six-month period preparing the vaccine in chicken eggs, which the various vaccine manufacturers are currently practicing. Along with these developments, monoclonal antibody production in plants can also provide another alternative plasma transfusion strategy. Antibodies developed in plants will be affordable and have safer intravenous treatment for critically ill patients (Figure 2). There are already approved plant-based vaccines for influenza that give hope to the potential of plant-based anti- COVID-19 vaccine. The Coalition for Epidemic Preparedness Innovations (CEPI) estimated that global vaccine manufacturing capacity would be only 2–4 billion doses annually, and by 2023–2024, not enough vaccines can be manufactured to meet global demands. This capacity might also be product-specific, along with some limitations: for example, whole-inactivated virus vaccines must be manufactured in a facility with biosafety level 3-capability. In addition to this administration, the regulatory process of licensing, technology transfer, and the scale-up of vaccine manufacturing, purification or formulation might be time-consuming, and fulfilling these requirements in a time-bound manner will remain challenging. A plant-based vaccine platform can fill the gap and help maintain the demand/supply ratio. In the coming years will be crucial to see the real potential of a plant-based vaccine for COVID-19 or any other pandemic.