In the past 25 years, the creation of commercialization opportunities for smallholder producers has taken primacy on the development agenda of many developing countries. However, most of the smallholder producers are invariably less productive than commercial farmers and continue to lag in commercialization [1][2]. Across Africa and Asia, many governments together with the private sector and non-governmental institutions have extended different forms of support to reduce the lag in commercialization by smallholders and to leapfrog their transformation to commercial farming [2][3]. While the deployment of such measures might be the necessary conditions for bolstering the sustainability of farmers, it is posited that, unless agricultural extension approaches are radically transformed, the intents of these strategies are most likely not to be realized [3][4][5].

The public extension system is the largest and most common source of agricultural information and services for smallholder farmers in developing countries [6][7]. It is one of the major undertakings of the government, with the Ministries of Agriculture having a de facto monopoly over provision of the extension and advisory services [8][9][10]. However, there is a widespread concern among the developing countries that public extension systems are underperforming and have failed to effectively push the smallholder commercialization agenda [11][12][13].

Currently, there are studies suggesting the potential of linking extension systems with Information and Communication Technology-based strategies to promote and hasten farmer-farmer interactions and the ability of farmers to effectively communicate with extension and researchers (feedbacking) [1,12,18,22,23]. However, it is imperative to firstly identify and characterize agricultural extension approaches being used and explores their theoretical and practical application in various developing countries.

2. Limitations of Improving the Sustainability of Smallholder Agricultural Production and the Role of Agricultural Extension in Developing Countries

Smallholder farming in many developing countries is challenged by several factors. These can be broadly classified into ecological, economic, social, and institutional challenges. Some major ecological and production challenges being faced by the farmers include severe incidences of droughts [14][15], water and feed shortages, poor breeding management practices, and limited animal welfare and health skills [16]. Apart from that, lack of access to formal, high-value output markets as well as poor access to finance and infrastructure by smallholders are some of the challenges limiting their environment for economic growth and development [17][18]. Furthermore, limited access to extension services by the farmers, especially those in remote areas, is a key limitation for their commercialization [9]. Literature is replete with shortfalls associated with the provision of public extension services to smallholder farmer [3][11][13][19][20]. In developing countries, the public extension systems are heavily under-resourced, over-stretched, lack skilled human resource, and infrastructural support, and are faced with an overall decline in investment [10][12]. Further, the systems are often characterized by high farmer-to-extension ratios as the number of trained extension agents is limited [21][22].

Invariably, the role of agricultural extension and advisory services is pertinent to effecting change and driving the rural development imperative through smallholder agricultural production. Across Africa and Asia, agricultural extension has long been one of the major conduits of agricultural development and transformation leading to rural poverty reduction and increased food security [23][7][8]. Despite extension having been criticized for failing to deliver such results adequately, it is perceived to have remained the bedrock of smallholder agricultural production [13]. This is because it brings farming information, inputs, facilitates access to markets and credit facilities, and promotes the organization and training of smallholder farmers and producer groups for improved production, livelihoods, and the ensuing growth in household income and well-being [5][24][19][25].

The rise in agricultural sciences and weak research-extension-farmers linkages in Africa and Asia in the nineteenth century allowed more technology to be created outside the farms by both public and private research organizations [45]. However, this gave birth to technology transfer approaches which somewhat involved centralized and top-down planning to assist in the dissemination of modern research innovations from experts to farmers [19,29,46].

The Ministry-based, also termed public extension approach, has traditionally been the most dominant extension system worldwide [6][7] and was adopted by many countries in Africa and Asia. Invariably, under this system, the key responsibility for agricultural extension activities often rests with central governments, since agriculture is the state subject [10]. The technology transfer approach is largely supply-driven, efficiency-based, and focuses on specific national objectives, such as increasing yield and reducing costs of production on national commodities [25]. .

According to Nagel [26], the T&V extension approach is not a separate but one way to organize Ministry-based extension. The T&V approach was generally introduced for transferring the latest agricultural technologies and practices from research to farmers [27][28]. Proponents of the approach believed that transfer of technology can be achieved by increasing and regularizing farmer visits by extension workers, strengthening the supervision of extension programs and workers, providing extension workers with specialized knowledge and resource support, and increasing the extension agent-farmer ratio through recruitment and training of more frontline extension staff [25][26][29][30]. Thus, the T&V approach is more centralized, linear, top-down, and is based on a hierarchical structure and a rigorously planned schedule to be followed by extension officers [31][26][32].

The commodity specialized extension approach dates to colonial times [33] and is currently being used across Africa and Asia [6][34]. Implementation of the approach follows a planned and coherent set of extension procedures designed to promote the production of high-income livestock projects such as domestic-oriented dairying [33] and predominant export or cash crops [10][35]. It is also used to promote the utilization of strategic agricultural inputs such as cattle dipping acaricides, and crop fertilizers, and herbicides. Commodity specialized extension is centralized [10][32] and planned based on a self-financed model with coordination from the government [25][35][34] or private organizations working with contracted farmers [26].

Participatory extension approaches use farmers to deliver extension services to fellow farmers in group setups with frontline extension agents serving as facilitators, and not teachers. Program planning for the approaches is usually controlled locally by farmer groups or farmer associations [58]. These approaches recognize that farmers are already key sources of information for other farmers as argued by Mapiye et al. [12]. By using the existing farmers’ social networks and group learning arrangements, participatory approaches promote a reinforcing effect which is essential in mobilizing farmers to embrace local agricultural programs and adopt new technologies [27,32]. Such actions include information sharing, peer consultations, collective problem diagnosis, and decision-making [47] using meetings and demonstrations with small, large and general community groups [32].

The Farmers Field School (FFS) came to Africa from Asia, where it was successfully used to educate farmers about integrated pest management through farmer group learning [25][36]. The approach is widely accepted in these regions because it is participatory and uses a non-formal education approach where extension officers are more of facilitators than instructors [28][37]. The approach is group-based and uses iterative, interactive and experiential adult learning practices involving periodic meetings following a planned schedule to enhance the development and transfer of innovation [7,44]. Thus, during the meetings, farmers are assisted to carry out their research, analyze and test farm problems, and develop appropriate solutions for the problems [43,58].

The project-based extension approach focuses on a defined location (community), for a given period (usually, some few years) [38][39], and emphasizes work with disadvantaged farming groups to alleviate poverty [26]. Invariably, the approach focuses on what is needed by both the beneficiaries and donors [32] and involves substantial infusions of outside sourced funds and resources to achieve that common goal [31]. Even though substantial financial and technical input support comes from international development agencies, project-based approaches may be controlled at central government levels. The aim is largely to demonstrate the potential of certain new technologies and methods that could be extended and sustained after the project period [39].

The farming systems research–extension (FSR-E) approach is centered on solving farmer problems through holistic, systems-based, localized, and iterative technology development and delivery processes [32][39]. Early forms of this approach driven by economists and social scientists began with experiences in Africa, Asia, and Latin America [40]. The FSR-E approach aims to develop practices that are tailored to fully meet the heterogeneous demands of the farmers [41][40]. However, the agricultural extension content must be developed off-research station but through on-farm research processes involving local farmers and their farms [53,65].

Cost sharing is an emerging extension approach in developing countries [29]. The approach requires that users pay a fee for accessing agricultural extension services that benefit them [38]. The approach targets those farmers who do not have the means to pay the full amount for accessing the extension services [39]. Its primary purpose is, therefore, to promote the use of agricultural programs that are likely to meet local situations, contribute to farm improvements, and make frontline extension agents more accountable to the interests of the farmers [32][39].

The education institution approach was developed through the United States Land Grant university experiences. The approach was introduced to Africa and Asia by donor agencies such as USAID [25]. An education institution extension is a decentralized approach that is often implemented by well-established educational institutions (Agricultural schools, colleges, and universities) with the technical knowledge and research capacity to conduct the extension activities especially to poorly resourced farmers [31][32]. The approach, therefore, forms part of the institution’s outreach activities [53].

The educational institution extension approach is facilitation for empowerment approach which builds practical knowledge in the classroom and technical skills in the farming field. Program planning for the approach tends to be controlled by those who determine the curriculum of the educational institutions. Generally, in this model, industry (research), as well as intermediary players, become part of the extension system [46].

4. Towards a Revolutionized Extension System in Developing Countries

Figure 1. The schematic presentation on the prospects of revolutionizing agricultural extension using ICTs.

The provision of extension services has continued to evolve with efforts pointing to the development and application of ICT-based innovations [10][28]. Already, the research discourse in this area underscores the potential for ICTs in improving the provision of agricultural information and advisory services towards smallholder farmers [1][46][28].

The capacity of ICTs to bring this new momentum to smallholders seems even more compelling due to the current increased investments in research and development and the upsurge of organizations promoting their use in rural farming communities especially in East Africa [71]. Also, The ever-increasing availability and uptake of mobile phones (Figure 2) present a huge potential for the proliferation of all-inclusive ICT-based innovations among smallholder farmers [1][44]. 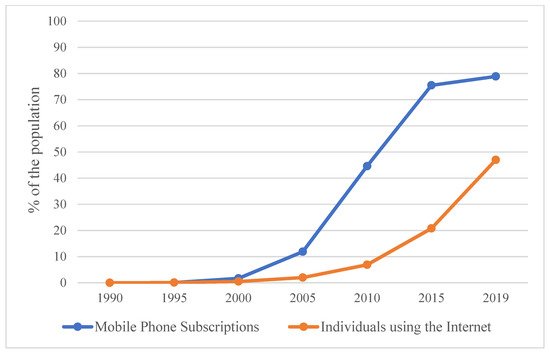 Internet is also an important component of digitization, and its access by smallholder producers further unlocks the prospects of driving agricultural production in the sector through digital-based strategies. As shown in Figure 2, internet use is also projected to continue growing in developing countries and specifically within smallholder agricultural systems [48].

Apart from that, there are dozens of various agricultural mobile applications (Apps) and web-based platforms being developed and implemented to support agricultural extension delivery and, hence, transformation of smallholder farmers [46][43][49].

Lastly, one of the greatest potentials for revitalizing extension is the fact that smallholder farmers are inherently agricultural innovators, and that they actively engage in sharing innovations among themselves and are eager to communicate with extension experts [50][51].

In order to effectively introduce ICTs in extension delivery among the developing countries, their policies should focus on improving infrastructure in the rural farming communities which include expansion of electrification programs as well as widening access to internet service and mobile network coverage by resource poor farmers [23].