Cystic fibrosis (CF) is an autosomal recessive, life-threatening condition affecting many organs and tissues, the lung disease being the chief cause of morbidity and mortality. Mutations affecting the CF Transmembrane Conductance Regulator (CFTR) gene determine the expression of a dysfunctional protein that, in turn, triggers a pathophysiological cascade, leading to airway epithelium injury and remodeling.

In principle, epithelial repair follows different types of injury. In the case of CF, the damage to the airway epithelium can be caused by respiratory infections, in particular Pseudomonas aeruginosa (Figure 1) [38] and inflammatory mediators [39]. Also bacterial products secreted by P. aeruginosa, triggered by the quorum sensing (QS) network and involved in bacterial virulence, pathogenicity, and biofilm formation, have been shown to reduce airway epithelial repair rates [40][41][42]. On the other hand, heightened production of inflammatory mediators and reductions in anti-inflammatory molecule secretion by inflammatory and epithelial cells in CF lungs play a role in injury and remodeling of respiratory epithelia [43][44][45]. 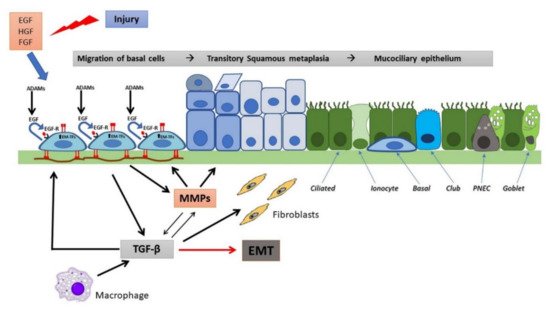 Figure 2. Wound repair and regeneration in a non-CF airway epithelium. Following injury, many cytokines and growth factors (e.g., EGF, HGF, FGF) are secreted in the wound repair microenvironment, which incite in basal cells a migratory and proliferative phenotype. Shedding of EGFR ligands (e.g., EGF) by ADAMs and binding to EGFR in an autocrine or iuxtacrine manner are key events involved in stimulation of cell migration and proliferation. Afterwards, MMP secretion by regenerating epithelial cells and subsequent TGF-β activation lead to genetic expression changes, related to EMT stimulation and activation of EMT-transcription factors (EMT-TFs). Epithelial cells and macrophages release TGF-β that induce ECM component deposition by epithelial cells and stimulate fibroblast activation, resulting in further matrix deposition. These events provoke alterations in junctional complexes and reorganization of actin cytoskeleton (not shown), modification of various integrin expression with β1-integrins increase at basal side and ectopic expression on the apical side, deposition of inflammatory ECM glycoproteins (e.g., fibronectin is shown) and its remodeling exerted by MMPs. TGF-β and MMPs enhance each other in a positive way. This process proceeds with the formation of a squamous stratified epithelium and subsequent pseudostratification and mucociliary differentiation.

2. Pathological Processes in the CF Airways