Structural sandwich composites have been widely used in many engineering fields, and this trend is expected to continue due to their superior mechanical properties, thermal insulation and acoustic damping. However, to further improve their mechanical properties, literature reports significant benefits obtained with nano-reinforcements. In this context, nanoclays are the most popular nano-reinforcements for polymeric nanocomposites, due to their relatively high ion exchange capacity, high aspect ratio and economic advantages. In order to stablish a systematic understanding for application in design procedures, this work intends to summarize all studies available in the open literature about this topic.

The incorporation of nanoclays in the skin of a sandwich composite is usually done through the matrix (where the epoxy resins prevail). In this case, they increase the toughness and improve the impact performance of these materials. However, until now, few studies have focused on studying the effect of adding nanoclays on the skins.

In 2008, Kim et al. [1] developed a sandwich for stealth radome (radar + dome) applications on aircrafts and warships. These sandwiches are composed by PVC foams and skins of E-glass fabric and an epoxy resin reinforced by nanoclays. Four different contents of nanoclays, from 1 wt% to 4 wt%, were used in this study. According to our best knowledge, they were the first researchers to incorporate nanoclays into the skin of a sandwich composite and to characterize its mechanical performance. For this purpose, 3-point bending tests were performed and, regardless of the nanoclays content, the flexural strength showed little variation, because the small amount of nano-fillers promoted a negligible effect on the mechanical properties of the composite. Finally, the water diffusivity decreased with the increase of nanoclays content because the diffusing water path increased by the presence of nanoclays (which have a plate-type shape).

Ávila et al. [2] produced, in 2009, sandwich panels with closed-cell PS foams (Styrofoam®) and epoxy resin/glass fiber skins with different contents of nanoclays (0, 1, 2, 5 and 10 wt%) in order to improve the impact strength. For this purpose, low-velocity impact tests were performed with energies between 25 and 75 J, which are enough to cause damage ranging from a barely visible delamination to perforation. These authors related the panel stiffness with the load-deflection response, assuming that is linear under low velocity impact, and they observed an increase in stiffness with the addition of nanoclays up to 5 wt% (consequently, the panel overall bending rigidity), but larger contents cause a decrease in stiffness. In this case, when the saturation is reached, it promotes agglomerations that are potential crack nucleation points. Involving similar sandwich composite plates, these authors developed another study in which two sets of impact tests were performed: low velocity and high mass test and high velocity and low mass test [3]. The energies applied ranged from 5 J to 75 J. The results showed that the addition of 5 wt% of nanoclays led to the highest energy absorption, which is in line with the previous work. Simultaneously, depending of the energy level (velocity), two transitions were observed in terms of failure modes: from upper facesheet cracking plus core indentation to upper facesheet tearing plus core crushing, and from upper facesheet tearing plus core crushing to lower facesheet plus core debonding. All results were compiled by the authors in 2010 [4], where it was emphasized that the highest energy absorption was obtained with 5 wt% of nanoclays. A higher content of nanoclays led to immiscible nanostructures, promoting “hot spots” for cracks nucleation. According to the authors, epoxy matrices have a saturation limit between 5 wt% and 10 wt% of nanoclays [4].

In the same year, Gupta et al.[5] evaluated the impact strength and dynamic mechanical properties of vinyl ester nanocomposites incorporating nanoclays (1.25 wt% and 2.5 wt%) or exfoliated graphite nanoplatelets (1.25 wt% and 2.5 wt%) for use in sandwich skins. Dynamic mechanical tests were performed in single cantilever deformation mode, with fixed-fixed boundary condition and temperatures between −50 and 150 °C with an increase of 3 °C/min, while low-velocity impact tests were performed on a drop-weight impact test machine according to the ASTM D6110-06 standard. From the dynamic mechanical tests, it was concluded that all properties (storage modulus, loss modulus, loss factor, area under tan δ and glass transition temperature) increased with the nanoclays content, similar to that observed with graphite nanoplatelets. However, the last nano-reinforcement promoted higher improvements than those obtained with nanoclays. For example, the loss factor increased around 80% with the addition of 2.5 wt% of nanoclays and about 125% for the same content of graphite nanoplatelets. Regarding the impact tests, the same tendency was observed in terms of energy absorption, reaching improvements around 100% when 2.5 wt% of nanoclays were added [5].

In 2012, Anbusagar [6] investigated the influence of nanoclays content on sandwich composites under flexural and impact loading. Four different combinations of sandwich composites were prepared with fiber glass/nano-modified polyester skins (using 0 wt%, 2 wt%, 4 wt% and 6 wt% of nanoclays) and a polystyrene foam core. Flexural tests under three-point bending were performed to obtain the core shear stress (τ) and the skin bending stress (σ) according to the ASTM C 393-94 standard, while the Charpy impact strength was determined according to ASTM D6110 standard. It was observed that the flexural strength and stiffness increased up to 4 wt% of nanoclays, with improvements of 16.3% in terms of flexural strength, while the highest impact strength was obtained with 6 wt% of nanoclays and with improvements of 50% compared to the control samples.

In 2013, Reis et al. [7] studied the benefits of nano-enhanced resins on the impact response of sandwich composites produced by fiber glass/epoxy skins and balsa wood core. The epoxy resin was enhanced by nanoclays with special treatment to improve their dispersion and interface adhesion. More details about the treatment and the dispersion/exfoliation on the epoxy matrix can be found in [8]; the nanoclays content employed was 3 wt% of the epoxy resin/hardener mixture. Authors performed impact tests with a drop-weight testing machine and energies from 4 to 36 J were used. After impact tests, the residual bending strength was evaluated by three-point bending tests. It was conclude that sandwiches enhanced by nanoclays have better impact properties than the control samples [7]. For example, the benefits obtained in terms of maximum displacement were about 23.4% lower than those measured on the control samples, whereas the elastic recuperation was about 45.4% higher. Regarding the failure mechanisms, the greatest damage occurred at the highest energies and, while the control samples showed matrix cracking on both facesheets (upper and lower) with significant damage on the balsa core, the nano-enhanced sandwiches exhibited damage only on the upper facesheet. Moreover, as shown in Figure 1, the neat sandwiches showed lower residual flexural strength for all impact energies, because the nanofillers increase the stiffness of the facesheets and, consequently, the panel overall bending stiffness. 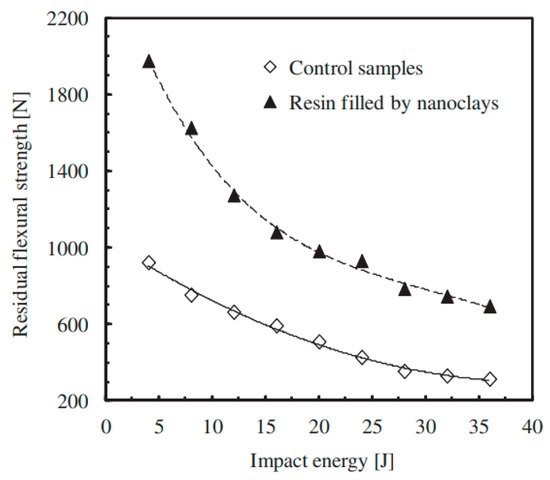 In 2014, Anbusagar et al. [9] evaluated the effect of nanoclays modified polyester resin on flexural, impact, hardness and water absorption properties of jute and glass fabric hybrid sandwich laminates. For this purpose, contents of 2 wt%, 4 wt% and 6 wt% of nanoclays were used. It was possible to conclude that both the flexural strength and the flexural modulus increased up to 4 wt% of nano-reinforcements, but no additional increase was observed for higher contents. In this case, the benefits obtained are 90% and 67% higher than the strength and modulus of the neat jute laminate (100 wt% of jute fibers), respectively. Regarding the impact strength, hardness and water absorption, the optimum loading was 6 wt% of nanoclays. For example, the impact strength increased around 5.5 times the value obtained for neat jute laminates (100 wt% of jute fibers), the hardness increased around 27% compared to the value obtained for composite laminates (60 wt% of jute fibers plus 40 wt% of glass fiber). The maximum percentage of moisture absorption after 744 h of soaking decreased by 1.5 times the value obtained for neat composite laminates. This was explained due to impermeable fillers, like clay and glass fibers, which act as barriers and prevent the direct contact between jute and water [9].

More recently, in 2018, Anbusagar et al. [13] carried out low velocity impact tests (using a weight-drop impact machine) on sandwich composites similar to those described in ref. [6] and [9]. The impact energy used in this study was 30 J and, as reported in [8], only neat sandwich composites and sandwich composites reinforced by 4 wt% of nanoclays were analyzed. It was possible to conclude that all parameters obtained from the impact tests are very similar between both sandwiches. For example, the peak load was only 2.2% higher than the value obtained for the neat sandwich, while the displacement and absorbed energy were 4.2% and 2.5% lower, respectively. On the other hand, considering the damage degree, which is defined as the ratio between the energy absorbed and the energy of impact (less than one up to incursion and equal to one when it occurs), this parameter reached the minimum value (0.24) for nano-enhanced sandwiches. These results clearly evidence the benefits obtained with nano-enhanced resins. Although the damage caused by the impact load is not visible in both sandwiches, authors evaluated the residual bending properties using four-point bending tests. For comparability, they evaluated the pre- and post-impact flexural properties. While the non-impacted samples showed values of strength and stiffness around 7.2% and 66.3% higher than those obtained for neat sandwich composites, after impact they are about 3.5% and 80%, respectively. This means that, after impact, the strength and stiffness decreased by 13.8% and 12.2%, respectively, for neat sandwiches, while these values are 16.7% and 4.9% for nano-reinforced sandwiches.

Finally, in 2019, Anbusagar et al. [14] gave continuity to another study, where the effect of modified nanoclays on low velocity impact damage area and damage tolerance capability was analyzed using sandwich laminates similar to those described in ref. [9]. For this purpose, low velocity impact tests were performed with impact energies of 10 J and 20 J and compression after impact (CAI) tests were carried out in order to evaluate the residual compressive strength and residual compressive stiffness of the sandwich laminates. The damage areas were estimated and a decrease of 19.5% and 13.5% was observed for the energies of 10 J and 20 J, respectively, when 6 wt% of nanoclays were added to the resin. Matrix cracking is the main damage mechanism observed in laminates involving only jute fibers (for 10 J the damage is not significantly visible on the bottom face of the laminate, but for 20 J it is visible on both sides due to fiber breakage and cracks in the matrix), while in hybrid sandwich laminates, delamination is the predominant mode of failure with the beginning between the jute core and the fiber glass skin interface. It was also observed that the residual compressive strength is very low for laminates involving only jute fibers and the damage tolerance capability improved with the incorporation of glass fibers and nanoclays reinforcement in the hybrid sandwich laminates. For example, the residual compressive strength for hybrid sandwiches with 6 wt% of nanoclays increased about 3.5 times over the laminates involving only jute fibers.