Functionalized thin films of mesoporous silica and titania can be used as scaffolds with properties as diverse as promotion of cell growth, inhibition of biofilms formation, or development of sensors based on immobilized enzymes. The possibility to pattern them increase their appeal as they can be incorporated into devices and can be tailored both with respect to architecture and functionalization. In fact, selective surface manipulation is the ground for the fabrication of advanced micro devices that combine standard micro/nanofluids with functional materials.

Mesoporous materials inspired by nature have been developed in the past decades, being particularly attractive because they allow for functional design and applications [1][2].

By definition, mesoporous materials present interconnected pores with a diameter in the range of 2–50 nm, which are arranged in ordered or worm-like architecture. The whole surface can be modified incorporating ions, functional groups or even molecules, that interact with the surface as well as with bulk material, changing its properties.

In this perspective, ordered mesoporous materials play a leading role due to their versatility in terms of structural characteristics and possible applications [3]. Recently, several studies demonstrated the multiple possibilities for biotechnological applications of mesoporous materials, thanks to their biocompatibility [4][5][6] and to their high surface area that makes them ideal vectors for drug delivery [7][8][9].

Among mesoporous materials, SiO2 is one of the most used, biocompatible substrates: its well-known and tested synthesis methods, and its predictable dissolution in a fluid with physiological compatible characteristics, [3][10][4] make it an attractive substrate in biomedicine. On the other hand, TiO2 shows remarkable photocatalytic activity, making it a possible choice for sterilizing coatings [5][6].

Mesoporous thin films can be prepared via different approaches [7][8][9]: the most commonly used is the sol–gel method [11][12], in which the self-assembly of the organometallic species is driven by the evaporation of the solvents and consequent condensation of the surfactant (EISA, Evaporation Induced Self Assembly).

The sol–gel is deposited on the surface of the solid support via spray-, dip- or spin-coating. EISA process allows the production of mesoporous film on non-flat surfaces, which is a great advantage for coating surgical devices such as implants or screws [5]. After deposition, the film must be consolidated in order to remove the templating agent and stabilize the inorganic structure. The templating agent should be removed either via calcination, extraction of the template with an adequate solvent [13][14], or via UV-O3 processing [15]. Top-down techniques like UV lithography [16][17][18], Electron Beam Lithography [19] and more recently X-ray irradiation [20][21][22] allow both the consolidation and the patterning of the mesoporous structure, in order to enable the precise positioning of mesoporous areas on the substrate for the design and fabrication of novel kind of microdevices.

Surfaces can be functionalized, to immobilize active molecules [23][24] and to change the mesoporous material’s properties. With functionalization, it is possible to tune its surface hydrophilicity /hydrophobicity [25][26], to protect it from non-specific interactions with the surrounding environment [27][28], or to avoid binding of non-specific molecules [29], tailoring the characteristics to the foreseen applications. When different hierarchical surfaces of mesoporous materials are present, each of them can be functionalized selectively [30].

Organic and inorganic groups, antimicrobial compounds [31], small biomolecules [32][33], or ions can be attached to mesoporous thin films, in order to change the material properties (Figure 1). 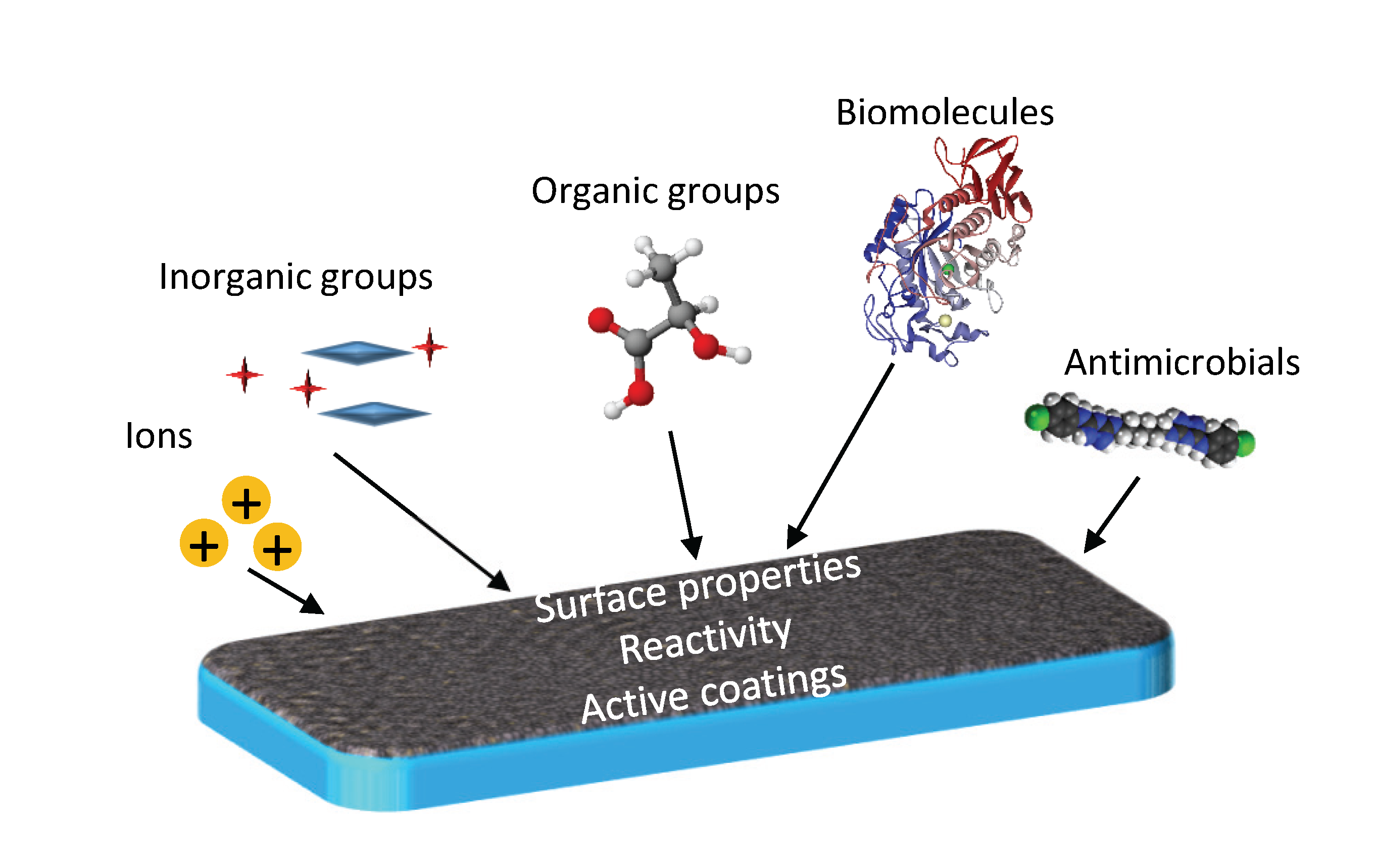 The functionalization strategy should be carefully designated [37][38][39].

In the following, we will summarize some applications of functionalized silica and titania thin films, either produced via co-condensation or via post grafting. Functionalization with groups ranging from ions to biomolecules is described, aiming to emphasize the importance of surface modification of mesoporous materials for biotechnology and biomedicine.

Functional groups, that involve for instance carboxy, hydroxyl, amino and thiol groups, or organometallic species, can be used to change the surface properties of mesoporous materials to favour specific interactions with bioactive molecules: [40].

Silica mesoporous nanomaterial can be functionalized with organosilanes [R-Si(OR)3] via post-synthetic grafting, mainly to change the hydrophilic/hydrophobic character without affecting the mesostructure [41]. A table which summarizes the main functional moieties reported in the following sections and their use for mesoporous silica and titania thin films is available in Sartori et al., Micromachines 2021, 12(7), 740.

3.1. Change of Hydrophilicity of the Surface

Organosilanes like aminopropyl triethoxysilane (APTES) ,[R=(CH2)3NH2], or 1H,1H,2H,2H-perfluorooctyl dimethylchlorosilane (PFODMCS) can be used to functionalize the mesoporous silica surface to alterate its wetting properties [42][43]. and can be used to attach other organic functional groups [44].

While titania thin films exhibit high chemical stability in biologically relevant conditions, silica thin films in aqueous environment are hydrolyzed and form silicilic acid or silicate species [4]. This progressive dissolution of the silica matrix promotes the release not only of the carried drug, but also of solubilized silica which might nucleate and accumulate randomly, posing a toxicity risk to the organism [45][46].

Functionalization with amino-groups [40][47] mercaptopropyl groups [48] or PEG [29] have a protective effect against the dissolution of the mesoporous silica film [46].

Surface modifications or two-steps functionalization might be necessary to adsorb enzymes or hydrophobic drugs to the mesoporous matrix [49].

Therapeutic molecules can be administered via mesoporous TiO2 thin films when a long-term, slow local drug release is desired, as in the case of bone-implant integration [50].

Recently, the emergence of antibiotic-resistant bacterial infections raised the necessity to develop materials with amtimicrobial effects for applications in the biomedical field. In particular, biocompatible coatings with antibacterial properties are gaining more and more attention from the scientific community involved in the research and development of materials for biotechnology.

Mesoporous silica and titania thin films are promising tools as coatings to prevent bacterial colonization on surgical implants, thanks to the possibility to load the material with antibiotic drugs coupled with its low adhesive properties for biofilm growth prevention.[50].

Functionalization with thiol groups allows for loading the mesoporous matrix with peptides or small molecules with antimicrobial activity [48][51].

Enzymes can be encapsulated into mesoporous materials [52] for the production of biosensors and bioreactors, both in co-condensation processes and by adsorption to the condensed material surface [53]. The encapsulated molecules are stable, even in environmental conditions that would normally lead to denaturation [54][55][56] such as extreme pH or temperature, and maintain their activity longer if compared to enzymes free in solution.

Despite the fact that silica substrates undergo biodegradation in in-vivo conditions due to the solubilization of silica matrix and the consequent formation of silicilic acid [4][58], studies have shown that they can be efficiently sterilized and still be used as bioactive coatings, having the advantage of being a source of ions necessary for cell differentiation if submerged in a solution containing inorganic ions similar to body fluid [3][59].

Several studies report the capability of mesoporous TiO2 to promote bone cell proliferation when functionalized with bioactive ions [60]. Magnesium, calcium, strontium or zinc are known to promote cell differentiation of bone cell precursors and can be adsorbed on TiO2 mesoporous material [34][61][62][63][64][65]. The slow release of these ions from the mesoporous material coated on bone-implant devices such as nails or screws, for instance, promotes better bone mineralization and implant integration. To circumvent the difficulties of complexing divalent ions to the mesoporous matrix, and to enhance their adsorption on the mesopores and subsequent slow release, surface-functionalized hybrid titania–silica films can be synthesized, coupling carboxylate groups via post-grafting to the surface before ion loading [66].

Silica and titania mesoporous thin films can also be combined to gain better antimicrobial performance still maintaining the optical properties. The photocatalytic activity of TiO2 when irradiated, can be coupled with the high surface area of SiO2 mesoporous thin films for selective immobilization and long-term release of antimicrobial substances such as Ag+ [67]. Mesoporous hybrid thin films loaded with silver ions, exhibit antimicrobial activity comparable to that observed in the substrates loaded with silver nanoparticles, having the advantage that the optical properties of transparent mesoporous coatings are not affected.