Increasing effort in research involving octopuses with a greater number of journals reporting research on these animals, as well as countries, institutions, and researchers involved. Some research themes lost importance over time, while some new themes appeared recently. Current data provide significant insight into the evolving trends in octopuses studies.

The octopuses and their close relatives, cuttlefishes, squids, and nautiloids are representatives of Cephalopods, with around 800 living species described to date [1]. Cephalopods possess interesting biological characteristics such as short lifespan, rapid growth, developmental plasticity, large brain, and sophisticated sense organs with the capacity for learning and memory, which are associated with the ability of rapid adaptation to environmental challenges (both natural and anthropogenic), and made them a resilient group, which may benefit from a changing ocean environment. Therefore, their global sharp increase is not surprising in terms of population in the context of rapid environmental changes in the last six decades [2]. Cephalopods are both important predators and prey in many marine environments and important fishery resources in many countries [3], which together with their peculiar biological features, attracted scientific interest making them optimal models for studies in several different fields of scientific inquiries [4]. Indeed, since the first half of the 20th century, cephalopods also started to play a pivotal role in scientific research, with a steadily growing body of research dealing with various aspects of their biology, including genetics, aquaculture, welfare, behavior, cognition, neurobiology, neuroethology, and the effects of climate change (see [4][5][6][7][8][9][10]).
Among cephalopods, interesting “model organisms” are octopuses. They include about 300 species belonging to several genera [1]. Octopuses have an exceptionally large, well-developed brain (the largest brain-body mass ratio among invertebrates), and flexible high-order cognitive behaviors (e.g., tool use, problem-solving), with a high degree of brain plasticity, learning, and memory [5][11][12][13]. They are active predators, owing to their peculiar sensorial system [14], which could be the evolutionary force-drive behind the development of their unique “abilities” [15]. The combination of very interesting features has fueled an increasing interest by the researchers making them an ideal “model species” not only for inferring brain functioning but also to gain general biological insight and understanding [16]. To date, a worldwide trend in scientific research on octopuses has never been explored using a bibliometric approach [17], while the evaluation of scientific research has become increasingly important in recent years. The bibliometric analysis is a useful tool for measuring the output of scientific research, using specific indicators to obtain information about trends in different fields [18][19].
The present study aims to provide a bibliometric analysis of biological research related to sources, countries, and affiliations dealing with research on octopuses. Furthermore, the structure of the topic was defined both at a conceptual level, by analyzing the co-occurrence network and thematic maps, and at the social structure level, through the analysis of collaboration networks and world maps. The most frequent and impactful journals, countries, research institutes, and their social and conceptual relationship were also identified. We provide a bibliometric analysis of the collection of scientific studies available to these authors related to octopuses from 1985 to 2020 (i.e., 36 years). The period was split into two blocks, comprising roughly the same number of scientific products, to analyze the evolution of the research topics over time. In this work, we provide data helping a wide range of users, not only scientists but also editors, in the choice of topics of emerging and major interest in octopuses studies.
The comprehensive science mapping analysis was performed by using Bibliometrix, a new and powerful R-tool [20] that offers various options for importing bibliographic data from scientific databases and performing bibliometrics analysis related to different items.

The KWP analysis in the EP identified five clusters, represented in a thematic map, according to their centrality and density ranking (Figure 1). 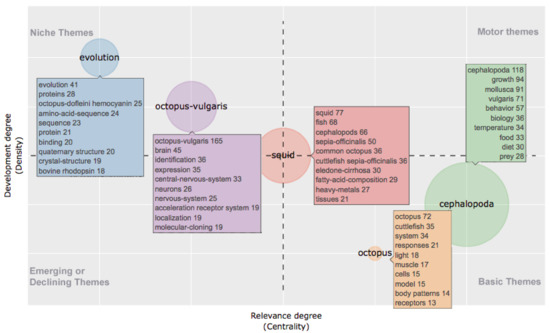 Figure 1. Thematic map showing clusters and the KeyWords Plus from 1985 to 2010 (“earlier period”) identified by the co-occurrence network. The X-axis represents the centrality (i.e., the degree of interaction of a network cluster in comparison with other clusters) and gives information about the importance of a theme. The Y-axis symbolizes the density (i.e., measures the internal strength of a cluster network, and it can be assumed as a measure of the theme’s development). Accordingly, the first quadrant identifies motor themes (i.e., well developed and important themes for the structuring of a research field); in the second quadrant are plotted highly developed and isolated themes (i.e., themes of limited importance for the field); the third quadrant contains emerging or declining themes (i.e., themes weakly developed and marginal); in the fourth quadrant fall basic and transversal themes (i.e., they concerns general topics that are transversal to different research areas of the field).
In this period there were no motor themes, while two basic themes located in the fourth quadrant showed high centrality and average density. One of them included “cephalopoda”, “growth” and “molluca” as the most co-occurring KWP, and also “food”, “diet” and “prey” which draw a research theme in “growth and nutrition”. The other theme had as indicative KWP “system”, “muscle”, “cells”, “body patterns” and “receptors” which are related to “morphology”. At the center of the graph there was a cluster characterized by taxonomic terms, but also containing KWP such as “fatty-acid-composition”, “heavy-metals” and “tissues” suggesting a topic related to “pollution impact” studied comparatively in different taxa. Two niche themes, with low centrality and high density, were located in the second quadrant. One of them was linked to “biochemistry” as it contained the KWP “proteins”, “amino-acid-sequence”, “sequence”. However, the presence of “evolution” as relevant KWP indicates that such studies were mainly aimed at modeling evolutionary patterns. The other one identified a theme on “neurobiology” and contained “brain”, “central nervous system” and “neurons” as the most occurring KWP. In the RP the KWP analysis identified four clusters as the result of the emergence/decline of some themes, in terms of gain/loss of centrality and density (Figure 2). 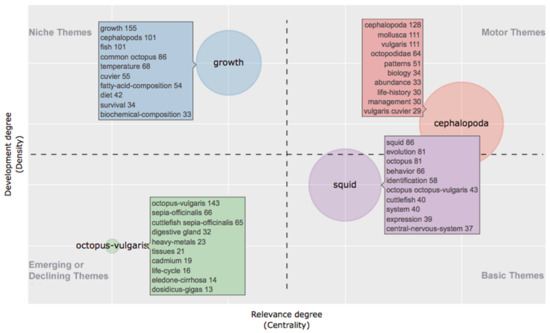 Figure 2. Thematic map showing clusters and the KeyWords Plus from 2011 to 2020 (“recent period”) identified by the co-occurrence network. The X-axis represents the centrality (i.e., the degree of interaction of a network cluster in comparison with other clusters) and gives information about the importance of a theme. The Y-axis symbolizes the density (i.e., measures the internal strength of a cluster network, and it can be assumed as a measure of the theme’s development). Accordingly, the first quadrant identifies motor themes (i.e., they are well developed and important for the structuring of a research field); in the second quadrant are plotted highly developed and isolated themes (i.e., they are of limited importance for the field); the third quadrant contains emerging or declining themes (i.e., they are weakly developed and marginal); the fourth quadrant includes basic and transversal themes (i.e., themes concerning general topics transversal to different research areas of the field).
One cluster was positioned in the first quadrant as motor themes in octopuses studies characterized by a high centrality and density. The most occurring KWPs were taxonomic terms, further than “biology”, “abundance” and “life-history”, identifying a theme on “ecology”. In the second quadrant (niche themes) there was a cluster characterized by the KWP “growth”, “cephalopods”, “fish”, as well as “temperature”, “fatty-acid-composition” and “diet”, drawing a topic on “growth and nutrition”. A cluster in the third quadrant was characterized by low centrality and density, which means that it was weakly developed and marginal and included taxonomic terms, and also “heavy-metals”, “tissue”, “cadmium”, identifying a research theme on “pollution impact”. The fourth cluster contained “squid”, “evolution” and “octopus” as the most common KWP, and also “behavior”, “identification”, “expression” and “central nervous system”. It appears to delineate a research theme dealing with “genes, behavior, and evolution” and was a basic theme. 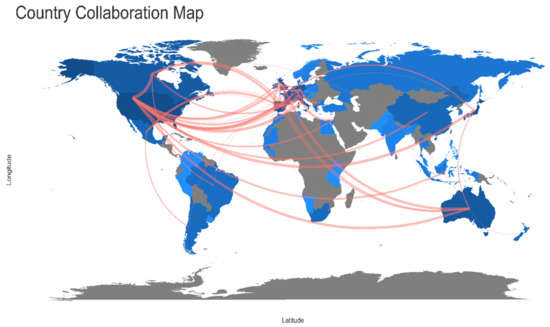 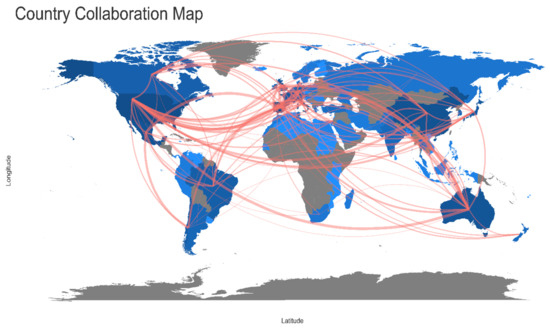