Pancreatic cancer (PC) is among the most devastating digestive tract cancers worldwide. This cancer is characterized by poor diagnostic detection, lack of therapy, and difficulty in predicting tumorigenesis progression. In recent years, the attention of many researchers has been concentrated on the role of extracellular vesicles and of a particular subset of extracellular vesicles, known as exosomes. These nanovesicles are able to deliver their cargos to recipient cells playing key roles in the pathogenesis and progression of many pancreatic precancerous conditions.

Pancreatic cancer (PC), in all forms, is among the most common and devastating digestive tract cancers worldwide. The majority of PC cases (over 85%) are attributed to pancreatic ductal adenocarcinoma (PDAC) [1]. Due to the frequently late diagnosis, the suboptimal efficacy of available therapies, and the unpredictable progression, the five-year overall survival rate of PC is smaller than 5% and the life expectancy of advanced PC is only 3–6 months [2][3].

Exosomes are a subset of extracellular vesicles (EVs) characterized by endosomal origin which are produced in TME by stromal and transformed cells [4]. Body fluids, such as blood, saliva, pancreatic duct fluid, cerebrospinal fluid, and amniotic fluid, transport exosomes to distal tissues or organs where they act via autocrine and paracrine routes [5]. The activation of various signaling pathways in target cells may be modulated by EVs, thus playing key roles in the pathogenesis and progression of several pancreatic precancerous conditions [6][7]. Indeed, these EVs are implicated in the transformation of various precancerous lesions into PC and in the progression of PC toward more invasive and metastasizing forms through the activation of mechanisms of angiogenesis, cell migration, epithelial–mesenchymal transition (EMT), and apoptotic resistance [8]. EVs may also serve as cytokine/immune-suppressive mediator shuttles in this setting. In fact, EV-enriched cytokines/immune-suppressive mediators may target their release where it is mostly needed to elude the immune system and hijack the host inflammatory response [9]. This, in turn, creates an environment that fosters tumor growth and progression. Among the inflammatory molecules identified in this immunomodulatory scenario, pro-inflammatory interleukin (IL) 1, IL6, tumor necrosis factor alpha (TNF-α), anti-inflammatory IL10, and transforming growth factor beta (TGF-β) have been indicated as major factors [10].

The role of EVs in mediating intercellular communication in cancer is widely recognized, with particular involvement in carcinogenesis, chemoresistance, and immunosuppression [11].

In PC, EVs produced by cancer and non-cancer cells have a crucial role in TME communication and modulation of metabolic activity within TME and at distant sites. These nanovesicles are also involved in PC progression, invasion and dissemination, escape from immunosurveillance, and induction of chemoresistance [12] (Figure 1). Their role in both local and systemic cell–cell communication is exerted through the transfer of functional biomolecules, including miRNAs, other non-coding RNAs, and proteins, to recipient cells. 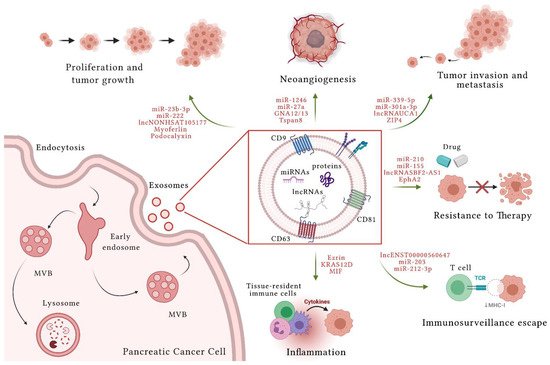 Figure 1. Role of extracellular vesicles (EV) in pancreatic cancer. Exosomes are subset of EVs. They originate after the fusion of multivesicular bodies (MVBs) with plasma membrane and the release of ILVs (Intraluminal vesicles) into extracellular space. The content of EVs determines their functions. EVs originated from pancreatic cancer (PC) cells deliver different functional biomolecules, such as micro RNAs (miRNAs), long noncoding RNAs (lncRNAs), and several proteins. In the figure examples of EV content are indicated. EVs play a pivotal role in PC progression. In fact, they are involved in proliferation and tumor growth, in the mechanisms of angiogenesis, in invasion and metastasis processes, in the induction of chemoresistance, in the escape of cancer immunosuppression, and in inflammation that creates a conducive microenvironment to cancer progression. Created with BioRender.com accessed on 20 May 2021.

Interactions of miRNAs with 5′-UTRs, coding sequences and gene promoters have also been reported [13]. Profiling of RNAs in the circulation has shown that miRNAs are involved in many pathological cancer processes [14][15]. Valadi et al. described for the first time miRNAs of EVs demonstrating that mast cells transport miRNAs, mRNAs, and other molecules to target cells [16]. Reports have identified EV miRNAs as novel bloodborne biomarkers for the early diagnosis of PC in light of their roles in biological processes such as cell proliferation, apoptosis, and differentiation [17][18]. Unlike circulating miRNAs, a key characteristic of EVs is the possibility to shield their cargo, in particular RNA, from RNase degradation abundantly presents in body fluids and in the TME [19]. The expression profile of intracellular miRNAs is different from miRNAs in EVs as a result of strict sorting mechanisms [20].

In general, miRNAs may play a dual role in carcinogenesis on the basis of the role of the target mRNAs in the tumor initiation process. Indeed, it is possible to distinguish oncosuppressor miRNA, when its downregulation increases the activity of a corresponding oncogene, and oncogenic miRNA (also termed oncomiRs), when its upregulation results in a persistent inhibition of the target tumor suppressor gene. Thus, alterations in the regulation of specific miRNAs determine their contribution to cancer development [21][22].

In general, a dysregulation of lncRNAs has been described in several types of cancers and, in particular, abnormal regulation of miRNAs and lncRNAs holds a pivotal role in contributing to various hallmarks in PC [23][24][25]. In line with this, it was demonstrated that lncRNAs interacting with DNA, RNA and proteins are involved in PC pathogenesis influencing the tumorigenesis pathway at transcriptional, post transcriptional, and epigenetic levels [26].

A recent study has highlighted the importance of lncRNA also in the release of EVs in PC. In fact, lncRNA PVT1 is able to induce increase of EV secretion in PC cells by acting on YKT6 v-SNARE homolog (YKT6), Ras-related in brain 7 protein (RAB7), and vesicle-associated membrane protein 3 (VAMP3) [27].

Besides miRNAs and lncRNAs, several studies indicate that EVs also contain numerous proteins with multiple roles in the progression of PC. In fact, small EVs (sEVs) released by PC cells may act as an initiator of malignant transformation, ability that sEVs secreted by normal pancreatic cells do not possess [28]. In addition, some proteins are uniquely included into sEVs secreted from PC cells (Capan-2, MIA PaCa-2, and Panc-1), others are uniquely present in sEVs of normal pancreatic cells, and other proteins are more abundant in vesicles derived from cancer cells compared to the normal counterpart [29]. To the first category belong Guanine Nucleotide-Binding Protein Alpha-12 (GNA12) and GNA13 [29]. They can stimulate cell growth through activation of Ras, Rac, Rho, CDC42 and their downstream pathways [30][31][32], which have been found to be hyperactivated in several cancers, contributing to tumor growth, angiogenesis, EMT, migration, and invasion [33]. Instead, protein members of RNA polymerase III with a role in immune response, such as RNA Polymerase 3 subunit B (POLR3B), POLR3A, POLR3D, and POLR3E have been found only in sEVs of normal pancreatic cells [29][34]. Among proteins more present in sEVs released by PC cells, RAB and ESCRT have been found [29] and their greater presence in sEVs of PC cells could be explained considering that cancer cells release more EVs than normal cells [35][36][37].

In the path to PC, acute and chronic pancreatitis may represent intermediate stages. Acute pancreatitis is characterized by inflammatory-driven auto-digestion of the pancreatic tissue that can evolve to edema, hemorrhage, and apoptosis or necrosis of parenchymal cells [38]. CP, instead, is a consequence of diseases characterized by pro-inflammatory pancreatic secretion and fibrosis with a higher risk of evolution to PC [39].

Due to their ability to shuttle intracellular components and biomolecules—including cytokines—among close and distant targets, EVs are now being investigated as alleged mediators in the development of pancreatic inflammation and carcinogenesis [9].

Higher concentrations of circulating EVs with a specific proteomic profile were identified in a rat model of taurocholate-induced acute pancreatitis compared with control rodents [40]. Immunofluorescence experiments on these animal models revealed that PKH26 fluorescent-labeled EVs originated mainly from the liver, which retains most of the EVs from the peritoneal cavity, and immune cells [40]. These vesicles are able to trigger a series of inflammatory reactions that ultimately lead to fibrosis and calcification of the parenchymal pancreatic tissue [40]. In vitro experiments have also shown that these vesicles can break through the lung alveolar endothelial barrier and be internalized by macrophages. Here, EVs activate resident macrophages by inducing their polarization from M2 to M1 and leading to a pro-inflammatory phenotype [40]. In this setting, multi-organ damage mediated by EVs originating in experimental acute pancreatitis and accompanied by overt inflammation may represent an EV-mediated systemic complication of pancreatitis [40]. In mouse models of acute pancreatitis, circulating EVs have also been shown to contribute to pancreatitis-associated lung injury by triggering an innate inflammatory response via the activation of the nucleotide binding oligomerization domain (NOD)-like receptor protein 3 (NLRP3) and pyroptosis of alveolar macrophages [41]. Of note, EVs derived from the plasma of rats with taurocholate-induced acute pancreatitis showed a much higher proinflammatory power on macrophages compared with those isolated from the ascitic fluid of these animals [42]. This characteristic was ascribed to EV enrichment with miRNAs having specific proinflammatory properties [42].

4. Extracellular Vesicles and Tumor Microenvironment: From CAFs to PC

Extensive desmoplasia is a hallmark characteristic of PC [43][44]. Indeed, the majority of pancreatic tumor bulk consists of fibroblasts [43][44]. A large body of evidence suggested that among fibroblasts, CAFs contribute to the PC phenotype of chemoresistance, invasion, metastasis, and immune tolerance [45]. Furthermore, the secretion of several molecules leading to highly fibrous tumors and to tumor growth is ascribable to CAFs [46][47][48].

The importance of CAFs and their EV secretion was underlined by the possibility to use them as a target of PC therapy. To this purpose, it was demonstrated that CAF treatment with calcitriol, vitamin D active type is able to induce signaling mediated by vitamin D receptor (VDR) and consequent downregulation of miR-10a-5p in EVs from CAFs and also in EV-recipient PC cells [49]. This study provides evidence that acting on miR-10a-5p levels by VDR activation may have an antitumoral effect and may improve the therapeutic response by prompting stromal remodeling [50].

EVs play a key role in PC cancer progression: (i) ability to proliferate; (ii) capability to induce cancer mass angiogenesis; (iii) ability to invade TME and metastasize in ectopic sites distal from the primary tumor; (iv) chemoresistance; (v) ability to elude immunosurveillance; and (vi) ability to create an inflammatory contest. The importance in detecting and analyzing cancer-specific EV cargos in biological fluids from cancer patients has emerged in recent years and is referred to as liquid biopsy. Given the minimally invasiveness of blood analyses, the liquid biopsy allows to easily extract information from the tumor in real time and can be repeated over time [5]. Difficulties in early diagnosis and in curative surgical resection make PC one of the most aggressive and deadly tumors. For these reasons, the identification of PC diagnostic and prognostic markers is a major research focus. The characterization of EV content and function in PC will allow novel biomarkers to be identified for diagnostic and prognostication purposes, and could also guide the development of innovative therapeutic approaches.