Gums are known to be pathological products generated after plant injuries or due to unfavorable conditions (e.g., drought) through the breakdown of cell walls (extracellular formation; gummosis). Polysaccharide gums are ones of the most abundant raw materials in nature. Besides being renewable sources, they are easily accessible, relatively affordable, non-toxic, and environmentally friendly, causing their worldwide usage from the food industry to health care systems. Among different well-characterized gums, gum tragacanth (GT) is recognized as a versatile material in biomedicine. Generally, GT, also known as Katira, is sourced from Central Asia and Eastern countries, and Iran is the largest producer and exporter of this natural gum [1][2].
Structurally, there are two general types of GT, ribbon (the best grades) and flake (or harmony). After collection, Iranian tragacanth ribbons are sorted into five grades, while flakes are provided in seven different grades [3][4]. Based on the literature, physico-chemical properties and compositional variations of GT depend on its sources, i.e., different types of Astragalus species [5]. Astragalus gummifer has been previously the primary source of GT, while Astragalus microcephalus is currently considered as the major source [6]. Other valuable sources to supply GT are Astragalus gummifer Labill., Astragalus verus Olivier, Astragalus microcephalus Willd., Astragalus brachycalyx Fisch. ex Boiss., Astragalus myriacanthus Boiss., Astragalus echidna Bunge and Astragalus kurdicus Boiss [7].
GT has been found a useful plant-derived molecule in a wide range of healthcare-related applications, such as lotions applied for external applications (hair and hand creams) [8][9]. Due to its remarkable stability in wide ranges of pH and temperatures, GT is commonly used as an emulsifier in food, drugs and related industries with exceptionally long shelf life [10]. For instance, GT is being applied as an emulsifying/suspending agent in pharmacological industries. Moreover, GT has been historically used as an analgesic as well as a conventional therapy in the curing of cough and lip fissures [8]. In modern medicine concepts, GT could be utilized for preparing tissue-engineered (TE) constructs (scaffolds) as well as in the fabrication of drug delivery platforms [11] thanks to its excellent inherent features, including non-mutagenicity, non-teratogenicity, non-immunogenicity, and non-toxicity [12]. Accordingly, GT has been generally recognized as a safe (GRAS) substance by the Food and Drug Administration (FDA). Degradability in the living systems also makes GT a highly interesting material in tissue engineering and regenerative medicine strategies [13]. Therefore, several experimental studies can take benefit from GT for fabricating wound dressings [14][15]. In addition to soft tissue healing applications, GT has been using in the reconstruction of hard tissues either alone or embedded within composites [16][17]. For instance, Haeri et al. in 2017 reported that GT could serve as a suitable substrate for promoting the adhesion, proliferation, and osteogenic differentiation of adipose-derived mesenchymal stem cells (Ad-MSCs) [16].

In recent years, plant-derived polymers have evoked tremendous interest in the pharmaceutical setting, such as drug delivery approaches [18]. GT possesses the necessary criteria of an appropriate drug release vehicle due to its excellent biocompatibility, biodegradability, and the potential of loading wide ranges of natural and synthetic bioactive molecules [19]. Accordingly, a variety of chemicals and drugs were loaded into different GT-based constructs (e.g., nanogels, hydrogels, and nanofibers) and relevant composites to be delivered to desirable sites via oral or other administration routes [20]. Antibacterial, anti-cancer, anti-inflammatory, and antioxidant agents are among the most delivered therapeutics by GT and its composites [21][22][23]. For antibacterial applications, GT in the form of hydrogels and nanogels has been widely used as a delivery platform for organic (e.g., plant extracts) and inorganic (silver nanoparticles) substances [24][25]. As an illustration, Rao et al. added silver nanoparticles to GT hydrogels to impart the antibacterial ability to the construct [26]. They prepared GT/acrylamide (AAm) hydrogels via the standard redox polymerization method and then synthesized silver nanoparticles (Ag-NPs) in GT hydrogels (Figure 2). The results showed an increment in the swelling ratio of the hydrogels along with increasing the amount of GT. Moreover, embedding Ag-NPs into the hydrogels caused a small increase in the swelling capacity in comparison to pure counterparts. As shown in Figure 2, the saturation of all the hydrogels happened within 3 days. The authors reported that this composite hydrogel, being able to effectively inhibit Gram-positive (Bacillus subtilis (B. subtilis)) and Gram-negative bacteria (Escherichia coli (E. coli)), could be a suitable candidate for wound healing as well as water purification applications. 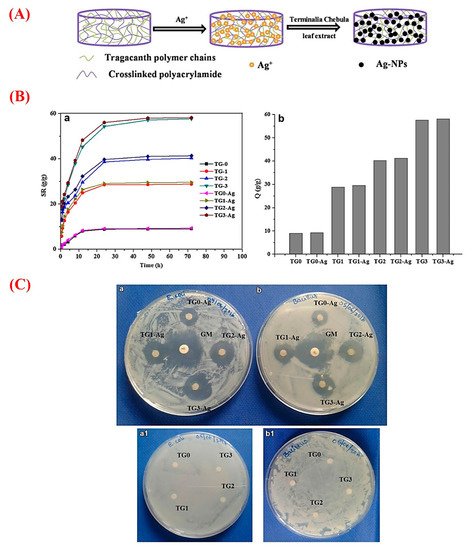 Figure 2. (A) Schematic representation of the formation of silver nanoparticles (Ag-NPs) in gum tragacanth (TG) hydrogel networks. (B) Graphs a and b exhibiting swelling and equilibrium swelling ratio Q (g/g) of the TG hydrogels (TG0, TG1, TG2, and TG3) and their Ag-NPs embedded counterparts (TG0-Ag, TG1-Ag, TG2-Ag, and TG3-Ag), respectively. (C) The results of the antibacterial activity of the Ag-NPs containing TG0, TG1 TG2, and TG3 hydrogels and the pristine TG hydrogels on (a/a1) E. coli, and (b/b1) B. subtilis [Gentamicin (GM) antibiotic is as the positive control]. Note: TG0, TG1, TG2, and TG3 contain 0, 100, 200, and 400 mg of GT. Reproduced with permission from [26], Copyright 2017, Springer Nature.
For delivery of the anti-cancer drug cisplatin (CP), composite nanogels (size = 58–70 nm) of GT and lecithin (LC) were previously proposed in which the drug was embedded in the GT core and remained covered by LC as shell [27]. It has been reported that adding GT to polymeric drug delivery systems may improve their physico-mechanical properties and sustained release profile. In this regard, Apoorva et al. incorporated GT into pH-sensitive sodium alginate (SA) hydrogels and evaluated its effects on the release profile of the loaded drug, i.e., phenolic compounds extracted from Basella sps [28]. Indeed, they added GT to SA to overcome one of the limitations of pure alginate beads, i.e., the low entrapment efficiency. A series of SA-GT beads were prepared using an ionic gelation method in which different ratios of SA and GT (AT0 = only SA, AT11 = 1:1, AT12 = 1:2, and AT21 = 2:1) were poured into distilled water. The resulted droplets were mixed with calcium chloride hardening solution (2% w/v) to make the beads with a size ranging from 638 μm to 798 μm. The obtained results revealed higher swelling behavior of SA formulations in simulated intestinal fluid (SIF) after the incorporation of increasing GT content. This could be due to the hydrophilic nature (i.e., OH and COOH groups) of GT that interact with water molecules leading to promoted swelling behavior [29]. A significantly higher encapsulation efficiency (ranging from 62% to 78%) was also documented for the phenolic compounds in the SA-GT beads. This might be affected by large vacant space between the polymeric chains to incorporate phenolic agents inside the loop structures and subsequent hydrogen bonds formation with the OH groups of GT. In addition, the sequential and controlled release of the phenolics in the simulated intestinal environment (SIE) was recorded in the groups AT21, AT11, and AT12, leading to the high absorption (99%) of the extracts in an in vitro model of the small intestine. GT nanofibers were recently produced by using a sonochemical/microemulsion method for the controlled delivery of peppermint oil [30]. The prepared GT nanofibers, having one-dimensional shape (58 nm thickness and 1 µm length), showed the ability to allow the controlled release of peppermint oil (92.38% of the drug after 18 h), rendering antibacterial activities against E. coli and S. aureus without no significant toxicity over human fibroblast cells. The usefulness of GT nanofibers in drug delivery approaches is also documented elsewhere [31].

Tissue engineering and regenerative medicine (TERM) is a multidisciplinary field, which comprises molecular and cellular biology, chemistry, and materials science with the aim of regenerating a damaged tissue both structurally and functionally. The extracellular matrix (ECM) is recognized as a key player in the regenerative process of a broad range of human tissues as to its ability to provide a suitable biological substrate for improving cell adhesion, proliferation, migration, and differentiation. As the ECM is mainly composed of proteoglycans, glycosaminoglycans, glycoproteins, and glycolipids, polysaccharides have been considered as promising materials for generating biomimetic scaffolds [32][33][34][35]. Natural polysaccharides (e.g., GT and alginates) are being extensively used in TERM strategies thanks to their biocompatibility and biodegradability, structural and functional diversity, as well as their availability and renewability as compared to synthetic polymers [36]. Still, some drawbacks are mentioned with natural polysaccharides, such as their rapid degradation that can endanger the mechanical and biological properties of the scaffold. Current research has focused on these limitations and brought innovative approaches, including their reinforcement by copolymerization with other biomaterials and physicochemical crosslinking [37]. It is worth mentioning that improved physico-mechanical properties (e.g., structural stability) of polysaccharide-based scaffolds may also lead to an accelerated tissue regeneration [38].
It is possible to fabricate several tissue-engineered constructs containing GT, which could be useful in the acceleration of the tissue healing process. In the following sections, we summarize the potential applications of different GT-containing structures (e.g., nanofibers, hydrogels) in the concept of TERM.