Subjects: Others
View times: 3
Submitted by:

Cell wall is the outermost structure of the plant pathogenic fungi and bacteria, which plays important role in maintaining cell shape and integrity. It also maintains normal metabolism, ion exchange, and osmotic pressure in cells [1]. Some marine compounds can inhibit the formation of microbial cell walls, thus suppress the growth or kill the pathogens. For instance, Chakraborty et al. isolated compounds 13–17 from a marine bacterium B. subtilis 109GGC020. Compounds 13–17 inhibit cell wall synthesis of M. oryzae to inhibit its growth [2]. Marine natural products can destroy structure of the fungal cell wall component glucosamine to inhibit the cell wall synthesis and growth. For example, microalgal phenolic extracts (MPE) were isolated from marine microalgae Nannochloropsis sp. and Spirulina sp., which can destroy the glucosamine structure of F. graminearum CQ244 and reduce glucosamine production by 15% [3]. Chitin is another fungal cell wall key component, which can be degraded by chitinase [4]. A chitinase was identified from the marine bacterium B. pumilus JUBCH08, which was proved to degrade the cell wall of F. oxysporum and inhibit its growth [5].

The cell membrane is a lipid bilayer semi-permeable membrane, which controls the two-way flow of substances inside and outside the cell of the plant pathogens. The microbial cell membrane is another most common target of marine natural compounds. For example, antifungal ethyl acetate extract from marine-derived Streptomyces sp. AMA49 can destroy the cell membrane of M. oryzae to suppress fungal growth [6]. A series of other marine-derived natural compounds can also achieve their antibacterial effects by destroying the cell membrane of different plant pathogens [7][8][9][10][11][12]. Compound 9 isolated from B. velezensis 11-5 can selectively bind with phospholipids in the cell membrane of M. oryzae, thus affecting the membrane structure [13]. The microalgal phenolic extracts, which are isolated from Nanochoropsis and Spirulina, can combine with ergosterol on the membrane (MPE) of F. graminearum cells to elevate plasma membrane permeability and lead to the leakage of proteins, nucleotides, amino acids, sugars, and salts, therefore leading to the death of fungi [14].

Marine natural compounds can also target the respiratory electron transport system of plant pathogens to inhibit their respiration, through which they can inhibit the growth of pathogens. For example, compound 26 (Figure 1) isolated from marine Myxobacterium can breaking the electron flow by targeting the cytochrome b-c1 segment [20], and therefore inhibits the growth of plant pathogens. 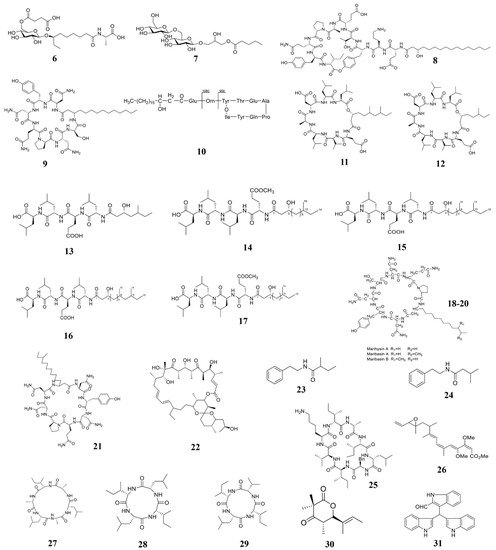 The cytoskeleton also plays important roles for fungal development and infection processes [21], whose components could be bound by the marine compounds and inhibit fungal growth and infection. For instance, the marine organisms derived compounds 46–48 (Figure 2) can inhibit the growth of Colletotrichum species and B. cinerea [22], the mechanism is that compounds 46–48 target the fungal β-tubulin proteins and subsequently suppress cell division [22]. 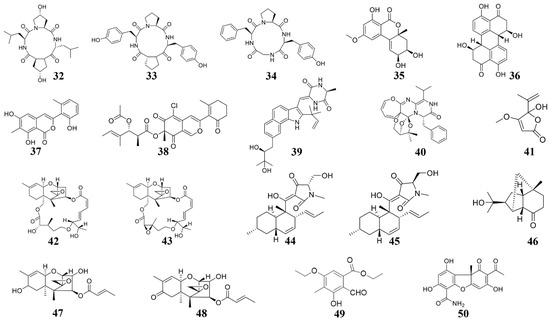 QS system can help bacteria to monitor the quantity change of itself or other bacteria in the surrounding environment, according to the concentration change of specific signal molecule autoinducer. When the signal molecule reaches a certain concentration threshold, it can start the expression of related genes in the bacteria to adapt to the environmental changes. When the QS system of bacteria is blocked, bacteria cannot communicate with the surrounding environment and failed to infect the host plant. Interestingly, some marine natural compounds can also target and interrupt the bacterial QS system to prevent infection of the bacterial pathogens [23][24]. For example, 2-methyl-n-(2’-phenylethyl)-butanamide and 3-methyl-n-(2’-phenylethyl)-butanamide, two marine-derived compounds, can destroy the QS system of rice pathogenic bacterium B. glumae (ATCC 333,617), therefore interrupt virulence feature production, including proteases, toxins, as well as some other immune-evasion factors [25]. In this situation, the QS signal is blocked by the marine compounds, and the bacteria fail to attack the host.

7. Induction of the Plant Immune System