Etiologically, the skin wounds could be classified as acute, chronic, or malignant wounds. In general, an ordered and normal wound healing process happens after acute wounds. On the contrary, chronic wounds are characterized by prolonged inflammatory phase, sustained infection, and the generation of drug-resistance microbial biofilms, leading to an impaired wound healing cascade.

Generally, skin wound healing comprises four overlapping phases with a well-orchestrated interaction of specialized cells, bioactive molecules, and extracellular matrix (ECM) components. In the first phase, the so-called hemostasis, the formed fibrin clot provides a temporary scaffold for cellular attachment and migration [1]. In addition, platelets produce pro-inflammatory cytokines (e.g., PDGF and TGF-β) that contribute to the inflammatory phase. The inflammatory phase is the second phase in which neutrophils are infiltrated and support reinforcing immune response through releasing TNF-α, IL-1β, and IL-6. Furthermore, monocytes migrate to the wound bed and differentiate into macrophages that serve as phagocytes and release bioactive molecules including IL-1, PDGF, TGF-α, TGF-β, FGF, IGF-1, and VEGF [2]. The third phase, i.e., proliferation, is remarked by re-epithelialization, angiogenesis, and granulation tissue formation. In the last phase, i.e., remodeling, the residing collagen type Ⅲ in granulation tissue is replaced by bundles of collagen type Ⅰ that result in scar tissue formation and subsequently enhance the tensile strength of ECM [3].
Etiologically, the skin wounds could be classified as acute, chronic, or malignant wounds. In general, an ordered and normal wound healing process happens after acute wounds [4]. On the contrary, chronic wounds are characterized by prolonged inflammatory phase [5], sustained infection [6], and the generation of drug-resistance microbial biofilms [7], leading to an impaired wound healing cascade. In the case of malignant lesions, the edges of wounds are constantly expanded because of the cell migration inward and outward of the wounds, which results in tumor proliferation as well as its invasion into the adjacent tissues [8].
It is well-known that successful and efficient wound healing requires improved angiogenesis, re-epithelialization, and less fibrous and scar tissue formation. Hence, numerous studies have been focused on developing innovative wound substitutes and dressings.

The therapeutic multifunctionality of MBGs makes them highly interesting biomaterials to be applied in wound healing and skin tissue regeneration (Table 1). Acute wounds normally heal in a very orderly and efficient manner characterized by four distinct but overlapping phases: hemostasis, inflammation, proliferation, and remodeling. MBGs can be engineered to improve wound healing and skin regeneration through stimulating angiogenesis and inhibiting bacterial formation on the wound site. For example, Cu-containing MBGs were utilized in nanofibrillated cellulose matrix (NFC) composite aerogels to release Cu2+ ions for its angiogenic effect on promoting wound healing and its antibacterial effect as well [9]. A 3D fibrin spheroid assay showed that NFC: MBGSi75Cu5 (10:1) aerogel significantly induced sprouting of human umbilical vein endothelial cells (HUVECs) and enhanced the expressions of vimentin and fibronectin in the HUVEC spheroid compared to control groups (Figure 1). This suggested that NFC: MBGSi75Cu5 (10:1) aerogel can promote fibroblast–endothelial cell interaction and ECM production, similar to the in vivo fibrin clot during the wound healing process. 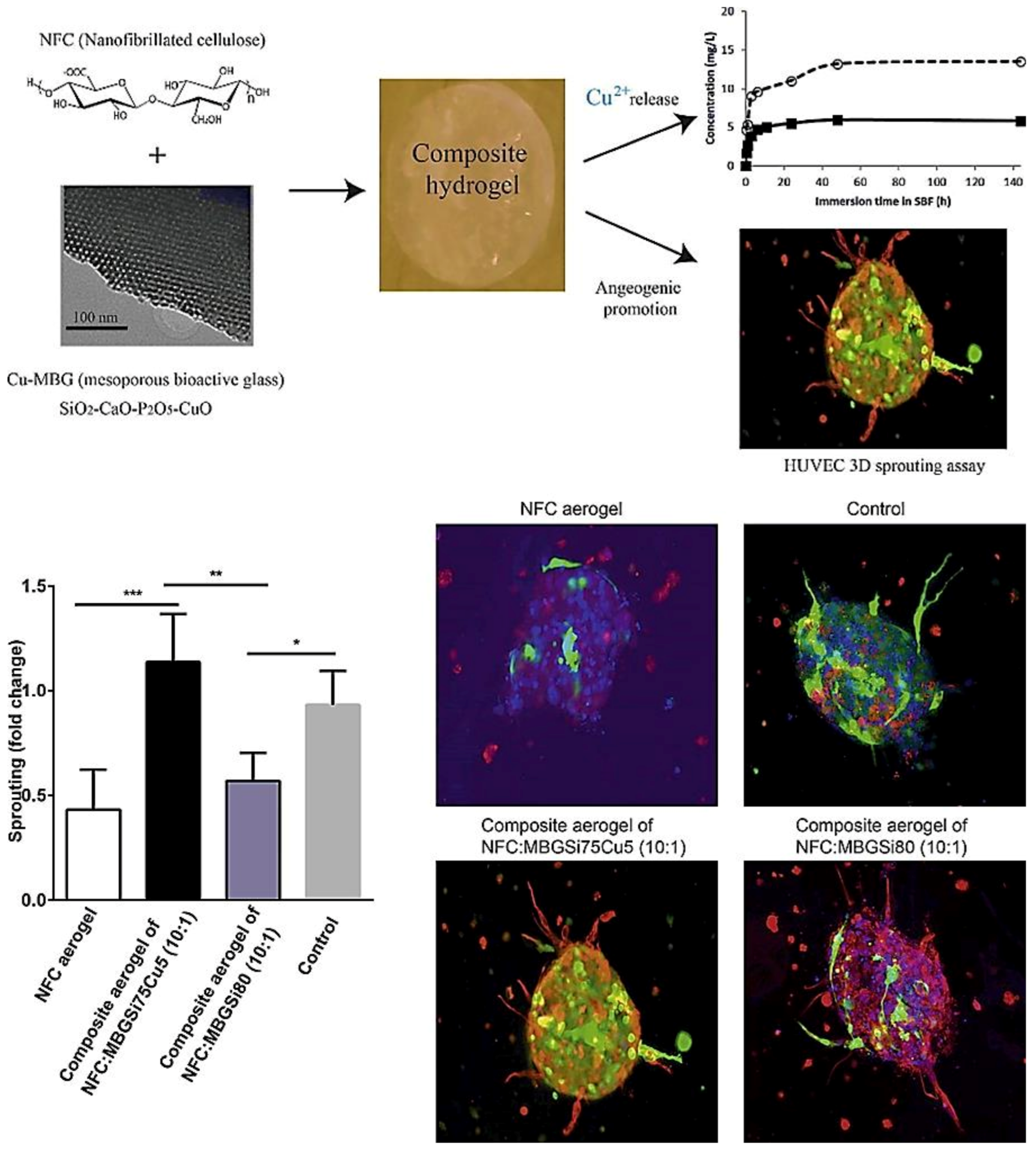 A lot of experimental studies carried out over the last decade have convincingly proved that mesoporous silicate biomaterials—MSNs and MBGs—are suitable for applications not only in contact with bone but also in the fields of wound management and skin tissue engineering. Of course, there is an obvious mismatch between the physico-mechanical properties of these hard and rigid inorganic materials and those of soft tissues; hence, in most cases, they need to be embedded in polymeric matrices to obtain softer composites. This approach also carries the advantage of making the topical application of these materials particularly easy, which is so common for treating skin or superficial injuries.
MSNs MBGs exhibit an exceptional conformational versatility as they can be produced according to a variety of structures and morphologies (e.g., external geometry, mesopore size, and, in general, textural properties): therefore, a “universal” criterion of choice cannot be defined, but the type, shape, size, and dosage of these materials should be carefully selected depending on the specific application.
MSNs and MBGs have in common the property of acting as drug delivery vehicles: textural characteristics (primarily mesopore size) can be properly tailored depending on the synthesis process, the parameters of which can be selected on the basis of the specific biomolecule to be hosted. As compared to MSNs, MBGs have the additional extra-functionality of acting as vehicles for the release of therapeutic ions as well. In principle, the synergy between the release of drugs/growth factors from the mesopores and ions upon material dissolution can lead to potentiated effects and better therapy; however, the interactions between these two agents, including mutual inhibitory and side effects, should be carefully evaluated. This is a highly fascinating field of research, but, at present, there is a lack of specific regulations and protocols, also in terms of ad hoc in vitro and in vivo models, to study such synergistic interactions.
The release of ions and biomolecules can be finely modulated if the walls of mesopores are properly functionalized and/or the mesoporous materials are embedded in stimuli-responsive polymeric matrices: in both cases, mesopores behave as “intelligent gates” that can be selectively opened or closed depending on the conditions of the environment (e.g., bloodstream, intact surface of the skin, injured skin/wound, etc.) These smart biomaterials also carry the added value of minimizing toxicity in non-target tissues, allowing localization of the release and associated therapeutic actions only when the carrier reaches the wound region, which may exhibit peculiar biochemical conditions, e.g., pH, that are different as compared to those of intact skin. Indeed, a wise, safe, and reproducible exploitation of this therapeutic approach requires the understanding and selection of the most suitable biochemical stimuli that can activate such intelligent MSN-/MBG-based systems.