Paleoparasitology aims to study the natural history of parasitic organisms through the recovery of their preserved remains in archaeological, paleontological, paleoecological, and medical contexts.

Paleoparasitology is a discipline of bioarchaeology that studies human and animal parasites and their evolution through time. It is at the frontier between biological sciences and the humanities, and aims to provide valuable clues about the lifestyles of former populations. Consequently, this approach is highly integrative, overlapping different but consistent scientific fields, such as archaeological sciences, evolutionary sciences, or medical sciences.

Paleopathologies, hygiene, food habits, or waste management are among topics that can be addressed by paleoparasitology. In a broader perspective, it allows to better understand the history of parasites and the evolution of the host-pathogen relationships. The intrinsic diversity of this discipline is also well illustrated by its materials and methods, as it includes respectively fossil and subfossil body parts, coprolites and paleofeces, sediments, microscopy, immunology, or molecular biology. Finally, paleoparasitology itself, but also as a result of its history as a scientific field, is closely tied to other disciplines interested in diseases throughout time, their signs and their causative agents, and complement each other, such as paleopathology, paleomicrobiology, or archaeoentomology [1][2][3][4][5].

Not only paleosciences but also modern parasitology, provide the theoretical framework for paleoparasitology as a scientific field. In this way, interpretations of paleoenvironmental reconstructions or parasite-human relationships depend on concepts and definitions from modern parasitology.

Parasitism is a difficult notion to define as its precise shapes are unclear. Meanwhile, a minimal and operative definition might characterize parasites as organisms living at least part of their lives in or on another organism. The former (the parasite) depends upon the latter (the host) to maintain its life cycle and the beneficial relationship for the parasite is at least periodically detrimental to the host. This definition ties together those of Leuckart [6] and Brumpt [7]. According to this definition, many organisms appear to be parasitic. Price [8] estimated that 70% of all living species were parasites, while Timm and Clauson’s estimation [9] was 50%. If we follow Poulin and Morand [10] and consider that each living species hosts at least one specific parasitic species, then we must indeed admit that at least half of all living species are parasites [11]. And we do not know of any living species free of parasites. Consequently, parasitism, which is more an ecological concept than a taxonomic one, emerged in many different phyla through time [12]. Several of them may even consist mostly of parasitic species, such as Apicomplexa or Acanthocephala. On the contrary, other groups never gave birth to parasitic species, e.g., primates. Meanwhile, all species are confronted with parasites in one way or another [13].

In the case of gastrointestinal parasites, macroremains correspond to the body parts of adult worms or larvae. These macroremains, like other soft tissues, undergo rapid degradation and their preservation requires extreme dry, cold, or humid environments, or conditions favoring mineralization. Observations of digestive parasite macroremains are rare, and only five cases are known today.

The second category of markers includes eggs produced by parasitic worms (or helminths) during reproduction, as well as cysts of parasitic unicellular organisms. Helminth eggs are ovoid elements whose size varies between 30 and 160 µm long and 15 to 100 µm wide. The shell of these eggs contains chitin (a polysaccharide), keratin (a fibrous protein), and sclerotin (a tanned protein), alone or associated with each other. These molecules give them great resistance to taphonomic processes.

Among the parasite-specific biomolecules that have already been identified in archaeological material, antigens and nucleic acids (ancient DNA) are the most represented. Parasites possess a set of antigens, some of which are specific, that can be detected by adapted tools. In the last ten years, immunology has been used to detect paleoantigens of parasitic protozoa, thus increasing the list of detectable parasites in ancient contexts. As the forms of dissemination of protozoa are fragile, immunology is an effective tool for the detection of these parasites.

3. From the Field to the Lab

The sampling strategy in the field is simple and samples are taken by the archaeologist or the anthropologist during the excavation. All structures and areas where organic remains (particularly fecal matter and intestinal residues) tend to accumulate can be targeted. These structures can be divided into two categories: 1/Human and other animal skeletons and mummies. 2/Accumulation structures, i.e., latrines, pits, sewers, or soils with accumulated organic matter. For skeleton sampling, the main samples should be taken around the pelvic region of the body, precisely just under the hip bones, the last vertebrae, and the femurs. Control samples are taken under the skull and/or the feet (Figure 1A). For accumulation structures such as latrines or pits, the sampling strategy depends on the type of filling. In case of a homogenous filling, samples should be taken regularly from the top to the bottom with a minimum of three samples. For fillings showing SU, samples should be taken from each SU (Figure 1B). In these two cases, control samples should be taken in contemporary layers outside the structure. Sediment core sampling is also possible. These approaches are particularly suitable for questions relating to variations in the function of the structure throughout time. In the case of soil sampling, for example in occupation layers, a horizontal systematic sampling strategy can be chosen (one sample per square meter for example), or a sampling strategy covering a large part of the layer in the excavated zone, as shown in Figure 1C. 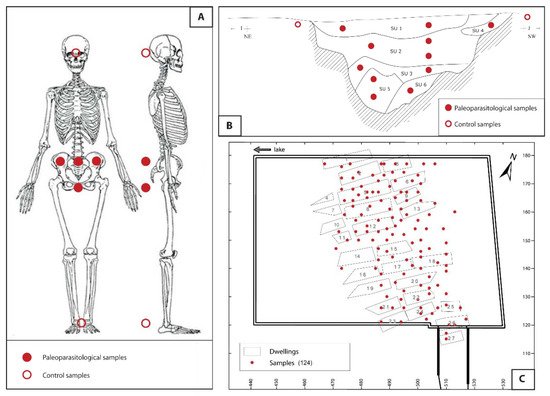 Figure 1. Various sampling strategies depending on various archaeological context: (A) sampling on skeletons; (B) sampling in hollowed structures as latrines or pits; (C) sampling in occupation layers (example of Zurich Parkhaus Opera, Switzerland).

After more than a century of development and data acquisition, paleoparasitology has become a recognized bioarchaeological discipline, helping to answer questions from archaeology, and developing its own issues related to the history of parasites and the evolution of host/parasite relationships. Methodological advances and the increasing use of new investigative techniques are promising, especially concerning the detection and identification of parasites, two crucial points on which scientists interested in ancient parasites must work. In this perspective, the use of molecular biology must continue and combined microscopy/immunology/molecular biology approaches must become increasingly widespread to obtain more complete images of parasite diversity and evolution at different periods of history.

The actions carried out so far through archaeological training or data dissemination must continue so that paleoparasitology develops further and occupies a more important place in the archaeological community. Specialists must continue efforts to enhance the integration of data in archaeology. These steps will perhaps make it possible to systematize paleoparasitological studies in certain contexts (latrines, burials…) in the same way as other disciplines such as archaeozoology and archaeobotany.