Aeromonas a Gram-negative bacillus, positive for oxidase and catalase tests, a glucose fermenter, and it is resistant to vibriostatic O/129 (2,4-diamino-6,7-diisopropylpteridine). In humans, it can cause intestinal and extra-intestinal infections. It is important in the medical area, mainly in patients with diarrhea, or with infections in the skin and soft tissue; moreover, it can cause bacteremia, which progresses to sepsis, or endocarditis.

Colistin is a lipopeptide antibiotic from the group of polymyxins. It has a cyclic peptide chain that is linked to a fatty acid. Colistin is used in the medical field, since it is an extended-spectrum antimicrobial, and it is used as a last line of treatment in human infections that are caused by Gram-negative bacilli [1]. Until 2016, resistance to colistin was reported in some genera of bacteria intrinsically and contained in the bacterial genophore, until the presence of a gene called mcr, present in a plasmid that confers resistance to this antimicrobial, was detected in an Escherichia coli strain [2]. After this report, the number of isolates of various origins with mcr genes and a colistin resistance phenotype was increased; in addition, it was found that resistance to this molecule could be transferred horizontally [3][4].
The use of colistin as a treatment for infections increased after the appearance of multidrug resistance phenotypes (MDR) in Gram-negative bacilli and the appearance of carbapenemase-producing enterobacteria type KPC (Klebsiella pneumoniae carbapenemase) or NDM (New Delhi metallo-β-lactamase), in addition to Gram-negative bacilli classified as XDR (extensively drug resistant) that continue to appear, especially in bacteria such as Klebsiella pneumoniae, Pseudomonas aeruginosa, and other Gram-negative bacilli, such as Aeromonas, which is also of medical and veterinary importance and is isolated from environmental samples [5][6].
Aeromonas is a Gram-negative bacillus, positive for oxidase and catalase tests, a glucose fermenter, and it is resistant to vibriostatic O/129 (2,4-diamino-6,7-diisopropylpteridine) [7]. In humans, it can cause intestinal and extra-intestinal infections. It is important in the medical area, mainly in patients with diarrhea, or with infections in the skin and soft tissue; moreover, it can cause bacteremia, which progresses to sepsis, or endocarditis [8][9].
The genus Aeromonas is widely distributed in diverse ecosystems; however, it is a bacterium native to aquatic systems, hence the largest number of isolates are from water. Isolates have been obtained from drinking water, wastewater, bottled water, seawater, and deep and surface water samples. Food isolates have been obtained from vegetables, fruits, pork, poultry, and beef, as well as seafood and fish. In animals, it is considered a pathogen, especially in fish, in which it can cause furunculosis, ulcers, and hemorrhages, among other diseases. This pathogen has also been isolated from infections in rabbits, dogs, cats, chickens, horses, and crustaceans [8][9].

The molecular basis of antimicrobial resistance in Aeromonas spp., has been widely studied, but their importance in the hospital area as a cause of outbreaks is not fully established. Likewise, reports on resistance are varied regarding the origin of isolation and the type of antimicrobials tested in vitro [7]. The Aeromonas resistance profile has not changed significantly; until now, the mechanism of action of inducible chromosomal β-lactamases and carbapenemase expression has been suggested as being the main resistance mechanism for Aeromonas species. Three classes of β-lactamases are recognized in Aeromonas; one of class C cephalosporinase, one of class D penicillinase, and one of class B metallo-β-lactamase (MBL) [9][10].
The occurrence of MDR-type Aeromonas spp., isolates has been increasing. Different authors have suggested that antimicrobial resistance in the clinical setting is closely related to resistance mechanisms detected in environmental isolates [11]. In the genus Aeromonas, the occurrence of MDR strains is equivalent, due to their origin in aquatic environments, which is attributed to the extensive use of antibiotics in aquaculture. Therefore, this environment becomes an ideal setting for the acquisition of these mechanisms of resistance to antimicrobials and other toxic agents [12]. 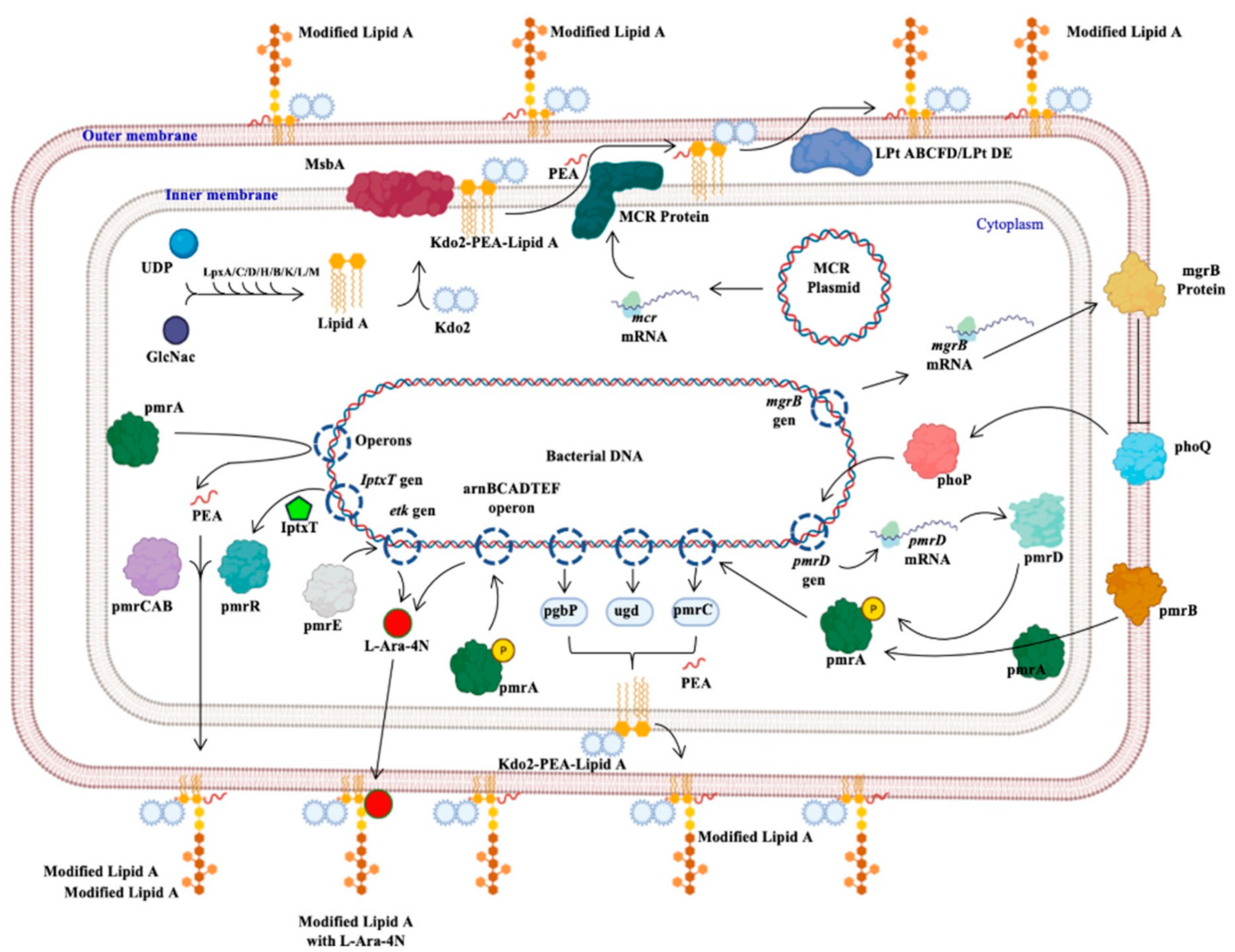 The genus Aeromonas is a bacterium widely distributed in the environment. Its presence in various ecosystems and ability to cause infections in animals and humans makes it a bacterium of interest in the study related to the appearance of strains resistant to antimicrobials. The presence of antimicrobial-resistant isolates from the first line of care, and those of the last alternative, such as colistin, detected in the clinical area, in animals or in the environment, demonstrates that the resistance comes from the exposure of bacteria to antimicrobials in clinical care, but it is also suggested that resistance originates in the environment. In addition, it is important to study Aeromonas isolates with colistin resistance from different sources, and also with the detection of the mcr genes.