The concept of electric springs (ESs) has been proposed as a new solution for stabilizing power grid fed by intermittent renewable energy sources. With a battery or active power source (DC, on the inside), the ESs can provide both active and reactive power compensations. So far, three typical topologies of single-phase ESs have been reported.

The existing way by which power system operates is that power generation depends on the needs of the users. With the increasing capacity of power generated from renewable energy sources (RESs), the total power generation is more and more difficult to predict due to the intermittent nature of RESs, which might result in a mismatch between the load demand and power generation [1][2][3]. The influence of the loads on the power system is becoming more and more noticeable, giving rise to phenomena, such as voltage/current distortion, voltage fluctuation, and frequency flicker [4][5]. Large-scale power grids have a self-regulating ability for voltage fluctuation to a certain degree; instead, small isolated microgrids have weak regulating capabilities. Voltage fluctuation can adversely affect power consumption equipment, and in severe cases, it can damage the critical ones. For example, medical equipment used by hospitals to monitor vital signs of patients have very strict requirements on the operating voltage. Excessive voltage fluctuation may lead to unreliable operation, and sometimes causing a misjudgment by doctors, which may seriously endanger the life of the patients.
In response to the situations depicted above, the concept of electric spring (ES) was initiated by Hui et al. [6]. The ESs can be considered as active suspension systems in the electrical field. Unlike traditional flexible alternating current transmission system (FACTS) devices that primarily handle reactive power compensation, some versions of ES are connected in series, with the non-critical loads (NCLs), to form a smart load (SL), which can automatically adapt to the active power drawn by the NCLs on the basis of the power generation. In the smart grid, this feature plays a constructive role in achieving the new control paradigm that load demand follows power generation. Three versions of ES sequenced as ES-1 [6], ES-2 [7], and ES-3 [8] have been proposed so far. Different from the traditional output-voltage control of power converters, input-voltage control is adopted in the ESs.
There is no energy storage device in the ES-1 [6]. It stabilizes the local mains voltage and adjusts the power of the NCL through a reactive power to balance the power supply and demand, which means it can only provide pure reactive power support and cannot provide active power. The ES-2 uses a battery as an energy storage that allows the ES to output/absorb active power, in addition to the reactive power [7]. In other words, the ES-2 can not only regulate voltage and frequency of the grid, but it also participates in power factor correction and other compensations [9]. The ES-3 is applied to bidirectional AC/DC converters with battery storage units that are not in series with NCLs [8].

For ES-1 without an energy storage unit, the amount of reactive power injected from the power converter is controlled by a reference voltage whose vector is always leading or lagging the current vector by 90° [6][10]. A typical control scheme is depicted in Figure 1 [10].

Figure 1. Control scheme for ES-1 [10].
The double PI closed-loop control, shown in Figure 1, are adopted, to control the DC link voltage and the grid voltage. In order to ensure that there is no active power transferred between the DC link and the AC port of the ES, two coordinated closed-loops are used to regulate the DC link voltage Vdc and also the magnitude of the grid voltage vS. Therefore, the magnitude and phase of the ES voltage are interrelated and inherently controlled, and the degree of control freedom in the method is one. Under this control strategy, the power angle of the SL is not controlled and varies, during the grid voltage regulation process. The main advantage of this control strategy is that its structure is simple, which is easy to implement. Additionally, it does not need detection of the grid voltage and a priori knowledge of the circuit parameters. The shortcomings are also obvious. For example, the decoupling feature is weak, and it can only operate at the pure reactive power compensation mode, which causes an inability to adjust the power angle of the SL and can only stabilize the grid voltage.

Due to the inherent shortcomings of ES-1, most studies are focused on ES-2 and there are ready-made devices in the lab to test the performance of ESs. In a study by Kanakesh et al. [11], ES is connected to an islanded single phase microgrid and simulated with two different control approaches, which are to regulate voltage and also frequency. The test results show that the ES employing just a reactive power compensation and involved in the regulation of voltage needs additional storage for ensuring stability. It has also been shown that ES with a reactive compensation adopted to support frequency regulation, aids in reducing the reserve storage capacity at the cost of poorer voltage regulation. The control method proposed by Mok et al. [12] has been tested on a 2-kW small-scale power system. Simulation and experimental results show that the grid voltage regulation and the power factor correction of the SL can be performed simultaneously and independently without any mutual conflict on one another.

At present, there are few studies on ES-3, most of which have been carried out on ES-2. However, the research on the control of ES-3 is very practical. The reason is that ES-2 needs to be connected in series with the NCL, which is not consistent with the connection type of traditional power system. In contrast, ES-3 avoids such disadvantage. In theory, the power control strategy used by Wang et al. [13] can also be applied to the ES-3. However, the voltage regulation of the CL is limited to a small range.

The various control methods currently available can explain that a single ES plays a role in stabilizing the CL voltage and improving power quality, but the ES design was originally intended to support CL voltage at various installation points of the grid. As shown in Figure 2, the microgrid contains many ESs in a distributed manner. The limited range of NCL voltages will limit the operating range of a single ES. If the control of a large number of ESs can be coordinated, these ESs can provide effective support for the microgrid. In order to implement the plug-and-play functionality of ESs, distributed control strategies are necessary so that they can support the voltage at their location while taking voltage variations along the distribution line into account. In response to this situation, Lee et al. [14] introduced the idea of a droop control in the ES motor and tested it on a distributed line using three 1 kVA ESs, demonstrating that distributed ESs can be coordinated through a droop control to minimize the total reactive power injection. 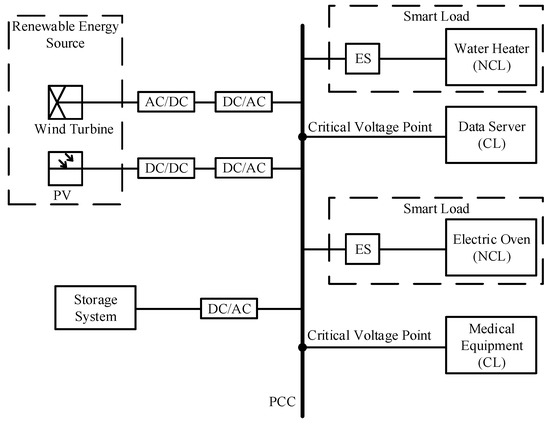