Water-induced channel is one of the main forms of soil erosion in cultivated fields. Channelized erosion is often measured by the volume of the channels. Traditionally, the measurements were conducted with rulers or measuring tapes. However, these traditional methods are generally time- and labor-consuming and can cause soil surface disturbance. Close-range photogrammetry with a Consumer-Grade Camera (CGC-CRP) provides an alternative way of measuring channel volume and can overcome limitations of traditional methods and provides much higher spatial resolution. The optimum setting of the camera is with the image overlapping greater than 70% and with the shooting angle ranging from 60° to 80°. In addition, the channel orientation paralleled to the camera shooting direction is recommended.

Water erosion is one of the main forms of soil erosion in cultivated fields, causing soil loss and crop yield reduction on site and environmental concerns off-site [1][2][3][4]. Water erosion is often shown as morphological changes or resultant morphological features. At the beginning of a water erosion event, erosion can be caused by raindrop splashing and surface runoff (in the form of sheet flow). It results in relatively uniform soil loss across the slope, which is termed sheet erosion. As the runoff depth increases, it starts to concentrate and incise into soil surface to form channels. Channels firstly appear as randomly located parallel small rills. As a rill develops, runoff cuts deeper into the rill bottom and widens the channel. Big channels that can be filled by regular tillage operation are called ephemeral gullies. The locations of these channels are often defined by topography so that they usually reappear at roughly the same locations each time even they are filled by tillage every year. When channels become too big to be erased by normal tillage operations, they are termed classic gullies [5][6][7].

2.1.1. Visual Observation of the DEMs 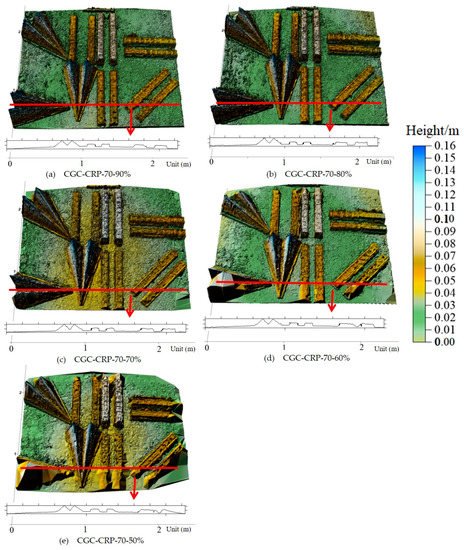 For U-channel objects, the channel size maintained the same for each individual object so that the cross-sectional area measurements can be considered repeated measurements. For the vertically oriented U-channel (VU), manually measured cross-sectional area averaged at 39.0 cm2 with a CV of 1.4%. The CGC-CRP-derived area (Table 1) ranged from 25.5 cm2 to 36.2 cm2, and averaged at 31.0 cm2 with a SD of 3.4 cm2, a ME of −8.0 cm2 and a RMSE of 8.6 cm2. There was a systematic underestimation with the U-channel, probably due to the errors casued by cutting out corners.

Table 1. Average, standard deviation (SD), mean error (ME), and root mean square error (RMSE) of the cross-sectional area (cm2) of selected transects derived from the CGC-CRP method for U-channels on the artificial surface.

For V-channel objects, the channel size changed along the channel so that the cross-sectional area measurements varied. For the vertically oriented V-channel (VV), the manual measurements of the cross-sectional area (Table 2) ranged from 0.1 cm2 to 113.9 cm2, whereas the CGC-CRP-derived value ranged from 0.0 cm2 to 114.2 cm2. Unlike the U-channel, there was no systematic under- or overestimation with the V-channel (Figure 3). Moreover, the absolute values of error for V-channel were approximately 15% less than those of U-channel. This could be rooted from that the sidewalls of V-channel were angled, not straight down and perpendicular to the ground. Therefore, the errors due to cutting out corners were expected to be much lower. 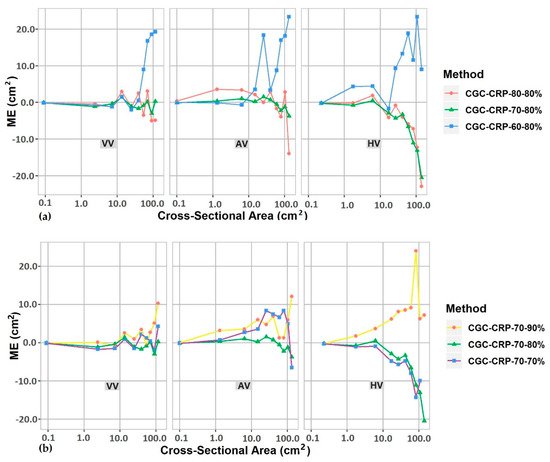 Table 2. ME and RMSE of the cross-sectional area (cm2) of selected transects derived from the CGC-CRP method for V-channels on the artificial surface.

For the soil surface, manually measured cross-sectional areas for the ten transects ranged from 376.2 cm2 to 853.1 cm2, whereas the values derived from the CGC-CRP methods ranged from 385.9 cm2 to 877.9 cm2 (Table 3, Figure 4). There was no systematic under- or overestimation. The ME ranged from −7.8 cm2 to 17.7 cm2, which can be translated to −1.6% to 3.1% of the measurement. The overall RMSE for the ten transects was 8.6 cm2, which could be translated to ~1.6% of the averaged cross-sectional area. This agrees with Castillo et al. [25], who reported that close-range photogrammetry and total station methods could produce cross-sectional area values with an error less than 4%.

Table 3. Error and RMSE of cross-section area (cm2) of selected transects derived from the CGC-CRP method for the water-induced channel on the soil surface. 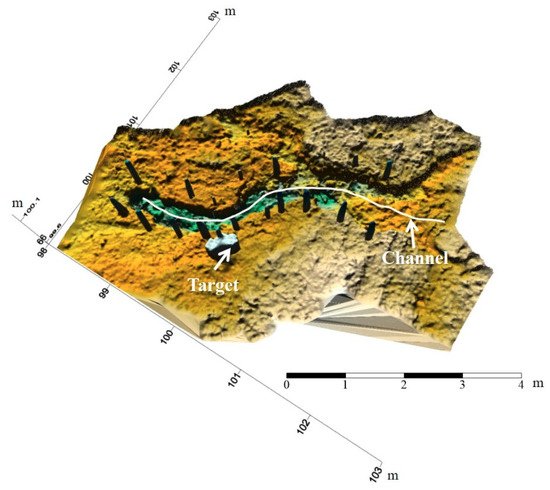 Figure 4. The map of soil surface channel produced from the DEM derived from the CGC-CRP method.

A reasonably good quality consumer-grade camera is the major equipment used with the CGC-CRP method. The price varies with brand and region but is not very expensive. Moreover, with modern technology, camera adjustment is largely automatic, so no sophisticated photo shooting skills are required for taking a clear picture.

Table 4. Different settings and application information of the CGC-CRP method.

In order to achieve an acceptable accuracy level (cm), the image overlapping rate should be ≥ 70%, and the shooting angle should be in the range of 60° to 80°. The camera shooting direction paralleled to the channel orientation is recommended. For different forms of erosion, sheet erosion is normally at the millimeter level (erosion rate of 10 Mg ha−1 yr−1 is equivalent to 0.8 mm yr−1 with a soil bulk density of 1250 kg m−3), so the CGC-CRP method may not be accurate enough and the traditional CRP method with more strict setup and error control is probably needed. However, centimeter accuracy is sufficient for rill and gully erosion studies, as rills and gullies are normally wider and deeper than 1 cm. Many field surveyors carry a consumer-grade camera for their field trips so the equipment for the CGC-CRP method is readily available. This makes the CGC-CRP method well suited for any type of field survey. It can be a survey designed for monitoring erosion channels, a soil survey or a reconnaissance type of survey for any geoscience or environment-related topics.