Polyamines (PAs), such as putrescine (PUT), spermine (SPE), and spermidine (SPD), are organic polycationic alkylamines, which are synthesized from L-ornithine or by the decarboxylation of amino acids. They are found in all living cells and mammalian cells contain a millimolar concentration of PAs. In 1678, the SPE was first identified by Van Leeuwenhoek as crystals in dried semen but not in fresh ones.

Polyamines (PAs), such as putrescine (PUT), spermine (SPE), and spermidine (SPD), are organic polycationic alkylamines, which are synthesized from L-ornithine or by the decarboxylation of amino acids [1][2][3]. They are found in all living cells and mammalian cells contain a millimolar concentration of PAs [4]. In 1678, the SPE was first identified by Van Leeuwenhoek as crystals in dried semen but not in fresh ones. In 1791, Vauquelin identified these crystals as an unknown phosphate-derived compound [5]. Further, Schreiner reported SPE as a basic compound in 1878, while Ladenburg and Abel proposed its name “spermine” in 1888 [6][7]. After one decade (1898), Poehl suggested the use of SPE for the treatment of several diseases [8], and finally, in 1924, SPE, SPD, and PUT were synthesized by Rosenheim, which led to the foundation of the modern science of PAs [9]. Moreover, the PUT was discovered in the microorganisms in ~1800s, and SPD was identified in the 20th century [10].

There are three ways to maintain the PA pool in the body: intestinal microorganisms, de novo biosynthesis (endogenous), and supply through diet (exogenous). Hence, PAs in nutrition (dietary polyamines) play a crucial role in maintaining the biosynthesis of PAs because distortion in the metabolism of PAs may lead to several health disorders [16]. Various food items contain the required amounts of PAs, i.e., plant-derived foods have mostly PUT and SPD, and meat products mainly contain SPE, while dairy products are rich in SPD and PUT [16]. A controlled diet, solely or with clinical applications, can be used as an effective treatment against various cancer, cardiovascular diseases, Huntington’s disease, Alzheimer’s disease, and Parkinson’s disease.

2. Types, Structures, and Functions of PAs

Apart from this, agmatine was also detected in human tissues in a trace amount, but it has no active physiological role [4]. The number and presence of amino groups impart different physiological and biochemical roles to biogenic PAs. PUT and cadaverine have two amino groups in their structures and are known as diamines. SPD contains three amino groups and classified as triamine, while having four amino groups, SPE is generally referred to as tetramine (Figure 1) [17]. 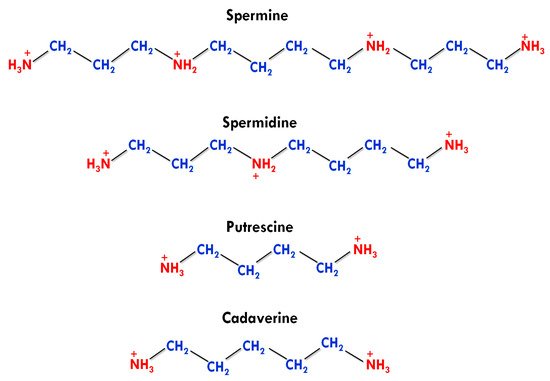 The functions of PAs include cell differentiation, cell proliferation, gene regulation, cell signaling, and apoptosis [4][18][19][20]. PAs also stimulate post-translation modification with the help of eIF5A (a translation factor) [21]. PAs interact extensively with the cellular molecules and perform various crucial functions in the body (Figure 2). Important known functions of PAs are described below.

PAs are necessary for cell proliferation and differentiation. The depletion of PA by α-difluoromethylornithine (DFMO) leads to an enhancement in the expression of p53, which consequently inhibits cell growth both in vivo and in vitro conditions [22]. It helps in the migration of vascular smooth muscle cells after endothelial injury [23]. It consequently halted cell growth [24][25].

PAs are highly positive molecules that bind on the acidic sites of different macromolecules, such as nucleic acids, proteins, and membrane phospholipids [19]. PAs govern various gene expression activities and their regulation as well [22][19]. Moreover, PAs’ interaction with RNA has also been illustrated in the presence of physiological Mg2+ions PAs act at different levels during protein expression, i.e., initiation of 30S subunit of the ribosome for assembly, protein expression at the cellular level, and initiation to form Ile-ANRt

The transcription of many genes, including c-Jun and c-Myc, are regulated by PAs [19]. Likewise, selective PAs are responsible for the regulation of AdoMetDC, AZ, and SSAT for the translation of various mRNA sections [26][27][28]. Additionally, several studies showed the effect of PAs on the cell signaling pathways by affecting the status and levels of main regulatory proteins such as CDK-4, GSK-3β, p53, p27Kip, p21Cip1, Src, EGFR, Mdm2, Akt/protein kinase B, and importin-α1 [29][30][31][32].

The interaction of PAs with RNA affects the level of individual cell proteins in several ways such as facilitating initiation complexes formation, change in the structures of ribosomes, and enhancing frameshifting [33][34]. PAs can also influence the protein structure by the direct or indirect effect on the degradation and processing of post-translational protein [35][36].

During post-translation modification, SPD donates the aminobutyl group to the translation factor (eIF5A) with the help of deoxyhypusine synthase enzyme, which consequently results in the formation of hypusine (Nϵ-(4-amino-2-hydroxybutyl) lysine) [37]. Proteins having these proline stretches regulate several functions, such as DNA binding, transcription, RNA splicing, cell signaling, and cytoskeleton-related functions for the development and growth of the cells [38][39]. Vertebrates possess another gene encoding eIF5A2, which expresses less and is not crucial for the body; however, eIF5A2 has been found in various cancer cells, responsible for poor prognosis and rapid growth [40][38]. Moreover, PAs’ depletion in mammalian cells using an inhibitor of SPE synthase, i.e., difluoromethylornithine plusN1-(3-aminopropyl)-cyclohexylamine showed an inhibitory effect on cell growth by impacting hypusine level [21].

Kir channels represent a superfamily of K+ion channels, such as voltage-gated, two-pore, cyclic nucleotide-gated, and calcium-gated channels [4]. The potassium flux via Kir channels maintains the electrolyte equilibrium, membrane potential, and electron activity of neurons and cardiac muscles. A study ofXenopusoocytes revealed that polyamine binding initiated the rectification in the HRK1 Kir channel, which was observed subsequently in the large family of such Kir channels [41]. This brought a small change in the concentration of PAs because of the higher potency of SPE than SPD, which was responsible for a significant change in the activity of Kir channels [41][42].

In a structural study of Kir1 to Kir7 subfamilies, it was observed that the PAs first bind to cytoplasmic pore at a shallow binding site with low voltage dependence and then move toward a deep position through a long pore. This position is called the rectification controller or acidic residue, which interacts with PAs to initiate steep voltage dependence [43][44].

TRPC channels are comprised of a seven-member family (TRPC-1, 2, 3, 4, 5, 6, and 7) in the mammalian cells. Additionally, they act as second messenger-operated and store-operated channels, responsible for contractility and extractability of smooth gastrointestinal muscle [4]. On the other hand, intracellular SPE increases the communication between astrocytes and also in gap junctions [45]. It also helps in coupling connexin Cx43

Synaptic plasticity and synaptic transmission that determine learning and memory occur in the cellular membrane by the binding of glutamate (ligand). There are three classes of these receptors and each class has many members on the basis of their active agents, such as AMPA, NMDA, and kainate. Few NMDA receptors work as voltage-dependent and ligand-gated channels to control synaptic plasticity [46][47]. PA effects include inhibition and stimulation of a voltage-dependent channel, which depicts an open-channel block.

PAs also impact the AMPA receptors family, which do not have glutamate subunits [48]. AMPA receptors act as neurotransmitters to regulate synaptic power and enhancing neurotransmission in the central nervous system (CNS). Intracellular PAs, potently SPE, have the capacity to block these channels, which bind on the pore region of the channels [49]. Notably, PAs can regulate the excitability limit of synapses and the concentration of Ca2+flux.

It has been reported that autoreactive B cells and T cells along with cancerous cells contain a higher concentration of PAs during autoimmune diseases [50]. The L-arginine catabolism in suppressive myeloid and tumor cells decreases the functions of cytotoxic T cell, which suggests a link between T cell suppression and PAs [50]. It has been observed that the higher concentration of PAs in an autoimmune patient form a nuclear cluster that reacts with RNA, DNA, and other molecules for stabilizing autoantigens [51]. The formation of single-stranded or double-stranded DNA is the predominant response of autoimmune B cell [52].

PAs were reported to regulate the activity of TGase in many functions, including cell differentiation, post-translational protein modification, kinase activity, wound healing, and signal transduction [53][54][55]. (TG2) catalyzes protein post-translational change by adding PAs into protein or forming epsilon lysine bonds in an inter- or intramolecular cross-link manner [56][57]. On the other hand, a higher enzyme activity of TG2 was found to be associated with various neuropathological conditions (acute and chronic) such as amyotrophic lateral sclerosis (ALS), Huntington’s disease, Alzheimer’s disease, and Parkinson’s disease [58][59]. For instance, primary astrocytes (cultured) were exposed to glutamate (excitotoxic) that led to oxidative stress with TG2 up-regulation.

In a study, the activation of nuclear factor-κB was found to be involved in the development of ROS and the activation of TG2 upregulation when the cultured astrocytes of rat hippocampus were exposed to lipopolysaccharide (LP) [60]. LP is commonly used to stimulate iNOS induction. They reported a suppressed level of LP-induced effect after the treatment of ammonium pyrrolidine-1-carbodithioate (nuclear factor-κB inhibitor) in the astrocytes [60].

3. Metabolic and Transport Pathway of Polyamines in Humans

The homeostasis of PAs in the mammalian species can be understood through three steps that can be broadly classified as synthesis, catabolism, and transport. PAs are produced in the cell cytoplasm. In vivo production of polyamine begins with the intake of amino acids (arginine, lysine, and methionine) through food, serving as substrates for polyamine synthesis through the action of micro-organisms/enzymes [2] (Figure 3). 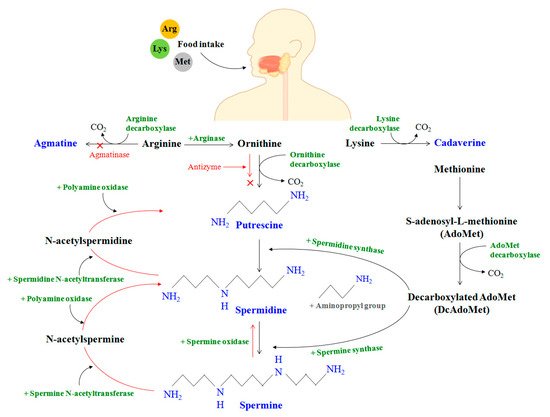 In the mammalian gut, the enzyme arginase first decomposes the amino acid arginine to produce ornithine. Meanwhile, methionine is transformed to S-adenosyl-L-methionine (AdoMet), which is further converted to decarboxylated AdoMet or DcAdoMet in the presence of the AdoMet decarboxylase enzyme. The DcAdoMet thus produced serves as an aminopropyl group donor to putrescine for the synthesis of spermidine in the presence of spermidine synthase. It should be noted that both ODC and AdoMet decarboxylase are PA-rate-limiting enzymes that are strictly controlled at the transcriptional and post-transcriptional stages.

/spermine N-acetyltransferase (SSAT) and polyamine oxidase (PAO) are jointly responsible for the mechanism of polyamine catabolism. A higher degree of regulation involves the action of other oxidases, along with their cofactors, within the body to generate permanently polyamine derivatives from amino acids that cannot be recycled back to PAs. AZIn can therefore bind to AZ, releasing ODC in the process that accelerates polyamine formation. It was concocted that the increase in spermine oxidase expression with age could cause oxidative degradation in the levels of spermine.

Polyamine regulation in the body is also facilitated by polyamine transport and cellular uptake. In a later investigation, Abdulhussein and Wallace [61] studied the PA transport mediating potential of ABC and eight SLC transporters (SLC22A1, SLC22A2, SLC22A3, SLC47A1, SLC7A1, SLC3A2, SLC12A8A, SLC22A16). Hamouda et al. also reported an unexplored gene, ATP13A3, as a potential candidate for PA transport that complemented PUT transport deficiency [62]. In another recent study, the gene SLC18B1 of the vesicular amine transporter family was identified as a transporter of spermine and spermidine.