Endocannabinoid System and Its Regulation

The endocannabinoid system (ECS) is a major signaling network comprised of endogenous, lipid-based, physiological ligands (endocannabinoids) that play a pro-homeostatic role in central and peripheral organs of the human body. It is believed to constitute a feedback loop for nutrient-energy metabolism, and regulates various cellular functions, immune responses, and stress adaptation pathways to support physiological homeostasis as human diets change due to evolutionary and environmental factors [1]. The physiological outcomes may range from simple functions like eating, sleeping, and relaxing, to the more complex, including neuroplasticity, metabolism, and inflammation [2]. The functional integration of the ECS system in the control of inflammation, energy metabolism, and emotional homeostasis has been directly connected to its ability to adequately perceive and respond to the paucity of these signals [3]. Chronic, excessive, or unresolved overstimulation of the ECS often results in systemic imbalance. This can trigger oxidative stress by increasing the levels of reactive oxygen species (ROS) that adversely affect protein oxidation [4], mitochondrial bioenergetics [5], cellular functions, and redox balance maintained in part by the nuclear factor erythroid 2-related factor 2 (Nrf2) [6][7].

Endocannabinoids are metabolite products of dietary essential polyunsaturated fatty acids (PUFAs) (Figure 1). PUFAs are essential in terms of their critical role in maintaining the efficient structure and integral function of the cell membranes, and they must be obtained from the dietary sources [8]. 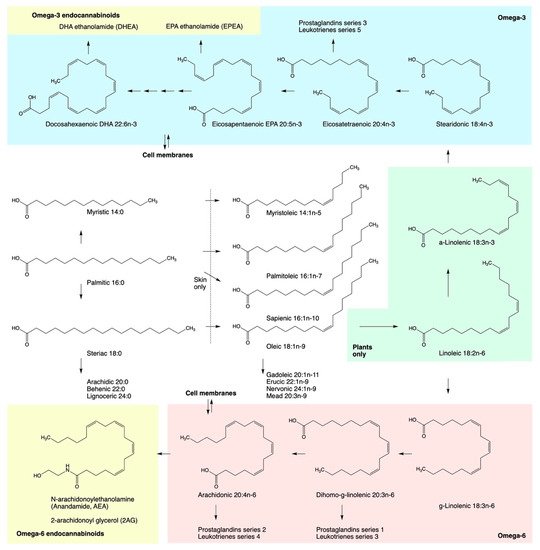 2. ECS Tone and Its Health Implications

Endocannabinoids activate presynaptic and astrocytic CB1 receptors distributed primarily in the central nervous system and CB2 receptors found in highest densities on the peripheral immune and hematopoietic cells [9]. The wide and heterogeneous distribution of CB1 receptors in the brain [10], and recent findings of CB2 receptors not only in microglia but also in neurons [11], at the same time suggests that strengthening of the ECS tone by mild activation of central CB1 and CB2 is closely related with an emotional (anxiety, depression, PTSD) wellbeing, while overstimulation of CB1 activity induces psychotic symptoms [12].  An alternative strategy to improve ECS tone is increasing tissue levels of endocannabinoids by inhibiting their cellular uptake and metabolism [13]. This approach was proven successful with a series of pharmacological inhibitors targeting two key enzymes of ECS metabolism-fatty acid amide hydrolase (FAAH) that degrades AEA [14], and monoacylglycerol lipase (MAGL) that degrades 2-AG [15].

Biological effects of arachidonic acid that serves as a precursor for endocannabinoids, are largely attributed to its enzymatic conversion to prostaglandins and thromboxanes by membrane-bound cyclooxygenases (COX), leukotrienes by cytoplasmic lipoxygenases (LOX), and lipoxides by cytochrome P450 epoxygenases [16]. Prostaglandins derived from arachidonic acid serve as secondary messengers of hydrophilic bioactive molecules such as glucocorticoids, non-steroidal anti-inflammatory drugs (NSAIDs), and statins to regulate blood cell aggregation, dilation of blood vessels, and vascular permeability, resulting in increased tissue edema, hyperemia, and fever to maintain the propagation of an inflammatory process. Both COX and LOX enzymes metabolize eicosanoids and endocannabinoid substrates with a similar efficacy [17]. While the oxidized endocannabinoids do not activate classical CB1/2 receptors, their cellular targets and respective biological mechanisms of action remain to be elucidated.

Dietary fatty acids play a direct role in generation of lipid mediators that modulate inflammation and oxidative stress. While humans are very effective at desaturating two major circulating fatty acids, palmitic acid 16:0 and stearic acid 18:0 to their palmitoleic acid 16:1(n-7) and oleic acid 18:1(n-9) monounsaturated counterparts, they lack the enzymes to introduce the second unsaturated bond to form polyunsaturated linoleic acid 18:2(n-6) (a dietary precursor of omega-6 fatty acids) and α-linolenic acid 18:3(n-3) (a dietary precursor of omega-3 fatty acids) in their bodies. Dietary α-linolenic acid can be slowly metabolized into the long-chain polyunsaturated omega-3 fatty acids EPA and DHA when ingested directly, albeit with a lower efficiency [18]. Some marine organisms, especially fatty fish and shellfish accumulate large quantities of algae-derived EPA and DHA and serve as an excellent dietary source of these fatty acids [19].

Hemp oils derived from the cannabis plant (Cannabis sativa L.) are a rich source of lipid bioactive compounds, including cannabinoids, β-caryophyllene, and polyunsaturated fatty acids [20] that potentially interact with the ECS. Following the first elucidation of structure and chemical synthesis of cannabinol (CBN), THC, and CBD in 1940s-60s [21] (Figure 2a), the first THC-binding site was described as CB1 receptor twenty years later [22], while specific molecular targets of CBD remained unknown until today. The therapeutic potential of cannabinoids, both as single bioactive agents and in combination with other bioactive plant compounds, to manage and alleviate multiple human health outcomes has received an excellent review [23]. 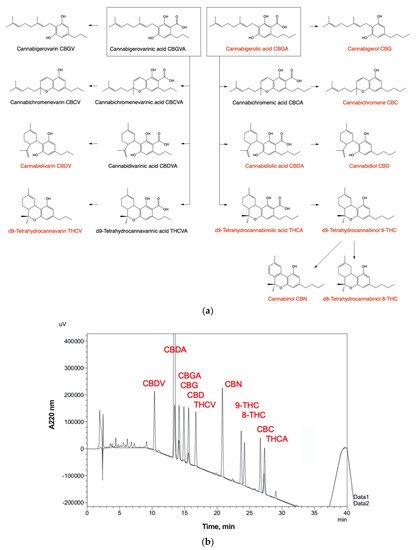 It is generally accepted that Δ9-THC found in Cannabis is a partial agonist of both CB1 and CB2 receptors similar to the endocannabinoids, with a slightly higher affinity for CB1 in the Ki range 4–40 nM [24], and exerts both psychotropic as well pain- and emesis-controlling effects in the CNS via CB1 and 5HT3 receptors activation [25].

Overall, the hemp plant produces in excess of 140 cannabinoids that determine its potency and over 100 terpenes that define its distinctive flavor and aroma [26]. A typical high-resolution high-performance liquid chromatography (HPLC) analytical method with UV detection is capable of a full baseline resolution of 11 major cannabinoids including their native (acid) and neutral (decarboxylated) forms (Figure 2b).

7. ECS and the Oxidative Stress: Role of Dietary Antioxidants

The ECS tone is also critically associated with other systemic function of the body including inflammation and oxidative stress. Cellular defense mechanisms against oxidative, inflammatory, and toxic biochemical and environmental challenges constitute an important preservation mechanism to maintain optimal cellular structure and metabolism. The ability of the body to detoxify free radicals from an imbalanced physiological manifestation of ROS and reactive nitrogen species (RNS) may lead to a state of oxidative stress. The cellular redox homeostasis is challenged due to the formation of ROS and the prolonged oxidative stress is the underlying cause for unresolved inflammation leading to the development of several chronic metabolic conditions [27]. The uncontrolled ROS production and activity of the native antioxidant enzymes superoxide dismutase, glutathione peroxidase, nitric oxide synthase and catalase leads to increased peroxidation of polyunsaturated fatty acids, DNA oxidation, and cell death [28], therefore, the balanced redox system is critical in preserving the healthy metabolic conditions. Phytocannabinoids, including CBD, decreased the neuronal damage associate with β-amyloid accumulation and NADPH oxidase activity in SH-SY5Y neuroblastoma and BV-2 microglia cells, thus ameliorating oxidative stress [29].

Additional dietary Nrf2 activators such as glucosinolates found in cruciferous vegetables may potentiate induction of genes that regulate defenses against oxidative stress, inflammation, and DNA-damaging electrophiles when consumed as a part of the healthy diet or dietary intervention strategy. Studies have shown that many isothiocyanates, particularly sulforaphane, increased expression of antioxidant enzymes via the activation of Nrf-2 dependent pathway [30]. The biological actions of glucosinolate-derived isothiocyanates (ITCs) with active myrosinase component enhanced the bioavailability of ITCs thereby enhancing Nfr2 activation and promoting cellular antioxidant capacity [31].

Dietary PUFAs are major sources for the biosynthesis of endocannabinoids, both by contribution of omega-6 fatty acids to the arachidonic biosynthesis pathway and modulation of the ECS tone by dietary omega-3 EPA and DHA esterified to phospholipids. Understanding this intricate balance could hold potential to reduce over activation of central and circulating endocannabinoids observed in subjects with metabolic disorders [32], as well as modifying the onset and progression of many chronic metabolic and immune disorders associated with elevated inflammation and oxidative stress. The role of multiple cannabinoids in the integrated and often opposing control of these outcomes may be considered direct evidence in favor of developing novel strategies that deliver appropriate quantities and ratios of different metabolites found in full-spectrum hemp oils and provide a more discriminating means of eliciting a balanced and personalized response. While no single bioactive principle may balance these complex health outcomes, novel intervention strategies and selected nutrient supplementation regimes that specifically target the ECS, and metabolic health outcomes could support key mediators and inflammatory resolution pathways critical in maintaining a well-balanced systemic function of the body.