The gut microbiota is often mentioned as a “forgotten organ” or “metabolic organ”, given its profound impact on host physiology, metabolism, immune function and nutrition. A healthy diet is undoubtedly a major contributor for promoting a “good” microbial community that turns out to be crucial for a fine-tuned symbiotic relationship with the host. Meanwhile, diet is a key modifiable factor influencing the gut microbiota in several lung diseases.

The human microbiota aggregates an estimate of 100 trillion (1014) microbial cells that reside or colonise all body surfaces and cavities exposed to the external environment, namely, skin, eyes, the urogenital system, and the epithelial surfaces of the respiratory system and gastrointestinal tract (GIT) [1][2][3][4]. The highest microbial density, by far, is found in the GIT (gut microbiota; 3.8 × 1013 bacteria in the colon), where a diverse microbial community (bacteria, archaea, fungi and protists) resides, interacts with each other and the host [4][5].

The adult human gut is predominantly colonised by two bacterial phyla, Firmicutes and Bacteroidetes, that comprise over 90% of the total gut microbial communities, followed by other subdominant phyla such as Actinobacteria, Proteobacteria and Verrucomicrobia [6][7] (Figure 1).

Figure 1. Human gut microbiota: the five major bacterial phyla and their predominant genera, according to the study by Qin et al. 2015 [8][9].

The interaction between host and both microbial antigens and microbial metabolites occurs through the single layer of epithelial cells. These cells act as guardians and transmit key signals to the host cells. These interactions influence immune responses and, ultimately, disease risk [5][10].

The intestinal barrier is home to presumably the largest pool of the immune cells in the human body. In fact, this is expected as this is a place to encounter a vast community of microbes, toxins, metabolites and dietary components [5][11][12]. Therefore, it is subject to a tight regulation in order to simultaneously optimise an efficient absorption of nutrients, water and electrolytes from food and provide a barrier to prevent the passage of foreign antigens, microorganisms and their toxins [13]. The gut barrier is therefore controlled by fine-tuned immune system–microbiota interactions ensuring the right discrimination between harmful and harmless antigens and resulting in adequate immune responses [5][14].

The commensal microbiota plays a central role by reinforcing barrier immunity while protecting their own ecological niche against opportunistic pathogens [15][16]. On the other hand, the immune system impacts the composition of the gut microbiota [5][14].

Even though there is a vast density of microbial cells in the gut, it is unusual for commensal bacteria to breach the intestinal barrier, therefore avoiding tissue inflammation and microbial translocation and maintaining the mutualistic relationship between host and the gut microbiota.

4.1. The Cross-Talk between the Gut and the Lungs: Long-Reaching Immune Modulation

The cross-talk between the gut and the lungs occurs through lymph and bloodstream circulatory systems and is crucial for passing long-reaching “immunological information” between organs [19][20][21]. There seems to be a “common mucosal response” where the effects exerted by the gut microbiota and their metabolites on the intestinal mucosal immunity influence the immune response at distal mucosal sites, such as the lungs [21][22][23]. The exact mechanisms by which the gut impacts on lung immune responses, although not fully understood, include systemic propagation of bacterial-derived components (e.g., LPS), metabolites (e.g., SCFAs) and migrating immune cells [24][21][25][26][27]. The interactions within gut–lung axis are bidirectional as the lung can also influence the gut, for instance, by lymphocyte migration and inflammatory cytokines [27] (Figure 2). 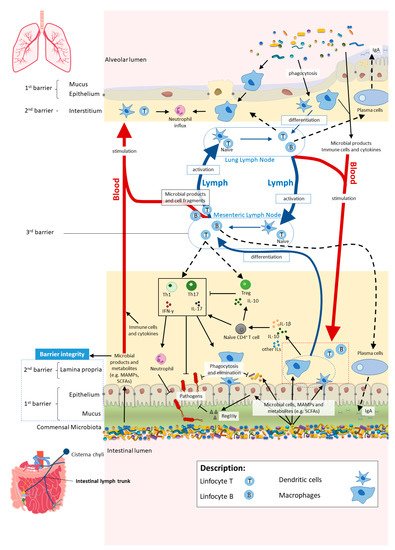 Figure 2. In homeostasis, microbe-associated molecular patterns (MAMPs) from the gut microbiota are recognised by pattern recognition receptors (e.g., Toll-like receptors (TLRs)) and induce antigen presenting cells (APCs), such as macrophages and dendritic cells (DC), to produce interleukins (e.g., IL- 1β and IL-10) to regulate immune responses by different subsets of T cells, neutrophils and macrophages, among others. Activated APCs induce differentiation of naïve CD4+ T cells into CD4+ regulatory T cells (Treg) (which are crucial for both maintaining tolerance to commensal microbiota and regulating other immune cells), and other effector T cells such as Th1 or Th17 (expressing cytokines, e.g., IL-17 and interferon gamma (IFNγ)) with a central role in host defence against invading pathogens, while controlling the expansion of commensals. Microbial cells or their products in the lamina propria are either phagocytosed and eliminated or transferred to mesenteric lymph nodes (MLN) by APCs, where they induce differentiation of the T and B cells. Activated B and T cells move back (black dashed arrows) to the intestinal mucosa to directly act on their target or to continue to trigger other immune cells. The majority of activated B cells differentiate into immunoglobulin A (IgA)-producing plasma cells. Bacterial metabolites, such as short-chain fatty acids (SCFAs), and expression of antimicrobial peptides (e.g., RegIIIγ) by epithelial cells (induced by TLR activation by MAMPs) reinforce the intestinal barrier integrity. Proposed pathways of the gut–lung axis that would explain the impact of the gut microbiota on the lung immunity include the migration of: (1) activated T and B cells from the MLN to distal sites such as the lung epithelium and lung lymph nodes, through lymph and blood; (2) microbial products and metabolites or surviving bacteria from the intestinal mucosa to the lung, through systemic propagation by lymph and blood circulations. Although not yet well established in the literature, the other way around has been proposed as well (from lung to gut), with the lung microbiota exerting effects in the intestinal mucosa. Scheme based on Bingula et al. [19].

SCFAs, mainly propionate, acetate and butyrate, resulting from the fermentation of undigested soluble dietary fibres by the gut microbiota, are important immunomodulatory metabolites and their role has been extensively explored in the gut–lung axis. SCFAs mostly exert anti-inflammatory effects in the intestine by modulating epithelial and immune cell functions through the activation of G protein-coupled receptors 41, 43 and 109A (GPR41, GPR43 and GPR109A) and the inhibition of histone deacetylases [25][28].  The direct role of SCFAs in the lungs is most likely not substantial as circulating SCFAs do not seem to accumulate in the airways and there is no significant production of SCFAs in place.

In addition, the migration of immune cells from the gut to the lungs as well as MAMPs seem to be other important players in the long-reaching immune interactions [26]. The immune cells group 2 innate lymphoid cells (ILC2s) migrate from the intestinal lamina propria to the lungs, where they support anti-helminth defence and tissue repair, during infection in mice [29].

A recent analysis integrating dietary, microbiome and plasma metabolomics into an evaluation of the intestinal metabolome in 361 3-year old-children in the USA, revealed inverse associations between asthma and intestinal polyunsaturated fatty acids (PUFAs), which are likely representing dietary PUFAs both in excess of the amount absorbed in the small intestine and non-metabolised by the gut microbiota. Intestinal PUFAs inversely correlated with the asthma-associated intestinal microbiome. Furthermore, a diet rich in fried and processed meats was linked with asthma and with asthma-associated intestinal metabolites [30].

The high intake of dietary fibre has been recently suggested to become a therapeutic intervention in COPD as a mean to reduce chronic airway inflammation by promoting a healthy gut microbiota and increased SCFA production [31]. Lately, a prospective cohort study of 35,339 Swedish women found long-term (10 years) high fibre intake (from cereal and fruit but not vegetable sources) to be linked with a 30% lower risk of COPD [32]. Accordingly, the above-mentioned Australian study reported a lower dietary fibre intake in COPD subjects, compared to healthy controls [33].

Diet is a readily modifiable factor influencing the gut microbiota. Research focusing on how the gut–lung axis acts on local and systemic immunity and the subsequent effects on human health is still in its infancy. Increasing recent evidence starts to unveil the impact of both nutrition and gut microbiota in the respiratory function. A diet rich in fibres, such as the Mediterranean diet, promotes a healthy gut microbiota composition, enhancing production of SCFAs, like butyrate. The beneficial impact on gut microbiota and its metabolites improves lung function in numerous diseases, such as asthma or COPD, by reducing local and systemic inflammation. The diet itself appears to modulate directly the lung microbiota as well. Importantly, diet is one of the most readily accessible interventions for everyone to prevent and/or ameliorate a wide range of diseases. For this fact and from the accumulating scientific evidence, we conclude that diet and nutrition should not be neglected when one talks about respiratory diseases.

Besides diet, probiotic intake and other factors to manipulate the gut microbiota, microbial products or metabolites could be possibly used in the clinic to favour a healthy state. Probiotics may be cost-effective regarding prevention and treatment of some diseases; however, since they usually fall into the regulatory category of food or dietary supplements [36], they are not affordable to everyone. Moreover, the experimental evidence to support label health claims for probiotics are usually very challenging to provide, as there are very variables to consider: specific species, strain or dose of probiotics, duration of both treatment and effects, different host response, etc. [36][37].

Besides this, other components of the gut microbiota should be explored in future studies, specifically the mycobiota and virome, which are currently largely unexplored. Their role in the gut–lung axis should be examined with the aim of finding new therapeutic strategies to improve lung diseases.