Predator community structure is an important selective element shaping the evolution of prey defence traits and strategies. Carabid beetles are one of the most diverse families of Coleoptera, and their success in terrestrial ecosystems is related to considerable morphological, physiological, and behavioural adaptations that provide protection against predators. Their most common form of defence is the chemical secretion from paired abdominal pygidial glands that produce a heterogeneous set of carboxylic acids, quinones, hydrocarbons, phenols, aldehydes, and esters.

The carabid beetles (Coleoptera, Carabidae) include approximately 40,000 described species that are ecologically important as predators in many ecosystems and range in feeding habits from generalist to specialists [1][2]. They are often used as indicators because they are extremely sensitive to environmental changes [3][4][5]. Furthermore, as generalist predators, ground beetles provide important ecosystem services by lowering populations of invertebrate pests and weed seeds [6][7]. However, carabids are consumed by a number of different species, including invertebrates and insectivorous vertebrates such as birds, mammals, amphibians, and reptiles [1]. Predator–prey interactions are likely the major driving force for the evolution of defences against predators in carabid beetles. Strategies to escape predatory attacks primarily include morphological adaptations, such as cryptic or warning coloration [8][9][10][11] and dorso-ventral flattening, large eyes, and long legs to escape [12], as well as secretion of chemical repellents [13][14][15]. Ground beetles possess a pair of abdominal glands called pygidial glands that produce defensive secretions. The main function of the pygidial glands is to defend against predators, but they also engage in biological activities such as facilitating the penetration of the defensive substances into the integument of the predator and inhibiting the growth of fungi and pathogens [16][17]. A few studies to date have examined the chemical compounds of pygidial gland secretions [18][19][20][21][22] and comparatively investigated their taxonomic significance [14][23][24][25][26]. We review the current state of knowledge on the morphology of pygidial glands in carabid beetles.

Forsyth [27] first proposed a comparative description of pygidial glands in 71 species from 34 tribes to define phylogenetic relationships within Carabidae. Currently, approximately 150 species from 43 tribes have been described (Table 1). The most commonly used examining technique to study pygidial gland morphology is light microscopy (LM). In addition, other techniques such as fluorescence (FM) microscopy, scanning electron microscopy (SEM) and focused ion beam/scanning (FIB/SEM) electron microscopy, (TEM) transition electron microscopy, synchrotron radiation X-ray phase-contrast micro-tomography (SR-PhC micro-CT) are also applied.
Table 1. Summary of carabid species in which the pygidial gland morphology has been investigated and the method used for analyses. Abbreviations—CLSM: confocal laser scanning microscopy; FIB/SEM: focused ion beam/scanning electron microscopy; FM: fluorescence microscopy; LM: light microscopy; NLM: non linear microscopy; SEM: scanning electron microscopy; SR-PhC micro-CT: synchrotron radiation X-ray phase-contrast micro tomography.
Each pygidial gland consists of a variable number of secretory lobes (acini), collecting duct, reservoir chamber, reaction chamber, and efferent duct (Figure 1). These glands (class 3 according to the classification of Noirot and Qhennedey [45][46]) are variable in structure and have been described in several species [27][39]. The lobe or acinus, which is spherical or elongated and enveloped in a thin basal lamina, is a cluster of secretory units, connected to the collecting duct by a conducting duct that drains secretions outward. The secretory unit consists of two parts, an elongated, cube-shaped secretory cell surrounding a receiving duct and a duct cell surrounding the conducting duct [27][28][29][43]. The receiving duct is a porous tube composed of one or more layers of epicuticle located in its extracellular space and bounded by microvilli. The collecting duct has an epithelial wall of flattened cells, lined by endocuticle, and a thin layer of epicuticle that is regularly folded into spiral ridges, annular arrays, or pointed peg-like projections, that reduce the volume of the lumen to control the free flow of secretion to the reservoir chamber [27][28][43]. The entrance of the collecting duct to the reservoir chamber is of great variability. It is located at the anterior or middle position in Scaritinae, Brachininae, and some Bembidiini, Pterostichini, Amarini, Carabini, Nebriini, Metriini, and Paussini [25][27][28][29][32][34][38]. While it is located near the entrance of the efferent duct in Harpalini, Agonini, Chlaeniini, Dryptini, Anthiini, Lebiini, Trachypachini, Omophronini, Loxandrini, Catapieseini, Galeritini, and Zuphini [23][25][27][42]. The reservoir chamber is a spherical, elongate, or bilobate compartment of variable size. Interwoven muscle bundles cover the outer wall and are connected to tracheal branches. The basal membrane supports flattened epithelial cells covered by a thin uniform layer of endo- and epicuticle. The muscular contraction regulates secretion through a valve that separates the reservoir from the reaction chamber. In Paussinae, Brachininae, and Carabinae, an accessory gland is located below the valve [27]. Secretions from the reservoir chamber are mixed with secretions from the accessory glands in the reaction chamber. The efferent duct leads from the reservoir chamber to the external orifice. The close association of the pygidial glands with the tracheal branches suggests a high aerobic metabolism. 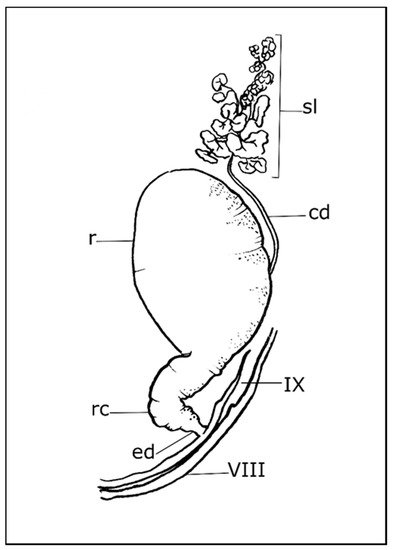 Figure 1. Schematic drawing of a pygidial gland. cd: collecting duct; ed: efferent duct; r: reservoir chamber; rc: reaction chamber; sl: secretory lobe; VIII: eighth tergite; IX: ninth tergite (for more details of species listed in the text, see Forsyth (1972) [27]).
The external orifice is located dorso-laterally in the posterior part of the abdomen, near to the antero-lateral margin of the ninth tergite, and close to the tergo-sternal suture in Carabinae, Scaritinae, Paussinae, Elaphrinae, Broscinae, and Brachinini, or at the posterolateral margin of the eighth tergite in derived lineages, e.g., Trechinae and Harpalinae, and including Licinini, Chlaeniini, Panagaeini, Anthiini, Zabrini, Oodini, Pterostichini, and Agonini [27][47]. Differences in pygidial gland morphology between sexes have been reported in Cicindela campestris [30].