Phototrophic purple and green sulfur bacteria have been known for a long time. These microorganisms are characterized by using reduced sulfur (S) compounds as electron donors in the process of anoxygenic photosynthesis and are classified into different families based on their morphology, physiological and biochemical characteristics. Representatives of the largest family, the Chromatiaceae—members of which may be observed in nature as a light red coloration of the anaerobic layer of water—were first described in the second half of the 19th century. In contrast, the less numerous Chlorobiaceae family—also referred to as green sulfur bacteria—were isolated later in the second half of the 20th century.

There are two main types of bacterial photosynthesis: oxygenic (cyanobacteria) and anoxygenic (sulfur and non-sulfur phototrophs). Molecular mechanisms of photosynthesis in the phototrophic microorganisms can differ and depend on their location and pigments in the cells. This paper describes bacteria capable of molecular oxidizing hydrogen sulfide, specifically the families Chromatiaceae and Chlorobiaceae, also known as purple and green sulfur bacteria in the process of anoxygenic photosynthesis. Further, it analyzes certain important physiological processes, especially those which are characteristic for these bacterial families. Primarily, the molecular metabolism of sulfur, which oxidizes hydrogen sulfide to elementary molecular sulfur, as well as photosynthetic processes taking place inside of cells are presented. Particular attention is paid to the description of the molecular structure of the photosynthetic apparatus in these two families of phototrophs. Moreover, some of their molecular biotechnological perspectives are discussed.

Phototrophic purple and green sulfur bacteria have been known for a long time [1]. These microorganisms are characterized by using reduced sulfur (S) compounds as electron donors in the process of anoxygenic photosynthesis and are classified into different families based on their morphology, physiological and biochemical characteristics. Representatives of the largest family, the Chromatiaceae—members of which may be observed in nature as a light red coloration of the anaerobic layer of water—were first described in the second half of the 19th century. In contrast, the less numerous Chlorobiaceae family—also referred to as green sulfur bacteria—were isolated later in the second half of the 20th century [2].
Despite the elapsed time since their first description, not all mechanisms of metabolism, anoxygenic photosynthesis and structures of these bacteria have yet been fully described. The main problem is that—although many articles have been written on this topic—there are very few scientific studies available dealing with this issue, and only a fraction of them provide comparative data on these two respective families. In most microbiological publications and monographies, the above families are mentioned only marginally or often not at all; this may be one of the reasons why the interest regarding these phototrophs from the scientific community is so small. This is best demonstrated by the fact that a large number of scientific publications dealing with these microorganisms are mainly penned by a narrow circle of scientists, including Norbert Pfennig [3], Johannes Imhoff [4] and Jörg Overmann [5].
The genomic characteristics of these bacteria (including its physiological and structural aspects) are largely unknown because they are difficult to cultivate in the laboratory. Some species of anoxygenic phototrophs can grow (cell densities of 2–5 g/L) within one week to more than one month. It was not until 2011 that the firs—and so far only—complete genome of Allochromatium vinosum DSM 180T, the representative of the taxon Chromatiaceae, was sequenced [6]. In contrast, more details are available on the Chlorobiaceae, as they have been better studied; by the end of 2016, 13 genomes of members of this family were fully sequenced. Nevertheless, even these developments do not cover the diversity of this family, thus necessitating further studies in this field [5].

The Chromatiaceae family—formerly called Thiorhodaceae [7]—is a family defined as a group of Gamma-proteobacteria, which are—under appropriate conditions—capable of storing elemental sulfur granules within their cells [8]. Generally, these bacteria use reduced sulfur compounds (hydrogen sulfide (H2S)) as an electron-donor for anoxygenic photosynthesis under anaerobic conditions [9]. The vast majority of representatives are therefore anaerobic photolithoautotrophs, but there are exceptions, capable of photolithoheterotrophy, chemolithoautotrophy or chemoorganoheterotrophy at low molecular oxygen (O2) concentrations [10].
The specific conditions (anaerobiosis, presence of hydrogen sulfide and organic compounds) provide the growth of the species of this family [11][12]. These are mainly freshwater resources, such as lakes, ponds or pools, where these bacteria occur to a greater extent, mainly in summer and autumn, when sulfate-reducing bacteria decompose biomass and thus, increase the content of H2S in water [13][14][15][16]. The first mentioning of the presence of purple sulfur bacteria in these habitats dates back to the end of the 19th century [17][18]. Other frequent habitats include:
Extreme habitats include hot sulfur springs (>40 °C), where Thermochromatium tepidum [24], the only thermophilic genus of this family may be found. Some scientists speculate that members of the Chromatiaceae family could exist even in sea ice [25], a speculation supported by the discovery of bacteria related to the genera Rhabdochromatium and Thiorhodovibrio [8][10][11].
Representatives of the Chromatiaceae family are mesophilic, predominantly motile, rod-shaped or coccoid-shaped bacteria. All representatives have bacteriochlorophyll (BChl) a or b, contain specific carotenoids (e.g., okenone, spiriloxanthine, lycopene). The species show low to no tolerance to O2 and require the presence of light and reduced sulfur compounds in the environment for growth, or other specific conditions where there is high concentration of H2S. The cultivation of the Chromatiaceae family species is difficult and it is complicated to obtain isolated colonies. Some of them appear on agar medium after 2–4 weeks of cultivation. The colonies of purple sulfur bacteria on Van Niel’s agar medium are demonstrated in Figure 1. The bacteria Lamprocystis sp. have been cultivated under anaerobic conditions at light intensity 500–700 lux. The purple sulfur bacteria, especially the species of Lamprocystis genus are interesting to study, because they can form big asymmetric conglomerates in the water environment and hence the reason for presenting the growth of their colonies below. 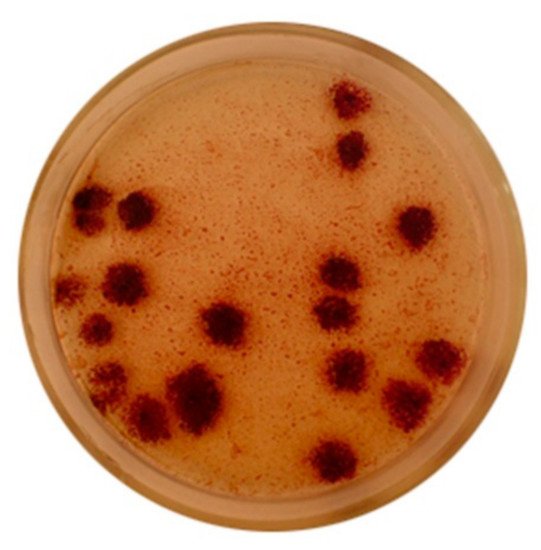 Figure 1. The colonies of purple sulfur bacteria of Lamprocystis genus [11].

Members of the Chlorobiaceae family—sometimes referred to as green sulfur bacteria—are a phylogenetically compact and isolated group of bacteria, characterized by the ability to use reduced sulfur compounds or molecular hydrogen as an electron donor for anoxygenic photosynthesis. Another important cytological feature is the presence of elemental sulfur granules, which are stored outside of the cells by the representatives of Chlorobiaceae (cf. members of the Chromatiaceae). Microorganisms of this family are immobile, Gram-negative bacteria, whom may either be spherical, oval or rod-shaped. Some members have gas vacuoles to allow for displacement in the water column. The light intensity is more than 150 lux. All species contain special light-harvesting complexes called chlorosomes on the inside of the cytoplasmic membrane. These complexes contain bacteriochlorophylls specific for the family Chlorobiaceae, more specifically bacteriochlorophyll c or d in green species and bacteriochlorophyll e in brown species [4]. The size of these light-harvesting complexes is much bigger than that of the Chromatiaceae family, which allows members of the Chlorobiaceae family to grow at light intensities (25–80 lux) [2].
All species of the Chlorobiaceae family discovered so far live in aquatic environments and the majority of bacteria are mesophilic. The most common habitats include freshwater lakes, lagoons, fjords, seas and marine sediments. The only documented exception is Chlorobium tepidum, a thermophilic species isolated from sulfur springs, capable of growing at temperatures between 45–55 °C [26]. Because bacteria of the Chlorobiaceae family require anaerobic conditions for growth, a source of reduced sulfur compounds and light, they can only grow in a small area of overlap between opposing gradients of sulfur and light compounds, usually near the bottom or in the upper few millimeters of sediment. In these areas, the growth of a layer of bacteria of the family Chlorobiaceae growing under one or more layers of bacteria of the family Chromatiaceae is observed. This coexistence is especially relevant because Chlorobiaceae require less light intensity than Chromatiaceae, have a higher affinity for H2S as the most common source of reduced sulfur, and have less energy to maintain cell function [27]. In addition, layers of bacteria of the Chromatiaceae family protect Chlorobiaceae from O2, to which they have almost no tolerance. In return, they can provide extracellular elemental sulfur that reacts abiotically with sulfides to form polysulfides, which may be used immediately by members of the Chromatiaceae family. This syntropy has been observed, for example, among representatives of Chlorobium limicola and Chromatium vinosum [28]. Different representatives of Chlorobiaceae can form colonies of different shapes, often also forming so-called phototrophic consortia, communities of green sulfur bacteria with chemotrophic bacteria. These consortia are considered to be the most perfect symbiotic prokaryotic groupings ever discovered [2].

Based on the general characteristics, representatives of the families Chlorobiaceae and Chromatiaceae were described, which differ in the number of representatives, the molecular and biochemical mechanism of anoxygenic photosynthesis and the photosynthetic apparatus. The universal electron donor for both families is reduced sulfur compounds, which are oxidized in the process of photosynthesis to elemental sulfur granules deposited inside (Chromatiaceae) or outside (Chlorobiaceae) cells. Another feature by which families are distinguished is the shape and size of the cells, the formation of cell aggregates, and also the color of the cell suspension, which is given by the pigment. The phylogeny and taxonomy of phototrophic microorganisms are based on their morphological, physiological and biochemical properties, as well as on the sequence analysis of the 16S rDNA gene and specific genes to their photosynthetic apparatus. For the Chromatiaceae, the taxonomic system corresponds to phylogenetic knowledge, while the system of the taxon Chlorobiaceae is still based on easily observable signs of classical taxonomy. Allochromatium vinosum is the most popular species for researchers of anoxygenic phototrophs and the most thoroughly studied at the genetic level.
Sulfur metabolism serves to oxidize reduced sulfur compounds to obtain electrons for anoxygenic photosynthesis and energy for bacterial growth. Various representatives may use various reduced sulfur compounds and oxidation mechanisms for this purpose. The mechanisms of sulfur oxidation are described for only a few representatives. Some of these mechanisms have not been experimentally demonstrated and are based only on similarities with other sulfur bacteria.
The photosynthetic apparatus of the families described above and their representatives differ; in particular, the photosynthetic pigments of the Chromatiaceae are located in the intracytoplasmic membranes. In contrast, in the taxon Chlorobiaceae, these pigments have specific structures called chlorosomes, which are located below the plasma membrane. Another difference between these families are pigments. Chromatiaceae possess Bchl a or b and the carotenoids, such as spirlloxanthine, rhodopine, lycopene, which stain cells from dark to light red. The Chlorobiaceae group contains Bchl c, d or e and the carotenoids chlorobactein, isorenieratin and β-carotene. The structure of chlorosome and light-harvesting complex 2 is relatively well described, while the structures of reaction centers and light-harvesting complex 1 are not. This is especially true for the family Chromatiaceae, which has not been studied in this respect at all, and most of the findings are based on similarities with other purple bacteria. Although we already know a lot about these families, further research is needed to fully understand all the processes, especially from structural biology and biochemistry. Another area that research could focus on is the application of already known mechanisms and products of these bacteria.
Today, these bacteria are only used in the treatment of wastewater and the production of biopolymers or H2, although other uses are already theoretically known. Examples are the production of carotenoids for industrial purposes or the possibility of using these bacteria to remove undesirable sulfur compounds from liquids or gases.