Nanowires of ferroelectric potassium niobate were grown by filling nanoporous templates of both sides opened anodic aluminum oxide (AAO) through radiofrequency vacuum sputtering for multisensor fabrication. The precise geometrical ordering of the AAO matrix led to a well-defined single-axis oriented wire-shaped material inside the pores. The sensing abilities of the samples were studied and analyzed in terms of piezoelectric and pyroelectric response and the results were compared for different lengths of the nanopores (nanotubes)—1.3 µm, 6.3 µm, and 10 µm. Based on scanning electron microscopy, elemental and microstructural analyses, as well as electrical measurements at bending and heating, the overall sensing performance of the devices was estimated. It was found that the produced membrane-type elements, consisting of potassium niobate grown in AAO template exhibited excellent piezoelectric response due to the increased specific area as compared to non-structured films, and could be further enhanced with the length of the nanowires. The piezoelectric voltage increased linearly with 16 mV per micrometer of nanowire’s length. At the same time, the pyroelectric voltage was found to be less sensitive to the length of the nanowires, changing its value at 400 nV/µm. This paper provides a simple and low-cost approach for nanostructuring ferroelectric oxides with multi-sensing application and serves as a base for further optimization of template-based nanostructured devices.

"Ferroelectric oxides are of great scientific interest as they are flexible in terms of properties such as tuning during deposition, technological compatibility with micro-/nanoelectromechanical systems (MEMS/NEMS) fabrication technology, and their applicability in energy harvesting or multisensor devices, due to their piezoelectric and pyroelectric response [1]. Ferroelectric nanowires could be incorporated into precise sensors, which have been found to exhibit better characteristics as compared to the bulk or thin-film devices that are not nanostructured. Especially attractive are these elements when using them as small area, low power sensors in portable electronics due to the possibility of being autonomous [2]. It is very important to find a way for effective filling of an AAO template with piezoelectric oxides, which are ceramic and are most often sputtered in a vacuum. 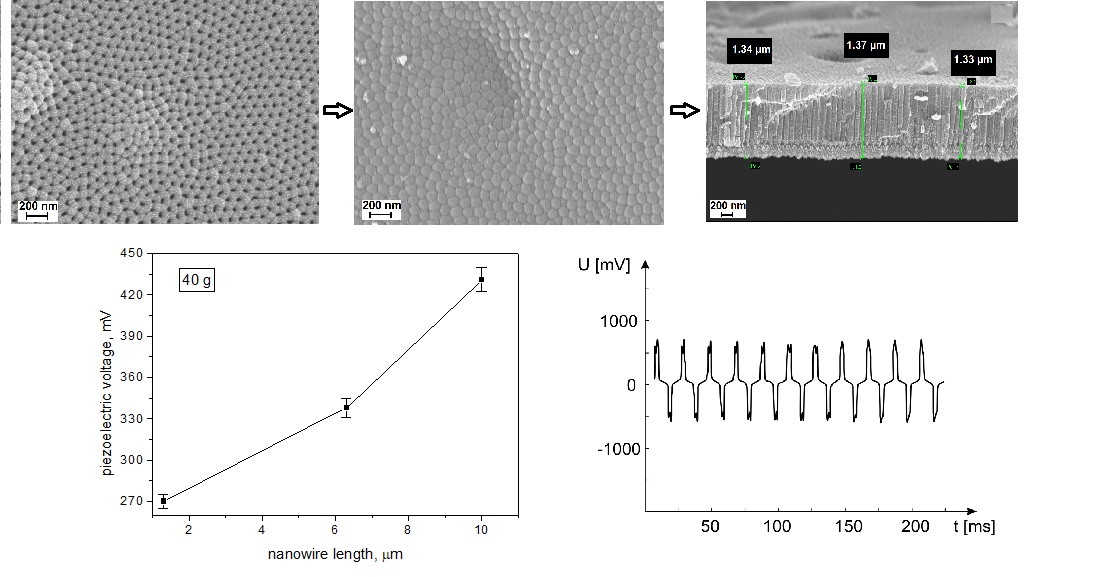 There is no sufficient information in the literature yet about the degree of filling of AAO nanotubes with sputtered piezoelectric oxide and how it affects the overall sensing performance. The produced in this way nanowires were densely arrayed, and good vertical alignment was found. The nanowires’ diameters of approximately 150 nm were rather identical in all types of samples, no matter the length. This is possible because template-assisted growth supports good regularity. It was found that the produced voltage is at a maximum around this frequency and the slightly decreases or deviates when the vibration frequency respectively decreases, or increases. RMS values were recorded, because the signal processing integrated circuits that further use the signals for amplification and filtration are not designed as peak detectors and work with RMS values. The sensor exhibited a response with excellent linearity with respect to the mass loading in all three cases. Increasing the length of the piezoelectric nanowire resulted in increasing the sensitivity in the studied range of load, as can be noted from the slopes of the characteristics. Structures with nanowire lengths of 1.3 µm showed 0.4 mV/g, nanowire lengths of 6.3 µm showed 1.7 mV/g, and nanowires lengths of 10 µm showed 2.3 mV/g (aspect ratio varies between 5 and 40). [1][2]" This is an extraction of the publication in Materials that I co-author (Aleksandrova et.al., Materials 2020, 13(7), 1777)