The cactus family is a diverse plant group, native to the Americas. Most of the species included have very variable stem shapes, with singular geometric forms, one of the characteristics why they are considered interesting or even bizarre plants. Cacti vegetative organs have adaptations to arid ecosystems, while possessing showy and beautiful flowers. This set of characteristics has made them very popular among specialists and amateurs. In this entry we address some of the generalities of cacti, focusing on the particular modifications present in their flowers. These peculiarities  make them an interesting model to study the development and evolution of these structures.

Cactaceae is a eudicot family within the order Caryophyllales and have been organized into five subfamilies: Leuenbergerioideae, Pereskioideae, Maihuenioideae, Opuntioideae and Cactoideae [1][2][3]; see Figure 1 for a simplified phylogeny. The family diverged quite recently, at approximately 35 Mya, placing Cactaceae as a late arrival in angiosperm history. It is thought that the majority of species diversification occurred during the late Miocene, ≈10–5 Mya [4]. Cactaceae comprises  between 1438 to 1870 species belonging to about 120 to 130 genera [5][6][7]. Its greatest species richness is concentrated primarily in Mexico, with secondary centers in the southwestern Andean region and in eastern Brazil [8]. Although cacti occur naturally only in the New World, the epiphytic cactus Rhipsalis baccifera, also occurs in tropical Africa, Madagascar and on islands of the Indian Ocean [7][9].

This succulent plants are distributed across a wide variety of ecosystems, from deserts to rainforests, and have a highly specialized vegetative axis where most species seem to lack leaves as these are highly reduced (microscopical) and modified (nonfunctional) leaves (reduced to spines). CAM photosynthesis (Crassulacean Acid Metabolism) is undertaken in  succulent stems that, in turn, exhibit a wide variety of shapes (cylinder, barrel shape, flattened) and sizes [4][5]. All species of the family bear characteristic spine clusters (i.e., areoles), representing short shoots with leaves transformed into spines already at the stage of primordia. This characteristic is a true synapomorphy of the entire family [7]. Stem structure and metabolic modifications are considered adaptations to hydric stress and aridity [4][10]. 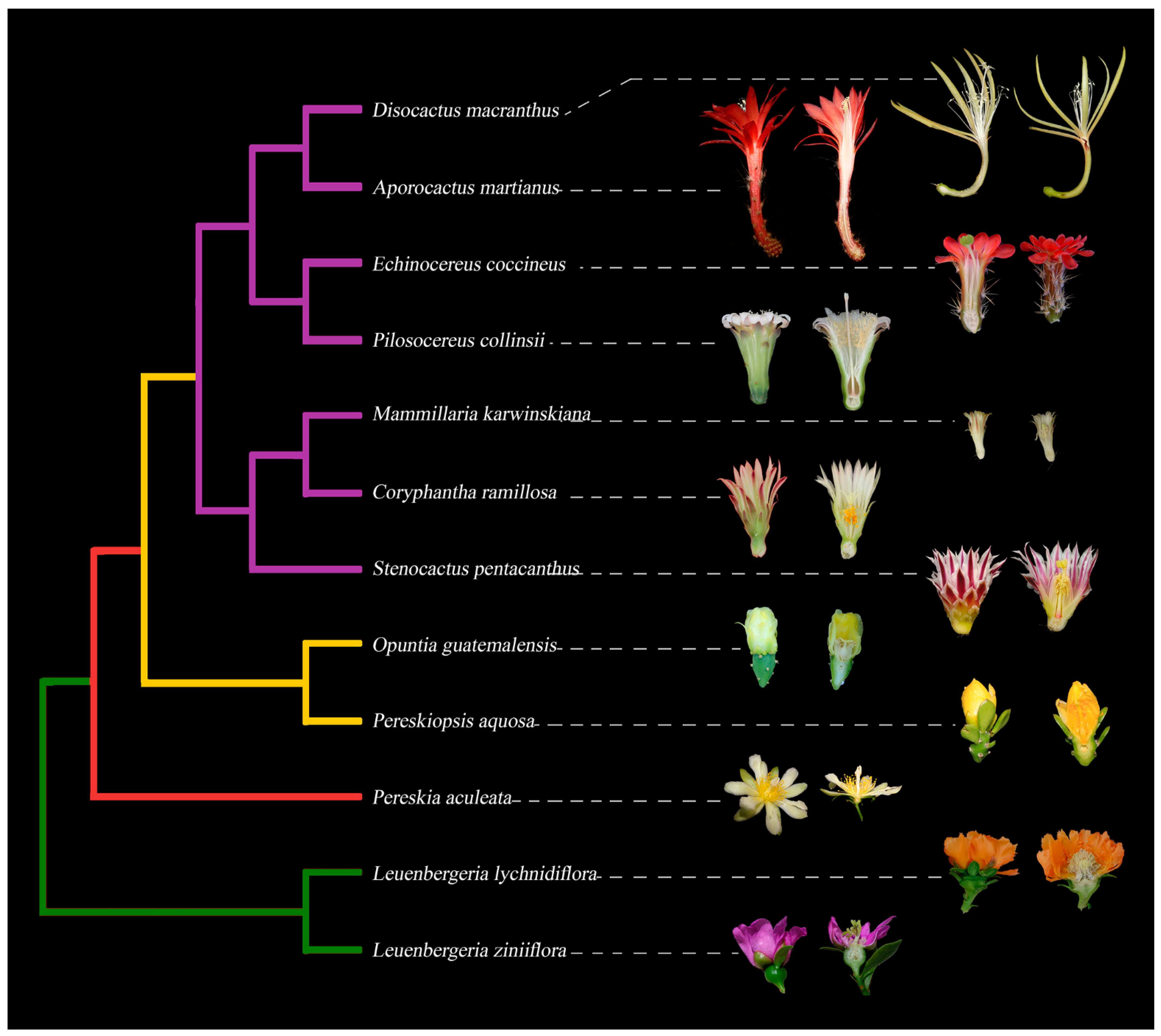 The Cactaceae are also quite diverse regarding plant habit, as  its members include trees, like the North American genus Cephalocereus, dwarfs like Blossfeldia liliputana, giants like Carnegiea gigantea, epiphytes like the Selenicereus species in North America or Schlumbergera in South America, as well as geophytes like the Mexican genus Ariocarpus [11]. Their growth form has been classified in: globose, cylindric, columnar and depressed globose [12].

The diversity of forms observed in cacti stems could be surpassed by floral diversity (Figure 2). Flowers with different colors, sizes, shapes, scents, number of elements of perigon, time of anthesis, etc., can be observed across the family. This floral diversity has been associated with different pollination syndromes, as some cacti are mostly pollinated by bees (i.e, Pereskia and Opuntia), others by bats (i.e, Pachycereus), birds (i.e, Disocactus, Cleistocactus) and sphingid moths (i.e, Epiphyllum) [13]. A mixed pollination syndrome -where more than one pollinator type can be involved- has also been observed in particular species within the family [13][14][15].

From a morphological perspective, flowers are defined as short shoots that carry reproductive organs. This term acquires particular meaning in Cactaceae, since the flower is interpreted as a branch with a perianth at the tip, with all reproductive organs embedded within the branch, thus giving way to a structure that has been called a “flower shoot” [11][16] because the ovary and the floral tube are covered by an axial tissue called the pericarpel [17]. 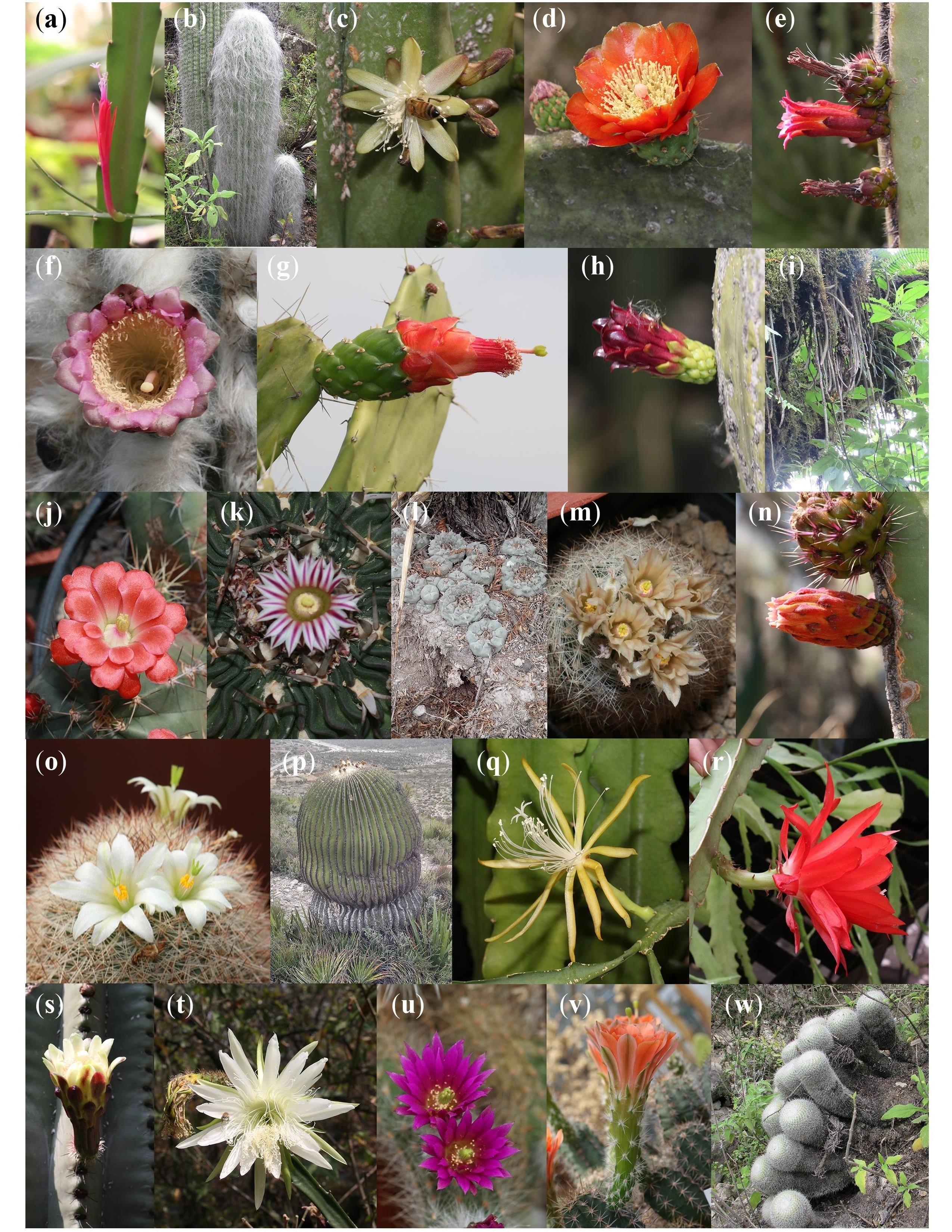 Given the diversity in form and rapid speciation process, the taxonomic classification in Cactaceae is quite complex, since many different names have been proposed for particular species and genera. To resolve these conflicts molecular phylogenetic analyses have been incorporated in taxonomic studies. Chloroplast DNA markers and some nuclear DNA markers have helped resolve taxonomic conflicts at  the species, genus, tribe, subfamily and family levels [18][19][8][20][21][22]. These phylogenetic studies support the evolutionary relationships within the family and with its outgroups [10]. Members of the cactus family have shown to be excellent model systems to understand evolutionary processes such as stress hydric adaptations [10]. However, cacti are also great model species to study the evolution of vegetative and reproductive unit  development as different clades possess unique  modifications in stem, leaves, roots and flower shoots.

According to Boke [23], the development of the so-called flower shoot in Cactaceae is similar to that in many other plants, and the most significant differences are observed in pistil and, in particular, carpel development. In Cactaceae, the androecium has numerous stamens (multistaminated), which initiate in a uniform and prominent ring primordium, on which the stamens arise in a centrifugal succession [17][24][25][26]. In the Caryophyllales, the multistaminate androecium presents morphological similarities to the Paeoniaceae subfamily and Dilleniidae subclass, and it is thus considered to be an ancestral feature in the Caryophyllales [27][26].

Generally, cacti ovaries develop multiple ovules [28], but Pereskia aculeata develops fewer than five ovules [27][29]. Ovule development in cacti exhibits similar characteristics to other members of the Caryophyllales, such as the hook-like shape of the carpels, which is also reported in Phytolacca, as well as the ovules’ primordium at the base of the ovary, such as that seen in Phytolacca and Tetragonia [17]. Another feature is the secondary augmentation of the ovules along the cross-zone, as in Trianthema and Mesembryanthemum [17]. The structure that has no homologs in other members of Caryophyllales is the pericarpel, a tissue that covers the ovary and seemingly is ontogenetically related to the stem. The ontogeny of this structure, together with the perianth, deserves further attention due to its likely complex evolution.

The term pericarpel was designated by Buxbaum [17] referring to the tissue which surrounds the ovary (carpels) in cacti. This tissue can be green and photosynthetic. In many cacti species like S. undatus (dragon fruit) the pericarpel is covered by bracts or scales, which can be considered as true leaves due to the presence of axillary buds [16]. The pericarpel is characterized by the presence of areoles (modified axillary buds) and spines (modified leaves), which are also present in cacti stems [11][23]. In Opuntia, the pericarpel bears stomata and areoles on its surface [30]. In addition, the presence of mucilaginous cells, druses and parenchyma cells resembles those present in the stem [60,61]. Based on these features, it has been suggested that the pericarpel has an axial origin; in other words, the pericarpel is a vegetative tissue originating from a vegetative meristem within the areole. Due to the axial–appendicular nature of the tissue, Mauseth [11][16] and most contemporary cacti specialists refer to this unique and remarkable structure as a “flower shoot”.

This concept of the flower shoot or the assembly between vegetative and floral tissues has been widely accepted in cacti [11][16][31]. Although the anatomical evidence supports the idea of an axial origin in the pericarpel, the homology of the pericarpel with the stem needs the conduction of formal studies, to determine the developmental and evolutionary origin of this structure. Therefore, we propose some hypotheses of the ontogenetic origin of the pericarpel and possible genes involved in the determination of this complex structure. The ontogeny of this structure, together with the perianth, deserves further attention due to its likely complex evolution.

Cactaceae represent a highly derived clade with an increased number of petaloid sepals [32], which are indeterminate and polymerous [28], developing in a centripetal order [17] with a spiral phyllotaxis [33]. Ronse De Craene [34] considered that the perianth in Cactaceae is formed by sepals and not by petals. Due to this, he denominated this structure as “petaloid sepals” and considered them nonhomologous to the petals present in species such as A. thaliana or A. majus. As we mentioned above, the perianth in the cactus family has been considered to have a gradation from bracts to sepals to petals [9][17] or bracts to tepals [17][35].This phenomenon has never been addressed in detail from a developmental or an ontogenetic perspective, but studying it would be instrumental to determine whether the perianth of a seemingly sepaloid origin present in this family is a product of a reduction in the petal whorl or if there is, in fact, a morphological gradation related to the differential expression of transcription factors directing perianth development that favors the interpretation of a transition from bracts to sepals and petals within a cactus flower (Figure 4).

The conspicuous characteristics observed in flower shoots of cacti, such as the presence of multiple perianth series with a possible sepaloid/bracteoid origin and the existence of a unique structure termed the pericarpel, make cacti flower shoots an exciting model to further our insights into the different developmental venues that underlie flower diversification in angiosperms.

The ABC model of flower development, proposed a generic mechanism for flower determination that has been a useful conceptual framework to test for the genetic basis of homologous organs in many angiosperms. Recent studies in a diverse set of flowering plants have suggested that several variations of the Arabidopsis/Antirrhinum model exist, particularly with respect to the perianth whorls [36][37][38][39]. In Cactaceae, the apparent lack of homology of perianth structures with respect to Arabidopsis, as well as the unique pericarpel structure, suggests that cacti could represent an additional variation on a theme involving synorganization between reproductive and vegetative tissues; this must be further investigated through comparative gene expression and developmental genetic studies that could help ascertain the conserved functions and unique variations present in a structure whose morphological and histological identities need further study.