Obesity, AR Signaling and BC

Obesity is an increasing health challenge and is recognized as a breast cancer risk factor. Although obesity-related breast cancer mechanisms are not fully understood, this association has been linked to impaired hormone secretion by the dysfunctional obese adipose tissue (hyperplasic and hypertrophic adipocytes). Among these hormones, altered production of androgens and adipokines is observed, and both, are independently associated with breast cancer development.

Breast cancer (BC) is the leading cause of death from cancer in women worldwide [1]. Furthermore, obesity is currently viewed as a major global health challenge and has been confirmed by the International Agency for Research on Cancer as a BC risk factor [2]. Although the mechanisms implicated in this association are not well understood, alterations in the production of sex hormones and changes in secretion of bioactive peptides (adipokines) from adipose tissue have been linked as biological processes usually altered during cancer development [3][4].

The pathogenesis of BC involves interactions between malignant cells and the mammary microenvironment, and therefore the tumor phenotype may be regulated by not only endocrine but also paracrine signals in the surrounding stromal tissue, which is mainly formed by adipocytes in BC. Elucidating these processes have allowed multiple mechanisms linking obesity with BC initiation and progression to be suggested. Among them, one indicates that hypertrophic adipocytes can trigger extracellular matrix (ECM) remodeling through the secretion of matrix metalloproteinases and increased expression of collagen biogenesis enzymes [5]. The high degree of adipose tissue ECM plasticity also promotes angiogenesis and hypoxic states, which are crucial phenomena related to the release of pro-inflammatory cytokines (e.g NF-κB and HIF-1α), cell growth and tumor survival in BC [6][7] (Figure 1). 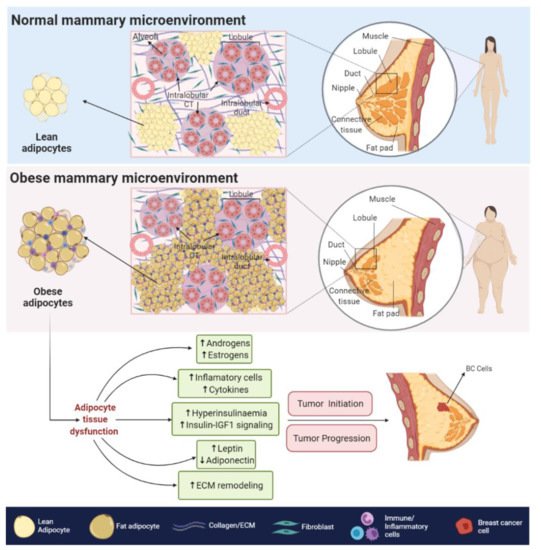 Figure 1. Normal vs. obese mammary microenvironment. Altered biological processes and production of ASFs are observed in obesity and are associated with BC development. CT—connective tissue; ECM—extracellular matrix.

The obesity-related hypoxic and inflammatory state is also associated with a decreased response to insulin and insulin-like growth factors (IGFs) signaling, leading to insulin resistance and hyperinsulinemia [8]. In BC cells, higher levels of insulin and IGFs signaling, promote the overstimulation of MAPK and PI3K/AKT pathways [9], both of which are related to increased cell proliferation, survival [10], angiogenesis [11], migration and epithelial to mesenchymal transition (EMT) [12].

3. AR Signaling and BC

AR signaling it is recognized as a master regulator of gene programs associated with a wide variety of biological processes including reproduction, differentiation, cell proliferation, apoptosis, inflammation, metabolism and homeostasis [13]. Androgens and AR employ two main mechanisms in order to exert their functions: (i) dimerization and nuclear translocation of the ligand-stimulated AR that promotes AR–DNA interactions on androgen response elements (AREs) of its target genes [14], and (ii) a non-genomic signaling/action, where androgens can directly activate GPCRs or even regulate the binding of ligand-stimulated AR to cytoplasmic and membrane-bound proteins. Both processes result in the consequent activation of second messengers (e.g., c-SRC) that may induce classical signal transduction cascades [15] (Figure 2). 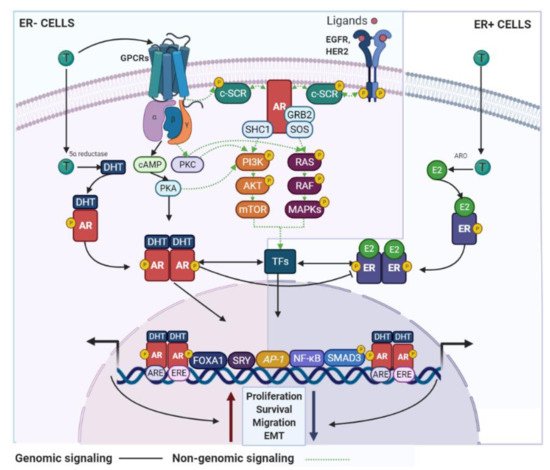 Figure 2. AR signaling in BC cells. AR use genomic and non-genomic mechanisms that can regulate BC development. These signaling pathways are associated with inhibitory or stimulatory effects on the BC cell growth and are dependent of the ER status. GPCR—G protein-coupled receptors; SHC1—SHC adaptor protein 1; SOS—SOS Ras/Rac guanine nucleotide exchange factor; ARO—aromatase.

Different reports have shown that DHEA, DHEA-S, 4-dione and their derivates, can influence the proliferative capacity of breast epithelial cells [16][17]. Furthermore, endogenous aromatization of T (to produce E2) or DHT treatment stimulates the growth of ER+ and ER− BC cell lines [18][19][20]. The same pro-tumorigenic effect was also observed for 4-dione and androstenediol in different BC models [21]. However, some authors reported that androgens, such as 4-dione, DHT and even T, inhibit the proliferation of both ER+ and ER− BC cells [22][23]. Of note, by accurately quantifying steroid hormones, Moon et al. confirmed that the androgens mentioned above are most abundant in BC tumors but show a large variation among patients [24]. This finding, together with the fact that the molecular mechanisms by which androgens control biological processes are not completely known and that the age of menarche and menopause is variable among patients [25], explain the contrasting data reported and more importantly highlight the need for additional basic and functional research to clarify this topic.

4. Obesity, AR Signaling and BC

4.1. Adipokines and the AR: Potential Links in BC

Although it has been reported that postmenopausal obese women have elevated circulating or mammary adipose tissue androgens levels compared with lean women, some studies have found inconsistent results [26]. Therefore, AR signaling modulation cannot be entirely explained by the discrepancy in androgens levels between obese and lean individuals. Among other factors regulating AR signaling, the adipokine IL-6 has been shown to sensitize ER+ and ER− BC cells to T, as the expression of the AR and its target gene FKBP5, were significantly increased. Bioinformatic analyses further demonstrated that AR and FKBP5 expression were higher in ER+ BC cases with increased IL-6 levels [26]. To the best of our knowledge, direct associations between the AR signaling pathway and important adipokines, such as ADPN and LEP, have not been yet reported in BC cells, but similarly to IL-6, their action mechanisms lead us to believe that functional interaction among them and AR, cannot be ruled out.

Most studies indicate that AR signaling plays a positive role in ER+ BC prognoses by blocking ER function. In this context, ADPN has been reported to prevent androgens aromatization [27], which involves increased levels of androgenic hormones in mammary tissue, AR overstimulation and increased inhibition of the ER signaling. Therefore, the decreased levels of ADPN, observed in obesity and cancer, may favor ER-driven BC progression by reducing the activation of the AR signaling. In ER− tumors, in which AR activation is associated with sustained growth, low ADPN levels may decrease the inhibition of the AR signaling, thereby maintaining the proliferative status of this BC subtype (Figure 3). 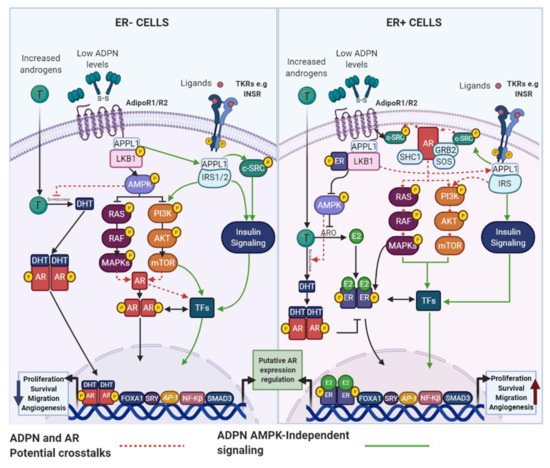 Figure 3. Potential links between ADPN and AR signaling. ADPN and the AR activate common signaling pathways and the crosstalk between them may be involved in regulating BC development, that is dependent on the ER status. INSR—insulin receptor; SRY—sex determining region Y.

Although it has been reported that androgens can modulate LEP expression in adipocytes [28], the effects of LEP on AR signaling in normal and malignant mammary epithelial cells have not been described. However, several studies have confirmed that increased levels of LEP and AR are found in obese-postmenopausal BC cases [7][29][30][31][26] and both have been identified as oncogenic factors that use similar signaling pathways. Therefore, a functional crosstalk among them cannot be excluded. The activation of non-genomic AR mechanisms by either Ob-R or HER2 would promote the oncogenic signaling of each other (Figure 4). 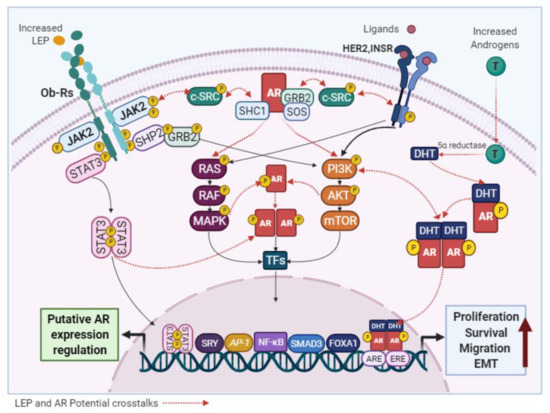 Figure 4. Potential links between LEP and AR signaling. LEP and the AR activate common signaling pathways and the crosstalk between them, may be responsible for the pro-stimulatory effects of LEP observed in BC cells.

To better understand how modified levels of ADPT, LEP, and AR influences BC development and progression, improved in vitro (e.g., co-culture experiments) and in vivo (e.g., tissues or cell lines xenograft specimens) experimental obesity models are required to study their interactions. These approaches will allow the evaluation of not only the degree to which the adipokines and the AR promote activation or inactivation of each other, but also whether their coordinated actions can modulate the biological processes that they are involved in. Because the epidemiological data are inconsistent, regarding the association of obesity with hormone receptor expression, menopausal status and BC subtypes, it will be interesting to clarify the relationship between lifestyles and clinical associations. To address this topic, further epidemiological studies with a larger number of included patients are needed. Additionally, the assessment of potential correlations among adipokines with androgen levels or AR status will be useful to establish their influence on BC prognosis.Clearly, obesity is a biological variable that merits consideration regarding the therapeutic strategies used to manage BC. Accordingly, and because of the modifiable nature of obesity, the most recommendable approach must be to promote lifestyle changes (in pre- and postmenopausal women) to achieve a healthy weight to prevent cancer development and even improve BC treatment efficacy. In line with our literature review, it is logical to assume that drugs targeting ADPN, LEP and even adipokines less studied as PGRN, require a deeper evaluation on their use in BC management. However, regarding AR, clinical trial results indicate that antiandrogen therapies may be effective and needed for AR+ TNBC patients, especially for LAR subtypes or even non-LAR with AR-weak positivity. Furthermore, although AR inhibition seems not to be widely effective in ER+ patients, focus need to be put in the identification of luminal tumors where AR levels are higher respect to ER levels. Preclinical and clinical research suggest that these tumors, as well as AR+ HER2-Enriched BC subtypes, are more dependent on androgen signaling. Therefore, additional studies using antiandrogen therapies, alone or in combination with other strategies, should be considered as an important medicinal target, that in the future, will allow to obtain significant clinical benefits for patients with different BC subtypes.