End-of-life vehicle is a vehicle that has reached the end of its useful life and requires proper treatment.

The reuse and recycling of end-of-life vehicles (ELVs) has made these vehicles a vital source of secondary raw materials for use in industry [1]. This helps in closing the sustainable resources loop and decreases the demand for primary raw materials. In the wake of the regulations for the recycling of ELVs through the 2000 European Union Directive (EU Directive), many countries have implemented similar policies, with efficiencies varying from country to country [2][3]. The EU Directive on ELVs considers the environmentally friendly dismantling of ELVs, the methods for recycling, and also has clear targets for the reuse, recovery, and recycling of ELVs and their components [3]. According to the EU Directive 2000/53/EC (the ELV Directive), vehicle manufacturers are required to minimize the use of such hazardous materials as mercury, lead, hexavalent chromium, and cadmium in the production of vehicles [3][4]. In addition, the EU member states are required to set up ELV collection systems and transfer these ELVs to established authorized treatment facilities. This directive is designed to reduce contamination in the environment and to curb emissions, as well as to facilitate recycling and reduce the need for the proper disposal of these hazardous substances [4].

Some EU member states have made significant advances implementing ELV recycling measures. According to a report by the United States Environmental Protection Agency, the producer responsibility scheme in Sweden, a pioneer in ELV recycling in Europe, requires vehicle manufacturers to collect ELVs at no cost to the vehicle owner, and also to establish a management system [5]. Also, the Dutch automobile industry established the Auto Recycling Netherland (ARN) company for the collection of scrap cars, management of ELV dismantling and recycling, by partnering with vehicle dismantling companies [6]. This company is financed through the collection of waste disposal fees as part of the vehicle registration process. It was also reported that, approved ELV centers in each prefecture in France, are responsible for ELV recycling and issuing a certificate of destruction to the ELV holders [7]. In addition, each vehicle manufacturer must establish a network of authorized ELV collection and distribution centers across the country.

According to the United Nations Conference on Trade and Development, and the United Nations World Economic Situation Prospects, country classification, Cameroon, Kenya, Nigeria, Egypt, India, Malaysia, Mexico, South Africa, are listed as developing countries [8][9]. Due to the low incomes and poor public transport infrastructure, most developing countries import second-hand vehicles [10]. Since many of these second-hand vehicles are barely roadworthy when they arrive in the country, and they are then driven on poorly maintained roads, many of them reach the end of their useful lives after a short period of use. In Kenya, ELVs are stockpiled at police station yards, despite the potential for these unclaimed stockpiled ELVs to be utilized as sources of secondary materials through recycling [11]. In Egypt, financial incentives are being offered to the owners of automobiles in a national program to promote ELV scrapping and recycling [12]. Through this program, many older taxis have been replaced with new vehicles. However, the Central Bank restricted access to foreign exchange to prevent the further devaluation of the Egyptian pound, resulting in a downturn in businesses and other economic activities in the country [13]. In Central African countries like Cameroon, little attention is given to recycling and waste management [14]. In such countries, vehicles are abandoned or disposed of illegally, and the dismantling of these vehicles is undertaken by the informal sector.

The reprocessing of the materials in ELVs requires the vehicles to be collected, to be depolluted, and dismantled, the materials to be sorted and shredded before being thermochemically processed, and the disposal of some of the material [18][19]. A flowchart for the environmentally sound process of recycling ELVs is provided in Figure 1 below, where processes are in plain shapes and outcomes in grey shapes. 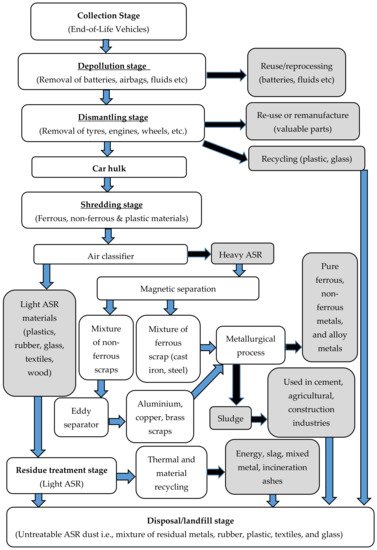 The SWOT analysis of strengths per country is shown in Figure 2. In this case, a higher rating indicates that the country is in a stronger position with regard to the recycling of ELVs. As vehicles are manufactured in India and Mexico, they have been rated 2 for this category. Also, Malaysia and South Africa have been rated 1.5 for this category, because of the assembling of vehicles and manufacturing of vehicle components in these countries. Along with South Africa, these countries have higher ratings, at 1.3, for their vehicle registration systems, 1 for ELV legislation and ELV recycling, based on the infrastructure in place in these countries, and 1.5 for waste management. Egypt was also assigned a rating of 1.5 in response to its cash reward initiative for buying low emission cars. As can be seen in Figure 2, Nigeria, Kenya, and Cameroon were assigned low ratings. The strengths of developing countries classified as emerging economies, excluding Nigeria, were rated more highly than countries not considered to have emerging economies. 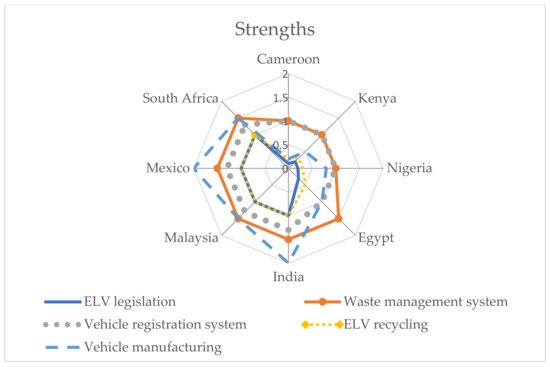 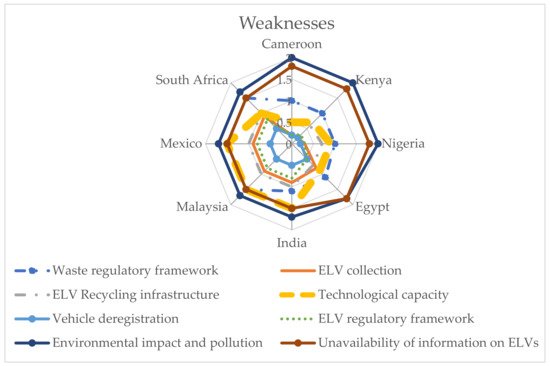 Here, the higher the rating, the greater the opportunity. Given its large population size, India was considered to have the highest opportunity rating, at 2 for its large market size and informal sector, and 1.5 for ELV parts recyclers. Egypt, Kenya, and Cameroon had low ratings of 0.8, and 0.7 for ELV parts recyclers, respectively. Since they have some companies engaging in the recycling of ELV parts, Nigeria, South Africa, Mexico, and Malaysia were considered to have greater opportunities. The potential market size was gauged by the population of the countries: India is seconded by Nigeria, and then Mexico, Egypt, South Africa, Kenya, Malaysia, and Cameroon. The scale of the informal sector was considered a valuable opportunity for all the countries, especially for India. Labor from the large informal sector could be used in a healthy and occupational safety approach, for deep dismantling of ELVs as a means to recover some high-quality materials such as glass, copper, batteries, aluminum, catalytic converters, and plastics [16]. The low cost of labor was considered a valuable opportunity for ELV investment in these countries. This is particularly true in Cameroon, where the cost of labor is the lowest. All countries were deemed to have considerable opportunities with regard to their potential for ELV recycling (Figure 4). 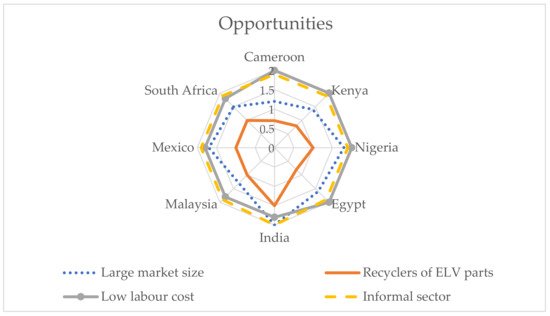 A higher rating equates to a higher threat. The lack of attention to ELV recycling by the governing authorities was the most problematic in Cameroon, Kenya, and Nigeria, followed by Egypt. Political and social instability was also high for Cameroon and Nigeria, and the difficulty of doing business was very high in Cameroon, Nigeria, and Egypt. Kenya followed these countries. Meanwhile, Mexico, Malaysia, and India were rated fairly for their lack of attention to ELV recycling, political and social instability, and difficulty of doing business. Malaysia was shown to have the most favorable business regulation with its low rate of difficulty of doing business. In the category of “Threats”, all countries were shown to be susceptible to specific threats identified ( Figure 5). 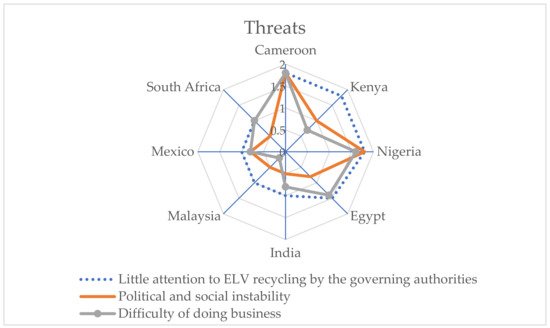