The 5th Generation District Heating and Cooling (5GDHC) networks aspire to connect to renewable energy sources[1], including geothermal sources[2]. Shallow geothermal sources are suitable for application regarding 5GDHC networks. They are generally defined by depth and encompass those energy achieved from the sources up to 400 m[3]. Sources from shallower depths are more practical to exploit as shown in figure 1. 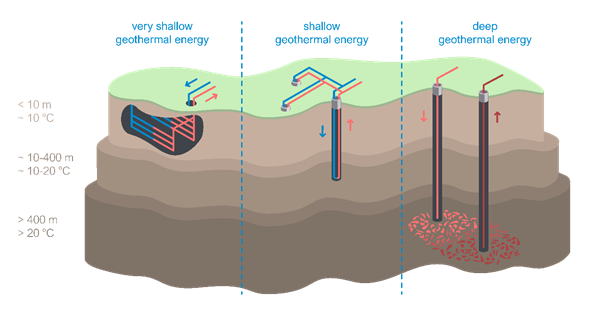 Very Shallow Geothermal Potentials (vSGPs) are those acquired by depth less than 10 m[5]. This depth range relevant for very shallow geothermal systems can be divided further into three layers: 0–3 m, 3–6 m, and 6–10 m[6], which differ by physical soil properties. The thermal properties of soil are the crucial parameters that affect heat extraction of the very shallow geothermal systems. These properties such as thermal conductivity, thermal diffusivity and heat capacity are strongly affected by the physical soil parameters - bulk density, water content, and soil texture defined by grain size distribution[7][8]. Climate factors, such as solar irradiation and precipitation, also have a certain influence on vSGP. Heat input from the earth’s interior (terrestrial heat flow) is negligible in the shallower soil layers. However, the influence of terrestrial heat flow becomes more important in the regeneration behavior of the soil with increasing depth, while the influence of solar irradiation is the opposite. 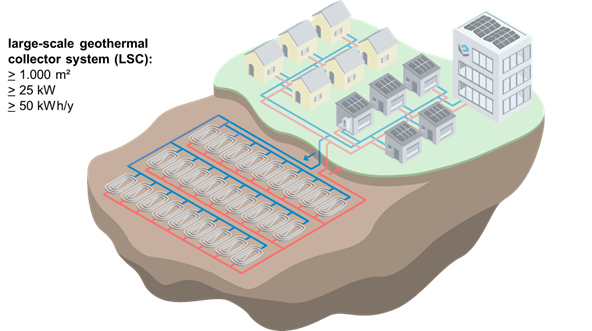 Large-scale geothermal collector systems differ from small systems, which are usually built for individual buildings, in their size and complexity. They can also be constructed in multiple horizontal layers. Due to the large number of pipelines and distribution shafts, the pressure loss must always be taken into account in detail and optimized for the system, so that all pipelines are evenly flown through with heat transfer medium and thus, an even heat extraction can be guaranteed. Within the large-scale geothermal collector system, the mutual influence of the individual collectors, which affects the heat extraction behavior, also comes into play. This requires more detailed planning, usually with the help of simulation programs.

Previous LSC’s usually consist of modular trench collectors, distribution shafts and an energy center. The advantage of modular trench collectors is that the pressure loss is known and stays the same for all modules within the system. In multilayer geothermal collector systems, the collector layers are usually connected separately. This means that every layer can be controlled separately during operation in order to guarantee targeted use of the advantages of the multi-layer system (seasonal heat and cold storage).

The advantage of the area development down to a depth of a few meters lies in the high regeneration potential through the climate, primarily the solar irradiation. Thus, over short periods of time, heat can be extracted from the soil to below the freezing point of the moisture present in the soil. In this way the heat energy, which is released in the phase transformation from water to ice, is tapped by the large-scale geothermal collector (LSC). The cooled soil is naturally regenerated again by solar irradiation and precipitation. Subsequently, the supplied regeneration heat can be extracted from the soil again in the next heating season. For natural regeneration through the climate, it is important that solar irradiation and precipitation can enter the soil as unhindered as possible.

It is almost impossible to cool the surrounding soil of a large geothermal single-layer collector at a depth of 1.5–2 m with the heat extraction for the heat supply of classical heat applications to such an extent that it cannot be regenerated again over the summer months at a location in temperate latitudes (four seasons, sufficient precipitation)[10]. The situation is different with heat baskets where a massive block of ice can form in the center that cannot be regenerated naturally, without the supply of thermal energy (usually in the form of waste heat). The same applies to multilayer collector systems (e.g., frozen soil storage), since the natural regeneration is “shut off” by solar irradiation and precipitation from the uppermost collector layer. However, this effect can also be exploited by deliberately generating excessive cooling of individual areas in order to provide cooling energy for residential buildings, office complexes or industrial applications and to use the heat released in the process of regeneration of the frozen areas[11].

Another advantage of large-scale geothermal collector systems is the low efficiency loss due to mutual influences. Efficiency losses may occur in the center of an LSC system, but regeneration is always ensured due to regeneration by the surface conditions (solar irradiation and precipitation) and only to a lesser extent by the terrestrial heat flow. Finally, it should be mentioned that the yield of geothermal collectors can be estimated accurately in advance since analyses of the upper soil layers can be carried out easily and at a low cost[7].

The main disadvantage of the very Shallow Geothermal Potential (vSGP) to the shallow systems is that their heat potential is subject to seasonal fluctuations, which means that the lowest natural geothermal potential is available in winter. Geothermal systems using the vSGP tap the soil all around the plant, which is why the area demand is often higher than the demand for other geothermal systems.

A large-scale geothermal collector (LSC) system is in constant competition or even in combination with other sustainable forms of heat supply such as ground heat exchangers, solar thermal energy, biomass or waste heat sources (industrial waste heat, wastewater heat, etc.). A large-scale geothermal collector is a good choice, especially if the overall system can be operated at a low temperature level via 5th Generation District Heating and Cooling (5GDHC) and not every building can have its own heat source, e.g., due to space constraints. If larger open areas are available during the development of the building area, an LSC can be considered. It can be placed, for example, below a rainwater retention basin, below sports fields, in compensation areas or in agricultural areas, in order to enable dual use of the areas. If the large-scale geothermal collector is operated via 5GDHC, it can provide both heating and cooling energy for the settlement.

The drilling of borehole heat exchanger systems is usually subject to special legal approval requirements, which are checked in advance. In some countries it may be prohibited to develop a vertical heat exchanger via a borehole for reasons of groundwater protection or due to mining law requirements. In the case of large-scale geothermal collector systems, requirements under licensing law must also be checked. However, the requirements are usually much less stringent and can be met. Thus, the development of settlements with regenerative low-temperature heat can usually be carried out in areas with a special legal situation.

A large-scale geothermal collector can act as an intermediate storage unit in a 5GDHC. Low-temperature waste heat from industrial processes or from a wastewater heat exchanger can also be integrated. Seasonal load peaks, both in generation and consumption, can be temporarily stored within an LSC and then provided as needed.