The dried stigma of the plant Crocus sativus L., (CS) commonly known as saffron, are used in traditional medicine for various purposes.

Crocus sativus L. (CS) (saffron), is a perennial herb and a member of the Iridaceae family, of genus Crocus, the line of Liliaceae. This plant is cultivated in a number of countries such as Azerbaijan, China, France, Greece, Egypt, India, Iran, Israel, Italy, Mexico, Morocco, Spain and Turkey. The spice saffron is the end product of this plant. Saffron, in filaments, is the dried dark-red stigmas of CS flower. The weight of a single stigma is circa 2 mg and each flower has three stigmata; 150.000 flowers must be thoroughly selected separately to gain 1 kg of spice. Saffron has a characteristic color, taste and smell. From ancient to modern times the history of saffron is full of applications. It is widely utilized as a perfume, as a spice for flavoring and staining food and drink preparations. The most common way to consume saffron is still to mix it with food or to add it to any hot or warm drink [1][2]. Additionally, saffron is commonly utilized in traditional medicine, as a beneficial agent for the therapy of various pathologies of the cardiovascular, respiratory, gastrointestinal and nervous system For review see [3].

The prevailing non-volatile components of the saffron are crocins, crocetin, safranal picrocrocin and flavonoids (querectin and kaempferol) [1]. The coloring components of saffron are crocins (C44H64O24), which are unusual water-soluble carotenoids (glycosyl esters of crocetin). The major component is a digentiobiosyl ester of crocetin (C44H64O24, 8,8’-diapo-Ψ,Ψ’-carotenedioic acid bis (6-0-β-d-glucopyranosyl-β-d-glucopyranosyl) ester). Safranal (C10H14O, 2,6,6-trimethyl-1,3-cyclohexadiene-1- carboxaldehyde), which is responsible for the characteristic aroma of saffron is a monoterpene aldehyde. The principal bitter-tasting substance is picrocrocin a glycoside of safranal (C16H26O7, 4-(β-d-glucopyranosyloxy)-2,6,6-trimethyl-1-cyclohexene-1- carboxaldehyde) [4][5][6].

In Figure 1 the molecular structures of CS and its constituent crocins, picrocrocin and safranal are illustrated. 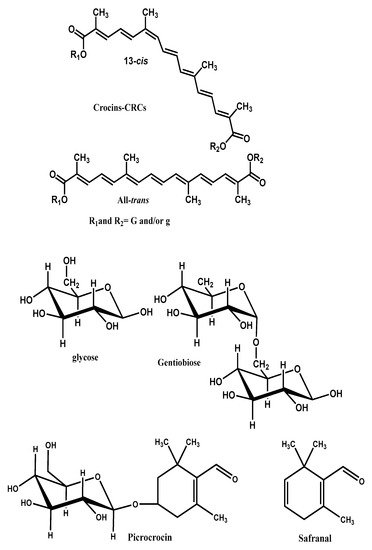 3. Pharmacology of CS and Its Bioactive Components

Based on a conspicuous number of preclinical and clinical data an exciting pharmacological profile of saffron and its bioactive ingredients is turning up.

3.1. Effects of CS and Its Constituents on Non-Neurological/Neuropsychiatric Pathologies

In a series of preclinical in vitro and in vivo studies the anti-cancer, anti-nociceptive and anti-inflammatory properties of saffron have been revealed. Additionally, it has been reported that CS and its bioactive ingredients reduced atherosclerosis and hepatotoxicity, diminish hyperlipidemia, display a protective action on myocardial injury and consistently reduce blood pressure [3][7][8].

As a whole, what emerges from these preclinical findings is that CS and its active components appear to express a beneficial action in preclinical models of different non-neurological/neuropsychiatric pathologies. Until now, however, there is a lack of clinical results validating the therapeutic efficiency of saffron observed in the above-mentioned preclinical pathological models. Thus, clinical studies should be designed and conducted in order to properly address this important issue.

3.2. Effects of CS and Its Constituents on Pathologies of The Central Nervous System

In a series of preclinical studies, the anticonvulsant properties of the aqueous and ethanolic extracts of CS and safranal have been observed and. Specifically, it has been demonstrated that CS extracts and safranal counteracted pentylenetetrazol-induced seizures in mice and rats and these effects seem to be mediated by their interaction with the GABAergic and opioids systems [9][10]. Further, both saffron and its active components were found to be protective in preclinical models of Parkinson’s disease (PD) and cerebral ischemia [11][12][13][14].

The efficacy of saffron and crocins to attenuate memory impairments in preclinical models associated with Alzheimer’s disease (AD), cerebral injuries, or schizophrenia is well documented For a review, see [15]. The outcome of clinical trials designed to examine the efficiency of saffron in alleviating memory problems, a common feature of AD, proposes that the effects exerted by CS on cognition, although modest, were similar to those displayed by the reference molecules donepezil and memantine. Importantly, in all human studies conducted, treatment with saffron, in contrast with donepezil and memantine, did not induce noticeable undesired effects [16].

Intensive preclinical research revealed a consistent antidepressant-like effect of saffron and its major constituents crocins and safranal [17]. This antidepressant-like effect of saffron observed in rodents was corroborated by clinical findings. Studies carried out in humans evidenced the efficacy of saffron in the therapy of mild-to-moderate depression [18][19]. In this context, it has been reported that saffron attenuated sexual malfunction in both males and females which was caused by the challenge with the selective serotonin re-uptake inhibitor (SSRI) antidepressant agent fluoxetine [20][21].

Up to now, few studies have been conducted aiming to investigate the potential anti-anxiety effect of CS and its components. In spite of the scant number of studies (preclinical and clinical), the results reported appear promising. Further research is mandatory in order to fully elucidate and establish the anxiolytic profile of saffron and its bioactive components. For review, please see [22].

Similarly, the outcome of preclinical research indicates the potential antipsychotic properties of crocins. Consistent research is required, however, aiming to fully elucidate this important issue. For review, please see [Molecules, 2021, 26, 1237].

Pharmacokinetic studies revealed that crocins, following oral administration, are not absorbed in the gastrointestinal tract (GIT) but are hydrolyzed to crocetin and in this form are absorbed in the GIT [23][24]. Crocetin is the active metabolite among which crocins exert their beneficial actions. Crocetin reaches the blood circulation and is found to be relatively quickly distributed in all tissues of the human body [25] can be partially conjugated with mono and diglucuronides in the GIT and in the liver [26]. A recent report demonstrated, however, that after oral application also crocins can be absorbed through GIT with poorer bioavailability compared to crocetin [27]. As a whole, either crocins or crocetin when applied orally, display low stability, poor absorption and low bioavailability [28]. Reportedly in this context, it has been evidenced that intraperitoneal or intravenous rather oral administration of saffron and its active components might provide higher levels of absorption and bioavailability [27][29]. In particular, Zhang and colleagues have indicated that intravenous application of crocins in rats did not reveal the presence of crocetin in plasma but solely crocins were detected, eliciting thus that hepatic metabolism of crocins would be insignificant [27]. Further studies are required, however, aiming to clarify this important issue.Interestingly, it has been shown that crocins despite their high hydrophilic profile, similarly to crocetine [30][31], can cross the blood–brain barrier (BBB) and reach the central nervous system [29]. Concerning safranal, it can be hypothesized that might be able to penetrate the BBB since in a series of studies its anticonvulsant and antidepressant properties have been revealed [9][10][17].Toxicological investigations performed in rodents that have received saffron extracts shown that the hematological and the biochemical parameters of the animals were not altered by treatment with saffron and remained at physiological levels [32]. In this context, it has been reported that the oral LD50 of CS was 20.7 g/kg when was delivered as a decoction in mice [33]. Further research confirmed the good safety profile of CS and its ingredients. Specifically, it has been observed that acute treatment of mice with saffron (up to 3 g, either orally (p.o.) or intraperitoneally (i.p.)) and repeated with crocin (15–180 mg/kg, i.p.) did not affect a series of biochemical, hematological and pathological markers recorded [34].The outline of human studies confirmed the safe profile of CS extracts and crocin observed in preclinical experiments. In a double-blind, placebo-controlled study, carried out on healthy volunteers, repeated challenge with saffron (200–400 mg/day, for seven consecutive days) did not induce appreciable abnormalities. It caused only some minor consistency clinical and laboratory parameter changes such as hypotension, reduced platelets and bleeding time and increased creatinine and blood urea nitrogen levels [35].In agreement with the above, are the findings of another clinical trial conducted on healthy participants who received 20 mg/day of crocin for 30 consecutive days. Treatment with crocin did not produce any alteration of various hematological, biochemical, hormonal and urinary parameters recorded [36]. Finally, the challenge with very high doses of saffron (1.2–2 g) in healthy volunteers caused nausea, diarrhea, vomiting, and bleeding [37]. As a whole, saffron and its main bioactive components can be considered as safe natural products displaying very low toxicity.