Purple rice is recognized as a source of natural anthocyanin compounds among health-conscious consumers who employ rice as their staple food. Anthocyanin is one of the major antioxidant compounds that protect against the reactive oxygen species (ROS) that cause cellular damage in plants and animals, including humans.

Anthocyanins have been demonstrated to reduce the risks of serious diseases such as cancer and obesity, and the compounds have antiviral, anti-inflammatory, and anti-skin aging effects [1][2][3][4][5][6]. In plants, although their function is not completely understood, the major role of anthocyanins has been reported as protecting against free radicals during physiological metabolism; in particular, anthocyanin can alleviate cell damage when plants are grown under biotic and abiotic stresses [7]. Therefore, consumption of naturally synthesized anthocyanin from plants for the benefit of human health can help reduce the risk of several major diseases.
Rice is one of the world’s major staple food crops, consumed by more than half of the world’s population along with crops such as wheat, maize, and potato; over 90% of the rice production areas and consumption amounts are recorded in Asia [8][9]. At least 175 countries and territories consume rice; the overall consumption is high in the rice-consuming countries, ranging from 100 to 200 kg of paddy rice per person per year according to the FAO. This could be one of the reasons why many international programs aimed at boosting human nutrition, e.g., the harvest plus biofortification with high zinc, iron, iodine, and selenium, are focused on rice crops [10]. Moreover, it is interesting to observe that among the staple food crops, rice is recognized as potentially containing high amounts of antioxidant compounds such as anthocyanin, especially in pigmented rice varieties with black (purple) and red pericarp color [11] (Figure 1). The purple rice is highly valued, particularly among the health-conscious consumers as a functional compound for human health among everyday sources of carbohydrate [12]. In other staple food crops, anthocyanin has been reported in purple maize, a variety that is rarely consumed in comparison with other non-staple food crops such as Brassica, Solanaceous species, and some edible flowers [13][14][15][16]. Additionally, anthocyanin can be directly taken from the concentrate in capsules for convenience, but this can be quite expensive [17][18]. Therefore, purple rice is an advantageous option for anthocyanin intake, especially when dealing with a large number of rice consumers worldwide.

Figure 1. Characteristic rice kernels with non-pericarp color (BB 3 CMU), purple (KJ CMU 107) and red (YMCB 3 CMU) pericarp color.
The anthocyanin-rich rice grains have been recognized as excellent sources of natural and safe food colorants [19][20][21]. Synthetic colorants can be harmful to humans and the environment via allergic and toxic reactions [22]; this can raise the demand for naturally pigmented rice such as purple rice that contains high concentrations of anthocyanin. Thus, purple rice not only provides enough anthocyanin to fulfill the growing interest but also can increase the value of rice products. There are numerous rice varieties containing anthocyanins, but only some are accepted as commercial varieties due to yield potential, cooking quality, and other functional properties that may be less acceptable.

Rice is the dominant cereal and staple food in many countries. Whilst non-pigmented rice (no pericarp color) is widely consumed throughout the world, pigmented rice varieties, e.g., purple rice, are also gaining interest in many regions. Purple rice is traditionally cultivated in Asian countries such as China, Japan, Korea, Thailand, Laos, Vietnam, Indonesia, India, Sri Lanka, and Nepal [23][24][25][26] as well as in other regions and countries including Brazil [27] In Asian regions, it has been established as a component of the traditional pharmacopoeia [28]. For example, traditional medicine in China uses pigmented rice to prevent anemia and to improve blood circulation, kidney function, and eyesight [29], while black porridge rice is given to aid recovery of broken bones [23]. Recently, Asian purple rice has attracted attention in the international rice market; at the same time, some new pigmented rice varieties have been bred and adapted to cultivation in other countries such as Italy, France, Russia, and Australia [30][31][32][33]. These events confirm that the worldwide demand for pigmented rice is increasing. Although Thai purple rice is currently produced on a very small scale compared with white rice, the export demand is expanding in various international markets. In fact, the export quantity has been fairly stable during 2017 to 2020, with an average of 11,762 tons annually, but the economic value has increased from 1423 to 1805 USD/MT according to the OAE (Figure 2a,b). Meanwhile, a higher market price trend for purple rice has been observed compared to other rice types including the premium fragrant rice type (Hom Mali rice) (Figure 2c) (computed from data in OAE, 2020) [34]. Additionally, the high value of purple rice has been largely provided by the online market, where the highest price for purple rice was recorded, especially organically produced rice with no chemical pesticides used (Siam Rice Export Company). Thus, the market trend for purple rice is heading in a good direction, especially when the production process can be precisely and safely controlled. 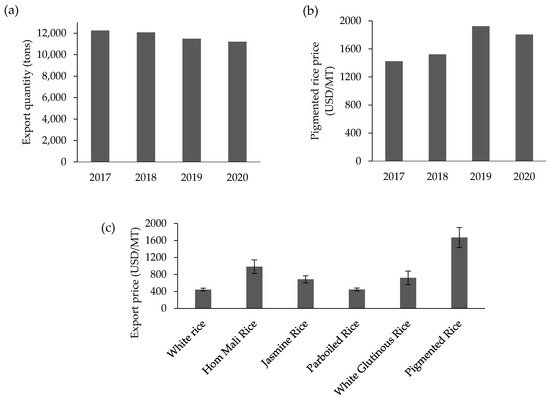 Figure 2. Thailand’s export quantity (a) and price (b) of pigmented rice and the average price of selected rice types (c) during 2017 to 2020. Source: drawn using data from OAE 2021.
According to the increasing of demand for purple rice, meeting a quality standard has become necessary before exportation (Table 1) [35]. Purple rice typically has an intrinsic color from deep purple to black; the appearance and uniformity of the color are used to initially classify the quality grade (by eye) between the two different groups of endosperm type: non-glutinous and glutinous endosperm. This is because the non-glutinous purple rice is often required to have a higher standard level due to the greater demand compared with the glutinous purple rice. Although, regarding quality grade, there is currently not a significant gap indicating the difference in domestic market price, quality involves attractiveness as judged by customers. The color segregation is controlled by many factors during cultivation such as sunlight (quality and duration), day and night temperature, moisture content, rainfall, water conditions, and nutrient availability in the soil [36][37][38]. The shade and color uniformity of purple rice provide opportunities for competitive products in the health food market. However, unlike the common white rice, the price of quality grade purple rice for export has not been officially provided; discussing the reasonable value can encourage farmers and entrepreneurs to produce rice and rice products that reach maximum quality. Deeper studies of selection of rice varieties, practical management, and processing have implications on quantity and quality of purple rice, and this should be considered when the consumer’s interest is considered.
Table 1. Thailand’s export quality standard specifications for pigmented rice.