Regular exercise/physical activity is beneficial for the health of an individual and lowers the risk of getting different diseases, including cancer. How exactly exercise results in these health benefits is not known. Recent studies suggest that the molecule irisin released by muscles into the blood stream after exercise may be responsible for these effects.

Recent evidence indicates that the exercising muscle releases proteins called myokines into the bloodstream, allowing them to be delivered to different tissues in the body and exert the beneficial effects of exercise (Figure 1). Prominent myokines produced by skeletal muscle are interleukins-6 and -15 (IL-6 and IL-15), oncostatin, myostatin, brain-derived neurotrophic factor (BDNF) and irisin [1][2][3]. 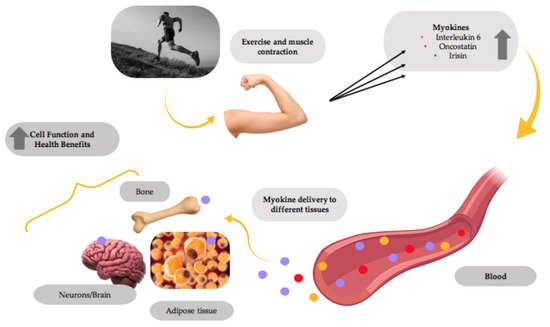 Figure 1. Myokines mediate the health benefits of exercise. Muscle contractions induce the production and release of myokines by muscle, which are delivered through the blood circulation to different tissues in the body, improving the overall tissue function and providing health benefits. This figure was created with BioRender.com.

Irisin is part of the fibronectin type III domain containing 5 (FNDC5) protein. The human FNDC5 gene has a different start codon (ATA) compared to other species such as the mouse or rat (ATG) [4], and this ATA start codon is associated with a low expression efficiency [5].

Muscle cells produce fibronectin type III domain containing 5 (FNDC5), a protein whose destination is to be localized to the plasma membrane. The original FNDC5 protein contains an N-terminal signal sequence (Figure 2), which targets it to the plasma membrane, and is subsequently cleaved, as is true for all signal peptide sequences of plasma membrane proteins. The N-terminal signal sequence is followed by a fibronectin type III domain (FNIII), a transmembrane domain and a c-terminal tail corresponding to the cytosolic region of the protein (Figure 2). Irisin is produced following the proteolytic cleavage of the mature FNDC5 protein (Figure 2). 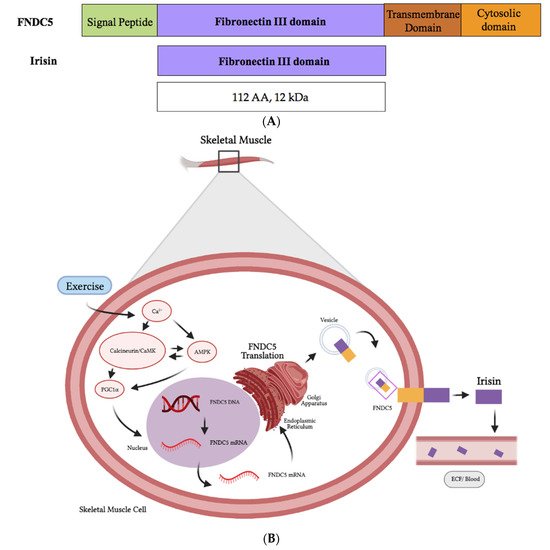 Figure 2. Schematic representation of FNDC5 and the irisin protein domains (A). The synthesis and release of irisin by muscle cells is induced by exercise (B). Figure 2B was created with BioRender.com.

The measurements indicated that, in a sedentary individual, the irisin levels are at approximately 3.6 ng/mL, while the levels found in individuals after exercise are much higher at ~4.3 ng/mL [6]. Similarly, Moreno et al. [7] found higher circulating irisin levels in physically active individuals compared to sedentary subjects.

Overall, the existing data provided evidence that irisin is released in response to exercise. The half-life of irisin was examined in vivo by Kim et al. in mice injected with recombinant irisin for 6 days and was found to be less than an hour [8]. If these data extend to humans, and the half-life of endogenously produced irisin in humans is also less than an hour, they could contribute to the variability seen in the blood/circulating irisin levels. Apart from exercise, cold exposure and various drugs such as statins, metformin and phytochemicals/polyphenols such as resveratrol and citrus flavonoids, as well as diet, could all influence the blood irisin levels [9].

The tissue distribution and clearance of irisin in vivo has not been extensively studied. Lv et al. administered radioactively labelled irisin by injection in mice and utilized single-photon emission computerized tomography (SPECT)/CT imagining to examine irisin distribution in different tissues. The highest level of irisin was found in the gallbladder, followed by the liver and kidneys [10]. It was also found that the clearance of irisin is through the hepato-biliary and the renal system [10].

2.3. Irisin receptor and Mechanism of Action in Target Tissues

Currently, there is no irisin receptor identified. Recent studies have shown that, in osteocytes, irisin binds to the αV/β5 integrin receptor complex and activates the focal adhesion kinase (FAK), a well-established downstream signaling molecule of a αV/β5 integrin receptor, while the use of αV/β5 integrin receptor inhibitors blocked the irisin effects [8]. Similarly, using the immunofluorescence analysis, it was shown in vitro and in vivo that irisin binds to the integrin αVβ5 receptor on gut epithelial cells [11][12]. Wei et al. [13] found that the use of integrin (αV) inhibitors (RGD peptide, Echistain) blocked the irisin effects on hepatocytes (L02), proving further evidence of irisin signaling via integrin receptor binding. These recent studies provided the initial evidence of the binding of irisin to αVβ5 integrin complexes. However, it is possible that irisin does not bind solely on this complex and may bind to other members of integrins or other membrane receptors. Further studies are needed in the future for a better understanding of irisin receptors.

3. Role of Irisin in Cancer

3.1. Role of Irisin in Cancer: In Vitro Evidence

Limited studies (presented below) have examined the direct effects of irisin on cancer cells. The exposure of endometrial (KLE and RL95-2), colon (HT2 and, MCA38), thyroid (SW579 and BHP7) and esophageal (OE13 and OE33) cancer cells to physiological (5–10 nmol/L) and high physiological/pharmacological (50–100 nmol/L) concentrations of irisin did not affect cell adhesion and colony formation [14] (Table 1). These data indicated no changes in the proliferation and malignant potential of cancer cells within irisin treatment.

Table 1. Role of irisin in cancer: in vitro evidence.

Overall, the evidence from the majority of the available in vitro studies indicates the inhibition of proliferation, survival, migration and invasion and the induction of apoptosis of cancer cells exposed to irisin (Table 1). These anticancer effects of irisin were associated with the inhibition of PI3K, Akt, mTOR, STAT3 and NF-κB and activation of AMPK (Figure 3). It is not known if the inhibition of PI3K, Akt, BCL-2, NF-kB, STAT3 and mTOR by irisin is direct or indirect. It is possible that irisin directly inhibits them or indirectly modulates the upstream regulators. For example, the inhibition of mTOR may be due to the activation of the cellular energy sensor AMPK, an upstream regulator (inhibitor) of mTOR. 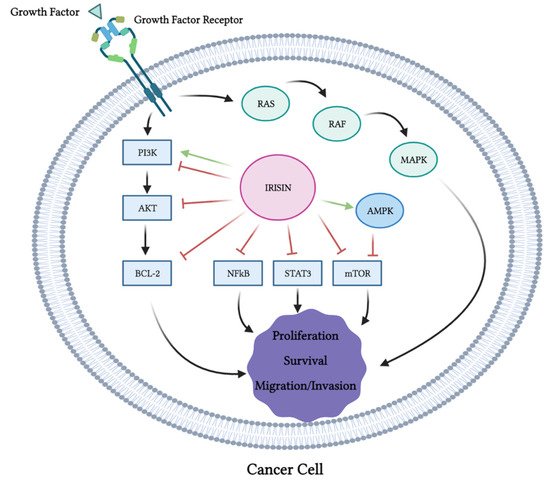 Figure 3. Effects of irisin on cancer cell signaling molecules. PI3K, Akt, Bcl-2, NF-κB, STAT3 and mTOR were all inhibited by irisin. Irisin activated AMPK and MAPK. This figure is based on the data of the studies mentioned in the in vitro section and Table 1. The figure was created with BioRender.com.

The levels of cleaved caspase 3, 7 and PARP, all markers of apoptosis, were enhanced with the irisin treatment (Figure 3). It is important to note that one study showed no effects of irisin on cancer cell proliferation [14], while another study utilizing hepatocellular carcinoma cells showed increased proliferation, migration and invasion with irisin treatment [21] that was associated with activation of the PI3K/Akt signaling pathway. The existence of these contradictory evidence point to the requirement of more research and in-depth investigation of the biological effects and the role of irisin in tissue homeostasis. It may also suggest that the effects of irisin are cell- and tissue-specific.

3.2. Role of Irisin in Cancer: In Vivo Evidence

Altay et al. examined the levels of irisin in control BALB/c mice and in mice with gastric tumors induced by the administration of N-nitroso-N-methylurea (MNU) [27] (Table 2). The serum levels of the markers of inflammation and cachectic factors were elevated in mice with induced cancer compared to the control animals. FNDC5 and the cachectic factor zinc-α-2 glycoprotein were not detected in gastric tissues in any animal group.

Table 2. Role of Irisin in cancer: in vivo evidence from animal studies.

Aydin et al. examined the levels of irisin in various cancer tissues by IHC utilizing an irisin antibody and compared them to the levels found in control healthy tissues [39] (Table 4). All the tissues were from patients who received no chemotherapy or radiotherapy before their operations. Irisin was found in most of the tissues examined (brain, esophageal, stomach, liver, colon and pancreas), with significantly increased levels seen in gastrointestinal cancer and grade II astrocytoma tissues compared to the control [39].

The majority of the available in vitro studies indicate the inhibition of cancer cell proliferation, survival and migration with irisin treatment. However, the effects of irisin in human and animal cells in culture may be different from the effects seen in vivo. Studies from breast [28][29], hepatocellular [31], colorectal [33], renal [34], prostate [36] and gastric [37] cancer patients suggest that the serum irisin levels may serve as a diagnostic marker. Some in vivo studies have found increased irisin levels in various cancerous tissues, while others have shown the opposite. Furthermore, it is not clear whether the altered expression of irisin seen in tumor tissue is the cause of tumorigenesis or a compensatory mechanism to counteract tumorigenesis.

Currently, controversies exist surrounding the detection of the irisin gene and protein expression in tissues and hopefully these controversies will soon be resolved. Irisin expression in different cancer tissues should be studied extensively, and its role in tumorigenesis should be elucidated before irisin can be used for cancer diagnosis, prognosis and/or treatment. Clearly, more in vivo animal and human studies are required.