Angiogenesis is an active process, regulating new vessel growth, and is crucial for the survival and growth of tumours next to other complex factors in the tumour microenvironment. We present possible molecular imaging approaches for tumour vascularisation and vitality, focusing on radiopharmaceuticals (tracers). Molecular imaging in general has become an integrated part of cancer therapy, by bringing relevant insights on tumour angiogenic status.

Angiogenesis is an active process, which regulates the growth of new blood vessels from a pre-existing vascular bed and is crucial for any regenerative mechanisms and for the survival and growth of tumours. Under physiological conditions a fine-tuned regulation of pro- and anti-angiogenic factors expands the surrounding vascular network in the target tissue. However, in the case of solid cancers, there is a pathological misbalance in the favour of the pro-angiogenetic factors, which results in abnormal, leaky, new capillary formation, required for its rapid growth and metastasis [1]. Beyond its effects on tumour expansion, these immature capillaries facilitate tumour metastasis by providing an efficient route for the tumour cells to exit the primary site and enter the blood stream [2]. Therefore, pro-angiogenetic factors, including their respective receptors, are attractive targets in the molecular imaging of tumour vascularisation and vitality assessment.
Concentration gradient via diffusion may achieve a steady nutrient supply and waste product elimination only in tissues smaller than 2 mm in diameter. Henceforth, any tumour larger than this requires vascularisation for its subsequent growth. This is an important aspect, which is frequently overlooked, as both chemotherapy and imaging tracers that directly target the process of angiogenesis have a limited effect (if any) on primary tumours and metastases smaller than 2 mm. Thus, the detection capabilities of imaging probes targeting angiogenesis are restricted both by the spatial resolution of the scanner and by the tumour volume. Nonetheless, as most solid tumours are prone to acquire resistance to anti-angiogenic therapies [3][4], there is an unmet need for non-invasive targeted imaging of tumour vascularisation and vitality.
Computed tomography (CT) and magnetic resonance imaging (MRI) are in principle not ideal for assessing tumour angiogenesis. These techniques mainly evaluate parameters such as changes in tumour volume, morphology, or even tumour blood flow/blood volume and vascular permeability, but they cannot quantify changes in the tumour vasculature. However, there are significant advances being made, especially with MRI, that allow imaging of angiogenesis-correlated parameters. This is beyond the scope of the current review, but interesting applications may be found in the following reviews [5][6][7].
Molecular imaging, either via positron-emitting isotopes for imaging with PET or via single photon emitting isotopes for imaging with SPECT, makes use of radioactively labelled tracers that bind to specific targets. The technique of molecular imaging is significantly more sensitive compared to CT and MRI, allowing for the visualisation and even quantification of sub-nanomolar concentrations of targets. Both PET and SPECT imaging techniques rely on small amounts of “tracers”, which bind a specific molecular target. Both modalities comes with a long list of tracer parameters that need to be met, including good target to background ratio, fast clearance (preferably renal), suitable biodistribution, no toxicity, and high specificity for the specific target. Therefore, the field of molecular imaging is ever developing with improvements in the tracer, either via incremental improvements within a given class of compounds; or via “new” tracers that are used for targets that previously could not be detected.

As angiogenesis is a multi-factorial process, there are a multitude of potential targets for molecular imaging. These targets can be subdivided into direct targets (specific receptors on or near the cell that are directly related to angiogenesis) and indirect targets (glucose metabolism, hypoxia—which are only indirectly correlated with angiogenesis) (Table 1, Figure 1). 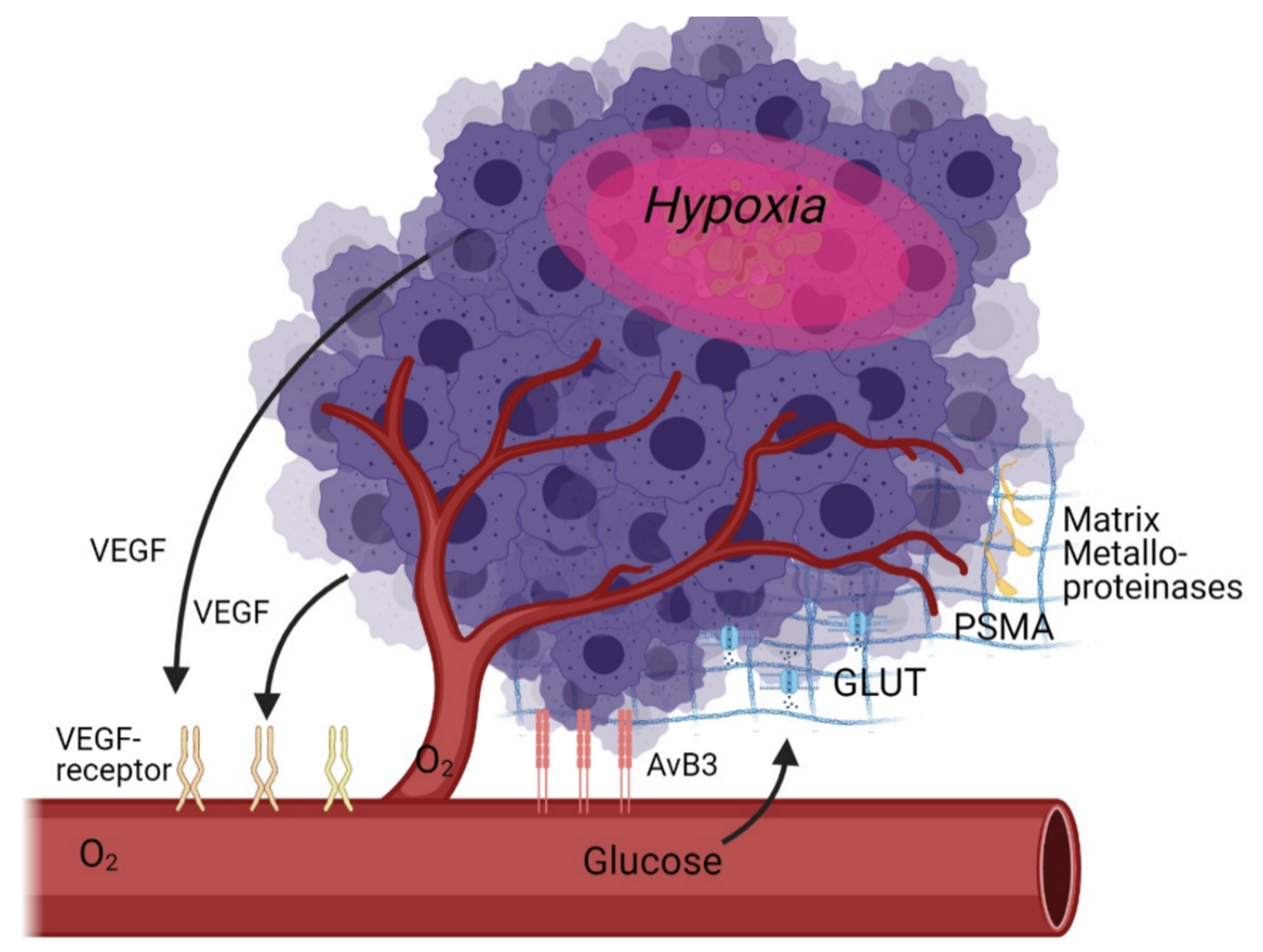 Figure 1. Schematic overview of angiogenesis targets in the tumour microenvironment as discussed in this review.
Table 1. Classification of the most promising tracers for angiogenesis imaging.
The discovery of VEGF has revolutionised the understanding of vasculogenesis and angiogenesis during embryogenesis and physiological homeostasis. It is the key mediator of angiogenesis and binds two VEGF receptors (VEGF receptor-1 and VEGF receptor-2), which are expressed on vascular endothelial cells [31][32]. It is up regulated by oncogene expression, a variety of growth factors and hypoxia. It is important to note that tumour vasculature formed in answer to VEGF influence is structurally and functionally abnormal: blood vessels are not organised into venules, arterioles, and capillaries, they are leaky and haemorrhagic.
Another key target for angiogenesis is integrins. The adhesive interaction of vascular endothelial cells is crucial in angiogenesis, with several adhesion molecules, including members of the integrin, cadherin, selectin, and immunoglobulin families as key effectors [33]. Integrins represent a family of cell-adhesion molecules crucial to cell-to-extracellular matrix and cell-to-cell interactions. Integrins are heterodimeric transmembrane glycoproteins composed of two non-covalently associated α and β subunits, the specific combination of these units determines signalling properties as well as binding affinity for ligands (and therefore tracers). Especially important are the αv integrins, which are overexpressed on the surface of endothelial cells during angiogenesis. Different types of integrins can also imply different metastatic progresses: Hoshino et al. report that a high content of exosomal integrin αvβ5 was associated with liver metastasis, whereas exosomal integrins α6β4 and α6β1 correlates with lung metastasis [34]. αvβ3 integrin is one of the most studied integrins as it represents a highly specific biomarker to distinguish new from mature capillaries, allowing vascular mapping of angiogenesis in tumours [35][36].
Outside of the cell, MMPs are a relatively new and interesting target. MMPs are a family of zinc-binding metalloproteinases that participate in the degradation of the extracellular matrix, including the tumour capsule, resulting in tumour metastasis or invasion of the surrounding tissues. Furthermore, MMPs promote tumour growth and spread through the capillary endothelium [37]. MMPs can also promote neovascularisation by assisting in the breakdown of the extracellular matrix surrounding epithelial cells, resulting in weakened cell–cell tight junctions and adhesive connections and eventually migration of these epithelial cells [38][39].
There are also indirect techniques to measure angiogenesis, namely Glucose Transporter (GLUT) expression and hypoxia imaging, or even the recently discovered prostate specific membrane antigen (PSMA). As hypoxia is one of the key driving elements of angiogenesis, it makes sense to target it as a pseudo-target for angiogenesis. The degree of hypoxia if a strong prognostic factor as it is inversely correlated to survival: oxygen-deprived cells are highly resistant to therapy including radio- and chemotherapy, and survival of such cells is the primary cause of disease relapse. It is currently not well understood to what degree hypoxia markers can be directly used to visualise angiogenesis, partly because of suboptimal tracers and partly because successful angiogenesis implies a reduction in hypoxia [40].
Several authors demonstrated a co-upregulation in the expression of glucose transporters (GLUTs) and VEGF during 12-, 18-, and 24 h of severe hypoxia in vivo (xenografts) and in vitro (cell cultures), suggesting a modulation of the glucose kinetics by angiogenesis-related genes [41][42]. As GLUTs can be targeted with a commonly used tracer ([18F]-FDG), it is certainly worthwhile to investigate GLUTs as an angiogenesis marker. PSMA, a target well known for visualising prostate cancer, also seems to play a role in angiogenesis in solid tumours [43].

Significant progress has been made over the past decade concerning molecular imaging in angiogenesis. While indirect imaging of angiogenesis using either [18F]-FDG or hypoxia-markers is not always strictly correlated to angiogenesis, they do have strong prognostic power in the clinical setting. Direct imaging with specific markers, targeting specific receptors on the cancer cells or the surrounding vasculature, are more tightly correlated to angiogenesis. Their clinical impact remains to be determined however, as there are a multitude of potentially useful tracers, both preclinical and clinical, but further research is needed to determine which of those will be translated to the clinical setting. In our opinion, the RGD family holds the most potential to enter clinical routine as a tracer for direct quantification of angiogenesis, by providing an improved assessment of tumour characteristics required for personalised therapy approaches.