Neurotransmitters are biochemical molecules that transmit a signal from a neuron across the synapse to a target cell, thus being essential to the function of the central and peripheral nervous system. Dopamine is one of the most important catecholamine neurotransmitters since it is involved in many functions of the human central nervous system, including motor control, reward, or reinforcement. It is of utmost importance to quantify the amount of dopamine since abnormal levels can cause a variety of medical and behavioral problems.

Dopamine is a neurotransmitter playing essential roles in the cardiovascular and central nervous systems. As such, high dopamine levels indicate cardiotoxicity leading to rapid heart rates, hypertension, and heart failure [1]. On the contrary, low levels of dopamine in the central nervous system are implicated as a major cause of several neurological diseases such as Parkinson’s disease, schizophrenia, Alzheimer’s disease, stress and depression [2]. Therefore, it is obvious that dopamine measurements are required to understand its biological functions and related biological processes and mechanisms. Analytical techniques such as enzyme assays, liquid chromatography, mass spectroscopy, or capillary electrophoresis are the main techniques used for measuring dopamine. If a technique such as high-performance liquid chromatography (HPLC) with tandem mass spectrometric (MS/MS) detection is a powerful technique for the quantitative determination of dopamine [3][4], its cost is high. That is why there is a real interest in developing specific and low-cost biosensors taking advantage of dopamine’s easiness to be oxidized at the surface of an electrode.
Moreover, electrochemical biosensors generate a fast and sensitive response, allow monitoring in real-time, and can be miniaturized enough to be implanted in living cells. However, several issues need to be resolved. First, biosensors must be able to give a sensitive response in the appropriate range of concentration (0.01–1 µM for a healthy individual and in the nanomolar range for patients with Parkinson’s disease). Second, the biosensors must be selective enough to discriminate dopamine from its interferents, such as ascorbic acid or uric acid, which undergo oxidation within the same potential window as dopamine.
The selectivity of the dopamine biosensor is especially important and challenging when studying real samples (human serum or blood) due to the complexity of the biological samples. Indeed, such matrix does not contain only commonly occurring interferents such as ascorbic acid or uric acid, but also other neurotransmitters and molecules. To perform electrochemical detection of dopamine in real samples, it is generally necessary to add a few steps to sample preparation to reduce the matrix effect [5][6]. For blood samples, centrifugation is necessary before dilution and analysis, while urine samples are only diluted before analysis. The extraction of analyte or interferents using selective modification materials can also be used to lessen the matrix effect. In addition, when biological samples such as cerebrally extracellular fluid are studied, extremely low volumes of the samples are available, and thus, it is necessary to handle them with utmost care. For such samples, the real-time in vivo analysis with miniaturized microelectrodes is preferable.
To overcome these difficulties, researchers are developing new sensing materials that can be deposited onto the surface of an electrode. These can, in turn, increase the electrocatalytic properties of the electrode to obtain a more sensitive and selective response to dopamine. The most popular strategies used for the modification of electrodes are: the deposition of nanomaterials acting as redox mediators; the deposition of compounds containing specific groups that can facilitate the charge transfer; the deposition of nanostructures with a high specific surface area to increase the sensitivity of the electrode.
The main goal of the current review is to summarize the recent studies of nanomaterial-modified electrodes that were proven to be effective for the electrochemical detection of dopamine with high sensitivity and in a selective manner. Of the various nanomaterials available, we focused on three classes of materials, i.e., metal and metal oxide nanomaterials, carbon nanomaterials (graphene and carbon nanotubes), and polymers (conducting polymers and molecularly imprinted polymers), which can all improve the electrocatalytic oxidation of dopamine, as briefly described in Figure 1. This review should not be considered exhaustive due to the very high number of papers published on this topic, but we tried to select the most representative articles to illustrate the main strategies used to develop operational electrochemical dopamine biosensors. 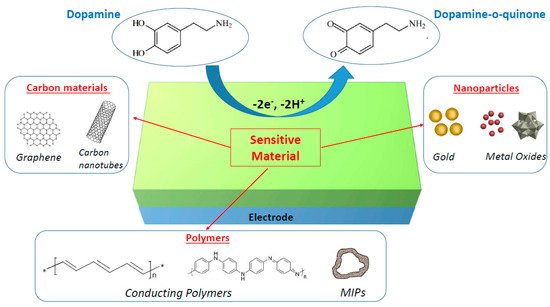 When target biomolecules are captured by a sensing material deposited on the working electrode of an electrochemical biosensor, an analytical measurable signal is generated (Figure 2A). In the case of dopamine, many electrochemical methods (e.g., amperometry, cyclic voltammetry, differential pulse voltammetry) have been developed since dopamine can be oxidized easily [7], leading to the formation of dopamine-o-quinone through a two-electron process [8]. The electrons released by dopamine during its oxidation generate currents that may be linearly dependent on the concentration of the electroactive dopamine biomolecules, thus enabling the quantification of these compounds. Electrochemical methods have many advantages for dopamine detection: the low cost of electrochemical instrumentation, the size of the electrodes that can be conveniently implanted in living cells, the short response time, and the capacity to monitor dopamine in real-time. However, the detection of dopamine via electrochemical methods can be difficult when dopamine co-exists with other redox-active biomolecules that can be oxidized at close oxidation potentials, such as ascorbic acid or uric acid. To overcome this problem and perform selective detection, many materials have been developed and used to obtain selective modified electrodes.

Figure 2. (A) Principles of dopamine electrochemical biosensors. (B) The typical voltammetric curve was obtained during the sensing of dopamine (DA) in the presence of ascorbic acid (AA) and uric acid (UA) interferents. (C) Typical evolution of the oxidation peak of dopamine as a function of dopamine concentration. (D) Typical calibration curve of dopamine.

In amperometric biosensors, the current produced during the oxidation or reduction of an electroactive biological element at a constant potential applied between a working electrode and a reference electrode is measured, providing specific quantitative analytical information [9][10][11]. These biosensors are inspired by the first amperometric biosensor developed by Clark in 1956, who fabricated an amperometric oxygen sensor producing a current proportional to the oxygen concentration when the potential was applied to a platinum electrode [12]. In the case of dopamine biosensors, a constant potential is applied, potential that is sufficient to oxidize dopamine to dopamine-o-quinone through a two-electron process. The current is proportional to the dopamine concentration over a more or less wide concentration range, thus allowing the quantification of the dopamine concentration in the sample [13][14][15]. However, amperometry is not selective since all electroactive compounds that can oxidize at the applied potential produce an amperometric response.

During cyclic voltammetry experiments, a current is produced by sweeping the potential applied between two electrodes over a range that is associated with the redox reaction of the analyte. This redox reaction generates a change in peak current that can be correlated to the concentration of the analyte, thus leading to specific quantitative analytical information [9][16][17]. This method has the advantage of providing both qualitative information deduced from the potential location of the current peak and quantitative information deduced from the intensity of the peak current.
For example, the oxidation of dopamine using cyclic voltammetry leads to an oxidation peak, which is characteristic of this biomolecule. By studying the evolution of the intensity of the oxidation peak present in the cyclic voltammograms for different dopamine concentrations, it is possible to draw calibration curves and quantify this compound (Figure 2C,D).
Fast-scan cyclic voltammetry (FSCV) is a derivative technique that can be used to address analytical challenges arising from biomedical needs to measure locally low concentrations of neurotransmitters [18][19]. With the FSCV technique, it is possible to perform real-time detection of dopamine on the subsecond time scale thanks to scan rates (100 V/s or faster) that are 1000-fold faster than traditional cyclic voltammetry [20]. FSCV can only be achieved at a microelectrode having a small-time constant for fast capacitive charging [21]. In addition, carbon-fiber microelectrodes are generally used since they have surface oxide functional groups that adsorb cations [22]. Recent progress has been done concerning waveform optimization, electrode development, and data analysis [23], which accelerated the research in the field of dopamine detection and monitoring.
The monitoring of dopamine by FSCV has been exhaustively described by Venton and Cao [24]. It consists of applying a holding cathodic potential of −0.4 V to the working carbon microelectrode to selectively preconcentrate cationic dopamine on the microelectrode surface. Then, a triangular waveform, with a fast-scan rate, is applied repeatedly to scan the electrode to a switching anodic potential of +1.3 V and back to oxidize dopamine and reduce dopamine-o-quinone. After that, the background current is subtracted out from the overall CV to get the background-subtracted CV, which has a unique shape for each electroactive compound.

Differential pulse voltammetry is a derivative of the linear sweep voltammetry technique with a series of regular voltage pulses superimposed on the potential linear sweep [25][26][27]. In DPV, a base potential value is chosen at which there is no faradaic reaction, and this potential is applied to the electrode. The base potential is increased between pulses with equal increments. The current is measured just before each potential change, and the current difference is plotted against the potential. Sampling the current immediately before the potential is modified reduces the effect of the charging current. In the linear sweep technique, an oxidation process leads to the formation of a wave in the voltammogram, but in the DPV technique, an oxidation process originates a peak. This sharper shape facilitates the interpretation of the voltammogram and renders DPV more accurate than linear voltammetry. This is particularly useful in the case of electrochemical biosensors since it is easier to discriminate the sharp peaks attributed to dopamine, ascorbic acid or uric acid when applying the DPV technique compared to the large waves obtained by linear voltammetry (Figure 2B).

The detection of dopamine in real-life applications is a promising and exciting area of research, as indicated by hundreds of publications on this topic. Electrochemical biosensors are a promising technique for the detection of dopamine or other neurotransmitters. In this review, we summarized recent studies of nanomaterial-modified electrodes for the detection of dopamine. In recent years, most of the studies were devoted to the preparation of new sensing materials to improve biosensor performances. Thus, various nanomaterials (e.g., metals, metal oxides, carbon materials, polymers, and a combination of these materials) were reported to be excellent in improving both the sensitivity and the selectivity of modified electrodes. Specifically, in the case of electrochemical detection, the nanomaterials showed their ability to facilitate electron transfer reactions on the electrode, improving the detection of unique oxidation peaks or significant currents.
Now, modified electrodes have proved that they can be useful for dopamine detection in standard conditions and exhibited detection limits in the picomolar range, as well as selectivity towards dopamine even in the presence of interferents. It can be considered that they have shown a grade of maturity good enough to implement them in real analytical applications. Thus, the technology must now move from standard conditions to biomedical and clinical applications and be implanted in point-of-care devices. The future of dopamine biosensors probably consists of the development of miniaturized systems or platforms (consisting of arrays of nanoelectrode sensors or field-effect transistors) that must be portable, non-invasive, cheap, wearable, and capable of reducing the time and frequency of sampling. Thanks to the recent advances in miniaturized system technologies, it can be expected that future electrochemical biosensors will be capable of performing localized measurements of dopamine levels from living neurons that will facilitate the discovery of new types of drugs and techniques, which will ultimately contribute to the treatment of various dopamine-related diseases, including Parkinson’s disease, schizophrenia, Alzheimer’s disease, stress, and depression.