Transient receptor potential (TRP) channels are improving their importance in different cancers, becoming suitable as promising candidates for precision medicine. In particular, this section will be focused on TRP importance in hematological malignancies.

Transient receptor potential (TRP) channels are a family of ion channels, belonging to voltage-gated superfamilies, with different physiological functions [1][2][3]. TRP channels are expressed in many organisms, from worms to mammals, and grouped in six subfamilies based on their amino acid sequence homology: canonical (TRPC), vanilloid (TRPV), melastatin (TRPM), ankyrin (TRPA), polycystic (TRPP), mucolipin (TRPML) (Figure 1) [4]. Most of TRPs are selective for cations and most of them are permeable to both monovalent cations, such as sodium (Na+), and divalent cations, such as magnesium (Mg2+) or calcium (Ca2+) [5]. Moreover, they can be activated by a variety of environmental stimuli such as temperature (as TRPV2), mechanical forces (as TRPA1), or plant-derived compounds such as menthol for TRPM8 or capsaicin (CPS) for TRPV1 (Table 1) [1][3][6]. 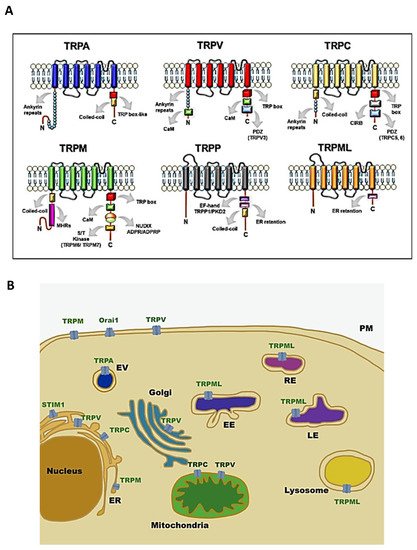 Figure 1. Structure and localisation of TRP channels: (A) structural domains and motifs in the N- and C- terminus of TRP channel subfamilies [7]; (B) intracellular localisation of TRP channel subfamilies and SOCE machinery. Abbreviations: TRPA, transient receptor potential ankyrin; TRPC, transient receptor potential canonical; TRPM, transient receptor potential melastatin; TRPML, transient receptor potential mucolipidin; TRPP, transient receptor potential polycystic; TRPV, transient receptor potential vanilloid; ER, endoplasmatic reticulum; EV, vesicle of exocytosis; EE, early endosome; RE, recycling endosome; LE, late endosome; PM, plasma membrane; STIM1, stromal interaction molecule 1; Orai1, calcium release-activated calcium channel protein 1.
Table 1. Environmental activating stimuli and calcium permeability characteristics of TRP channels.
Initially, it was thought that TRP channels were solely expressed on plasma membrane (PM) mediating cation entry, but many studies have demonstrated that almost all mammalian TRP channels are located in the intracellular vesicular membranes (Figure 1B). It is unclear whether TRPs are expressed in these compartments as intermediate biosynthetic pathways and then shuttled to their final location, or if they have a role as signal transducers and/or membrane trafficking regulators [26].
Above all, they are considered important Ca2+ selective ion channels (Table 1) which have been linked to countless physiological and pathological functions [27].
Indeed, calcium homeostasis shows a precise and fine regulation, and it constitutes the core of all cellular signals. Thus far, many studies have shown that cytosolic Ca2+ oscillations play a pivotal role in the carcinogenesis process. Tumour cells are able to remodel the Ca2+ signalling network and its disruption contributes to malignant phenotype development. The connection between Ca2+ signalling and cancer is an interesting field of study, and the emergent role of ion channels such as TRPs in regulating the Ca2+ network makes them promising targets for cancer treatment and care [27][28][29].

2. TRPs as Promising Diagnostic, Prognostic, and Therapeutic Markers in the Clinical Management of Haematological Malignancies

Haematological malignancies represent a mixed group of neoplasms generally divided into leukaemia and lymphoma, depending on their organs of origin. Leukaemia is based on the accumulation of immature cells by mainly affecting blood-forming cells in the bone marrow, and it is classified, according to the blood lineage, in myeloid (acute and chronic) and lymphoid (acute and chronic). Lymphoma is the neoplastic transformation of B and T lymphocytes derived from primary or secondary lymphoid organs and it is classified as non-Hodgkin and Hodgkin lymphoma [30][31].
The aim of this review is to collect and analyse the latest discoveries regarding the role of TRP channels in blood cancers starting from a previous work by Morelli et al., published in 2013 [32]. Papers are selected from 2013 up to 2021 and are outlined in Table 2 and in Table 3.
Table 2. Expression of TRP channels in leukaemia and lymphoma cell line.
It is now well accepted that alterations of TRP expression and functions are responsible for the impairment of cellular signalling pathways involved in cancer growth, metastasis, and chemoresistance [52]. In particular, dysregulations of TRPC, TRPM, and TRPV members have been mainly correlated with malignant growth and progression. For this reason, in recent years, many efforts have been spent to improve the knowledge about these channels and the ability to target them. Thus, they are considered promising tools to inhibit cancer progression and to ameliorate the diagnosis and overcome chemoresistance in cancer [27][53][54][55][56].
Interesting findings indicate and suggest that TRP channels could also be useful as diagnostic, prognostic, and therapeutic markers in the clinical management of haematological malignancies.
Table 3. Expression and functions of TRP channels in leukaemia and lymphoma patients.
In this regard, integrated methylome, transcriptome, and epigenetic analysis showed that the expression level of many genes is dysregulated in paediatric leukaemia, and among them, the presence of TRPC1, TRPC4, TRPC3, TRPM2, TRPM4, and TRPM8 also stands out. These TRP channels are repressed, and this indicates a reduced potential for cell–microenvironment interactions and apoptotic potential of the ALL cells [36][37]. In accordance with these data, the potential utility to add TRP as diagnostic tools is also confirmed by other studies. It has been found that TRPM4 is significantly overexpressed in diffuse large B-cell lymphoma (DLBCL), compared to normal germinal centre (GC) B cells and, in addition, it is more expressed in activated B-cell-like than in GC DLBCL [61]. Moreover, Hirai et al. demonstrated that TRPM8 positive neoplastic cells are mostly present in post-GC neoplasms but not in pre-GC or in the majority of GC neoplasms, suggesting TRPM8 as a marker to discriminate and diagnose reactive plasmablasts and mature B-neoplasms [60].
Finally, TRPM2 was found to be strongly upregulated in AML samples from patients with normal karyotypes or all AML mutational subgroups with respect to normal hematopoietic stem cells or common myeloid progenitor, suggesting the possibility to differentiate normal from neoplastic cells by using TRPM2 expression levels [47].
The potential prognostic impact of TRP channels in haematological malignancies has been recently highlighted. In DLBCL, the negativity of TRPM4 expression significantly correlated with better overall survival (OS) and progressive-free survival (PFS), compared with TRPM4 strong intensity. TRPM4 positivity was also associated with higher lactate dehydrogenase levels, higher Eastern Cooperative Oncology Group (ECOG) score, and stage III-IV. In addition, TRPM4-positive DLBCL patients treated with R-CHOP (cyclophosphamide, doxorubicin, vincristine, and prednisone) protocol displayed worse survival, consistent with its expression [61]. Moreover, a close relationship between TRPM8 and International Prognostic Index (IPI) scores was found in DLBCL patients, indicating that lower TRPM8 expression levels are associated with higher IPI scores [60].
In vivo studies underline the importance of developing new pharmacological approaches based on the targeting of TRP channels. In fact, mice injected with TRPM2-depleted leukaemia cells showed significantly reduced leukaemia, compared to controls, suggesting that these channels play an important role in leukemogenesis [47]. The targeting of TRP channels has been shown to affect leukaemia cells and the tumour microenvironment. It has been recently demonstrated that TRPV4, by acting as a volume receptor, is involved in bone marrow adipocyte remodelling in AML mice, and it is clear that the inhibition of this remodelling increases the survival in the AML mouse model [58].
Moreover, many in vitro studies, performed in patient-derived cells, demonstrated the ability of TRP-targeting therapy to inhibit cell proliferation and improve the effects of traditional chemotherapy in haematological malignancies. For instance, the TRPC3 channel blocker, Pyr3, enhances apoptosis induced by dexamethasone in ALL cells isolated from patients by altering calcium signalling, mitochondrial membrane potential, and ROS production [42]. In addition, the activation of TRPV1, by using the specific agonist RTX, reduced cell proliferation, blocked cell cycle, and increased apoptosis in T cells from ALL patients [35].
Obviously, further studies are necessary in order to develop and use drugs capable of modulating the TRP functions. However, interesting assumptions are gradually emerging. In fact, by molecular imaging methods, the in vivo potential of soricidin-derived peptides in targeting TRPV6-rich tumours has been evaluated [62]. In addition, an apoptosis-inducing TRPV1 nanoagonist containing semiconducting polymer nanoparticles (SPNs) as nanocarriers and CPS as the agonist has been developed to target TRPV1-positive cancer cells [41]. Finally, given that ongoing clinical trials specifically targeting TRPM4 have been approved in patients with stroke [63], it can be expected that, soon, other TRP-based therapeutic strategies may have an adequate safety profile and be applied in the field of cancer, including haematological malignancies.

Although TRP channels are found to be important in the carcinogenesis of many tumours so far, little is known about their involvement in leukaemia and lymphoma [32][54][56]. Findings gathered thus far demonstrate that TRPs display an oncogenic activity in haematological malignancies associated with alteration of their molecular expression profile. Given that targeting of TRPs could alter the signalling pathways associated with leukaemia, the evaluation of TRPs as promising biomarkers seems to be of particular interest in the diagnosis, prognosis, and/or treatment of haematological malignancies.
Taken together, these data suggest that attention should be focused on these channels, and increasing efforts should be spent on better characterising their role and function in blood disorders to provide further oncologic targets for upgrading precision medicine.